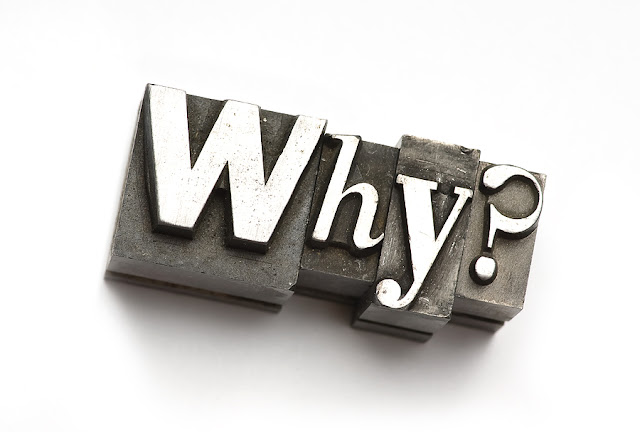 Why create?
Stick with me here, but I think it overlays why some walk toward, rather than away, from difficulty. From risk. From epic adventure.
George Herbert Leigh Mallory was asked a similar question, and his response is nearly as well known as his inherently epic climb that pushed, and pushed hard, against the boundary of the then possible: to reach the highest point on Earth. Ultimately, in 1924, during the third British expedition to Mount Everest that he took part in, Mallory and his climbing partner Andrew “Sandy” Irvine were last seen on the North-East ridge of Everest about 800 vertical feet from the 29,029′ summit. If they did indeed reach their goal of standing atop the world, we’ll never know.
Also unknown to many is why anyone would attempt such a daring and perilous feat like that back then, let alone today. It’s probably what prompted an interviewer’s query which resulted in Mallory’s famous, three word response.
I’ve pondered this penchant some have to climb, whether halfway around the globe or in one’s back yard, as is nearly literally the case if you are lucky enough to live in a place like Colorado Springs, recognized in 2009 by Outside Magazine for a host of reasons as the place to be.
If I wished to, I could close up this laptop (at 3:29 am), get dressed, hop in the car, and well before 5 am be halfway up the Incline, a mile-long, seemingly vertical “master Stairmaster” on the side of Pikes Peak. Well, more like a Stairmaster workout with a 50 lb pack on one’s back, followed by a three-mile ‘cool down’ on the treadmill, all while breathing through a straw. Definitely not for the faint of heart and/or of breath, but for my wife, Nan, it’s less like a workout with a view and more like mystifyingly ascending a highway to hell.

Part of the reason some gravitate toward the “painful sublime” is because modern life has been relatively tamed.
In some parts of the modern world, anyway. If I had lived just east of here in the Dust Bowl days, say, I doubt I’d be looking for any more adventure and difficulty than the harsh conditions I was already experiencing just trying to survive.
It was Sir Alfred Wills’ Wetterhorn climb, in 1854, that usually marks the beginning of the sport of mountaineering, and within just a few short years it had spread from London to most European countries, spread like the plague.

Again, I can’t see alpinism taking hold there during the height of the Black Plague, can you?

Witness my poor attempt at a Monty Python skit:

Michael Palin, dressed as a woman in rags, speaking in falsetto: “Where are you (cough) going, Albert?”

John Cleese, also in rags, donning a large sack over his shoulder: “Well, I…” (glancing at all of their children lying on the floor and moaning) “I thought I’d slip out for a few days for a, a bit of an adventure in the Himalaya, Margery.” (Sheepish smile)

Pallin: “Adventure? The ‘Imalaya? But, but isn’t, aren’t we… WILLIAM HENRY SMITH! PUT DOWN YOUR PET RAT AND TAKE YOUR SISTER OUTSIDE LIKE I TOLD YE TO! I hear the death cart (hack, hack) outside!”

No, I’m pretty sure ‘freedom of the hills’ was an idea that came into vogue well after and in places where the wild was relatively tamed, the rough roads made smooth, and people weren’t as occupied with mere survival. Sometime after freedom from the hills was a more likely goal.

It’s impossible to map, this penchant certain people like my cousin Sarah’s son Beau, have to draw, say, or others to spend all their free time taking photographs. Why one of your children can’t help but pound on the piano keys or pluck at the guitar strings whenever they have the chance.

You can study creativity your whole life without getting any closer to conquering this mystery. It’s enshrouded like the summit of an unconquerable peak.

Some can give a convincing case for the origin of the impulse but I think that creativity, like love, like the highest Himalayan heights for most of us, will always be veiled behind a curtain of enigmatic sublimity. It’s a holy enigma.

It seems everything of real value has been hidden thusly, like diamonds deep underground.

Why did Mallory, Irvine, and their companions, and why have many others down through history looked with yearning to the hills? Why do some choose to seek out adventure, as difficult and perilous as we know it may be?

For much the same reasons some chisel stone, strum a chord, fold paper, pirouette, apply paint, arrange rocks, grind metal, paradiddle, plane wood, focus a lens, lay fingers on the keyboard, and, lest I forget, have children. I could keep going.

But, in that department anyway, I’m finished.

Not so regarding the oftentimes risky pursuit of creativity.

For me, a reconnection with beauty is central to why I climb. The same can be said for why I create.
Beauty.
It’s a human need and a human right, as I’ve heard my friend Anna Keating say. And although beauty or at least predilection is in the eye of the beholder to a degree, it’s possible for humanity to create, across all spheres of activity, excellence that rises to the level of artistry – artistry that itself apprehends beauty – the corporeal to help apprehend the spiritual.

It’s perhaps fitting that we don’t know whether Mallory and Irvine reached the summit of Everest, just as his profound three word reply leaves us nowhere closer to the mysterious reason why some can’t help but push against the confines of extant culture with what they, and they alone, have been gifted to create.
Yesterday, in part one of this epic subject, I said that for some, creating art isn’t far removed from the inclination to climb mountains or, more generally, the desire to live a life of epic proportions, however one defines epic. It’s inscrutable. After all, a large percentage of people who would call themselves creatives, or makers, or artists, aren’t in it, primarily, for the money. As is true of most climbers, few artists are able to live on their art, having to rely on alternate sources of income, like my wife’s and my occasional robbing of a bank, to pursue their often recondite calling.
Ok, so if not for the money, why create, then?

Turns out, understanding the impulse to create is every bit as insurmountable as Mallory’s three word reply:

“Because,” says Mallory, and in my mind’s eye, he says it with the faintest of wry, impish smiles, “it’s there.”

Listen to another Brit as he explains, as only John Cleese of Monty Python can, that though creativity, like my daughter and her husband’s eagerness to don heavy packs and hike the 75 mile long Alta Via in the Dolomites, is ultimately inscrutable, at least to my wife,

the optimal conditions to create creativity can be understood. His excellent lecture is linked here.

It’s a bit difficult for me to understand, let alone explain, my on again, off again tendency to wake in the wee hours, and instead of slipping on climbing boots and strapping on a headlamp, slipping downstairs to the dining table, open the laptop, sip my Breville-made “starter fluid”, and stare yet again at a white screen – the blank page of our digital age. It’s just a bit daunting, a bit like a Sherpa who’s climbed Everest multiple times, about to head toward the Khumbu Icefall yet again.

I think a large part of it has to do with you. With the connection I feel with my readers, those of you who’re still with me. And, I think it “connects” with my similarly puzzling penchant for sculpting the human hand.

Creativity, for me, is all about connection. And about reconnection, at times. 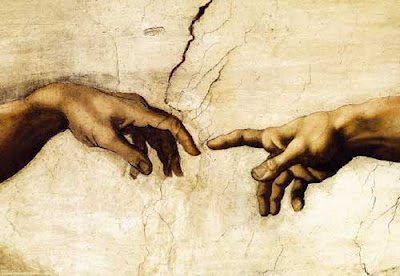 So, it turns out, are hands. 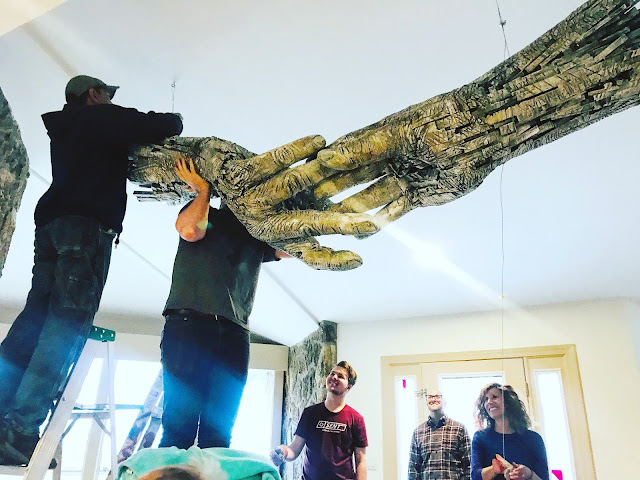