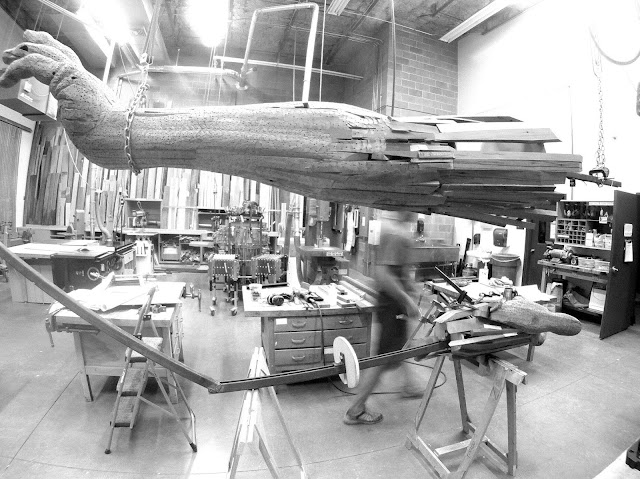 About nine hours from now (It’s 2:48 am), Joe Soulka and his framing crew will begin setting my new studio’s trusses in place.

Before I get into the meat of what I want to talk about today, I thought I’d mention the website Upwork, where, if you’re a designer, graphic artist, web developer, writer, engineer, architect, etc., or need the services of someone who is, the site serves as a great connector. I found Upwork a few months ago and used it to find and hire someone to assist me with designing my current public art project, including 3D renderings and a fly through, which I used in my proposal, and, I’m sure, contributed mightily to its success.

Collaboration is a key factor for successful outcomes in much of what I do, artistically. Especially in the design phase, I rely heavily on the expertise of others. For my studio build, I let John Hockman take the lead with the design, and, to this day, continue to refine the space as much as practicable in order to customize it for the work I do, and hope to do.

Around a year ago, after I played with the studio’s rough dimensions on Sketchup, visualizing its interior space, I realized that rather than subdividing the app. 20′ x 50′ space into thirds, with a storage loft over two of the thirds and 1/3 kept open for working on taller sculptures, as I had previously imagined, what I really needed was to keep the ceiling as high and open as possible throughout the entire space. I’ll explain why in a minute.

After giving John Hockman of Prospect Builders, the building’s designer and structural engineer, the new directive, and after a weeks-long “administrative relief” process where John argued (in writing) and successfully obtained permission for another 15% of additional headroom (as well as 15% more floor space), the interior peak of the studio’s vaulted ceiling will now be app. 20′, and its side walls 12′.

With the “max headroom” we were granted, the empty space overhead will be used as both 3D storage space, just like I did for the first few months I was making art again at the 3D Arts Shop at the Colorado College (see photo above), as well as have a gantry system, which would allow me to move the work around the space nearly effortlessly, as well as manipulate it in space, turning the work over, again, sans anywhere near the time or effort it typically takes me.

The type of truss we’ll be employing is called a parallel chord truss, which doesn’t require a bottom chord, allowing the interior space to be unobstructed. John Hockman engineered the trusses to withstand the region’s snow load as well as the weight of just about anything I might want to hang from it, and I’ll be employing an I-beam gantry system with two parallel beams running the length of the building and a third “bridge beam” running just below them, perpendicularly, at app. 14’6″ off the ground, from which a couple chain hoists will hang. From them, I’ll be able to pick up and place sculptures just about anywhere within the interior footprint of the building, and with a large garage door on the building’s west gable end, I should be able to back a flatbed truck into the space and simply set a piece down onto the bed, rather than grab anyone with a decent back off the street to assist me in lifting my at times back-breakingly heavy sculptures.

The photo below is what John sent me, around a year ago, to show me what parallel chord trusses look like. I’m hoping that before the end of the day today, my studio will be in a somewhat similar state. 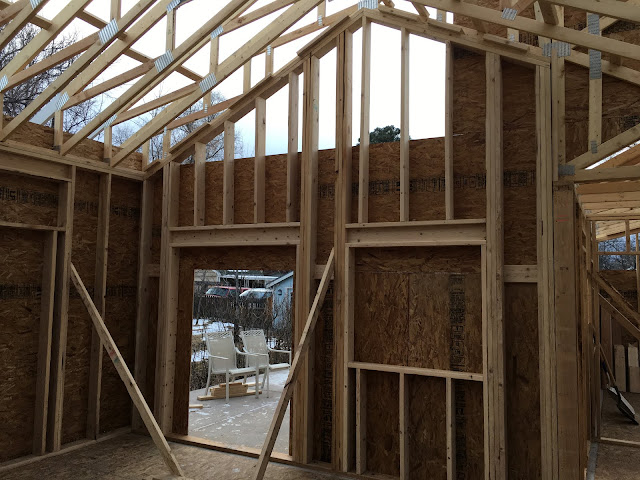 What follows are a bunch of screenshots of a portion of the text conversation between John and me late last year – my texts in blue. (By the way, where it says 4:40 am and such, that’s when I took the screenshots, not the time we were texting)
Sorry for the choppy nature of the conversation, joined in progress. B.t.w., this was originally posted on November 28, 2018, before I figured out how to copy and paste longer text conversations without “overlapping”. 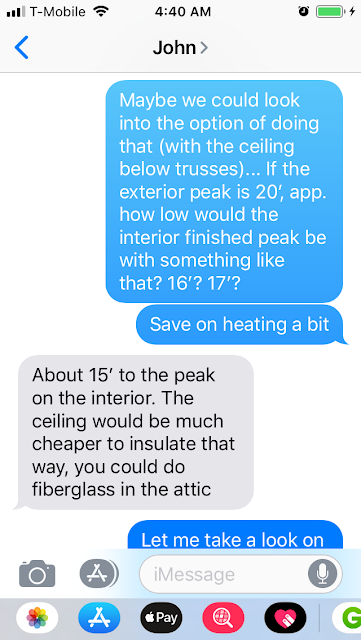 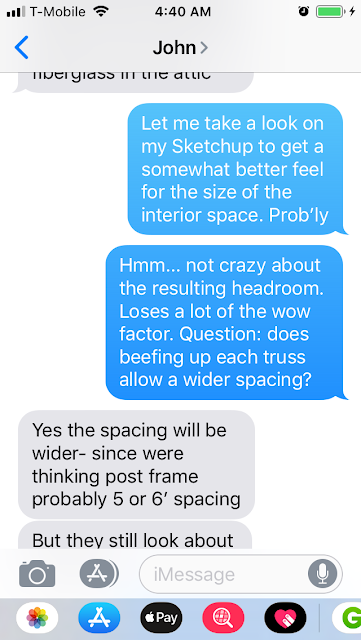 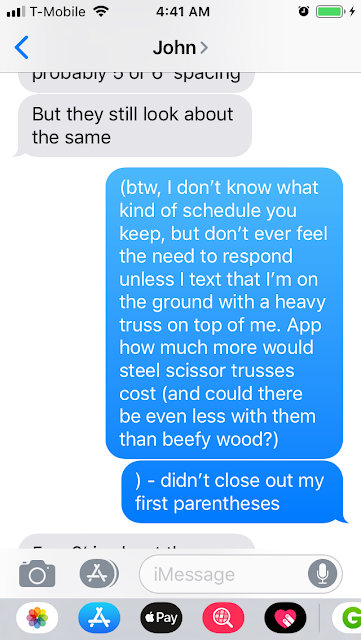 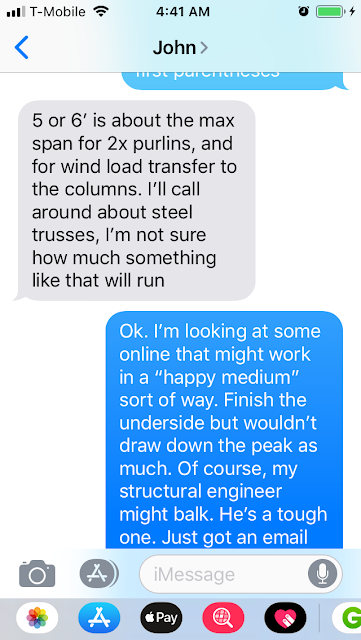 (John is the structural engineer) 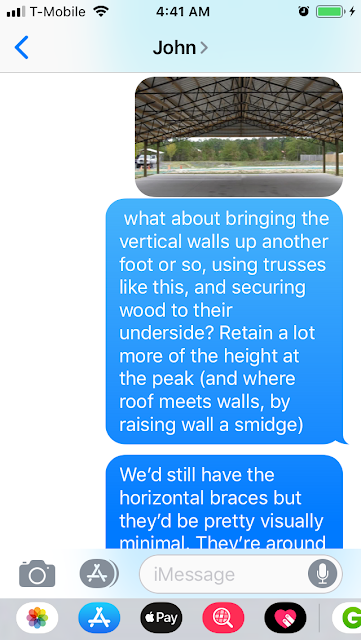 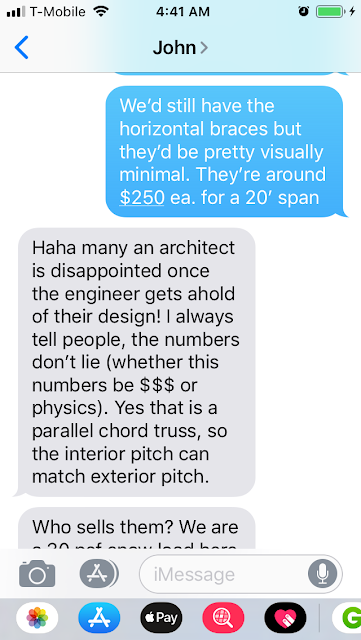 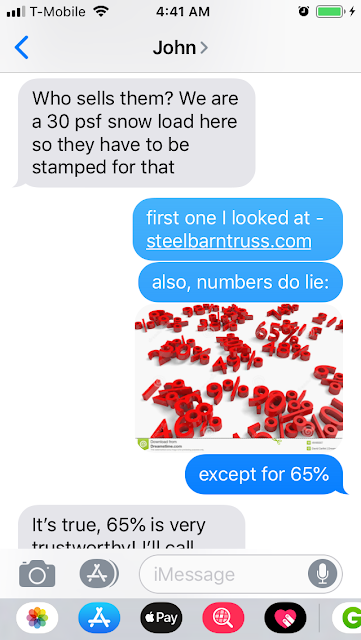 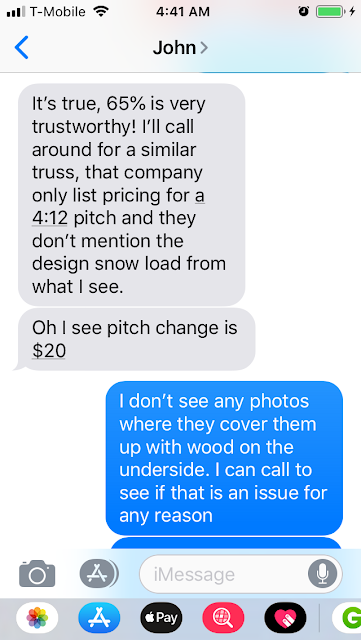 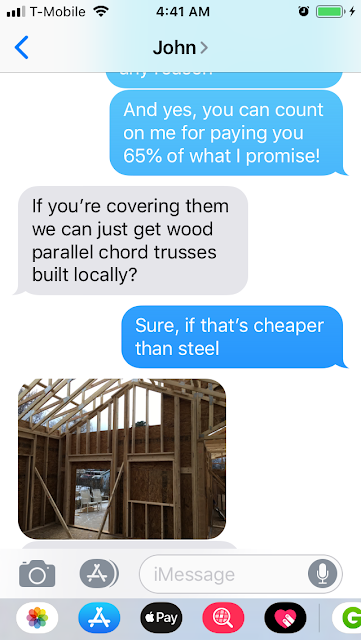 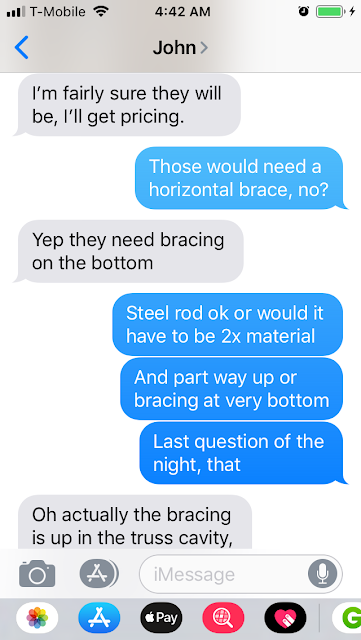 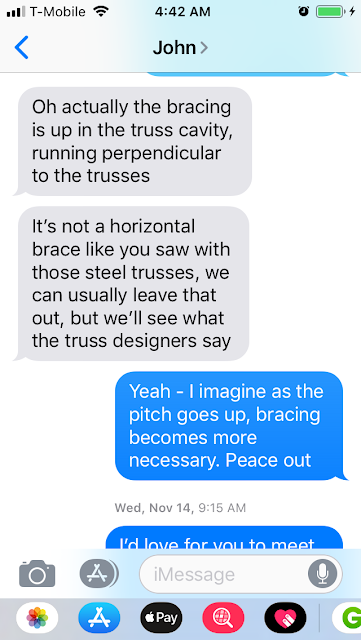 Thankfully, as already mentioned, we were indeed able to safely forego a bottom brace or chord.

Safety is what I desire for the construction crew, both this weekend and through the end of the project. 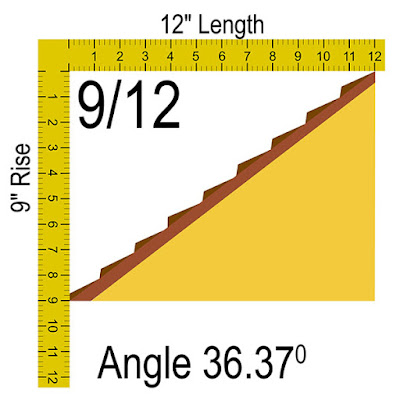 The roof pitch, at 9/12, is significantly steeper than the 6/12 pitch of our next door rental and my old studio, both of which I re-roofed nearly single-handedly many years ago, while Nan was on maternity leave following the birth of our son Will.

Glad Joe’s specialty is roofing, and that he has a veteran crew. Still, I know full well how a little inattention in such circumstances can have potentially devastating results, and in the next episode, I’ll look back at a “New York minute” from my past that could have been all she wrote.