Time To Just Lay Down And Die? 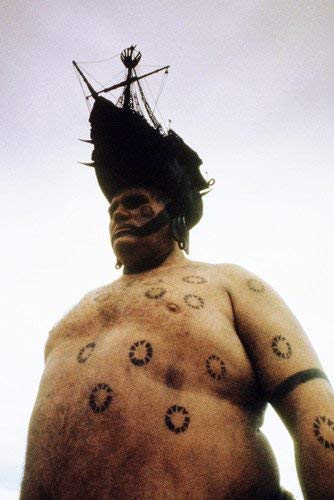 Yesterday’s post didn’t generate the results I was hoping for. Not yet, anyway. Patience, patience, I tell myself. Give it time.

I’ve been telling myself that a lot for the past couple of months, ever since I’ve been working out more regularly. I may not look as big as the giant in the photo above, but it feels that way, especially comparing my current body, in the privacy of my own bathroom mirror, with the photo of a younger, thinner me that Nan just found.

Since starting the concerted effort to drop some weight, I’ve gone jogging perhaps a dozen times, run/walked up and down the stadium stairs at the Colorado College, just blocks from my home, maybe four or five times, and used the school’s gym for upper body strengthening a few times as well. I’ve kayaked a few times, once for five hours, and gone biking with my wife twice.

And then there’s my “day job”, which is fairly physical in and of itself. Two days ago, I took a momentary break from shoveling dirt and raking rocks to talk with a friend on the phone who was at the same stage with a similar build a week ago. Though a furniture maker who often makes chairs, he, like me, rarely sits in one during a typical work day, and yet he said he was pretty well whipped by the end of a day and a half of backfilling and grading dirt in preparation for concrete flatwork.

At the time of the call, late afternoon, I wasn’t feeling tired at all, and had the thought: all my working out must finally be paying off. But just a few short hours later that night, alas, I sent him a gif of a guy flopping onto the floor, admitting: 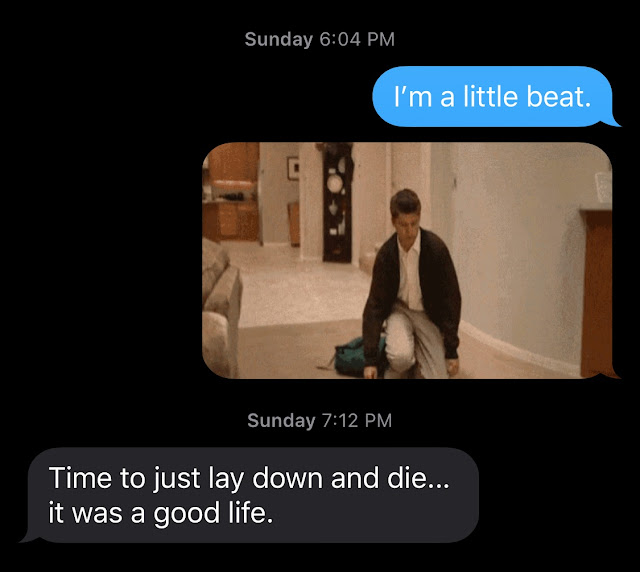 Yesterday morning, as I was jogging with Ruby, my faithful, furry companion (who at this moment, at 2:37 am, is lying just feet away in the kitchen, making light smacking noises with her mouth while fast asleep – probably dreaming, as I would be, were I sleeping at the moment, about the jalepeño Cheetos Nan wouldn’t let me run down to 7-11 and buy last night), I thought about the overlay between exercising one’s body and exercising one’s creativity. To wit: for me, anyway, both require an inordinate amount of patience before seeing any real progress.
For me, regress, in the case of working out, is progress. I’m trying to literally roll back that insidious weight gain which, despite my typically physically active life, has been slowly creeping up over time.
As I knew would be the case before I began my coordinated, multi pronged attack on my excess poundage, there’s a period of time you have to slog through where despite seeing some small positive changes, the big one you’re after – concrete evidence on the scale that you’re beginning to lose weight – stubbornly refuses to occur. In fact, often, you gain weight initially, as the muscles you’re strengthening weigh more than the fat that’s hopefully being consumed.
So while I’m not nearly as concerned with the potential of coughing and having my shorts’ button shooting across the room and putting someone’s eye out, what I’m really desiring still, alas, eludes me: Weight loss.
I know that with every ten pounds of weight I lose, my jogging times will significantly decrease as well, yet another goal. I know the amount of time I can jog up and down the stadium stairs, before having to switch to alternating jogging with walking, will increase. (Flashback to around thirteen years ago when I could jog up and down the stadium stairs for an hour without resorting to walking once while wearing a Kelty child carrier pack containing Nate, our youngest. My, how it’s true – you don’t know what you have until it’s gone.)
That’s what I said to Nan, the other day, after she showed me the following photo of me with what I obviously must have thought at the time would never leave: washboard abs (hence, the lackadaisical consuming of mountains of ice cream on a nightly basis). Never mind the hair loss, for which, hey, what can you do; all my hopes for a full head of hair went down the drain years ago. Sigh. 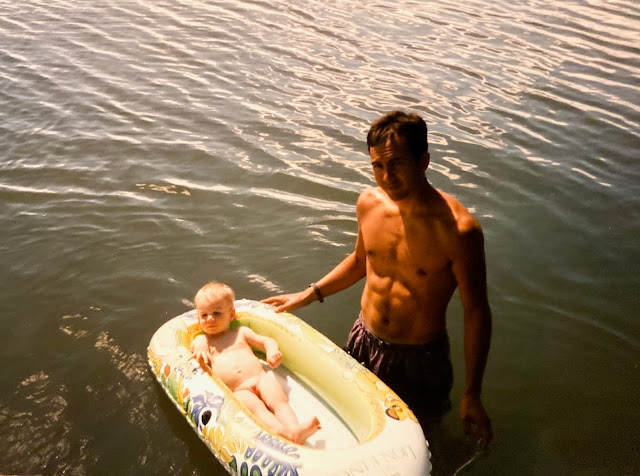