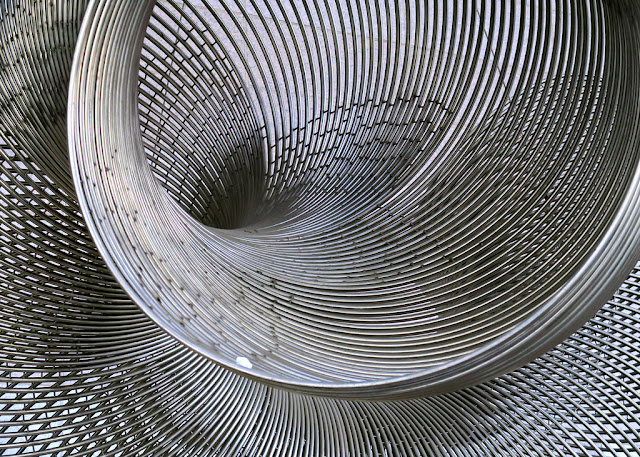 If I could trap time in a bottle… well, in the form of this post, I think I just might. 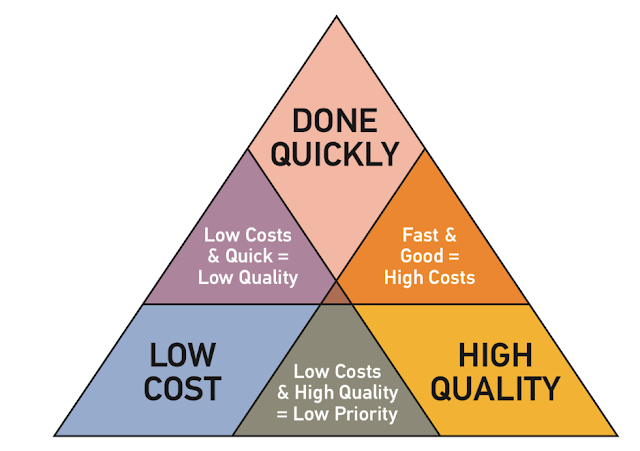 FOOL: “Ok, I understand. No problem. This all sounds great, Craig. Appreciate the call.”
DIRECTOR: “Sweet, dude! I knew I could count on you, man! See you tomorrow at 10:30 at the production office, then?”
FOOL: Craig, why not make it now? It may be late in the day but I, for one, won’t be sleeping tonight, so I might as well get a bit of a head start on the project. Goodbye Craig. Goodbye sleep. Goodbye weekend plans. Goodbye family. “Sure – see you then!”
DIRECTOR: “Oh, and Andy, I almost forgot to mention – will you be needing any money up front? Because if you do, I’ll have to rob Peter to pay Paul. I’m pretty sure I’ll be able to pay you in one lump sum within the month, though. You cool with that? Great! Catch you on the flip side…”
Time Compresses is the title I’ve given this post. It didn’t take too many projects like the fictitious one just described before I coined the adage time compresses when you’re in a creative project that speaks to the tendency for the time you think you have for a project, an installation, a deinstallation, or heck, any time you’re really in the zone creatively, to shrink, and shrink markedly. To wit, in my zeal to recreate the conversation above, time’s gotten away from me and I haven’t even begun to unpack anything I’ve learned about the slippery nature of time. Make that the Slinky-ness of time. As in,
Time’s like a Slinky you’ve stretched out wide. Let go of it with one hand to sign that project’s contract and watch it suddenly, and powerfully, do the same – contract.
________________ 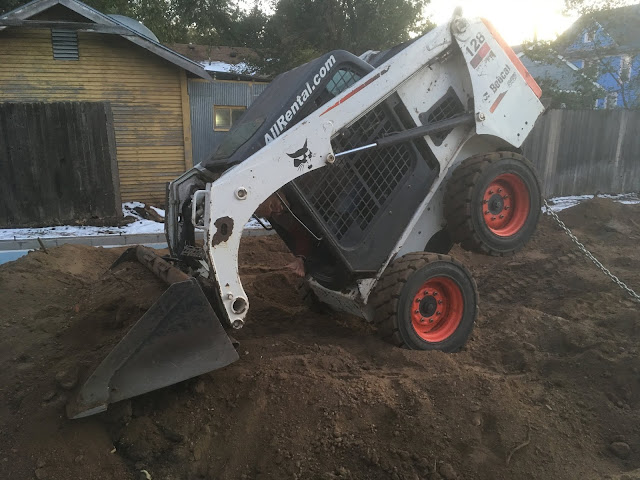 It’s 1:55 am. Yesterday, October 12, 2019, while I was volunteering my time, operating a skid steer to assist the masons I’ve hired to build my new art studio’s stem wall as well as to backfill and grade the dirt prior to pouring the studio’s floor, my adage, time compresses… was top of mind. My mind, anyhow.
I’ve a tight schedule to keep on the studio build. I’d made the concrete company aware of it, and asked them to give me a realistic timeline for their portion of the project. It conformed, just barely.
Just as importantly as the schedule is the budget. I didn’t want to pay for another day of renting the machine, as well as two tampers, to the tune of nearly $500 per day, if I didn’t need to.
But there they were – two rented tampers, sitting unused for hours, which should have been compressing soil all morning in preparation for the flatwork. Twice via text, and once in person, I’d gotten the assurance – don’t worry, we’ll be finished with the backfilling and grading by 4 pm, the end of the 24 hour rental period. Note the text times below: 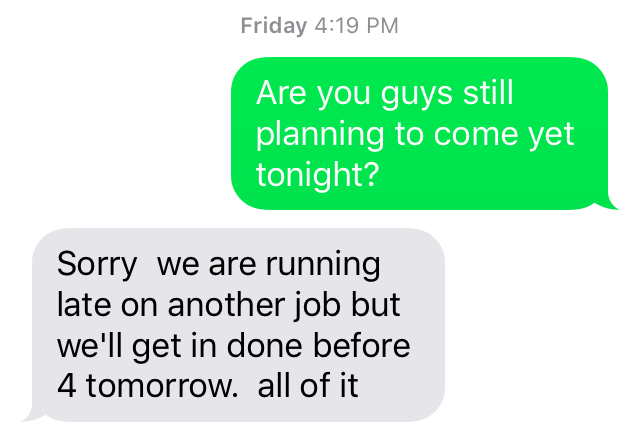 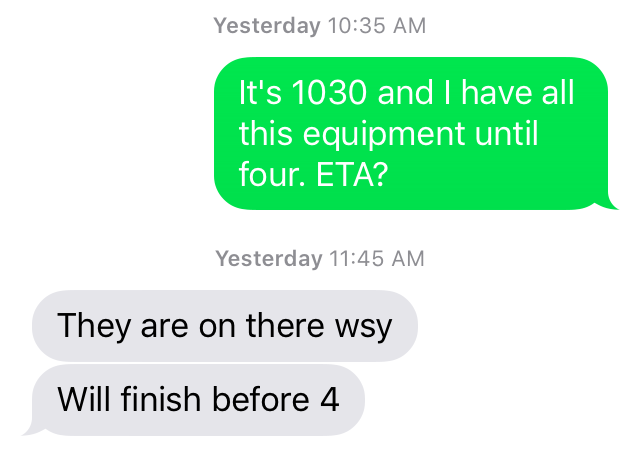 They’d shown up for a few hours on Friday afternoon, however, much of that time was spent trying to safely extract the skid steer from its precariously tilted position, inches from falling into the trench and damaging the stem wall, not to mention possibly causing operator injury. (From then on, I did most of the skid steer operating).
It wasn’t until after noon yesterday that they rolled in to assist me. I don’t want to steer you wrong; masons work hard, and I’ve no doubt that they play hard – it looked like they’d had a hard day’s night, anyway.
Even with a lot of assistance from yours truly, the deadline came and went, as did, shortly afterward, my half-day’s worth of help. I continued to operate the skid steer until the moon was just beginning to peek over the trees. 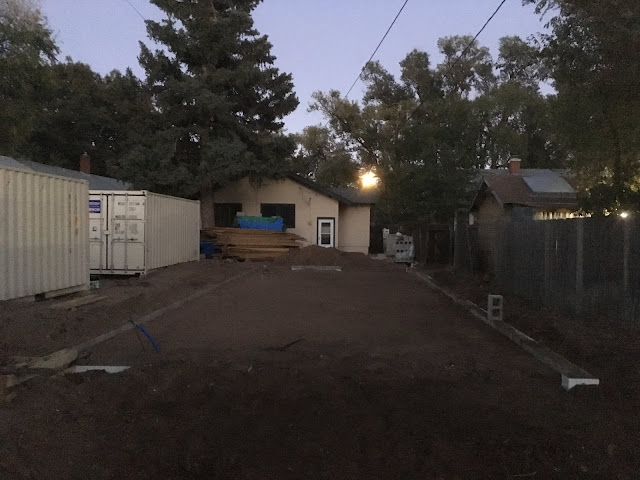 And the point is, I knew it all along. Despite the fact that concrete construction isn’t my bailiwick, it was quite obvious to me that there was no way the guys were going to be able to backfill and grade in time on their own. That’s why I was out there, literally pitching in.
How can it be, I kept wondering, that they couldn’t see things as clearly as I could? At least, momentarily, each time I’d stop to wipe the dust and sweat from my sunglasses.
I’ll be back at it today, and I’d better be joined much earlier than I was yesterday. The extra day’s equipment rental charge? That’ll be on the concrete company.

Despite my frustration at the lack of diligence, I must admit I like these guys. They’re interesting character studies. Well into their retirement years, they’re still hefting concrete blocks, chiseling cultured stone, and screeding flatwork, one, with a cigarette dangling from his lower lip, the other, with long, flowing, white hair and not a few missing teeth. I don’t think they’d mind me saying it; they’re a bit rough around the edges, a bit uncouth, a bit grumpy at times, and I’m sure they’re toning it down for the customer. But I like them, and anyway, I don’t think they’ll be reading this post.

I imagine they’ll probably be leaving the bar where they’d been sharing old war stories right about now.