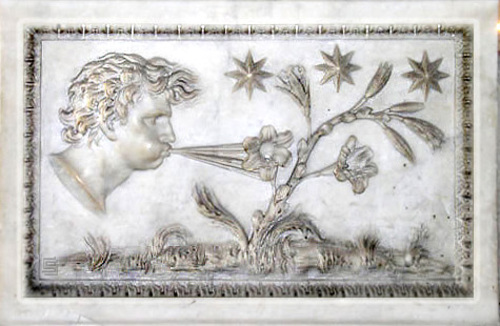 Winds of change, I often ask myself on such days?

Internally, personally, there’s also a motivational flow such as I’ve found typically attends periods of heightened creativity. It’s wonderful to experience, and sometimes, hard to let go of, times your sails hang limp. All too often I’ve been there, not done that.

Creative projects vary widely in terms of the length of time from conception/inception to delivery, and if it sounds like I’m borrowing terms from childbirth, you’re right. With five kids, my wife, Nan, and I know a thing or two about the process, and for me, it overlays the creative process beautifully.

Not so beautiful or enjoyable, however, is a woman’s experience after having delivered a baby, at least internally. Her body, which has, for nine months, been wonderfully transformed to nurture another life within, now has to begin to revert back to its former shape. The process takes weeks, if not months, and can be attended by further issues, like postpartum depression to one degree or another. No fun indeed.

Thankfully, my wife never experienced postpartum depression after the birth of any of our kids, but approximately one in two women experience some form of the ‘baby blues’, and a full-fledged depression, it is estimated, hits nearly one in five.
The same sort of thing can occur after the end of any artistically creative period.

During the project, you’re “in the flow”. Dopamine-bolstered, you have no problem cranking out 15-hour workdays for weeks on end. 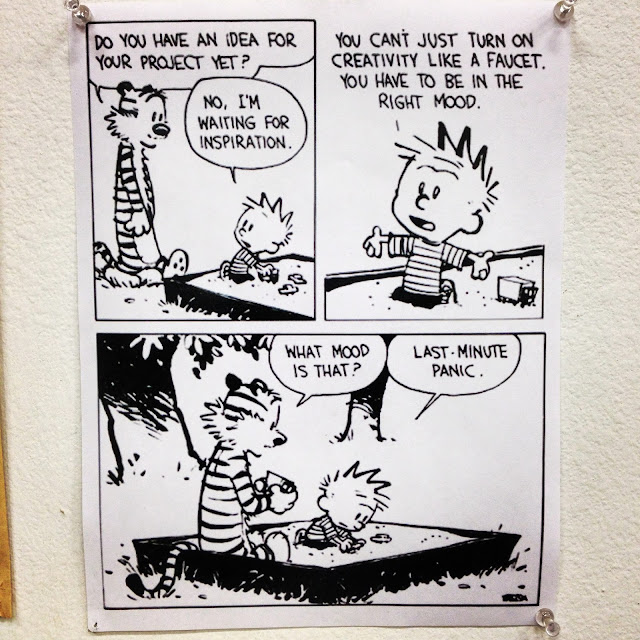 But what happens when your creative work concludes, and the scale of emotion tips in the other direction?

What then?
Chuck Close’s famous prescription for anyone waiting for the winds of motivation to begin blowing again runs counter to Calvin’s, above. If I heard Chuck say it once, I heard it a thousand times:

“The advice I like to give young artists, or really anybody who’ll listen to me, is not to wait around for inspiration.

Inspiration is for amateurs;

the rest of us just show up and get to work.

If you wait around for the clouds to part and a bolt of lightning to strike you in the brain, you are not going to make an awful lot of work.

All the best ideas come out of the process;

they come out of the work itself.

Things occur to you.

Inspiration is absolutely unnecessary and somehow deceptive. You feel like you need this great idea before you can get down to work,

and I find that’s almost never the case.”

Sometimes you just have to get out the oars and row. 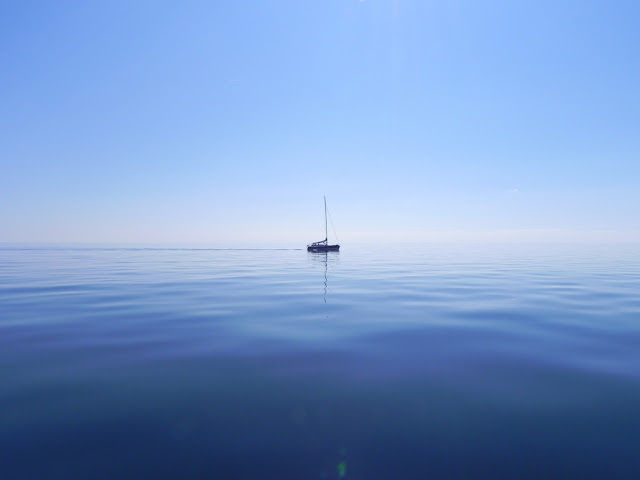 One might counter, “Easy for him to say – he’s always working toward an exhibition. He no doubt has a long list of collectors, even museums, waiting their turn to purchase a piece. What about me, making work day after day, week after week, with no guaranteed prospect of ever seeing my work in a gallery or a museum or on a collector’s wall?”
Also true. I’ve found that it’s easier to get down to business when I know there’s an audience for the work. A market.
But Close knows of what he speaks. Back when I worked for him, I also recall him saying that there was a period of time roughly from the late 1970’s until the mid 80’s when he’d look at the often silent phone, then look at Michael Volonakis, his long-time assistant, then back at the phone, and say, “It’s not ringing.” Yet, following his own advice, he continued to make tracks on the canvas, year after year, until, for whatever reason, the art fickle wind of the art world began to fill his sails again.

I spent some time with the artist James Surls a few years ago, visiting him where he and his wife, Charmaine Locke, live in the Missouri Heights above Carbondale, Colorado, on a stunningly beautiful summer Sunday morning.

We met in his cavernous studio and he graciously showed me where he and his assistant, Tai Pomera, make Surls’ sculpture and drawings, and then walked into the even larger rear room, surrounded by scores of his large scale wood and steel creations. Surls set up two folding chairs, bade me to sit, and asked me about my artistic journey to date.

After I told him about the moment, just months earlier, when I felt that a return to creating art (after a decades-long hiatus) was inevitable, James sagaciously replied,

In other words, as I took it, there are clues all around us that hold the key to the direction in which we should head that are often times obscured from our vision, especially when we’re inattentive. When we don’t take the time to stop and smell the roses. To set our smart phones down and listen to the much, much wiser, wild kingdom of nature, of flora and fauna, of the seasons, of the wind and the waves and, again, my take, overlaying a few of my current projects, the Designer, the General Contractor, if you will, behind it all.

So, which is it, I hear you ask – especially times you’re not feeling all that creative, or all that interested in connecting with others (which, for me, follows a similar curve on the graph),

should you wait until the wind fills your sails or get the oars out and row?

I’d say keep both ideas in mind. Wait until inspiration strikes and you may be waiting a long, long time. Like, forever long.

Yet if you doggedly grit your teeth, hold your breath, and close your eyes while seemingly rowing against the tide, you might totally miss the internal and external clues that perhaps you’re going the wrong way, leaving you frustrated, lost, confused, angry, etc.

Like the young man whose car – whose life – needed a jump start the other day.

I was sitting in my pickup in the parking lot of Monica’s Taco Shop, waiting to go into the restaurant until I had finished talking on the phone with a structural engineer in Tulsa, Oklahoma, about the public art project that I’d begun preliminary preparations for. Next to me, a heavily tattooed Millennial exited his car and tried to get my attention. I looked at him, lifted a finger, and pointed to the phone in my other hand. He seemed frustrated at my lack of immediate response, but whatever he needed, it didn’t seem like an emergency. I wasn’t, as he seemed to assume, brushing him off, and, after I had concluded the conversation, I opened my door and walked up to the young man, perhaps in his mid-twenties.

Now, I won’t give you a fuller picture of his attire and grooming but to me, if you’re thinking about tattooing your face (excluding tattoos that, say, tastefully recreate eyebrows and the like), you might want to count the cost first, and I’m not just talking about the money you’ll shell out for the design. I’m talking about what your culture at large will think about your decision. And, like it or not, most cultures around the world yet frown on the practice, especially if the words you’ve chosen to have scrawled on your forehead aren’t, shall we say, all sweetness and light. Heck, you know this – that’s probably why you’re thinking of doing it – to fight against a seemingly arbitrary and unfair social norm, like, oh, say, bathing.

Hey, as we’re fond of saying in the US, it’s a free country. But, as I’ve often told my kids, regarding just about everything in life, you’ll either pay now or pay later.

I won’t recount his tale of misery and woe. Only to say that it was myopically focused on the latest few indications of what he said were a long list of items in the “bad luck” column. In fact, I’m pretty sure he lived out of his car, which was, again, refusing to start. Having no job, no other source of income, and no willing family or (reliable) friends to assist him, however, what would be a small road bump for most people had dominated his life for many hours. I’m certain no one had dared to stop and help him, both from his vibe and appearance.

Within a few minutes, we were able to jump start his car, and he was appropriately gracious in response, giving me some hope for him yet, but how I longed to have some way of imparting just a bit of what I’ve said in today’s post to him. Yet I sensed he wasn’t ready to hear it. Any such words of wisdom would sound Greek to him, if he could hear them at all.

As I drove away, with sausage burrito and salsa verde riding shotgun, I wondered, and yet wonder how similarly clueless I am to wisdom that’s similarly calling out to me,

calling me into life more abundant?

Either way, wind at your back or no, what’s required of you and me today, if we intend to be more successful in our creative journey, is to resist ennui, perhaps adjust your focus, including the amount of time dedicated to all things internet (cough), and, perhaps, ask for wisdom – wisdom to better comprehend the corresponding wisdom riding the wind.