The Technological Miracle At Your Fingertips 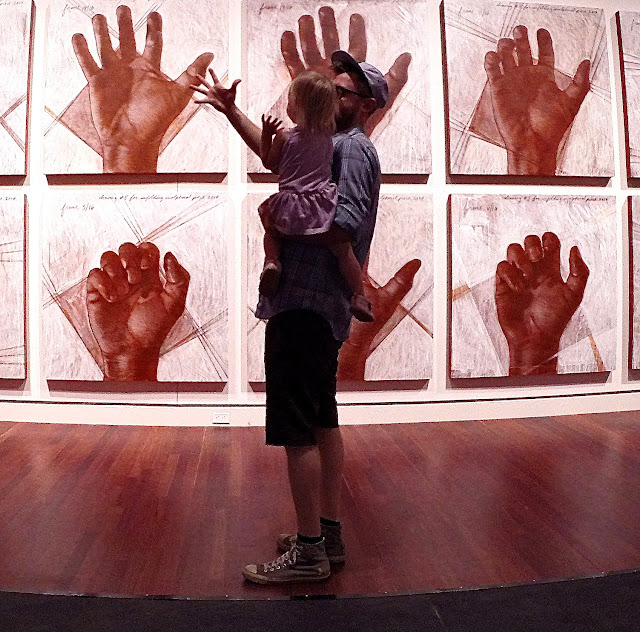 Technology is a word encompassing much more than the latest electronics and computerization. Were I to be writing right now with a #2 pencil, instead of the MacBook Pro that the Colorado College Art Department gave me when I resigned in 2016,
I’d be using technology.
Heck, if I used my finger to write it in the sand, I contend I’d still be using technology.
A few years ago, just months into narrowing the focus of my art to the human hand, I happened to be in New York when the exhibit Out of Hand: Materializing the Postdigital was on view at the Museum of Arts and Design.

Sigh. It seems I’m behind the times. Going in the opposite direction, in fact.

The show focused on work being created using a variety of computer-assisted digital fabrication technologies – technologies, ironically, which couldn’t have been created without the use of the most amazing tool each of us carry around with us wherever we go, and I’m not talking about your smart phone.
The human hand.
It’s interesting to me on a number of levels, and for a variety of reasons.
One of them regards the hand as technology by design.
I’m no Buckminister Fuller, but that doesn’t prevent me from enjoying a good design challenge. I was in Italy a few years ago, assisting with an architectural exhibit for the Venice Biennale of Architecture. One day, as I was working on some parts for a scale model, I had a couple problems to solve. There were a number of thin metal wires that needed to slip into 1/8″ dia. metal tubes (representing the hold down ropes and stakes that would surround the tall bamboo and fabric towers our small team was building), and I needed to find a way to kill two birds with one stone; to make the parts detach for space consolidation when shipping the model, as well as to keep the wires from slipping up and out of the tubes when the model was in use.
I quickly conceived of a solution where, when the pieces needed to be connected, the wires would slide into the tubes and lock together with a barely audible, yet satisfyingly positive “click”, which could easily be unlocked and detached for shipping.
When I showed the solution to the Italian architect/designer heading up the project, he remarked, “Swiss precision.”
With a nod to the Bailey Bridge scene in A Bridge Too Far, I shook my head, tapped my temple, and countered,
“American ingenuity.”
But the human hand is “open source” technology that puts even Swiss craftsmanship (and American ingenuity) to shame.
I recall the effort it took for two assistants and I to create a kinetic sculpture of a hand for, during, and within a museum show at the Colorado Springs Fine Arts Center, back in 2014. It simply needed to open and close, aided by a motor, a linear actuator, a wifi connection, a maze of aircraft cables, a lot of welded steel parts, gravity, and, not counting the museum exhibit’s curator’s, three sets of crossed fingers.
Here are some photos of the process: 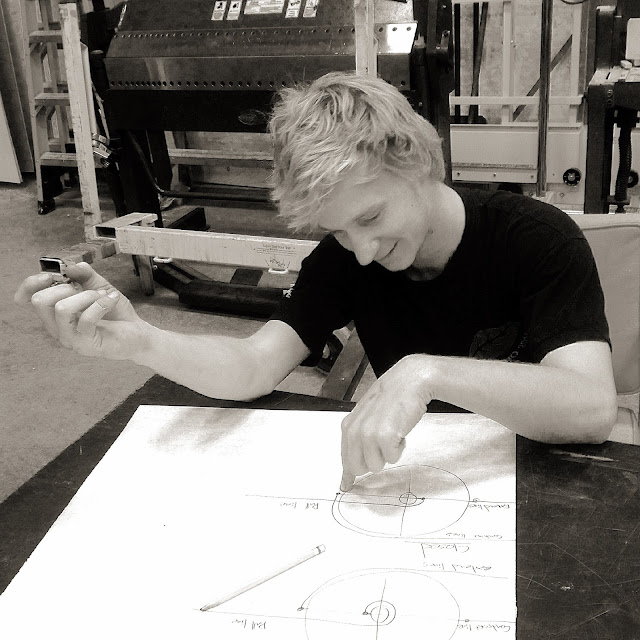 Above, Colorado College studio art major and assistant Hank Weaver designs the fingers’ cabling via drawing, math, and an examination of his own hand 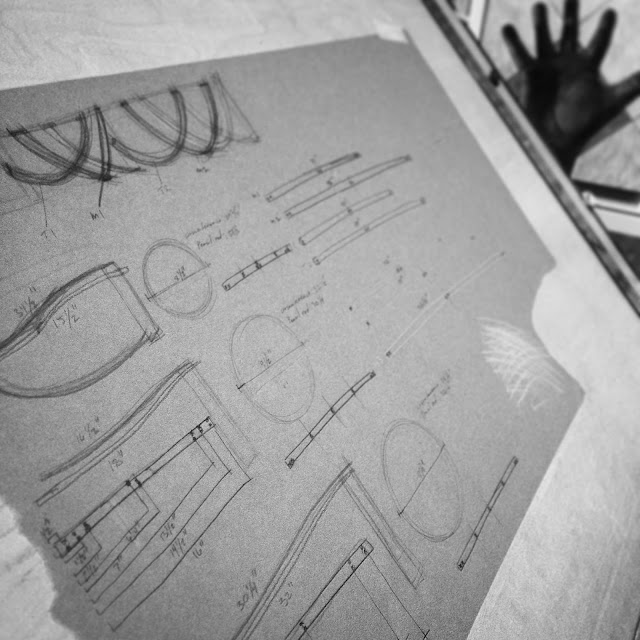 Colorado College studio art major and assistant Niels Davis sketched out lengths needed for the steel fingers (above) and, below, works on an early finger prototype within the museum (with some of my preparatory drawings on the wall behind him). 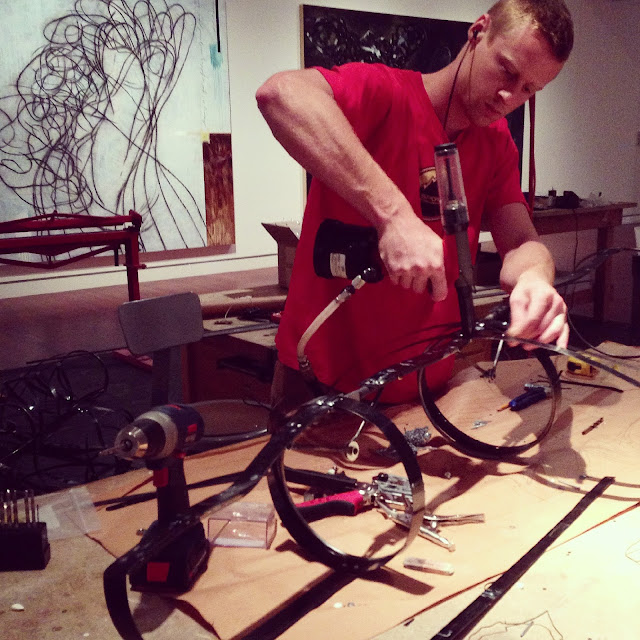 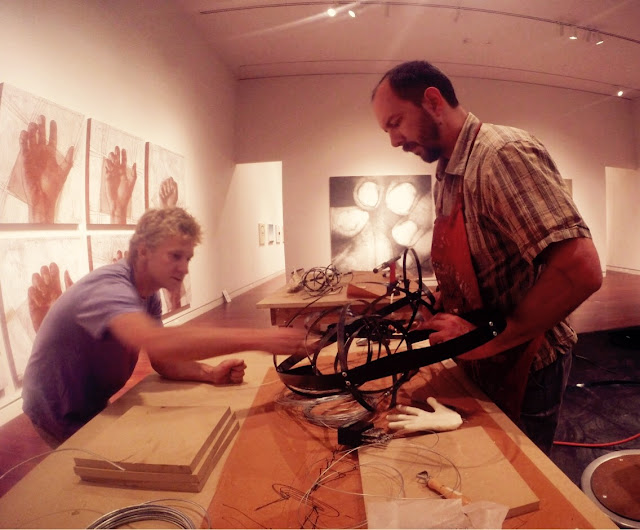 Above, Hank and I, working in the museum, work on one of seven eventual prototypes of a foldable finger. Below, the hand, which would eventually consist of a “skin” of steel banding, needed a more rigid yet foldable “skeleton”, which would consist of many small parts, many of which needing to be heated, hammered, drilled, welded, etc. in the studio. 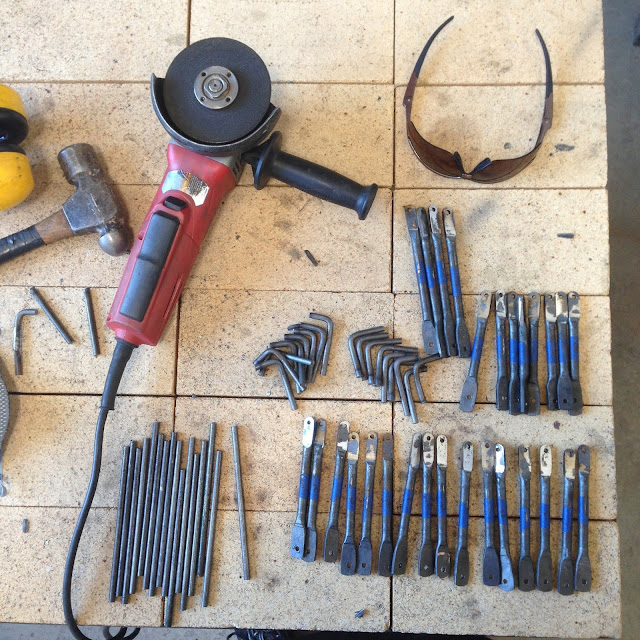 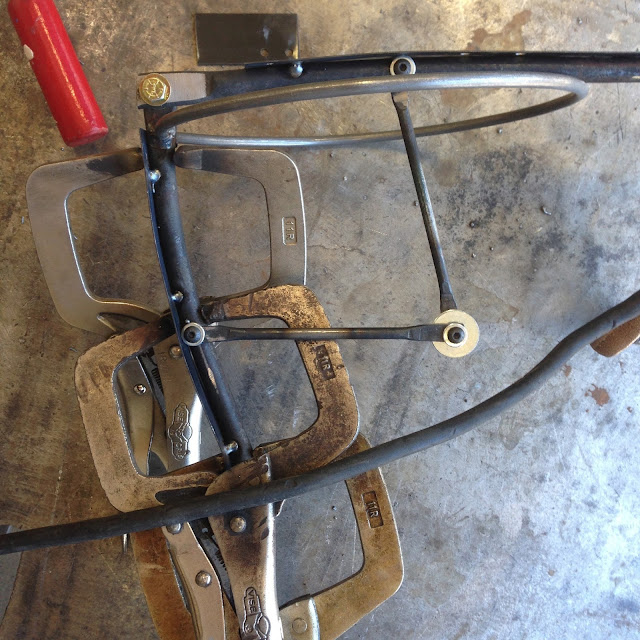 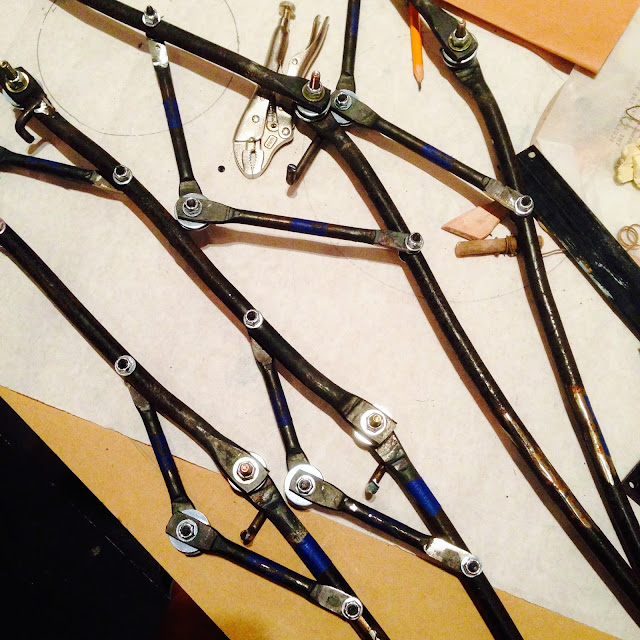 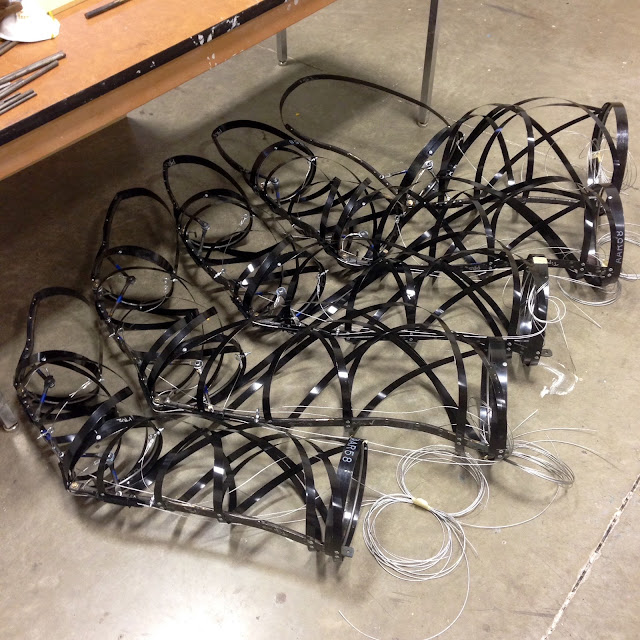 Above, four fingers and a thumb nearly ready to attach to the rest of the hand (which Hank is doing below) and, later, the arm of the piece. 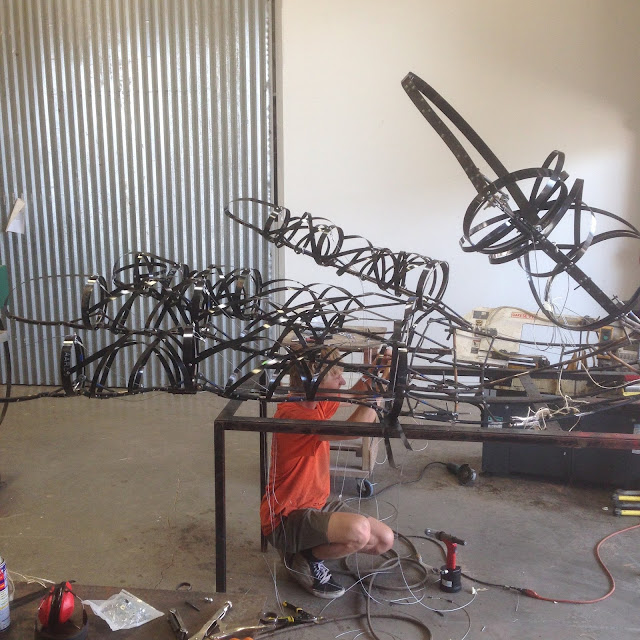 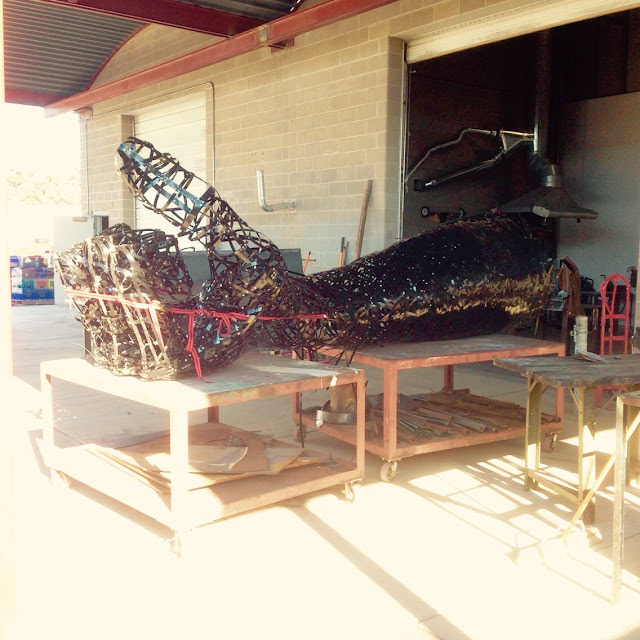 Above, Niels looks on and Hank bows before AG Werschky’s motorization and coding skills. Without AG’s generous 11th hour assistance, the piece would never have been kinetic. 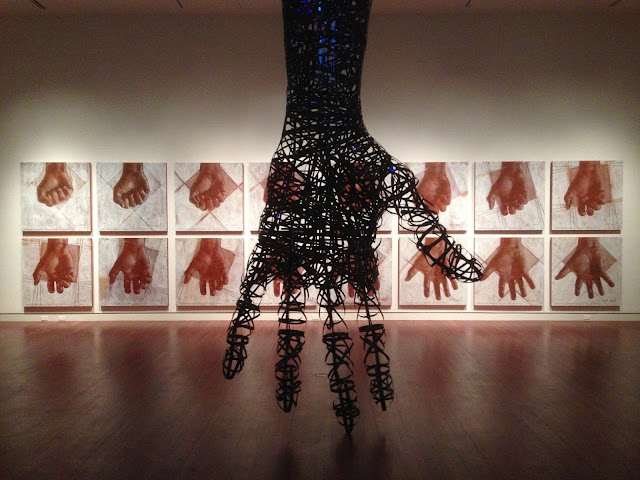 Above, the piece, extended, in its first iteration. For the final two weeks of the exhibit, we were able to clear our temporary workspace out of the museum and slow the piece down so that it would go from a closed fist at the start of each day to an open hand at the close. The change took such a long time, most people didn’t realize the piece was kinetic.
Finally, the second and final iteration of piece as it looks today: 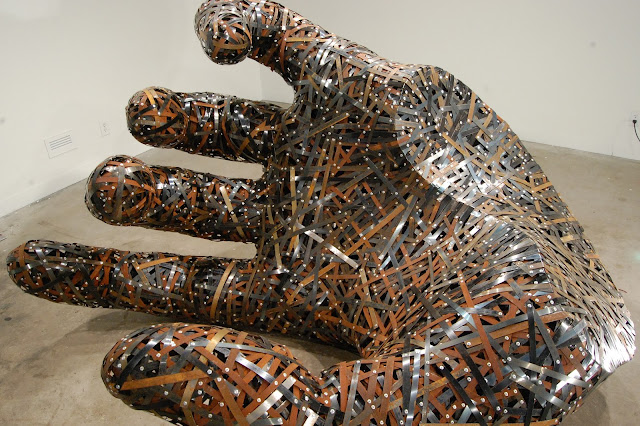 During the months-long effort that summer, I’d occasionally stop, take off a welding glove, and look at my own hand with renewed interest and amazement, opening and closing it, wondering at the hand’s unbelievable yet commonplace dexterity, amazed by these tools I carry with me each day. How disproportionate all this time and attention we were giving to our cumbersome, maladroit brainchild!
Familiarity breeds contempt. Perhaps it’s because our hands are a part of us and nearly always in our field of vision that we aren’t amazed by these wonderfully complex tools which are still capable of doing things no machine can compete with – not even SawStop’s fantastic, hand-saving table saws.
It’s as if we’re blind.
Listen to the following account in Anne Dillard’s wonderful book Pilgrim at Tinker Creek. Dillard recounts reading a book by Marius von Senden called Space and Sight, in which Senden compiles fascinating accounts of Western surgeons who, once they were able to perform safe cataract operations, ranged across Europe and the US to operate on people blinded by cataracts from birth. Dillard’s book includes the following passage:
“On the other hand, many newly sighted people speak well of the world, and teach us how dull is our own vision. To one patient, a human hand, unrecognized, is “something bright and then holes.” Shown a bunch of grapes, a boy calls out, “It is dark, blue, and shiny… It isn’t smooth, it has bumps and hollows.” A little girl visits a garden. “She is greatly astonished, and can scarcely be persuaded to answer, stands speechless in front of the tree, which she only names on taking hold of it, and then as ‘the tree with the lights in it.’ ” Some delight in their sight and give themselves over to the visual world. Of a patient just after her bandages were removed, her doctor writes, “The first things to attract her attention were her own hands; she looked at them very closely, moved them repeatedly to and fro, bent and stretched the fingers, and seemed greatly astonished at the sight… Finally, a twenty-two-old girl was dazzled by the world’s brightness and kept her eyes shut for two weeks. When at the end of that time she opened her eyes again, she did not recognize any objects, but, “the more she now directed her gaze upon everything around her, the more it could be seen how an expression of gratification and astonishment overspread her features; she repeatedly exclaimed: ‘Oh God! How beautiful!’ “
I’ll begin to wind things down with a blurb I recently wrote for the website of a downtown Denver city block renovated in 2017, which includes an indie hotel called The Maven.
Commissioned through NINE dot ARTS, I created a large-scale, suspended sculpture of the human hand for the lobby’s entry. 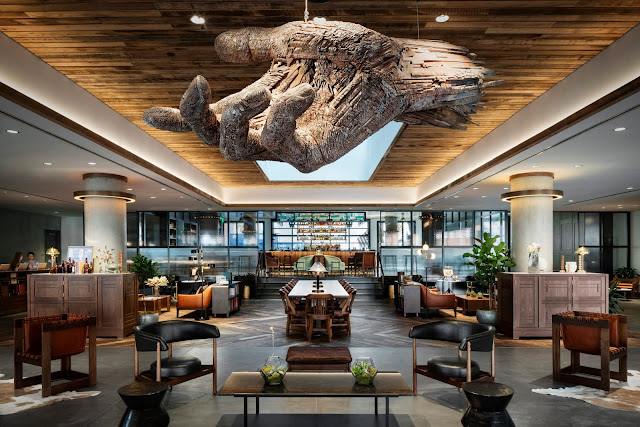 Here’s what I wrote:
“Quality. Craftsmanship. Opportunities to find the unexpected. The Dairy Block is all about a celebration of “the maker”. Thus, in creating a sculpture for the Dairy Block, this maker felt it worthwhile to hearken back in spirit to one of the fathers of the American craft movement, the woodworker, architect, and furnituremaker George Nakashima, whose work was once described as “quantifiable yet ineffable”.
Anyone who’s ever beheld or touched Nakashima’s work or read The Soul of a Tree will attest that the master woodworker/philosopher’s reverence for the handcrafted was only surpassed by a more intimate connection with the wood itself – not just for the material, solid and beautiful, but for the life within.
My suspended piece in the lobby of The Maven Hotel, titled “The Quantifiable and the Ineffable,” similarly upholds a regard for the craft and artistry of the past; the connection, via head, heart, and hand, that can only occur when one is intently present in the present; yet while reaching, both without and within, for the possibility, the opportunity to find… the unexpected.”
Oh, how blind I can be to the most amazing, even unexpected things that stare me in the face on a daily basis.
Not just my own hands, or the technology that hands have helped to create that allow me to publish this post worldwide with the touch of one finger. I’m also talking about the people I rub shoulders with, and the opportunities that lay before me, the trees outside my door.
Common miracles rendered invisible by their familiarity.
But I’m also talking about weaving traditional, handcrafted skills with modern technologies. I’m talking about having the vision to see that so much more is possible when we abandon neither the traditional technologies of the past nor those of today. Because despite my current artistic emphasis, which involves creating the work by hand, I’m not opposed to implementing machinery or digital technologies when applicable; I’m no Luddite.
In fact, I’m embarking on a public art project that does just that – employs the combined necessity for plasma cutting CNC technology – just set it up and let it go – along with painstakingly welding (and grinding, sanding, etc.) by hand.
Earlier I made the statement that there are still some things hands can do that modern technology can’t. Find that hard to believe? Then believe Bolivian physician Dr. Franz Freudenthal, who says what he finds the human hand capable of isn’t merely beyond what any extant machine can do, but miraculous – life-savingly so.

Before I click “Publish”, I’ll end with a link to a Great Big Story video regarding the lifesaving work that Freudenthal and a group of unbelievably talented indigenous Bolivian women with “weaving in their blood” are doing by inserting their intricate weavings into, and repairing, blood vessels.
See if what their hands can do also amazes and uplifts you, perhaps leaving you believing in miracles as well.
Life-Saving Weaving