Beneath today’s unrestrained humor lies a dose of valuable information about the term “knolling”. That Spell Check wants to turn knolling into knelling tells me the word hasn’t quite made it into common parlance, but I’m doing my levelheaded part to change that. Never mind the self-titled, esoteric, and awkward aphorism I’ll try to unpack: density doesn’t necessarily equate a Baconic propensity. Or, one that occurs to me this morning: Judliness is next to Godliness.

When I supervised a shop at the Colorado College, I found the knolling concept, explained below, one of the most effective ways to get my evening student shop monitors to grasp the way I wanted to find the space upon flicking on the lights each morning. A place for everything, and everything replaced. Oh, perhaps the time one of them lined up all the accumulated detritus, including three spent sunflower seed shells he’d found among my perpetual shipwreck of a workbench – do as I say, not as I do – was going a bit overboard, but if I had to choose one extreme on the Judd/Bacon scale to permanently occupy, it’d be Donald’s. Thanks, but no thanks, Francis. For the rest of you new to the concept, you’re welcome.

To knoll is to have a psycho-pathetic compunction to put everything not in use away, where it belongs, and with what remains, to group all ‘like’ objects and align or square them to either the surface they are on or to the studio/workshop/office walls. For example, behold Donald Judd’s New York studio desk: 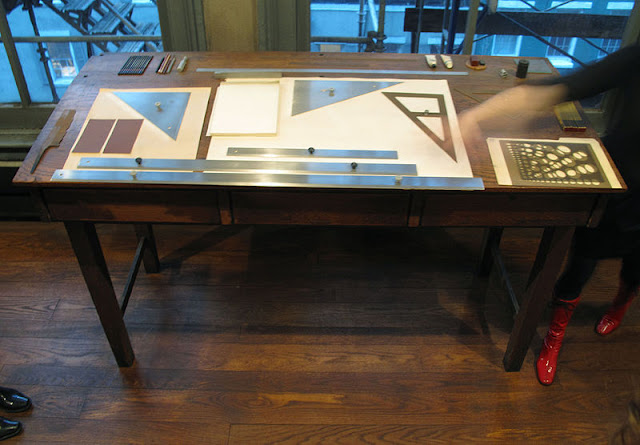 Despite my ribbing of anyone much further to the Judd side of the continuum than me, I’d have to say the other end is much more horrific. It is this zone – the antiknollian zone – where we find Francis Bacon’s studio. I’m sorry to leave you with this visual, but just to establish the other pole, here it is: 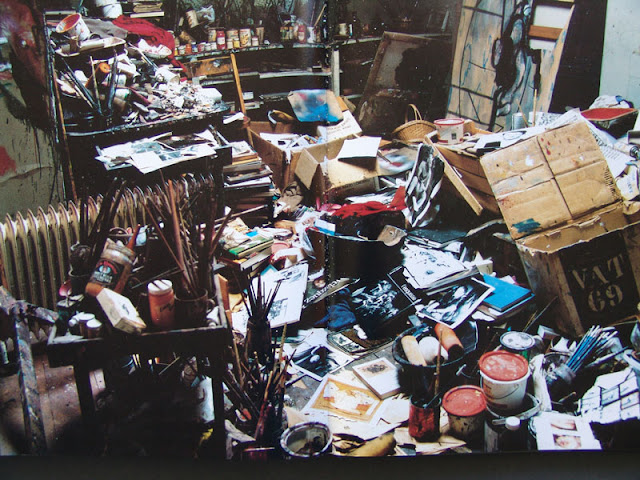 Everyone falls somewhere on the Judd/Bacon Scale, in which Judd’s studio would be a 1 and Bacon’s a perfect 10. (Editor’s note: for the sake of establishing our end points, Andy overlooked a .5 deduction for slightly out-of-square architectural templates in the photo of Judd’s studio. Also, for allowing someone to stand in the frame at a diagonal, something, for instance, hyper knoll-conscious Nazi Germany never would’ve allowed. I’ve been handed a note from the judge – he says it would have been a full point deduction but for the fact that the boots are nice.

Witness the photo below, in which Hitler is exhibiting the Deutcheckigrecht, or German squared shoulder, as troops march by in perfect unison. By the way, the soldier at the bottom center of the photo was demoted for turning his head 45 degrees to the left. Again, however, nice boots.) 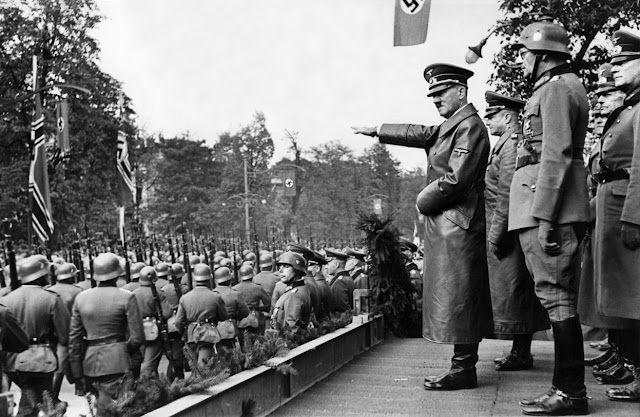 Seriously, though, I have pondered where I am on the Judd/Bacon Scale, and think I’m probably naturally about a 6.5 or 7, tending towards Bacon (as I’m wont to do any time bacon’s involved). I can feign Knoll, probably because I have a bit of German blood, but it doesn’t come naturally.
Doug Casebeer, Artistic Director of Ceramics, Sculpture, Furniture Design & Woodworking at the Anderson Ranch Arts Center, a.k.a. the Magic Kingdom for Artists, sent me a couple photos of his studio at the ranch, which is a sight to behold. As can be said of the arts center itself, Casebeer’s studio in the Soldner Ceramics Center has fun surprises any direction you turn. It’s an artwork in and of itself, and he’s even been approached by curators who’ve wanted to transport its contents into their galleries as installations. If you ever have a chance to take a workshop at the ranch, and you really should, you ought to stop by and say hello to Doug, and if you’re nice and he’s amenable, take a look at his incredibly rich space. Until then, here’s a sneak peek: 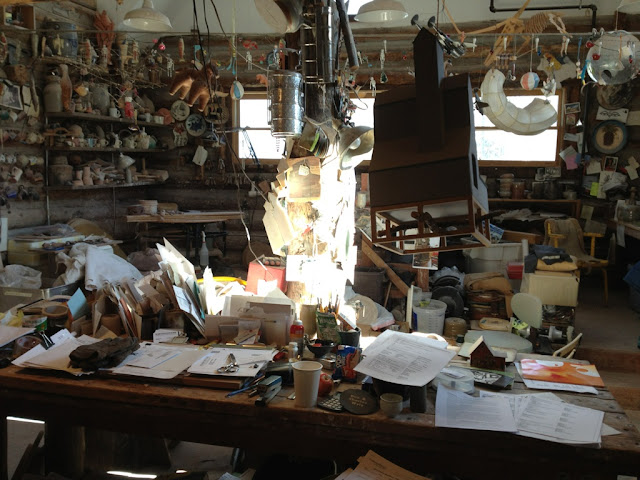 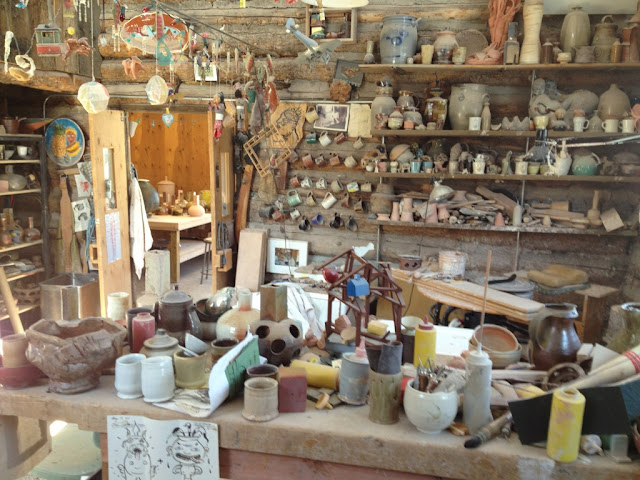 As you can see, Casebeer’s studio has surprises wherever you turn. What you might not conclude is that density doesn’t necessarily equate a Baconic propensity.
I wonder, though, where you’d say you and your work space would naturally fall on the knolling Judd/Bacon Scale. If you’re game, post a comment below including your Judd/Bacon number – remember, low means neat and tidy, high means you should set down your brush and pick up a broom. If you’re game and avoiding more important things (like cleaning your space), snap some photos of your work space and email them to me. Who knows? I may just juxtapose you with a fanatic failed world conqueror, too.
The Third Reich may be kaput, but this examination of the Judd/Bacon Scale? Hardly.
info@andrewtirado.com