Ground breaking began on a new art studio in Colorado Springs, Colorado in September of 2019, and the space was functional in January of 2020, just in time to begin work on “Highlight”, my public art piece for the city of Tulsa, Oklahoma and the Cox Business Convention Center.

I hired Prospect Builders of Colorado Springs to design the space and found John Hockman, who heads the business, to be a valuable and competent resource, as he’s a structural engineer as well as a builder. Due in part to budget and to the fact that I was sans-studio for the time it took to build the new space (with the old one being converted to a studio apartment concurrently, a project also begun by Prospect Builders), I did as much of the work as I could, including demoing a 1 car garage, operating the excavator, milling and attaching the siding, etc. 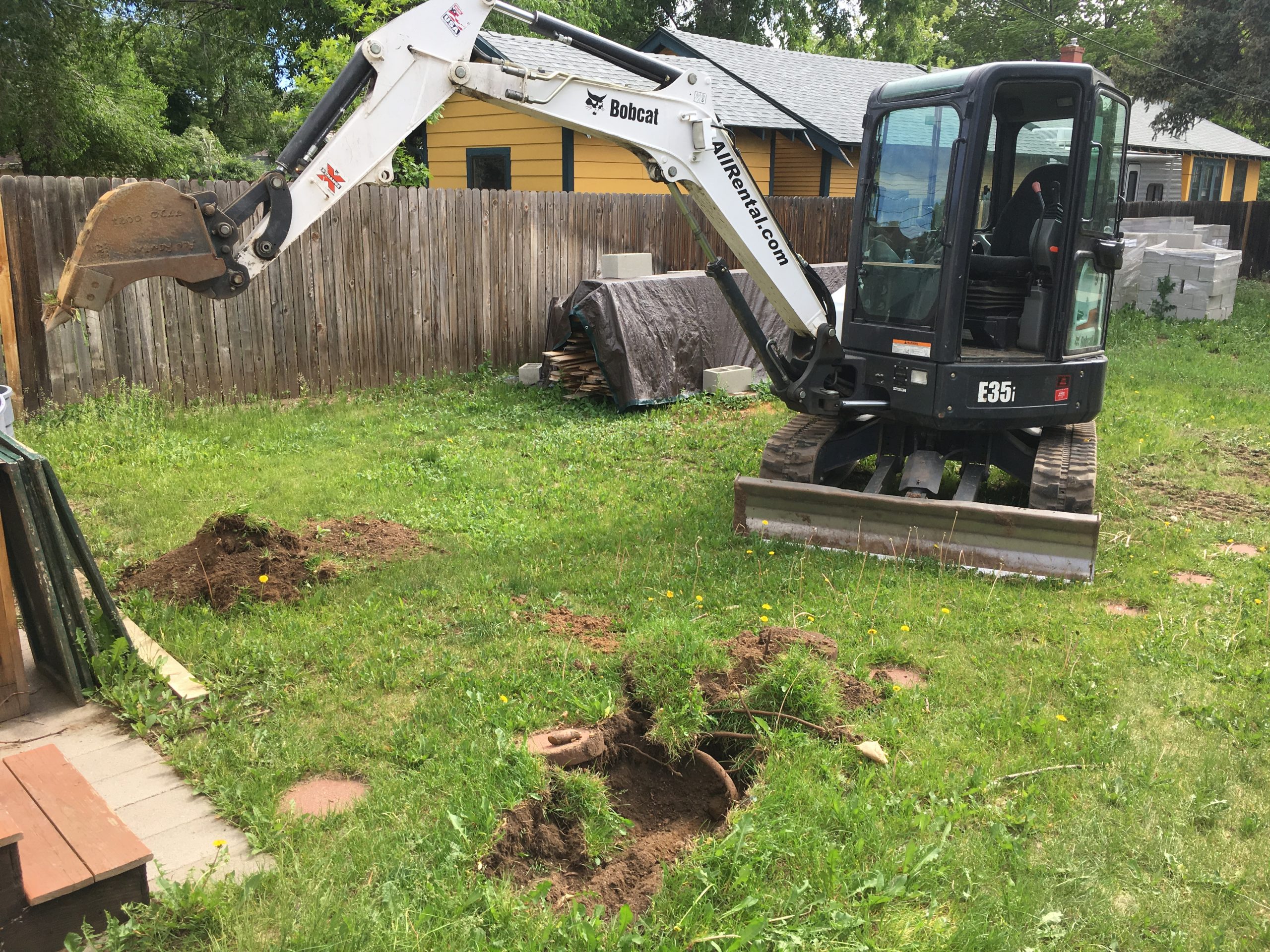 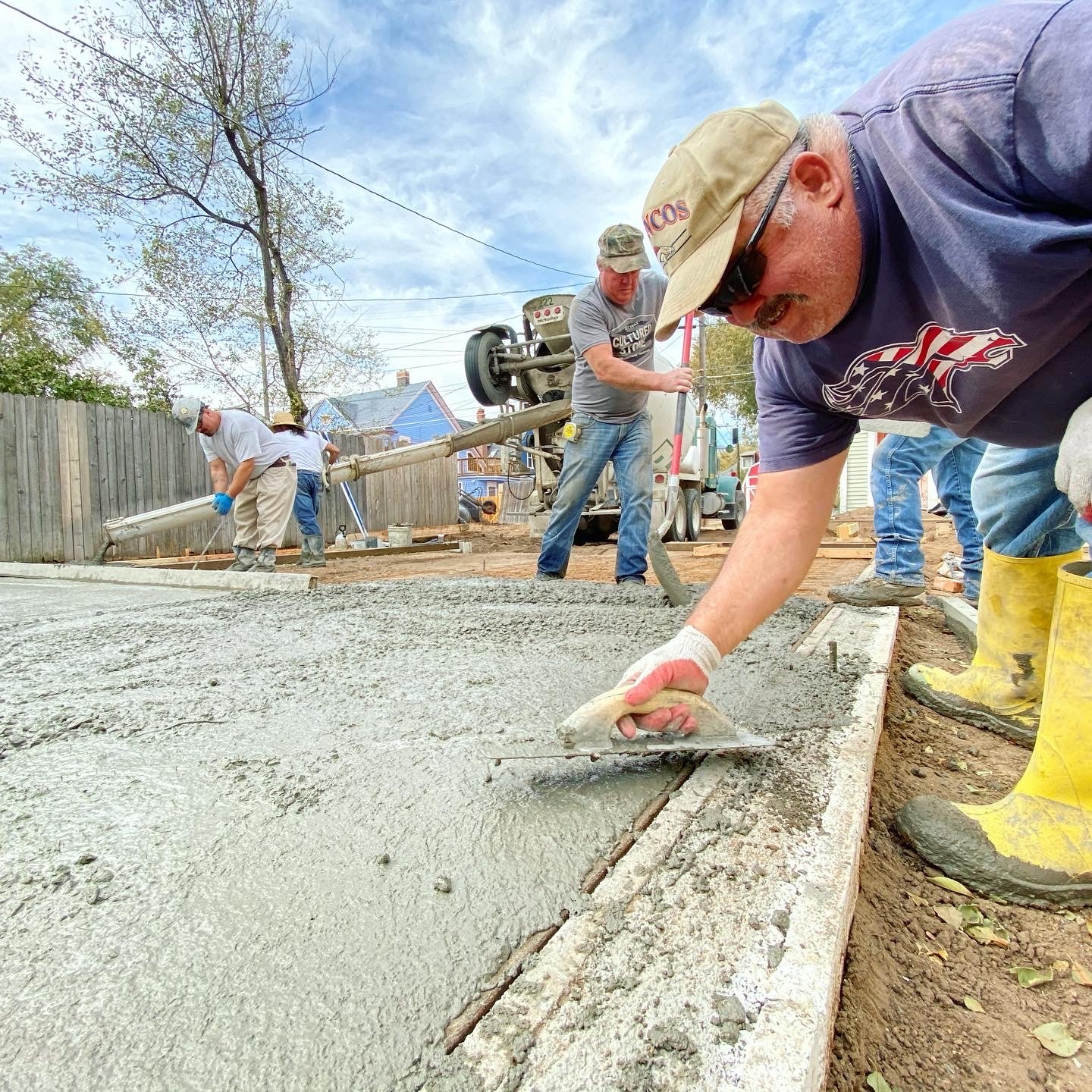 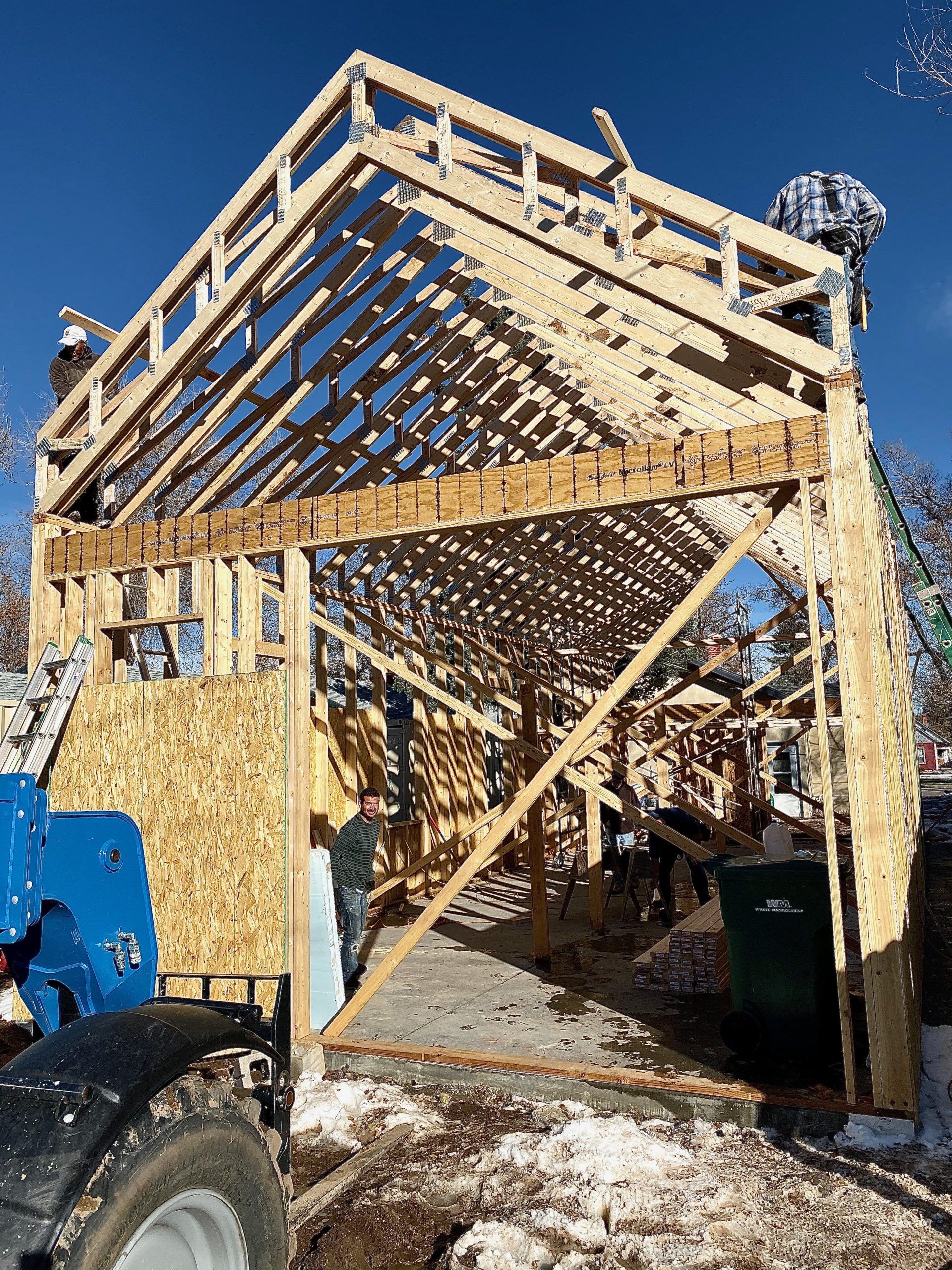 As for the design, the studio is a relatively long (50’), relatively narrow (20’) space, akin to a boathouse, with a cathedral-like ceiling as high as the zoning department would allow – nearly 20’ at the interior peak, with interior side walls at 12’. The two gable ends have doors large enough for a truck and trailer to enter, as well as personnel doors.

The Scandinavian sans-eaves look was a last minute decision. To me, rain running down the side of the building has an almost spiritual equivalency to the work going on within. 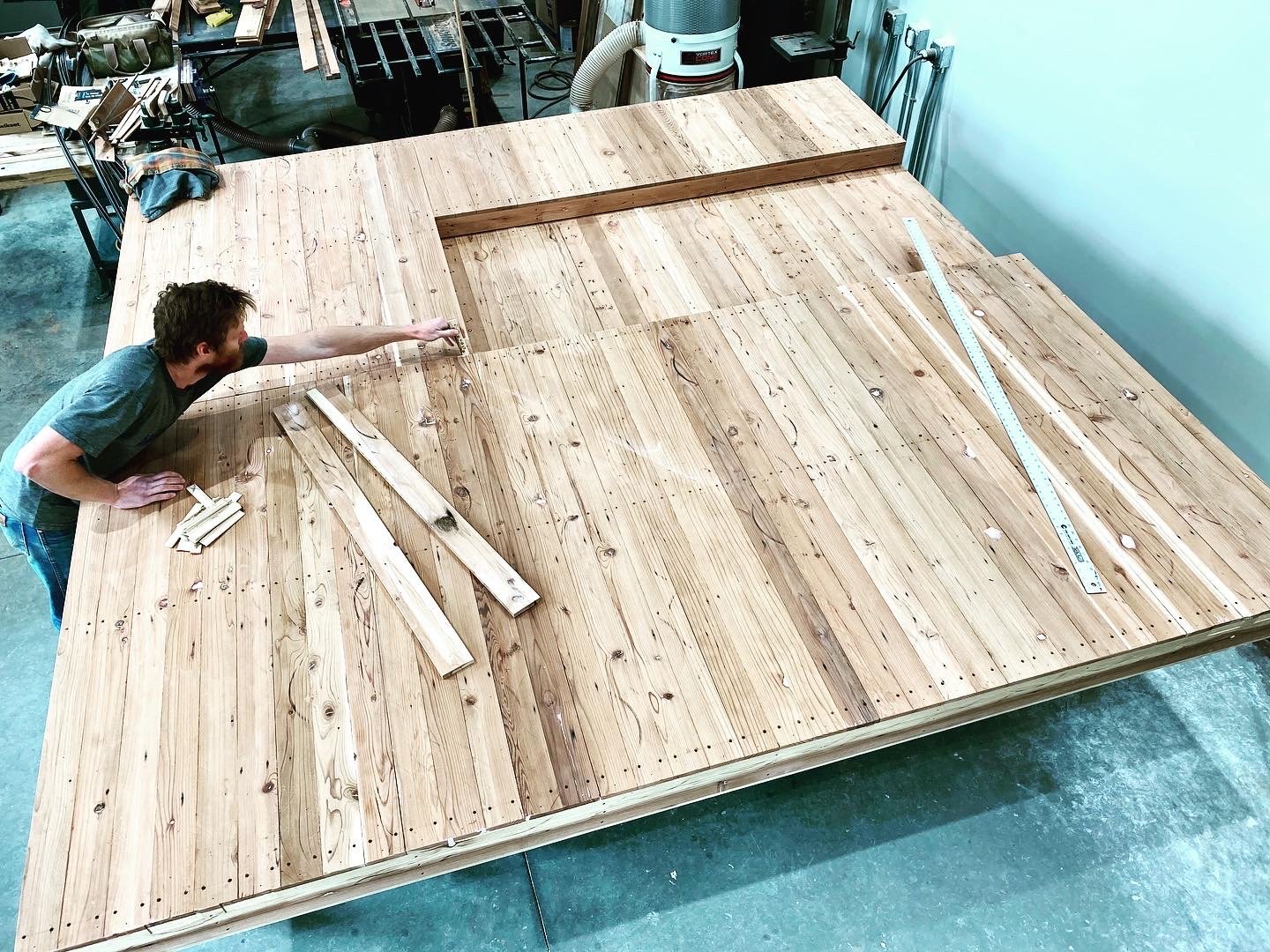 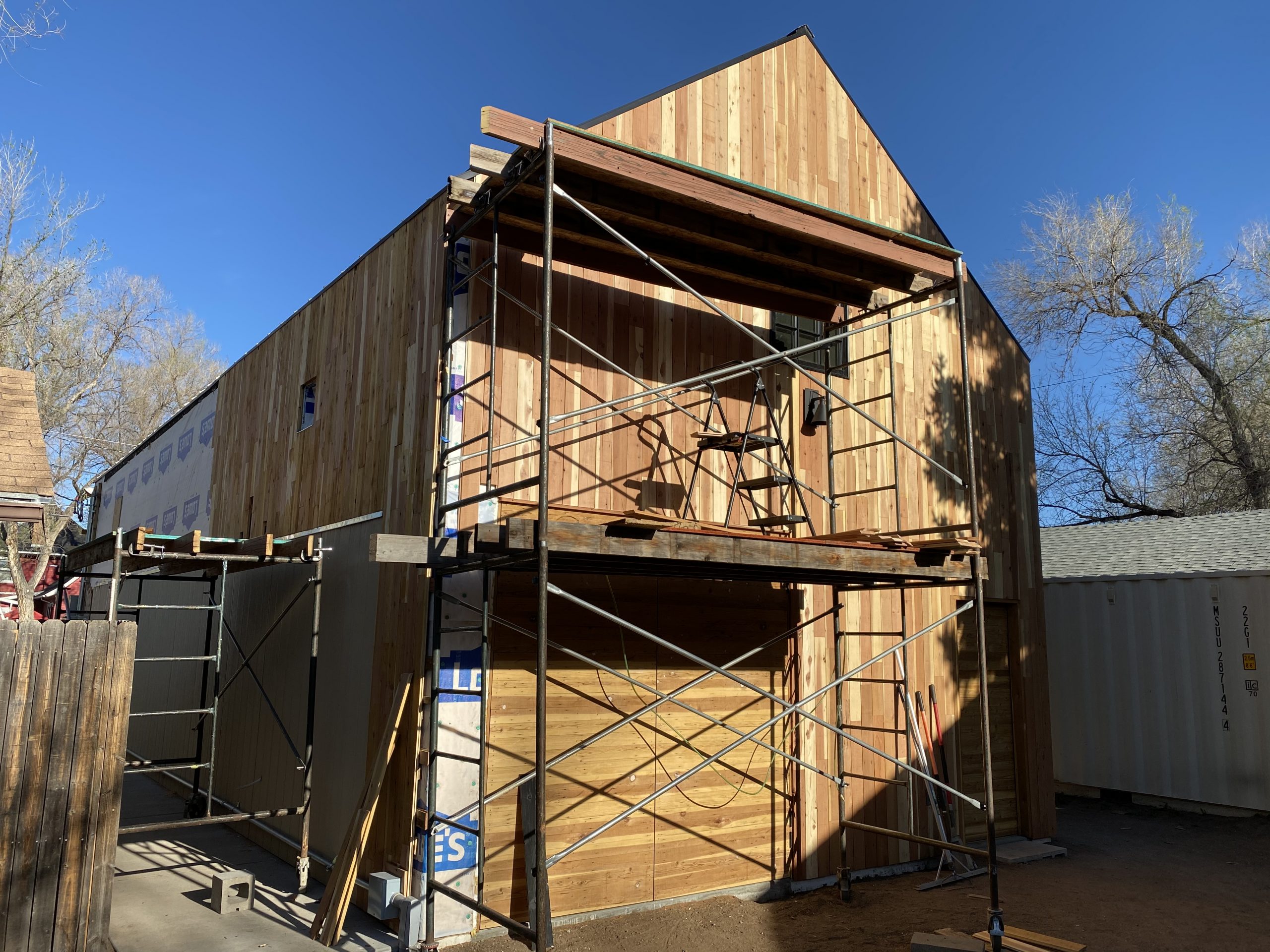 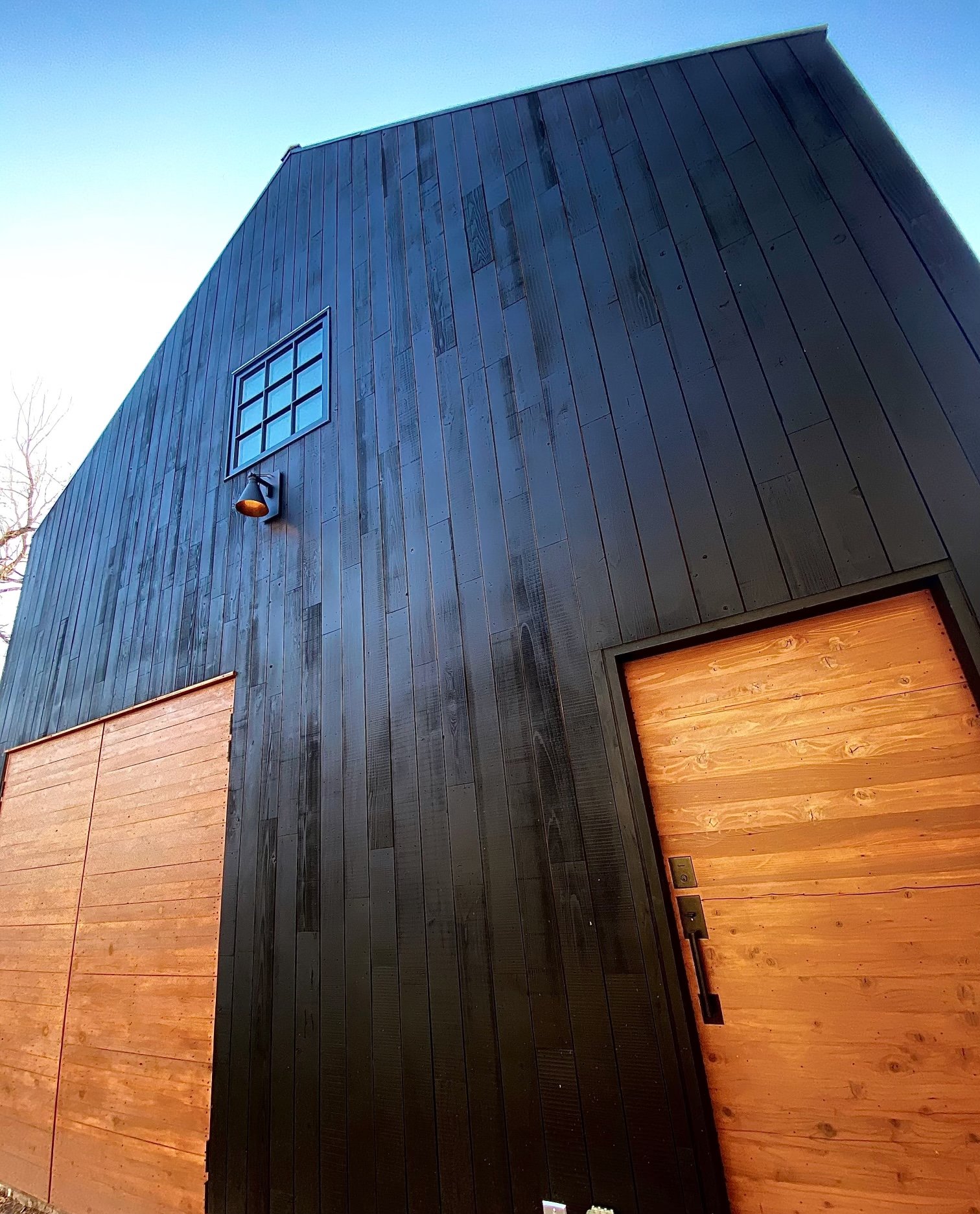 The studio exterior is nearly all black. The roof is black standing seam, and the siding is reclaimed redwood – the same stuff I use for my wood sculptures – which I milled and applied. Many people assume the siding is Shou Sugi Ban; charred cedar, but it isn’t, as budget wouldn’t allow. Just a couple coats of heavy body stain over, as I said, redwood – a good wood for exterior applications.

In contrast to the studio’s dark exterior (reclaimed redwood painted black with a heavy stain), the interior is fairly bright, with three walls painted white, a whitewashed ceiling (which took me five months to complete – nearly as long as the rest of the studio took to be built, and at least 2,000 trips climbing up and down scaffolding). The east gable end, where the 2D work takes place, is painted a mid-gray (to reduce glare around the work). The drywall is backed, throughout the space, with OSB so screws can be sunk in wherever needed. 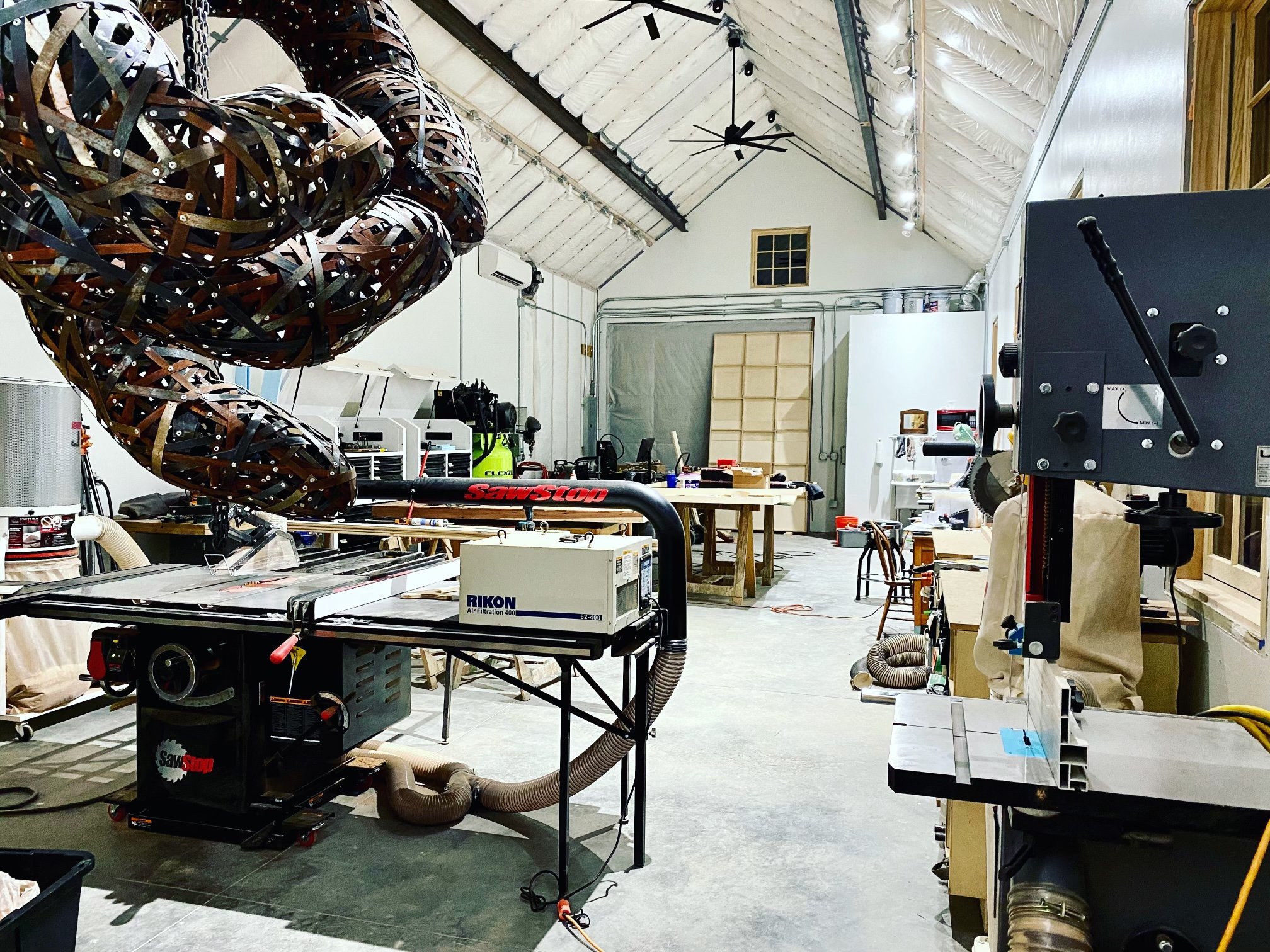 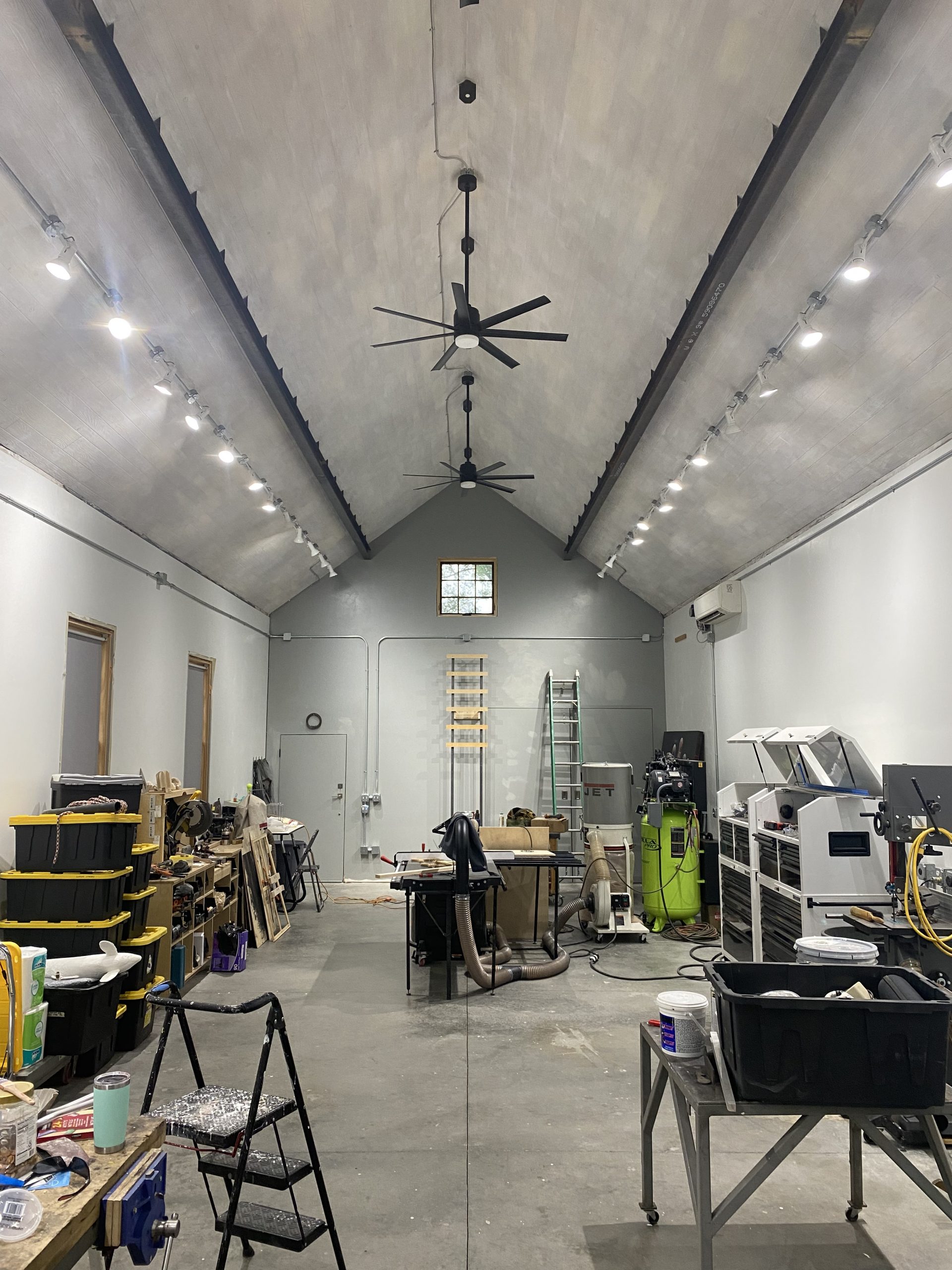 The floor is unfinished concrete, a necessity for fire prevention due to the prevalence of sparks from welding and grinding during some projects.

There are four windows on the studio’s north side and smaller ones, up high, on the gable ends. We put in two runs of shop-made ceiling-mounted lighting just above a ceiling-mounted gantry crane capable of lifting at least 2,000 lbs. The gantry crane has been one of the most convenient of the capacity upgrades, allowing heavy items to be pushed anywhere in the space with a finger, yet without taking up valuable floor space like a rolling gantry would. Also, as mentioned, a flatbed trailer can be backed into the space and heavy items can be loaded onto it with minimal effort. 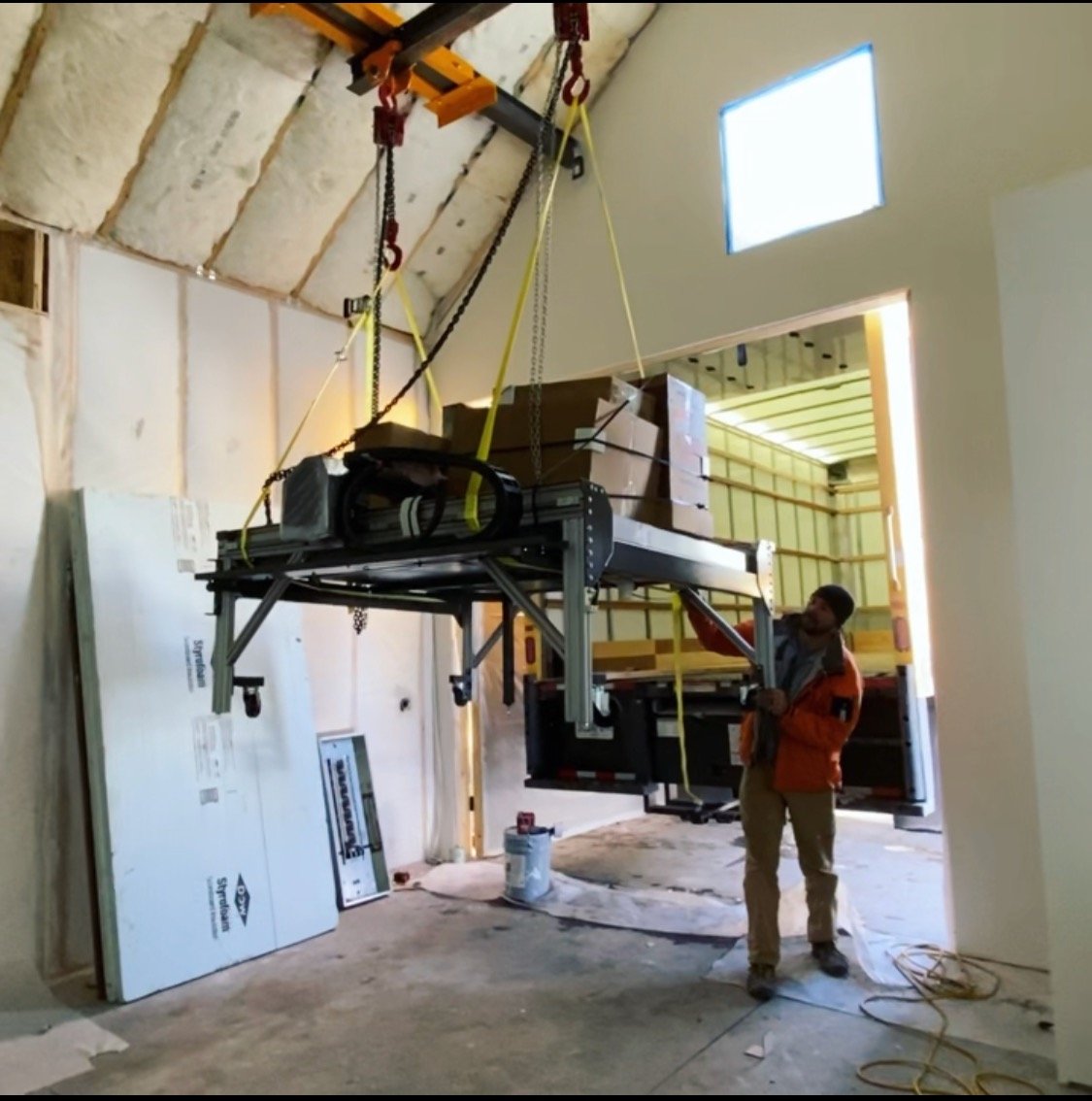 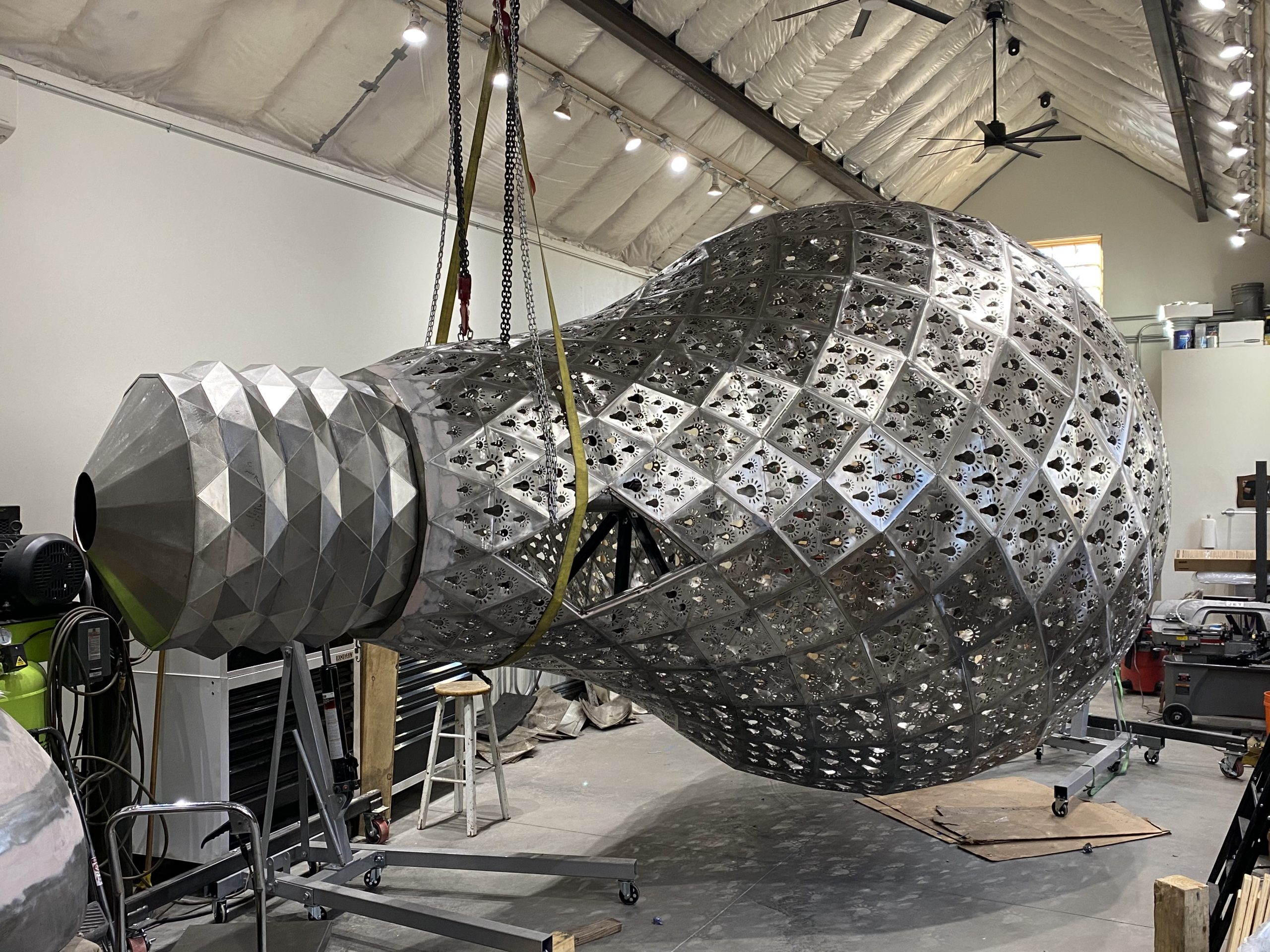 I can thank my next door neighbor for the studio’s lavatory. Initially I had decided against one, primarily due to budget limitations, but she convinced me to reconsider in time to add it to the plans submitted to the building department and I’m glad she did. The studio also has a stainless steel utility sink, meaning no more daily trips from house to studio hefting two 5 gallon buckets of cold water for rinsing glue rags and mixing acrylics, as was my practice for many years. Beezie – on behalf of my back, thanks! 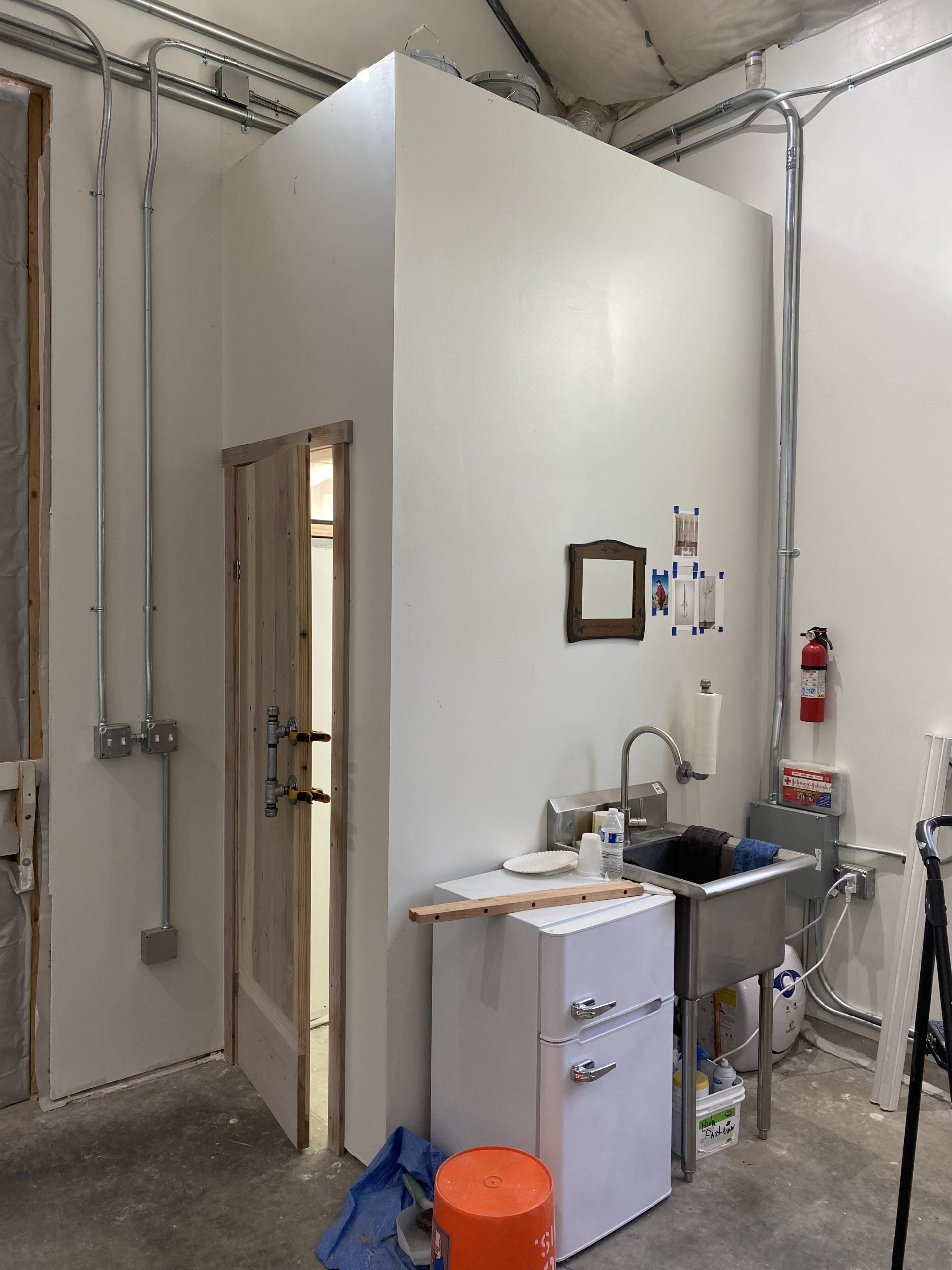 As for power, the studio has 110, 220, and 3 phase, all surface mounted conduit so that it can be more easily reconfigured if power needs change. Plus, I like the look of the conduit and copied it for the shop-built lighting rather than buy standard track lighting. I made sure the electricians sent out their best guys, and they definitely took pride in neat bends and plumb and level runs throughout the space. 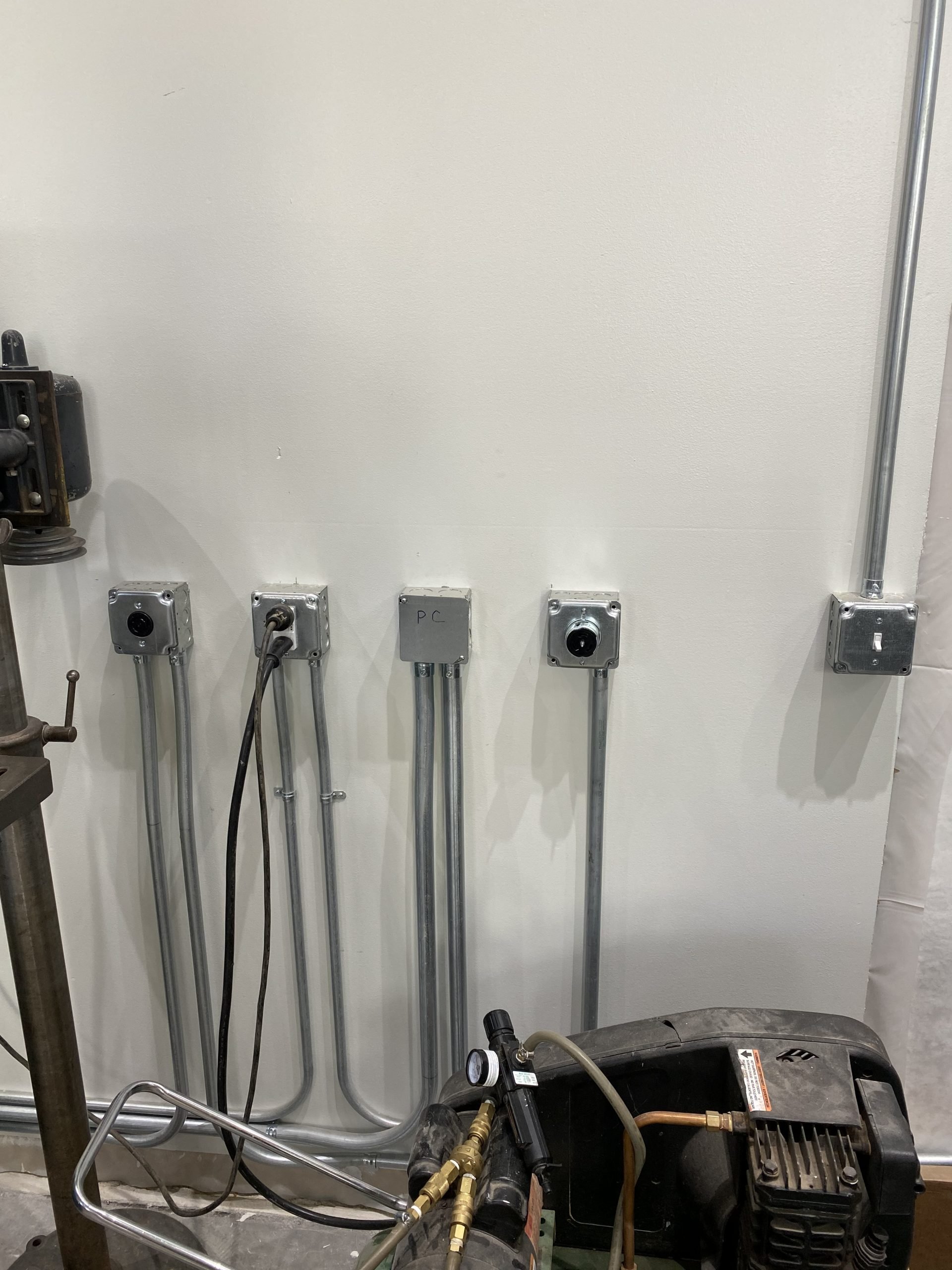 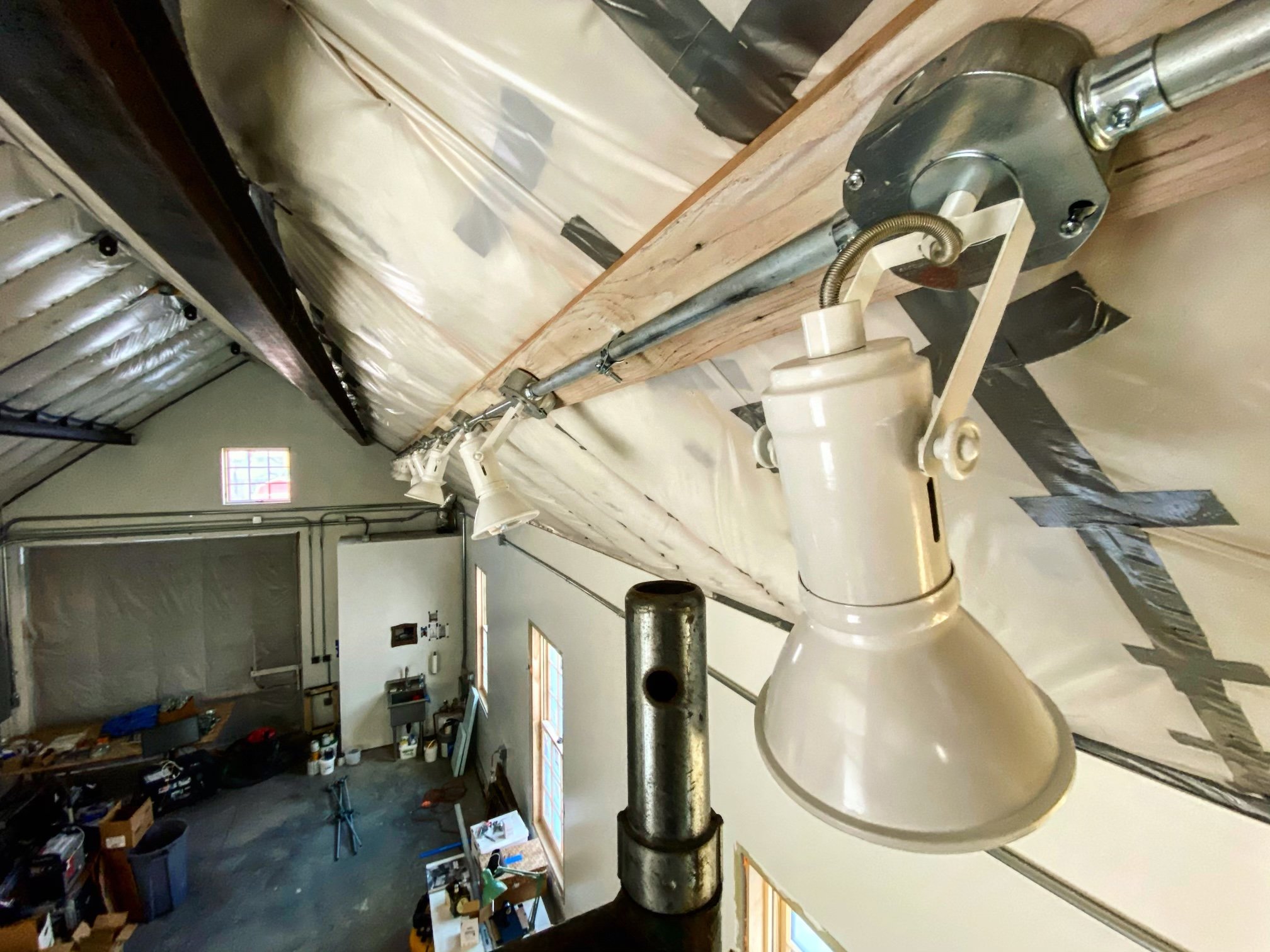 Two mini splits heat and cool the space, but the walls are well insulated with blown-in cellulose insulation, and the space’s three ceiling fans provide just enough of a cooling breeze that the AC is only needed for a few hours only on the hottest summer days. As for the space’s sound-proofing, if the doors and windows are closed, music can be blasted or steel ground in the space and one can hardly hear a thing outside.

I’m scratching my head trying to think of anything I wish I’d done differently for the studio, given the limitations of budget and maximum allowable square footage, but then I spent nearly three decades in a much smaller workspace – plenty of time to make a list of items I might want/need. Truth be told, it would be nice to have two art studios, one for “cleaner” work like painting and the other for “dirtier” work like woodworking and welding and such. Maybe a separate office space that stays dust free and more exterior work and storage space. But the lack of these are small inconveniences and hardly worth mentioning.

All in all, the studio has performed magnificently. There are only a few additional items on my checklist to complete the space, such as milling some reclaimed redwood and trimming out the interior windows. The utility sink, while a 99% improvement on having no water supply in the studio, is a bit small and I’d like to switch it out with a second-hand double sink with a sprayer head and the ability to attach a hose. One portion of the south wall needs to be drywalled. I had the drywallers leave the 12’ section bare in order to add a climbing wall there, but in the interim, changed my mind. The exterior north and east yard need landscaping. Just a few things like that. But the studio itself’s basically finished.

Back on the day of the concrete pour for the slab, I asked the concrete contractor to let me know when the wet concrete would be ready for me to write into, and once it was, I pressed “LIGNUM VITAE” and the year the studio would be basically ready for art-making, 2020, in Roman numerals. It’s right at the space’s entry, and I pass over it multiple times per day. Lignum Vitae. Tree of life. A place capable of providing shade, of providing nourishment. (And yes, I used a wood chisel. Never fear, it was none the worse for wear.) 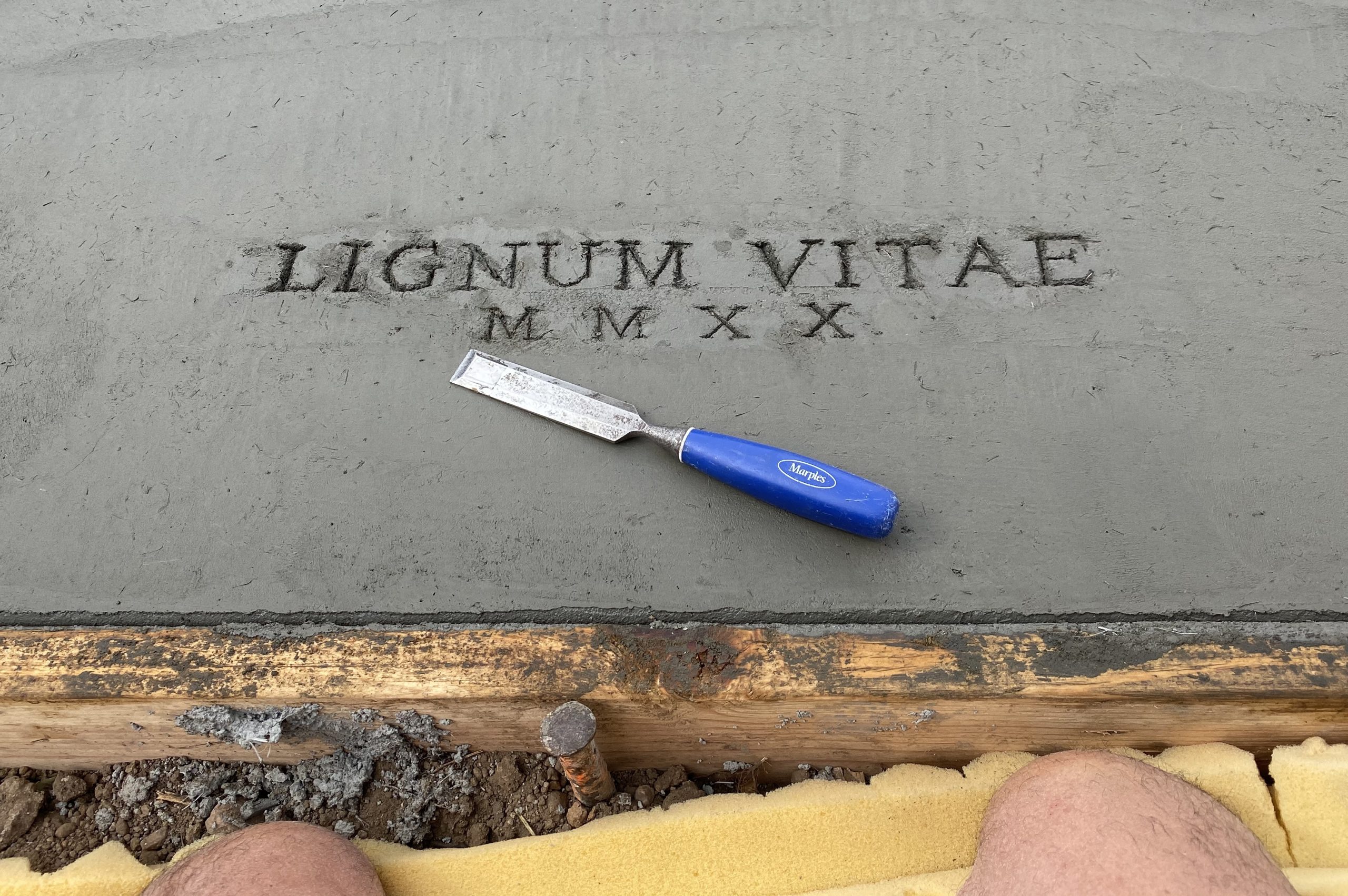 As mentioned at the outset, the 2 car detached garage near the back of the lot which was my studio space for decades is being converted into a studio apartment, and is scheduled to be completed, along with a second, smaller unit behind another property we own with contiguous back yards in downtown Colorado Springs, before the end of 2022. 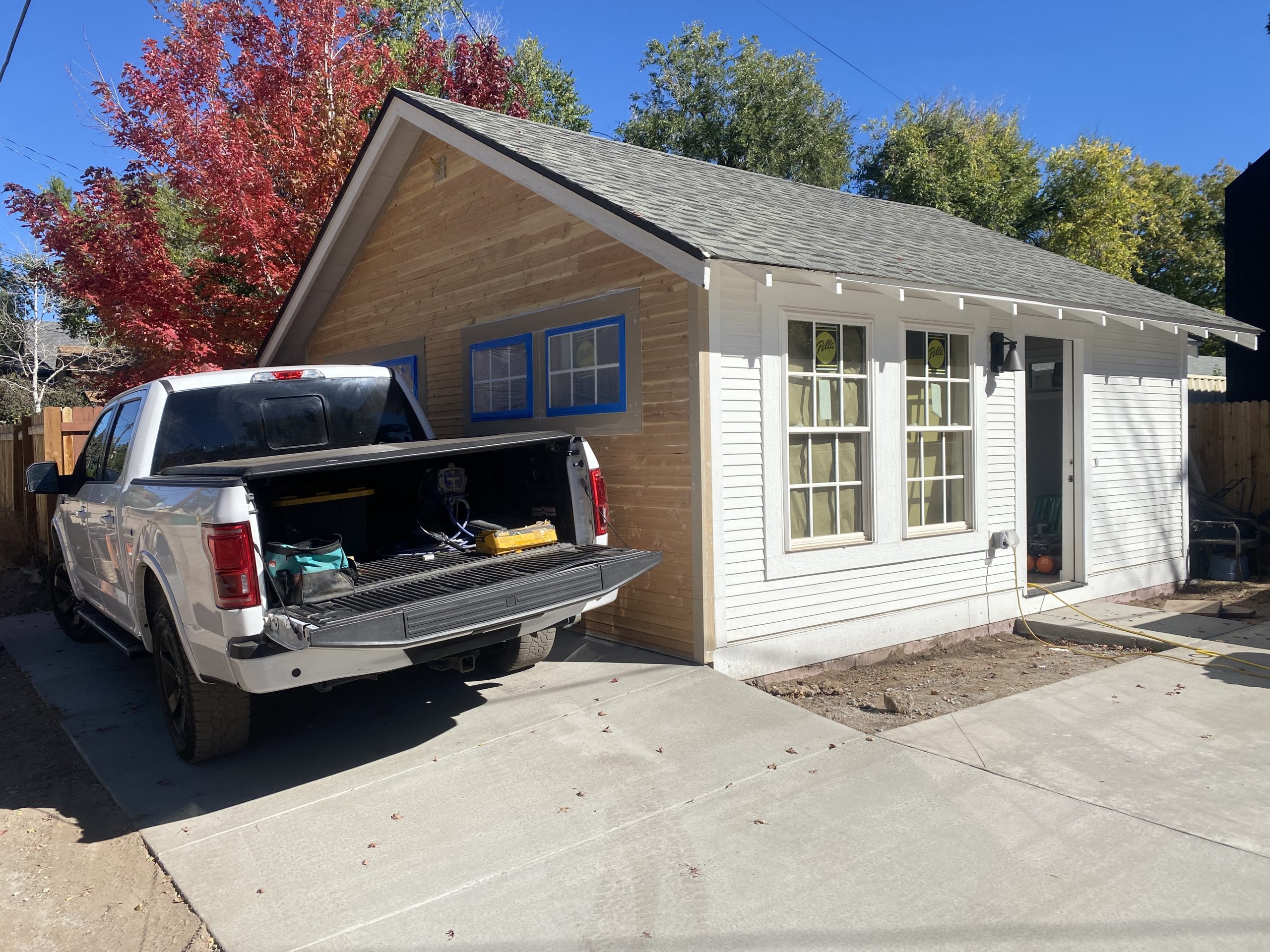 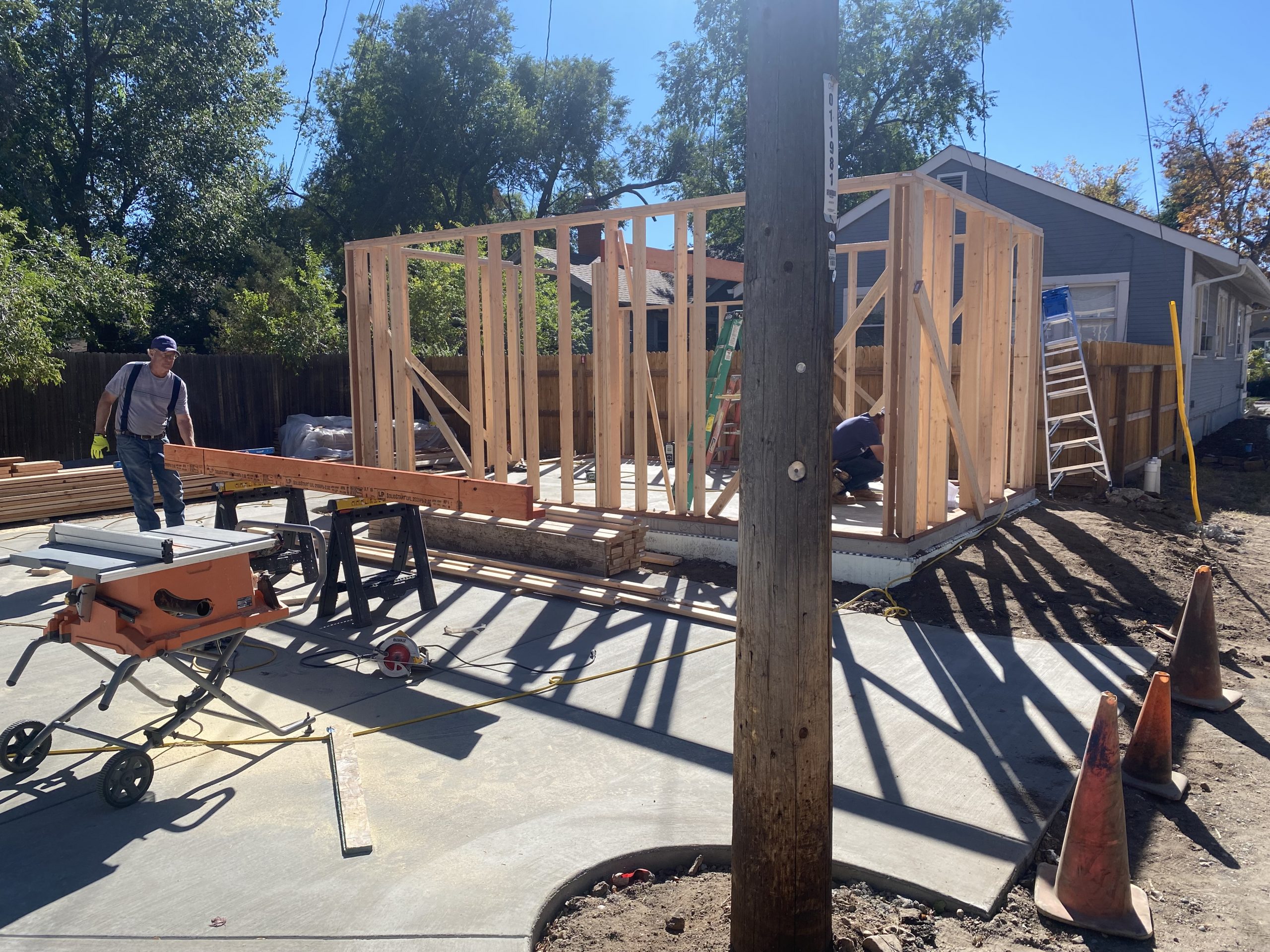