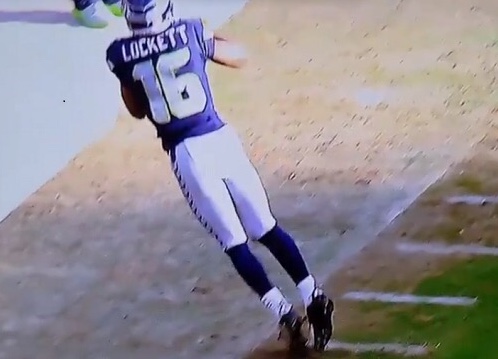 It was Mel Gibson-as-William Wallace’s final, dying cry in the film Braveheart as well as the way he made his entrance, having been shot out of a circus cannon, as Rocky the flying rooster, in Chicken Run.

In psychological terms, self-imposed boundaries are hinderances to success. Things like the fear of leaving one’s comfort zone, focusing on past failures, being unsure of what one wants, setting one’s bar too low, using negative language, and surrounding oneself with the wrong people, need to be analyzed, confronted, and overcome if we’re to become the people we can be and do the kinds of things we desire to do.

Yet, as it relates to art, it’s often the case that the imposing of limitations, counter-intuitively, often opens up rather than closes off new avenues of interest.

During the seven years I was a dedicated custom props, stage sets, displays, cabinetry, and signage builder, prior to working as a college shop tech, if I had to reduce the wide variety of things I made, in all manner of materials, to one descriptor, it would mirror Rocky’s grand Chicken Run entrance: far flung.

Yet for the past eight years, having been flung back into the art arena, if my work has been characterized by one thing, it’s the self-imposed limitation of one single motif: the human hand.

(That, by the way, but off topic, is about to change in a big way.)

Furthermore, early on in the development of my sculptural work I decided to ‘limit’ a good deal of the piece’s creation – the subtractive part – to a tool I’d never seen used as a sculptural tool before: the forstner bit, which is typically used for drilling flat-bottomed holes in wood (and hence I should say don’t try this at home, kids. There’s a good reason why you don’t see forstner bits used sculpturally as I have, besides the fact that their center spurs leave pock mark holes on the wood’s surface – something desired in my case. To wit: after a nasty forstner bit-caused hand injury, I learned to keep both my hands on the drill, safely behind the operating end of the tool.)

The impetus for both “restrictions” – that of focusing on the hand theme and using a tool meant for one thing in a way not only new to me, but probably new to the world, was in no way predetermined a la John Cage and his use of the I Ching as a decision-making tool. On the day I switched from the initial additive process to the need to remove the form’s extraneous wood, I didn’t enter the studio with a spinner board from the game Twister, lay out a bunch of random tools, flick the indicator, and choose whatever tool it ended up pointing at. It wasn’t an artificial ingredient of the creative process or the result of wringing my hands and exclaiming, like a disconsolate Auda abu Tayi in my favorite film Lawrence of Arabia, “I must find something honorable”.

It wasn’t “homesteading” – wasn’t searching for a seemingly ever-shrinking plot of available unclaimed artistic ground to pound my stake into.

To me, that approach seems to be putting the covered wagon ahead of the horse.

No, it was just one of the many interesting journeys that one takes that, for whatever reason, happens to touch upon a deeper resonance within. Something that says, “I could live here.”

There were personal motivations behind both of the above named self-imposed limitations. At the time I picked both up, however, I couldn’t have articulated what those reasons were. I’ve had to journey far with both for them to begin to comprehend at the head level what the heart seemed to know all along.

I’ve said a lot about the reasons for my hand motif focus, both on Art Regard and elsewhere, but haven’t talked much about why, just days into my return to creating art after 23 years of shelving it, I began using forstner bits.

The origin came from the period when I operated a custom prop making business.

There were many times during the creation of a prop when I wished I could leave the work in an unfinished state, prior to when the “art marks” were covered by primer and paint.

Like when I was partway through making two foam Travelocity-esque gnomes. 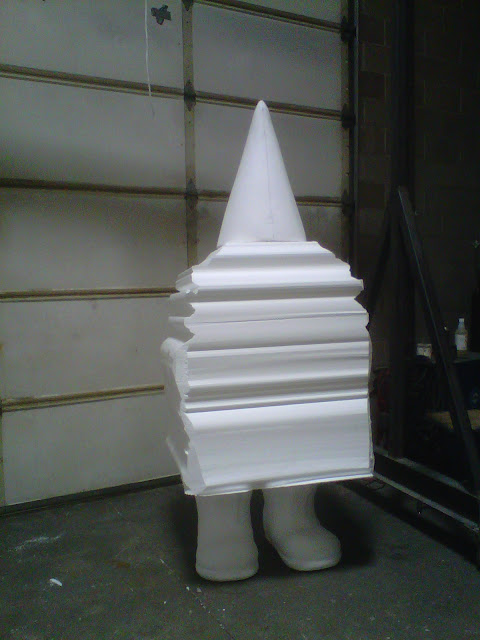 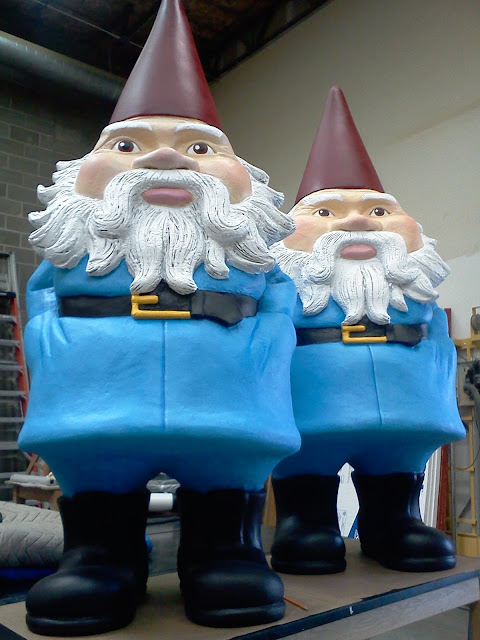 Another time, my brother and I were working on a large prop for Frito Lay that consisted of a tall foam figure holding up a large cauldron of fire. While most of the figure’s metal pipe-armature-reinforced body was carved from laminated blocks of foam, the hands needed to be sturdier, and so I made a pair of mitts from laminated poplar, and cut them out on the band saw. 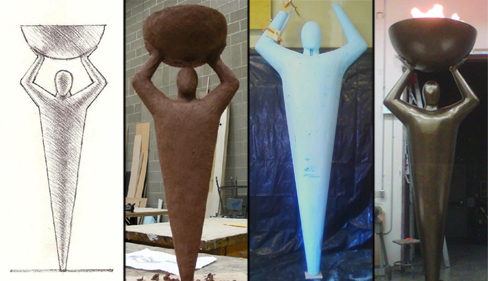 Then, I sat back and looked at them.

They needed to be shaped, both for aesthetics as well as to be able to easily connect and disconnect them from the convex cauldron that the figure was to hold above his head with a corresponding concavity; a shallow, palm’s up bowl. But how to do so quickly?

(As an aside, whenever I am presented with a creative problem to solve, I begin by searching the data bank in my head for previous solutions I may have tried in the past that may have some bearing on the current need, my knowledge of the available tools and machines, others’ solutions, a.k.a. Pinterest and YouTube, or a combination of all of the above.)

So, I brainstormed a few ideas. I could create a curved router carriage, like a skateboard park’s curved ramps, that would allow the router to cut… naw. However fun to make, the jig would take too long. As with many of my projects during this period, time was of the essence. How about using a carving gouge? Quickly carve out the interior and then sand the edges on the disc sander to make sure they were all… no, that wouldn’t work – the hand, being oblong, needed to curve slightly from heel to fingertip, too. The disc sander can only sand on one axis at a time, as it were. What then?

How about hole-cutting forstner bits? First, I could measure the hands from side to side and end to end, find and mark the palms’ centers, and drill deepest on the crosshairs. Then, in a radial, concentric-circle pattern, I might drill a bit shallower on the first circle ringing the center, and then, continuing with multiple, radiating, concentric circles, step up gradually, tier by tier, until the surfaces of both palms from fingertip to heel and pinky to thumb curved as evenly as possible.

It worked in my mind’s eye, and was soon confirmed in the flesh. 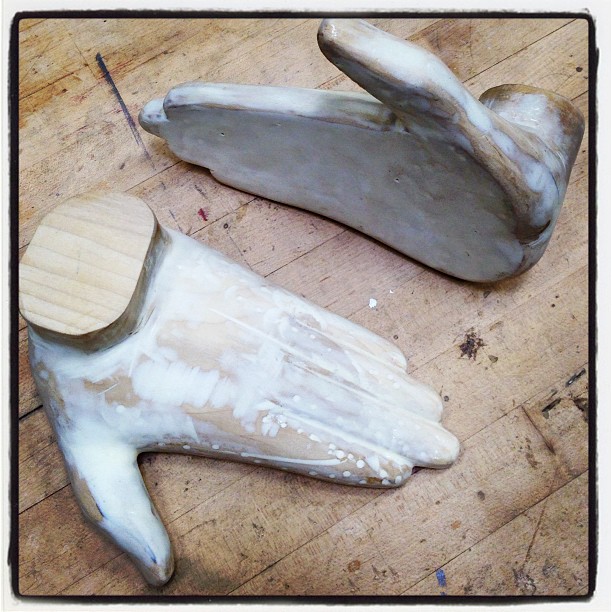 Once I’d checked the curve of the palms against the cauldron a few times to get rid of high points that kept the palms from sitting nice and snug against the form, I then turned the hands over. The hands still had a cookie cutter quality to them. While they didn’t need to look 100% realistic, some finger definition would be nice. Again, I looked at the available options. This time, a combination of wood chisels and the thin stationary belt sander seemed like the way to go. Only…

I flipped a hand over and looked at the palm again. The circular patterns the forstner bits had made were interesting. They kind of reminded me of those illustrations of how whales use sonar – the multiple )))))) marks had a kind of rhythmic quality to them.

Then I looked at the cordless drill in front of me, which still had a forstner bit in its chuck. Why not continue to pare down the edges with it? It might even save some time over using hand tools…

Having clamped the hands securely in a vise, I tried it out, and it worked great.

Instead, I filled in the low spots with a kind of epoxy primer, and then sanded the hands with the belt sander. Again, there were so many times during the creation of this or that project in those years that I desired to leave the piece in an unfinished state, when the ‘art marks’ were visible, but I had to cover them up.

Fast forward to the moment I needed to remove excess wood from the first hand sculpture I began in February of 2012. Again searching my memory bank, I recalled creating the much smaller Frito Lay hands.

What I didn’t recall, significantly, was much later revealed to me by my wife. Perhaps a year later, she said she remembered that I came home late one night with the two wooden hands I’d made. (My brother was working on the figure’s torso in my home studio, and when I brought the first set of hands for fitting, realized they were too small, so I made a second, larger set.)

I showed the original pair to my wife. She recalls my telling her that if I ever went back to making art one day, I’d like to experiment with making sculpture using forstner bits – a fact forgotten by me in the two years or so between the Frito Lay project and my first sculpture.

Of course, it’s also not lost to me that I was holding in my hands a pair of hands.

I’ll end my seemingly endless exploration of the topic of self-imposed limitations here, for now. Maybe someday I’ll explain how the term, as it relates to art, first came to my attention.