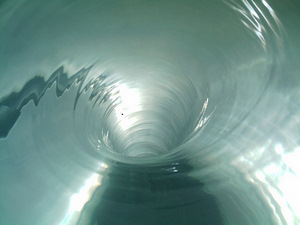 Yesterday, three Colorado College alums reached out to me and told me they’ll be back in town in the next week or so, and that they’d like to see me. Might I be available? Absolutely! Got me in a nostalgic state of mind, especially at the outset of the largest art project I’ve tackled to date.

Back when I was working as a sculpture shop tech for the Art Department at CC, I once asked a studio art major whose thesis exhibition was bearing down on them like a freight train if they could provide me with an analogy not only for what they were currently experiencing, internally, but for the entire, demanding, senior year “Senior Seminar” experience at the school, which encompassed app. 6 – 7 months.

Instead, they gave me two:

I laughed, and countered with one of my own: From my perspective as first-hand witness to both,

it seemed a bit like pregnancy – like the nine month period from conception to the birth of a child.

See, at the outset of studio art majors’ senior year, they receive a studio space. Department faculty expect the students in turn to spend a copious amount of time outside of their regular course load in their studios, developing art that, it is further hoped, will result in a unified body of work toward the end of the school year. Most students exhibit their work in a “solo show” in one of at least a half-dozen venues on campus for one week, although a few shows consist of the work of two students. 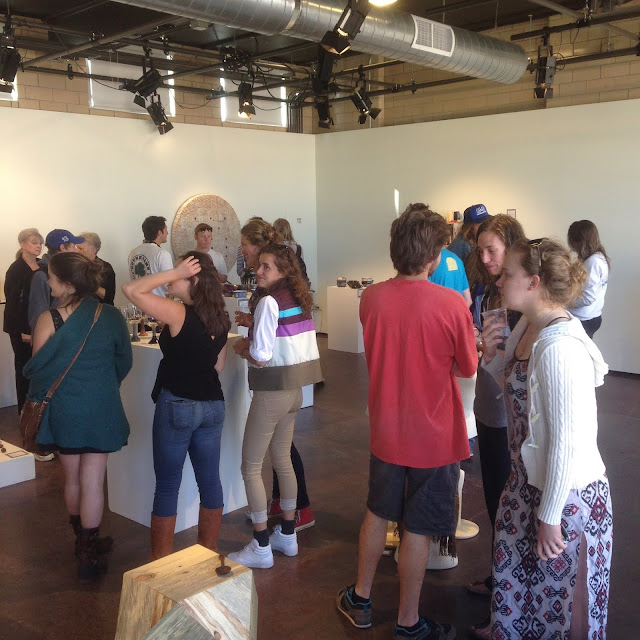 Whether their show is solo or not, it’s a tall order. Such a comprehensive show is something rarely required even in more supposedly intensive BFA programs, with their much lower bar of participation in a group show (requiring less work from each student) just prior to the awarding of a degree.

As with pregnancy, during the first few months of a studio art major’s senior year at CC, it can be hard to tell if students are making much progress toward delivering a “healthy” thesis show. But toward the “third trimester”, especially in the few weeks just preceding their show’s scheduled opening (or, ahem, days, for a few procrastinating types), the energy level and productivity increases visibly. For some, dramatically – and by that, I mean the shedding of tears.

If you’ve been a visual artist for any length of time, you probably know the feeling.

The renowned artist Jimmy Grashow, who introduced me to my oft-repeated phrase, “Inchy by inchy, Leonardo da Vinci”, gave me another apt analogy for what one experiences, particularly internally, when they take on a creative project, whether time-based or not, and it dovetails with the CC Studio Art Senior Seminar experience.

an inexorable current circling the subject matter. After perhaps an initial jolt of excitement wears off, one’s proximity to the project’s end – still at some “distance” from the project’s eventual materialization – allows one to return to a fairly baseline internal inertia.

Over time, you gradually funnel in from conception to fabrication/execution to realization/installation, ever closer and seemingly ever faster. If you weren’t at the outset, you typically become increasingly engaged during the process.

The closer you get to the project’s realization, the more the whirlpool’s powerful current takes over, making what might have initially been well nigh impossible – back to back to back all-nighters, for example – not only possible but relatively easy.

As the center of the vortex is neared, one’s energy level is almost palpable. Witnessing studio art majors from a safe distance, the closer the calendar gets to their show’s fateful opening date, the more likely I would detect a tell-tale hint of panic in the eyes of a fourth year studio major. A more frenetic pace. 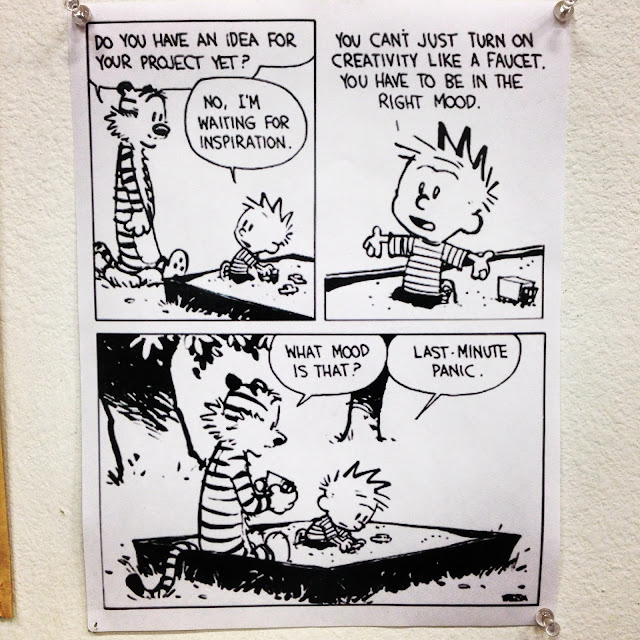 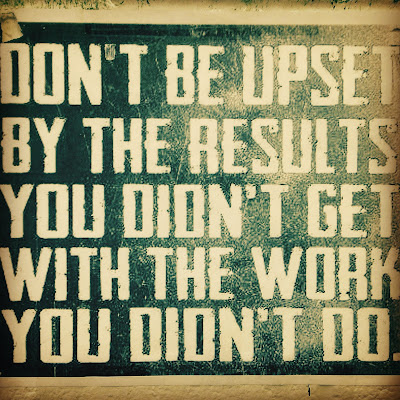 One of the last things a student will do, which, as with providing appetizers for their show’s opening day, isn’t compulsory, is design an invitation to their show, have it printed, and distribute it to friends, family, and art department faculty and staff. Very often they’ll put a lot of thought into their invitations; they’re usually an art form in and of themselves.
My office door at school was festooned with a good number of these announcements, and I’d often find students, especially seniors well into their vortex, looking them over to get a gist of the creative variety.
The invitations stood, and yet stand, as a kind of testament, long after the art has come off the walls, to effort. Sometimes more and sometimes less, sometimes more physical and others more mental, but effort. Time and effort and even blood, sweat and tears – and heck, I’m just talking about the midwives’ – the faculty and staff’s! 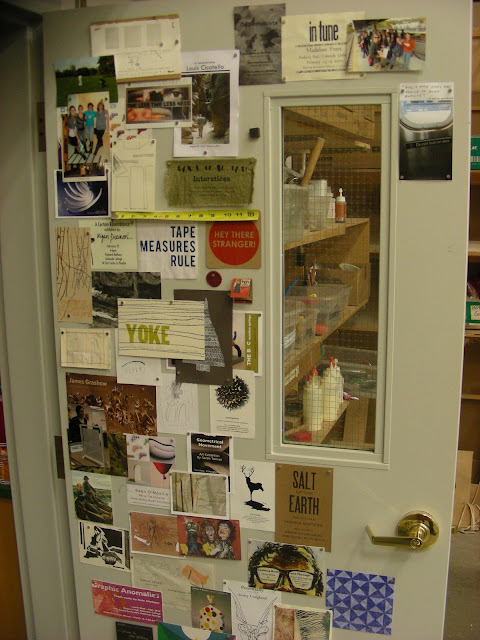 They say what doesn’t kill you makes you stronger,

and I’m sure hoping that’s the case for me, as I begin my slow but inexorable clock-wise (wait – northern hemisphere – would that be counter-clockwise?) rotation around a public art project whose “drop dead date” is only months out, not a year or two as is more typical of permanent public art commissions.

Somewhere within my desk at home, I have a rubber-banded pile of all the show announcements I was given by CC students in the all-too-brief decade I worked at the school. There was no way I wasn’t going to take them with me when I resigned in 2016. Imbedded within each are scores of memories of precious individuals I was blessed to get to know, often under very trying circumstances.

Perhaps I ought to pull the announcements out before too long, both to reminisce but also, should it be needed, to sit as a kind of silent testament, next to the gift the school gave me one year of a polished granite plaque inscribed with “Andy Tirado – Mentor”, that as pressure-cooker difficult as things might get for me in the next few months, working with various timelines and putting out fires and dealing with governmental red tape,

none of the show announcements were ever delivered posthumously.