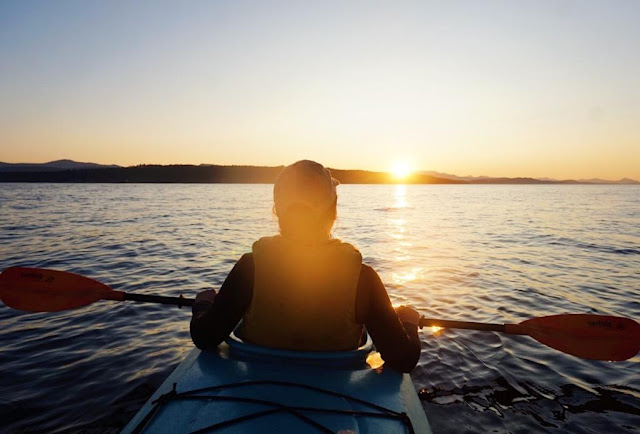 Late last month, my wife, our son Nate, daughter Sophie, her husband Erik, and I flew from Colorado to Seattle, and then took a rental car a couple hours north to Anacortes, where we got on our first of nine eventual ferry rides across the waters of the Salish Sea on an eleven day, sun, scenery, relaxation, and even a bit of rigorous exercise-filled vacation. 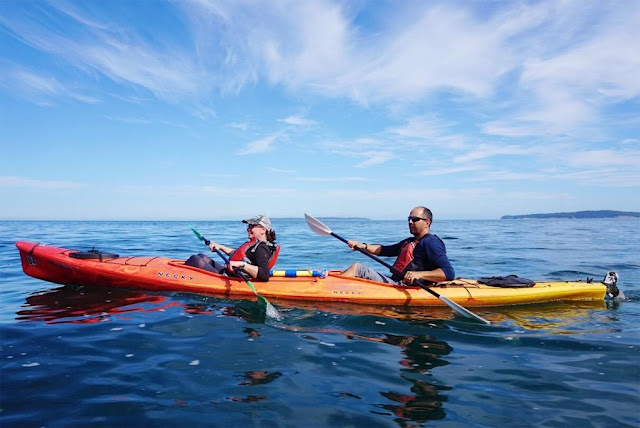 Whenever possible, we were on the water, be it on a whale watching boat, a kayak, or a ferry. Each had their own kind of enjoyment – with kayaks, you can watch the wildlife up close and personal, such as when a curious harbor seal pup “sniffed out” the tandem kayak Nan and I were in one morning, touching it with his nose a couple times, or watching a humpback whale from perhaps 25 yards away. Or watching the scenery from the deck of a ferry. 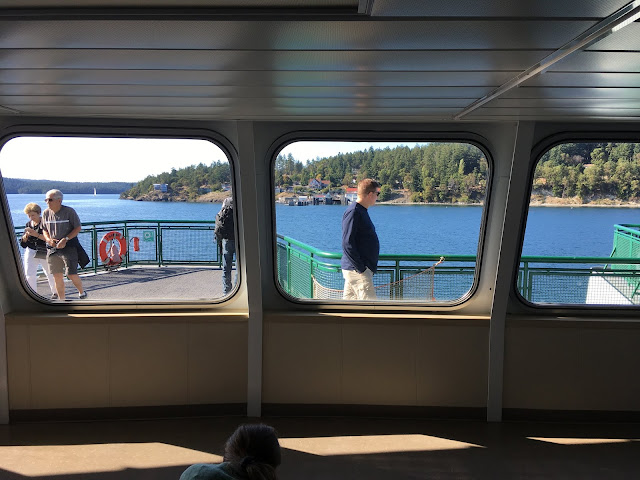 A few of our ferry rides were free – if you’re a “walk on”, you don’t have to pay anything – but for four of them we had our rental car along, and compared with flying, for distance traveled, let me tell you it isn’t cheap. Then again, when flying, one doesn’t bring a camping gear-packed Four-runner as a carry on.

The ferry rides’ cost was the only real downside. For those living on the islands, perhaps ferry travel gets old, but as I said, I really enjoyed it, and found myself hanging out on deck whenever I could. 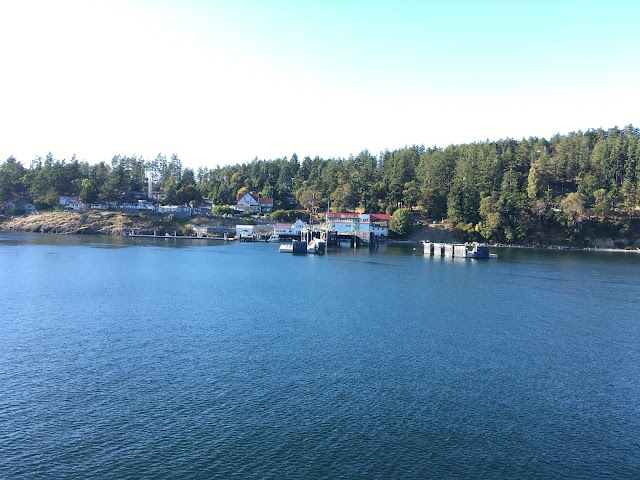 My favorite ride was the morning we were enveloped in a thick morning fog, leaving Orcas on the first of three ferry rides to Mayne Island, BC. Despite the deep, eardrum-near shatteringly loud blast from the fog horn now and again, I watched the perhaps 200 yards of water visible ahead from the second deck along with the two extra crew members on fog watch, one in the control room and the other standing at the bow on the main deck, who would point a rigid arm like a clock arm in the direction of something in the water he thought the ship should steer clear of, like a large log.

Not that the ferry could change direction that fast. Despite only traveling around 20 mph, the size and weight of the car and truck-loaded ferries made quick maneuvers impossible. Travel was slow and smooth. With eyes closed, like the cute older married couple we saw sleeping on board, one might not even realize they were on the water. 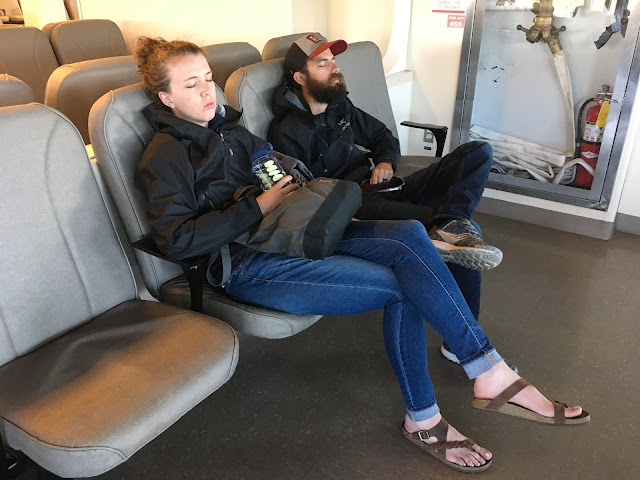 Speaking of married, a few weeks prior to the much-needed vacation, on our son Will’s wedding day, who should show up but JoAnn and Jeff Jones, who currently live in Kansas City. JoAnn is a super talented interior, set, and exhibit designer who, for a good, long stint starting in 1998, kept food on the Tirado table by hiring me for numerous typically film & video set build projects, back when they lived in Colorado Springs and when I was just cutting my eye teeth as a multi-faceted fabricator/builder.

JoAnn and I reminisced a bit, as we shared in the joyous and blessed occasion of Will and Hannah’s wedding day on a sunny summer day in Black Forest. 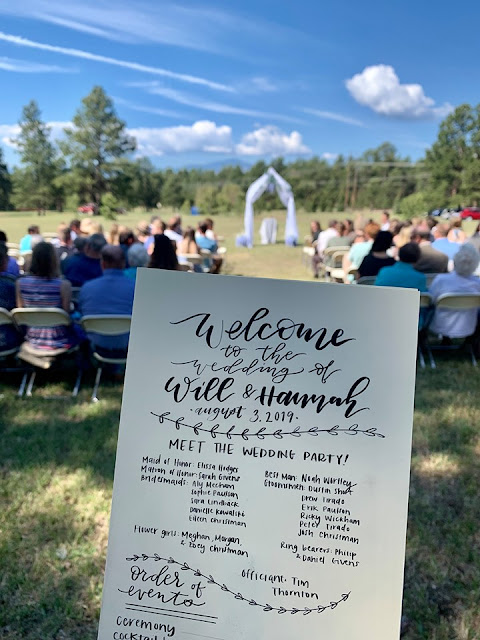 Among our recollections, I related to JoAnn the first time she asked me if I would be interested in building a relatively small stage set for her – how momentous that was for me at the time and how piquant it remains to me to this day.
I’m frequently amazed at the memories my wife and kids recall about the “wonder years”. Why, take just last night, at the dinner table, for example. Our daughter Sophie is now 28, married to Erik, and, in a couple hours, about to be driven, along with their friend Ricky, by yours truly to the Denver International Airport, from which they’ll fly to Venice, Italy, and from there, don their backpacks and point their hiking boots north toward the Dolomites for a week and a half of no doubt strenuous and gorgeous backpack adventuring.
Anyhow, last evening she and the other kids present laughingly reached way back and recalled the ubiquity of the post-bedtime ritual of mom and dad watching a movie and eating popcorn or ice cream in the evening – how they’d reappear in the living room, eyes fixed to the tv screen, and proclaim how they were thirsty, or offer up some other reason they needed our assistance. And here’s the thing – it wasn’t just a general recall, but specifically what she wore and the stuffed animal she carried under her 3 or 4 year old arm.
Heck, I don’t even recall what stuffed animal she mentioned last night, let alone a quarter century ago. (Nan just reminded me: an Orca whale. How apropos.)
I have my own vivid memories.
Many are, again, of things that connect with in my work-related wheelhouse these days. Especially from the more formative years when I was on a steep learning curve, back when JoAnn and I worked together, there are a preponderance of work-related memories which, having been burned into my mind, can be recalled with ease.
Now, the reason the particular time JoAnn hired me was top of mind a month back was because at the time of the wedding, I was working on a proposal for a public art project with a budget that, had I been awarded it twenty years ago when I was just starting out as a designer/builder, would have caused heart palpitations if not a full-fledged heart attack at the age of 30.
I’d mentioned it to Nan, my wife, already – my contention, since confirmed, that should I receive the public art commission (woot!), I felt that it wouldn’t move the needle for me as much as that comparatively much, much smaller-scale project did, the first time JoAnn hired me directly.
Don’t get me wrong – when I got the news a couple weeks back, hours before our vacation, and multiple times per day since, I’ve been filled with gratitude. But just as I’d felt would be the case, and as I told JoAnn on Will and Hannah’s wedding day, it didn’t move my internal excite-o-meter nearly as much as did that first job JoAnn entrusted to me. It wouldn’t cause me near total sleepless nights and such.
Ok, ok, so I did get up at 3:30 am this morning. But again, and I’m sure you can look back similarly at your life and find something comparable – with the layering of time and experiences comes a settling down, an easing back on the throttle (or, as it is hoped with our son Nate, 15, who is learning to drive and despite doing great, hasn’t yet graduated from lead foot, pressing too heavily on the gas and the brake. Eventually he’ll ge there – it just takes time.) For some things, it takes years – decades.
It’s kind of like taking a ferry ride on the Salish Sea. The typically calm waters of the straits and bays could nary be felt by the ships as we carved a steady path through the water.

But every now and again, especially when a smaller craft passed over more open water, I noted how much more the same waves that I could barely feel on board the ferry caused the other, faster boats to wildly pitch and bounce. Why, on our last ferry ride, the day after Erik and I circumnavigated Mayne Island in a tandem kayak, I was somewhat saddened to point out to Nan the spot where the water had been so rough, in the kayak, that we were taking in water and nearly couldn’t round a rocky bend. On the ferry, it looked like a piece of cake (beware, anyone hoping to circumnavigate Mayne opposite the current!)
In closing, I’ll be sharing more news about the current project soon. While I’m thrilled about it, I’m also thankful, and again I think this comes with the “territory” (having hit the half century mark late last year), that I’m ok with my slower and steadier internal disposition. Getting there’s half the fun. 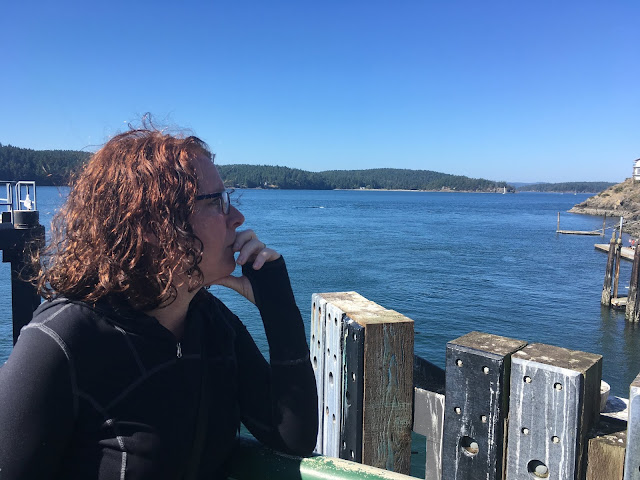 As we take off on a another gorgeous ferry ride from Orcas to San Juan Island, Nan wonders why there are so many Yellowjackets on the islands.