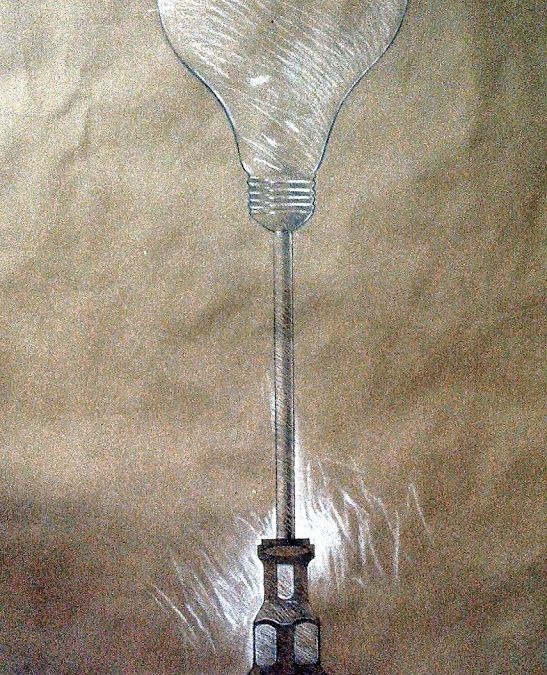 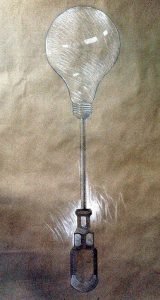 Light Driver, pencil and conté on paper, 2008,
Andrew Ramiro Tirado
I just switched the light on and opened the laptop to my blog’s “Create Post” page, and note that once again, as always,
there are so many directions I could go in today. I’ll probably go the Walsenburg route.
Hmm… the direction this fluid medium, be it this blog platform or my Breville-made starter fluid, is taking me in reminds me of a t-shirt logo I created for my 2014 class at the Anderson Ranch Arts Center. 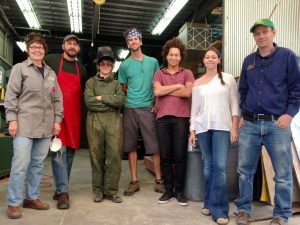 Back in 2014, near the end of the one-week class I taught in the sculpture studio at the ranch, I got out a pad of paper, a pencil, and a Sharpie pen, and began to sketch a t-shirt logo.
You see, the creativity one is immersed in at the ranch, so evident when you take a class there (or, I’m certain, is also the case if you’re one of the ranch’s fall or spring artists-in-residence), often extends to and immerses and vivifies the faculty as well.
It’s traditional that the instructors design their class’ logo, and that on the last day at the Magic Kingdom for Artists (my unofficial tag line for the ranch), those of their students who are so interested would have the logo squeegeed onto the front or back of whatever t-shirt they bring to class, be it ones they’ve brought from home and/or ones they’ve purchased from the ranch’s art store, with the ranch’s logo on the front.
It’s a neat, if at times demanding tradition, especially for ranch staff. I now have maybe five or more shirts emblazoned with such logos, slowly replacing the worn out yet just beginning to feel comfortable arsenal of black Marie Walsh Sharpe Art Foundation shirts so ubiquitous in photos of me over the previous half century.
Here’s the logo I made, which I ask the more graphically inclined of my readers, including my brother Gijo and Peter Horjus, not to judge too harshly; it’s not often my creative work extends into y’all’s territory: 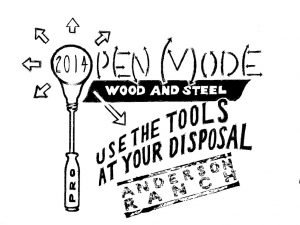 It’s a busy logo. I should have pared things down. Achille’s heel in oh, so many areas of my life.
The logo packs a particularly personally pertinent punch; makes reference to a number of ideas my partly physical, partly philosophical class engaged in for the week.
It refers to the following:
a) The class title: OPEN MODE – a subject unto itself.
b) The type of class – WOOD and STEEL. Couldn’t fit the word “PHILOSOPHY” in, though, as already mentioned, the class, like this blog, also figured plenty of that.
c) Speaking of philosophy, the class’ unofficial tag line, one of many I might have employed, as I had quite a number at my disposal, to use the tools at your disposal. Maybe I should write a blog post about that someday…
d) The year.
e) The setting, delivered via a faux “Anderson Ranch” stamp print in the lower right hand corner. It looks more authentic on my shirt than in the original graphic above.
And finally,
f) A “light driver” or “idea driver”, take your pick – the handy tool I created the first time I attended the ranch, back in 2008, as a student in David Kimball Anderson‘s and Tai Pomara’s two-week bronze casting class.
A cross between a screw driver and a lightbulb, it’s a tool that’s useful when one needs to shed some light on the subject, is feeling short on inspiration, or both. (In the latter case, should one pick up one of the bronzes I created in the class and, with it, smack themselves on the side of the head, they’d surely be inspired, at a minimum, to go lie down and, while seeing stars, allow their subconscious to get in on the action.)
Here, before I continue with my helpful logo key, are a few more light driver photos from ’08: 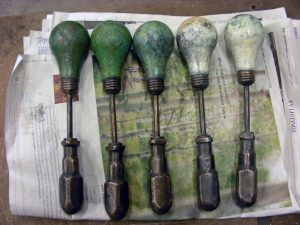 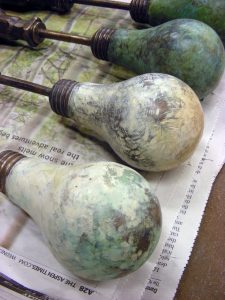 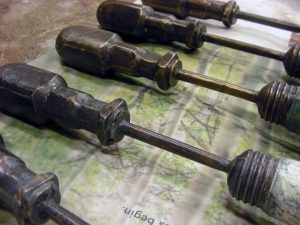 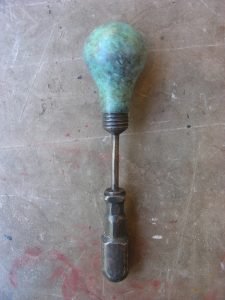 Another fun tradition at the Anderson Ranch is the lunchtime art auction at the end of the week, with proceeds going toward the ranch. Students and instructors alike are invited to submit work to the auction, and locals, ranch staff, students, and instructors are free to bid, often getting gorgeous work for pennies on the dollar. Of the six bronze light drivers I’d just created, I submitted one to the auction and it sold for $300 or so. Later on, the runner-up bidder tracked me down in the sculpture studio and bought two more, each for $200 – a nice, unexpected gift.
Back to the t-shirt logo key:
g) On the light driver’s handle is the word “pro”, for professional.
As in, professional artist. As in, my then new-found attitude, inspired during the drive up and over the Independence Pass on the way to that very class I taught, and shared with my students, so that they, too, if they hadn’t already, might take hold of the notion, that I am a professional artist (with the imperative following quickly at it’s heels that one first act like one).
h) And, finally, arrows.
Arrows pointing every which way. Embodying the idea of an organically open method of creative operation that, in an ever increasing manner, I try to embody, and talked with my students about. It encompasses more than simply the method of art creation but narrowing the focus to that, it stands in sharp contrast to the client-driven, commercial work I used to do, where the outcome, the end product, was nearly always pre-determined; set in stone and to a high degree, fairly closed to additional conceptual input.

Even with the more commissioned work I do these days, I like to retain as much creatively fluid control as possible.
____________

In a few hours, my wife and I, with our dog, Ruby, in the back seat, will literally be on the open road, driving to a familiar family destination to spend some highly anticipated, sorely needed downtime with family and friends. Happy Thanksgiving, everyone!
However, the state received a lot of snow, yesterday, and I’m sure the passes will make for interesting driving. Best to head south, through Pueblo, make a turn in Walsenburg, and head over La Veta Pass. Hopefully that’ll avoid most of the potentially problematic mountain passes.
The trip will soon be followed, in my next month alone, by four others to three other states, two trips of which are required for my one upcoming, Tulsa, OK-based public art project.
Which is the primary reason that I’ve chosen this light driver-centric post today.
Back to my three-dimensional light drivers, resting just feet from where I sit, and Ruby lies like a sack of potatoes, this morning. 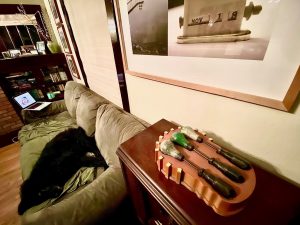 Being made of bronze, they’re heavy, in stark contrast to the message they seemed to be imparting to me, back when I made them in ’08, the first time in many years when I felt truly unshackled as a creative person, as well as today:
travel light.
Speaking again of travel and light, here’s an unedited, unfiltered photo that was taken today by my then 12 year old son, Nate, just days before I resigned from my job at the Colorado College to be a full time artist and travel to Italy for a month.
It shows the 1/4″ steel rod light driver I had bent by hand one night in the sculpture studio, that very first time I took a class at the ranch in ’08. Ever since, to this day, the piece has sat on top of the French doorway’s frame in between our living and dining rooms at home.
The light driver comes alive with fire at last!

I’ll close, at long last, by, at long last, revealing to you all what very few people know – that the light bulb motif figures prominently in my upcoming public art project. In fact, the piece may have you exclaiming,
Look, ma, no hands!