To and Past the Border 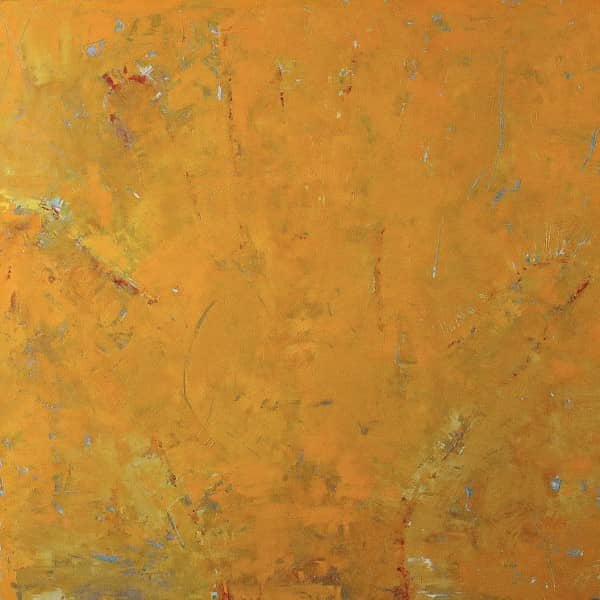 It’s November 1, 2022, and I returned, two days ago, from spending ten days in Tulsa, Oklahoma, where I was the artist-in-residence for ARTworks 2022, a.k.a. Arts Week, at the Holland Hall School. The gig was comprised of five days of working (alongside faculty, staff, and parental volunteers) with K – 12 students on art projects. It also included an exhibition of my work at the school’s Holliman Art Gallery in the Walker Arts Center, which will remain up through November 23. If you’re in the Tulsa area, stop by! 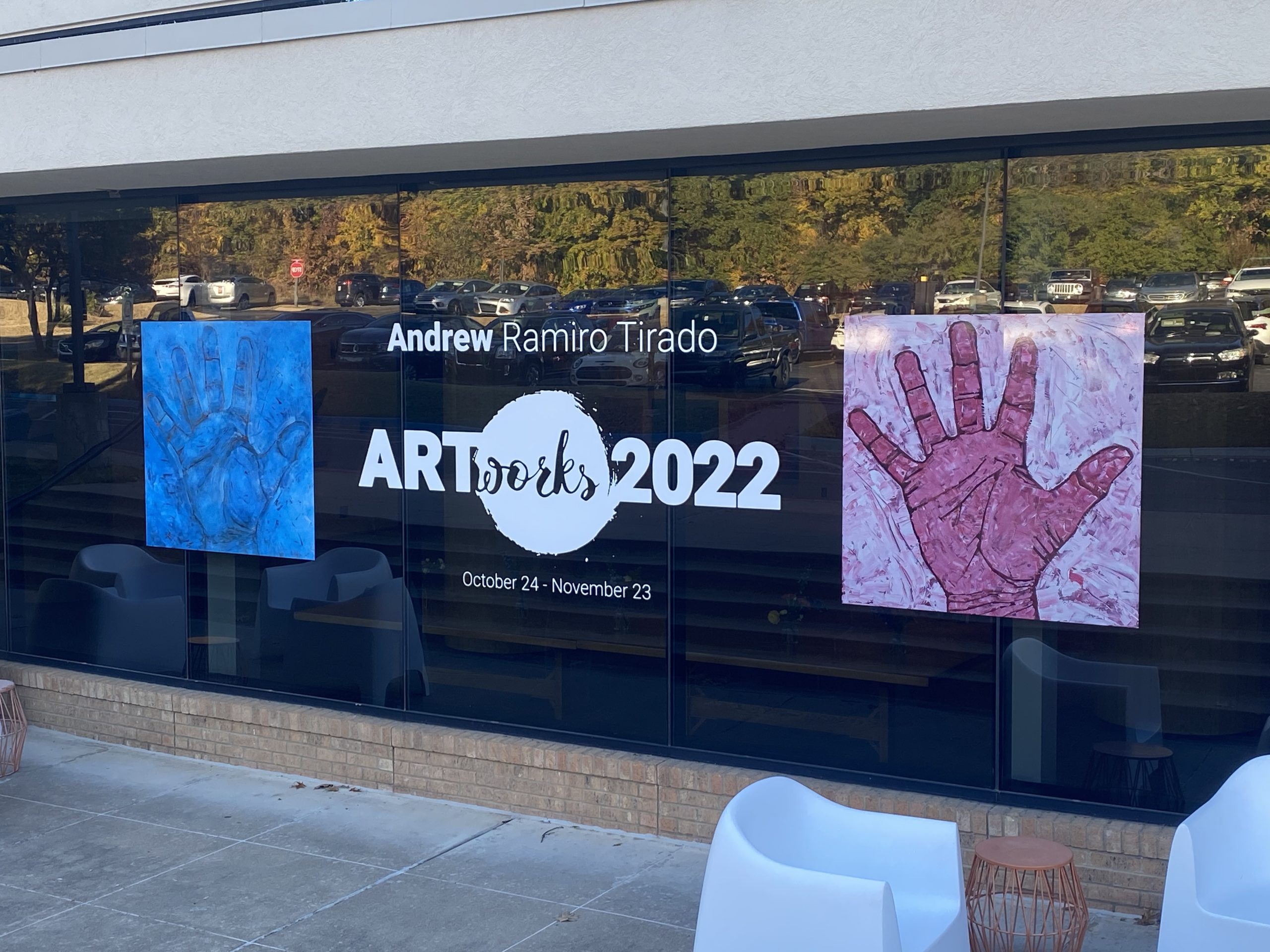 The primary focus of the week was working with the students, which I found enjoyable if, by the end of each school day, slightly exhausting. But it was refreshing to see not only how well behaved the students were at all ages, but how readily they dove into the art assignment, tailored to their different ages. They did amazing work, and I can’t commend the school enough for the entire experience. Well, except for sinking into mud during the installation, just outside the Walker Arts Center. I suppose I can’t blame anyone at the school for that, but I can thank Meredith Rogers, Holland Hall’s Community Events and Volunteer Coordinator, for disappearing for a while and returning with what appeared to be brand new, if wet, shoes. Thank you, Meredith! 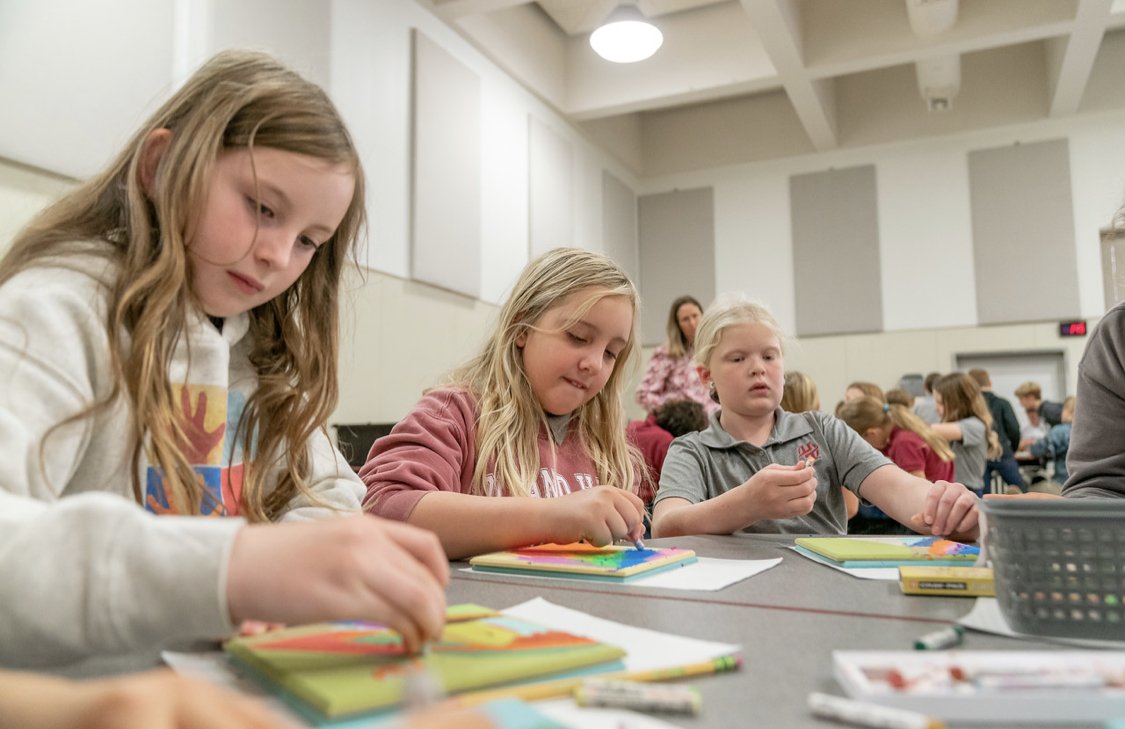 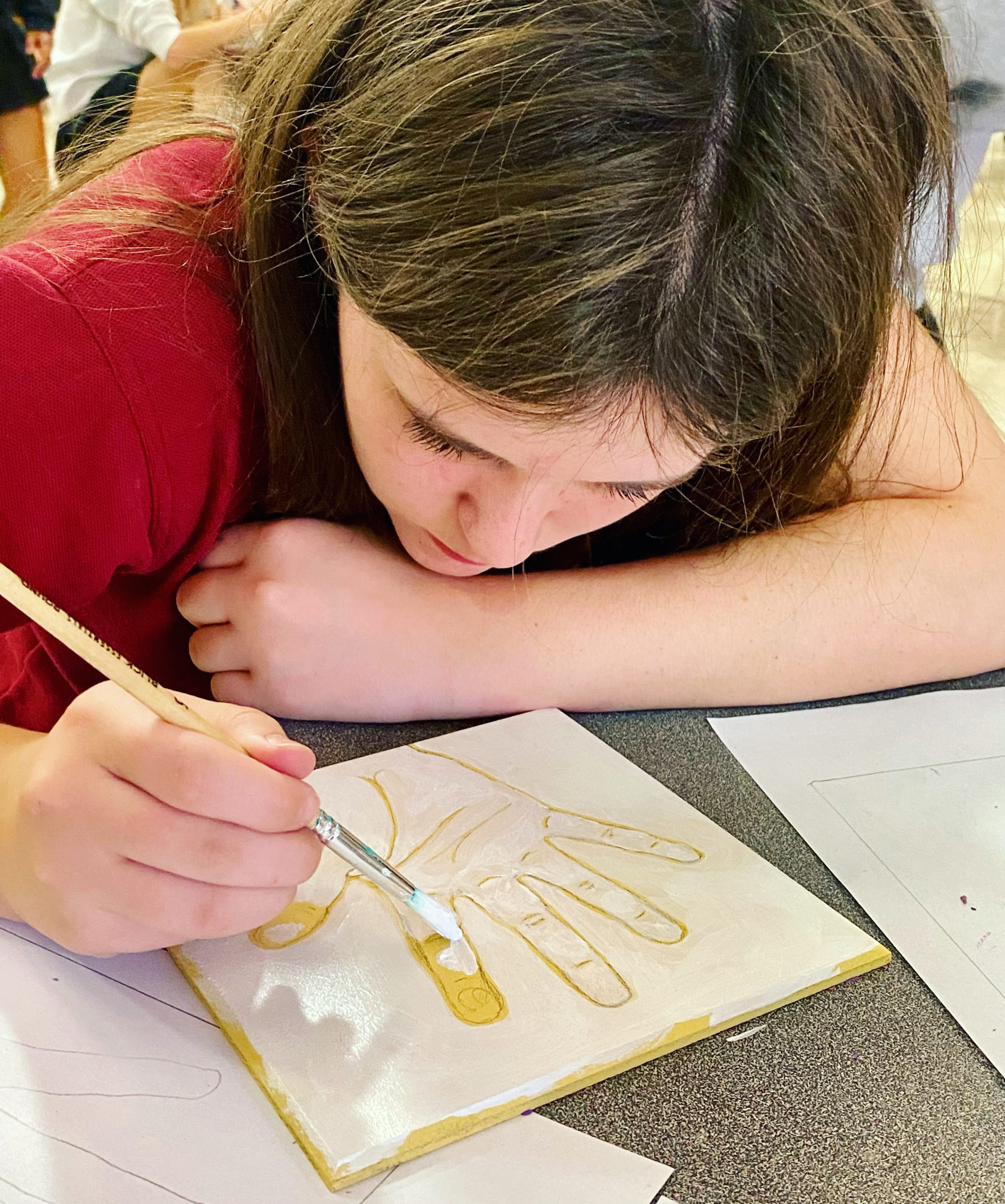 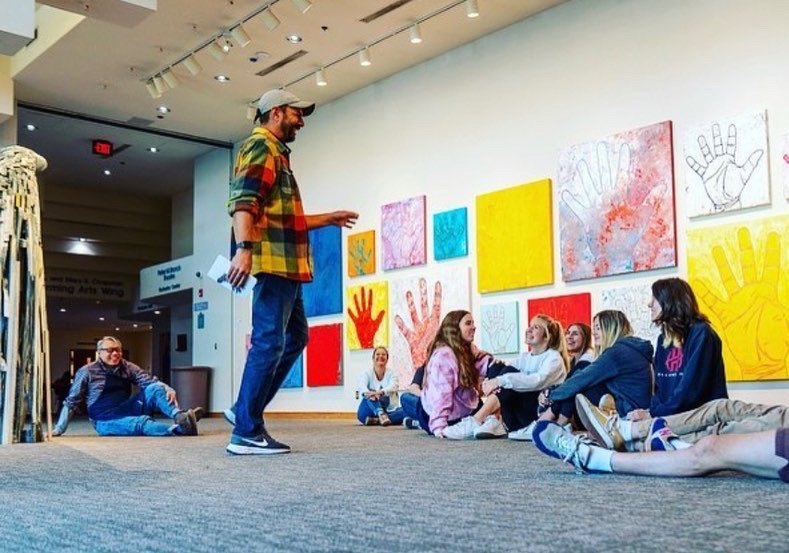 For my exhibit, which I titled [hands]full, I created around thirty oil paintings ranging from 5’ square down to 2’ square, plus an 8’ 2” reclaimed wood sculpture. I also pulled some of my older work out of storage and included it, primarily to show students a wider range of techniques and media.

Back when I was working on the show this past summer and into the fall, I had a few reasons, a few “ulterior motives”, for the direction in which I chose to head.

First, besides the one sculpture (“Further Up and Further In”, an 8’ 2” reclaimed wood, paint, and gold leaf piece), I chose to focus entirely on oil painting. While I have worked in oils before, I still considered myself more of an acrylics painter when I’m not, say, drawing, sculpting, creating public art, or stepping into mud, and wanted to get a good feel for oils; for its qualities and limitations. Again, kind of like the good feel I got of the mud, immediately soaking through my Nike shoes and socks. But I digress. Oils dry much slower than acrylics, like my shoes slowly dried after being cleaned, and I enjoyed being able to work back into the oils, mixing colors “wet on wet”, that is, directly on the painting surface, as opposed to only on the palette – sometimes two or more days after applying the initial coats.

My second goal was to attempt to paint on a smaller scale than I typically do, in part, in order to be able to finish work quickly. That is to say my larger work, primarily my sculpture, due largely to the amount of surface area to cover and, specific to my sculpture (and public art), the multiple processes the work goes through can take months or even, in the case of public art, years to complete, and I have had an interest in being able to produce work from time to time that isn’t labored over like that – to produce the visual equivalent of, say, a blog post, while (continuing the analogy) keeping up the practice of writing short stories and the occasional novel.

My second motive is more of a two parter, because I’m hoping that by producing some work quicker, I’ll soon be able to approach some galleries in various parts of the country to see if they would have an interest in it. I could see being associated with perhaps a half dozen galleries in different regions exhibit my work. Possibly more. Hard to do that when you only crank out a few pieces every year. The lack of traction kind of precludes such a possibility, like, well, my tracks stopped, mere feet from the front of the art center, when I muddied my shoes.

The third and perhaps most shocking ulterior motive was to branch out into nonobjective, or abstract, work. While not retiring the motif of the human hand, I have felt for a long time that abstraction was an arena I wanted not only to enter, but to really explore.

Will that confuse people? Perhaps. But perhaps not. And it can be good to keep people on their toes. Plenty of artists have made similar jumps between abstraction and representation, and vise versa. Diebenkorn. Tunson. Guston. In contrast to Guston, I don’t intend to make a wholesale break from one thing to another. Like Floyd Tunson, I may traverse back and forth across the “border” at will. After all, I do have the artistic license to be able to do so.

I first made a run for the border early in August. After I felt I’d completed the requisite number of new pieces for my show at Holland Hall, I attempted a piece that moved quite a ways from pure representation. I’d say it fairly bridged representation and abstraction, and am pleased with the result, which I titled “Open Variation (Borderlands)”. The primarily yellow, seemingly sun baked 4’ x 4’ panel (pictured in the cover of this post) is currently displayed on the Holliman Gallery’s long wall, again, through November 23, 2022, along with all the rest of the “Open Variation” pieces, but of them all, it’s the one that, well, I think if you saw the grouping you’d say, as an astute 3rd grader in effect did, that “one of these things is not like the other”. To me, the piece is a bit like the twin cities of El Paso, Texas and Juarez, Mexico. It sits squarely (literally so!) on the border, beyond which lies the hitherto rarely personally explored world of pure abstraction. The intense yellow colors of the piece recall in my mind the desert southwest, and Cormac McCarthy, the writer’s, primary motif. Hence a second layer of meaning for the parenthetical portion of the piece’s title. The title’s also a reminder, to me – a kind of personal historical marker – of the piece’s importance in my development as an artist applying for, as it were, dual citizenship. It was a jumping off point.

After completing Open Variation (Borderlands), I continued my travels in the new world of abstraction, completing a few purely abstract oil on panel pieces, and included them in the exhibition. Here are some of them: 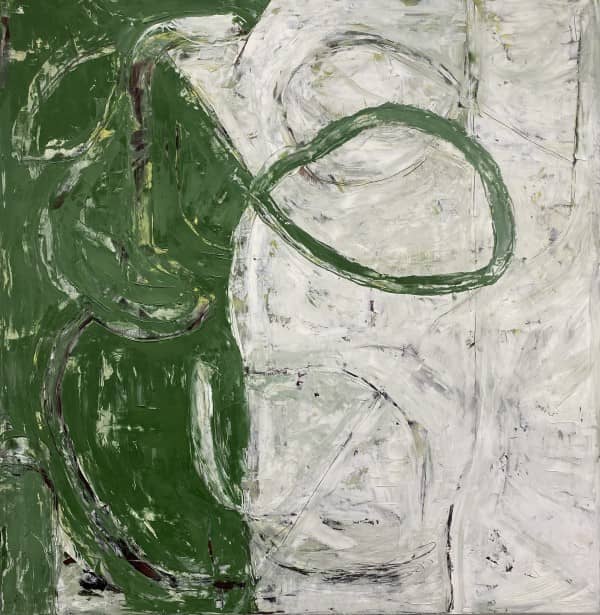 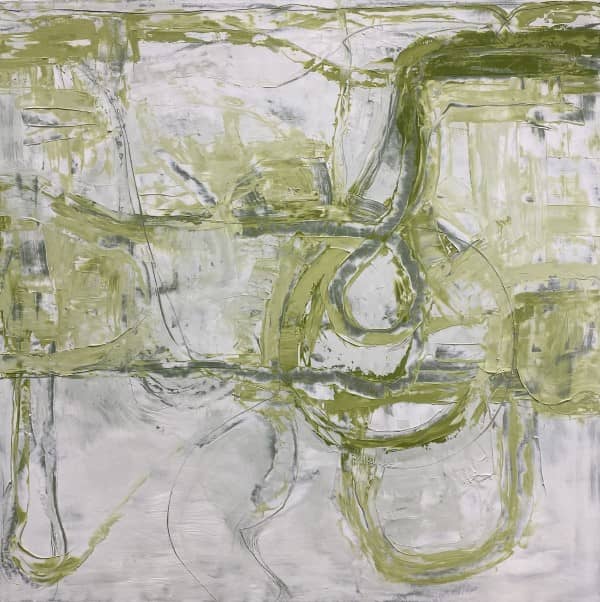 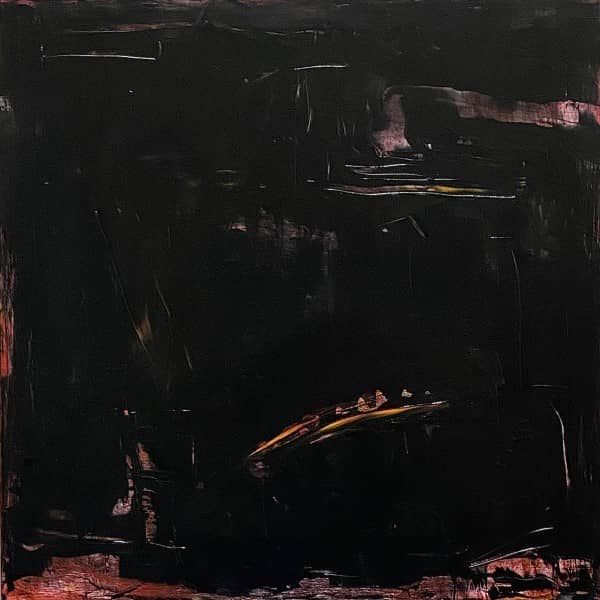 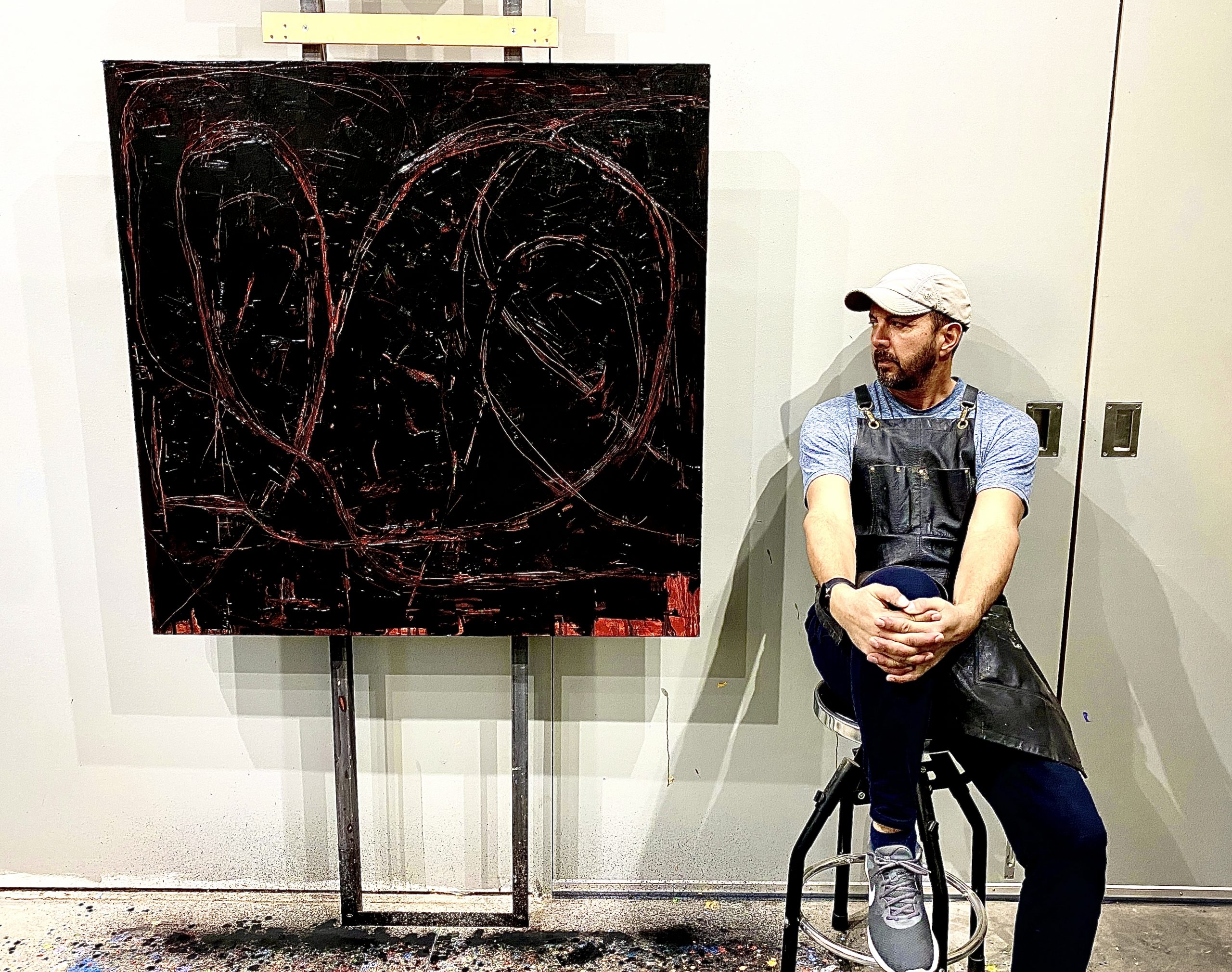 So that’s where I find myself today, and, methinks, for the foreseeable future, artistically. I’m excited to see where the direction takes my work, and feel like I am developing the requisite tools – the needed supplies, shall I say – to make said exploration into the vast unknown. New studio – check. A number of primed panels sitting in storage, awaiting the brush – check. Clean, dry shoes – check.

From the initial foray into this new world, I’ve found, perhaps unsurprisingly, that it’s not all that unfamiliar. It’s like when one travels to a far away country and realizes that while the language and customs and maybe the side of the road they drive on might be fascinatingly different, their cars still run on gas. Or petrol, anyway. Because ultimately, I’m doing much the same things as I have with my representational work. There are some differences, for sure. Perhaps chiefly, not working from some subject matter; not continually checking my progress against a fixed object for accuracy, as it were, feels a bit like getting to the top of a staircase in a dark, unfamiliar house and assuming there’s another step to go. Your foot falls through empty space and it comes to you in a flash: I may not fully comprehend the lay of the land, but it’s clear that I’m already here.

Another thought that occurs to me is that this new land is being created in the moment. It’s not like visiting Italy and walking among centuries-old ruins. And yet… ghosts of many others seem to lurk at every turn. Twombley. Diebenkorn. Silly to list them all, they’re seemingly at every turn… and yet, this vocabulary’s different. It’s a brand new language, one that’s morphing like English does. One that surprises and at times delights – whoa – I didn’t know such phrases could exist.

So I don’t want to assume anything. I want to be open to the possibility that I will continue to be surprised by the unexpected, as one frequently is when traveling to a new country, say. Or when their feet sink deeply into Oklahoma.