Today’s post is the fourth in a series that began here.

In the two months just preceding February 3, 2012, I’d been rebuilding some sculptures of one of my favorite college professors and longtime Chair of the Art Department at the University of Colorado at Colorado Springs, Louis Cicotello, who had died in a tragic canyoneering accident in March of 2011. Millie Yawn, Louis’ recently widowed wife, had asked me if I’d be willing to assist with the project in the fall of 2011, and I was honored to do so, rummaging with her through hopelessly jumbled piles of sculptural work in his studio, peering at slides to discover how the sometimes disparate components were supposed to be oriented, driving a pickup bed full of parts to the college sculpture shop I supervised and, evenings and weekends, epoxying, gluing, screwing, rebuilding, and reconnecting components that were, at times, chipped, broken, or otherwise in need of t.l.c. Once rebuilt, I’d drive each sculpture to the art gallery at UCCS and stage it in the storage room in advance of a retrospective of Louis’ work slated for early 2012. Then, I’d steer back to the Cicotello home to pick up the pieces of my next project. 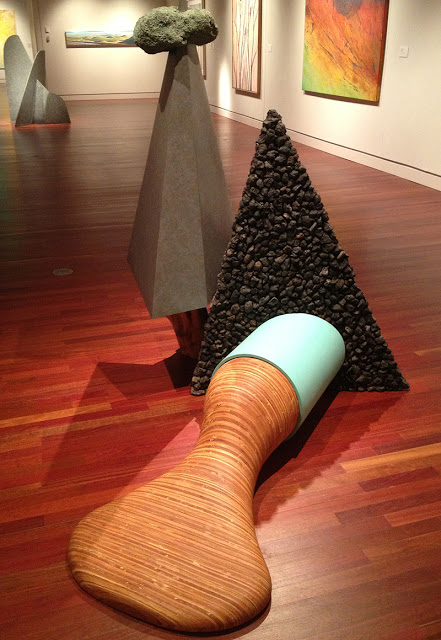 When one does such altruistic things, very often there’s a payback in ways that money can’t buy. One of the things that I now believe occurred during those weeks of rebuilding Louis’ art was the confidence I gained from being trusted with the meaningful project, a confidence which grew with each completed sculpture. These were some of Louis’ most ambitious pieces of art I was putting back together, and it was as if the weeks-long project of making the neglected and damaged pieces whole again mirrored something similar in me – reclaiming territory in my mind I’d abandoned long ago. To participate in such a reclamation process helped prepare me for the fork in the road I was approaching in my creative journey, though I wasn’t aware of it.

Subtly yet significantly a few times during that period, and exactly at moments when I’d be alone in the shop, rebuilding one of Louis’ pieces, a feeling would wash over me. Hard to explain. Had it been a voice, it would’ve said something like, “Just you wait. Something’s coming. Something good.”

I had no idea what to do with the benign, pleasurable feeling. I didn’t try to process it. All I knew was that it felt good, like sliding into a warm bath.

I don’t recall when it was, perhaps Christmas vacation?, but Millie and I drove a couple states over to Kansas City, Missouri in Louis’ pickup, rented a trailer, and brought a few more of his pieces back to UCCS for the approaching exhibition. Louis and Millie had lived in Kansas City prior to moving to Colorado in the ’80’s, and it was nice to meet a few of their longtime friends/collectors of Louis’ work, and especially to spend some quality time with Millie – usually, back in the day, I’d only have spoken with her at openings or briefly just before or after one of the mountain climbs Louis and I used to do together.

Thanks to the generosity of the Colorado College’s Art Department for the use of the shop and Millie’s trust that I’d be able to put the at times Humpty Dumpty-like broken pieces back together again, by the middle of January, I’d finished rebuilding and touching up at least a half dozen large sculptures, staged along with dozens of pieces the gallery had received from collectors of Louis’ work in the back room. I never felt rushed, finishing in plenty of time before the opening of the exhibition on January 3rd.

That was the very day I awoke up before four am, as I had for days on end to continue working on the “Voluminous Vittles” project in the same shop where I’d rebuilt the broken pieces of Louis’ sculptures. Same day I bumped the coffee mug. More broken pieces, but these ones, unlike the precious pieces of Louis’ work, weren’t worth trying to put back together. A coffee mug’s a coffee mug.

There was nothing special about it, other than its red, oval logo. The logo of the Strand Bookstore, the place that had become personally emblematic of the moment I abandoned any thoughts of having an art career a long time ago.