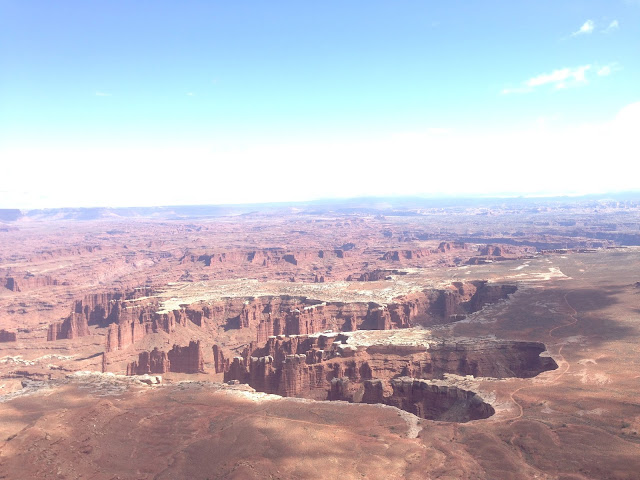 Recently, we spent some time camping near Moab, Utah. I’d been there a few times prior, mid summer, to raft on the Colorado River, but had never been into Arches or Canyonlands, two stunningly gorgeous national parks nearby. This time, we saw both, and I’m wearing the t-shirt to prove it this morning. (I bought it because I needed some new t-shirts, and it has a graphic of a type of conifer indigenous to the desert southwest which may be figuring highly in my art in the near future, the Juniper).

When one descends toward Utah through Colorado’s higher, conifer-covered mountains on I-70, following the westward flowing Colorado River, with the incremental altitude declination comes a similarly gradual change in scenery, so that by the time you pass by Grand Junction on our state’s Western Slope, the towering walls of rock you’ve been passing through for miles aren’t pointed and tree-blanketed anymore. Here, and through Colorado’s two neighbors to the west, the tops of the surrounding outcroppings are flatter. In time, the mountains which were so prominent have completely faded away behind you, if they were actually real. It now seems we were right: the entire world is universally flat after all. Flat as a pancake. Especially in summer, when you step out of your air conditioned vehicle, that’s how it feels – like you’re on one vast, steaming pancake, still on the griddle, it’s horizontality only unbroken by more perspicuous flatness: with flat topped buttes, mesas, and plateaus, separated, at times, by miles of rock- and sage-punctuated flatness.

When it’s said of someone that they’ve plateaued, it usually means they’ve stopped growing; stopped progressing. They’ve hit a barrier, they’ve hit a wall, hit the breaks, they’re about to hit the skids. The assumption often is that their forward momentum has ceased and the next direction in which they’ll be headed is reverse, back the way they came. They’re headed back down, unless we’re talking about the weight loss arena – then it’s assumed the numbers on the scale will be creeping back up.

Jogging is supposed to be good for that, and it was while doing so recently that I was mulling plateaus, specifically wondering why my pace, as measured on my running app, hadn’t progressed at all in recent weeks. I’ve plateaued in that department. Kind of frustrating. But then I recalled how my mom, many years ago when she was a regular morning jogger, talked about what she’d noticed about her physical progress in that arena. She said she’d often plateau for weeks at a time, and then, one day, for no apparent reason, she’d be able to run farther and/or faster than ever before. Then, she’d plateau again for weeks, before measurable progress would again occur…

Permit some introspection. When I look back over my creative life-span, like looking out at the vast network of canyons below from atop the appropriately named Island in the Sky mesa in Canyonlands National Park, where today’s photo was taken a couple of weeks ago, I can clearly denote layer after layer of “plateaus”. Periods of time where, if there was any progress at all, it seemed, in the moment, measurable only in geologic time. Perhaps I could see the next plateau ahead of me, but as when you’re in the labyrinth-like network of canyons, it can be hard to know how get there, or if I ever would.

But perhaps it’s like my mom’s jogging. That period of time where you begin to wonder if your upward progress has permanently ceased, that you’ve plateaued, might just be an acclimation period. A time where you’re first needing to fully “embody” the altitude you’re at, a prerequisite before you can reach the next stage.

The years before I entered school were a plateau – I recall crying when my older brother left for Kindergarten, but not why. Did I want to head into the unknown as well, or, more likely, did I want him to stay at home; for things to remain the way they’d been?

The years I was in school felt like a long plateau. Can I get an amen?

The seven years I was primarily a house-husband felt like a plateau.

The seven subsequent years I was a custom props builder felt like a plateau.

The ten years I worked at a college felt like a plateau. A period when the things I’d learned in all the previous stages came in handy, but that new things needed to be learned as well.

The final four years of that period, when I began creating art again, in my spare time, felt like another plateau. A building on all that came before.

Starting to write my (original) blog in 2013 – another plateau, and an unexpected one.

Creating art full time for the past year feels like the latest plateau. The latest layer.

I highly recommend that you stand were I did recently, on the appropriately named Grand View Point Overlook. Good for perspective. Good to realize the magnificence of God’s creation as well as the smallness of you. It was good to spend a few days disconnected from wifi at the edge of the slowly flowing, silt-laden Colorado. To sit in the dark with loved ones, watching the campfire’s sparks ascend and affix themselves onto a close ceiling of stars.

It’s nice to realize that sometimes, when you’ve plateaued, it could just be a period of acclimation. Plateauing might be a better life metaphor, even, than mountain climbing, with its (again, in the moment) seemingly unrelenting uphill trudge. (But I still prefer climbing in the lush, green mountains of Colorado).

Perhaps life’s more like a series of plateaus. Of Photoshop layers. A series of stages during which time our job is to break in our current pair of shoes, before tying on a pair with better tread for the next uphill climb.