So… I’ve been getting up early to create art in the studio for the past three weeks or so. 2 – 3 am has been pretty typical, but occasionally it’s even earlier. The other night, I left home just as a couple of my older kids and one of their friends were starting an episode of An Idiot Abroad at 11 pm. I chuckled and thought An Idiot Starts His Day The Night Prior.

The ease at which I’m awakening in the small hours would be surprising when contrasted with the prior four months or so – after I finished work for my last show in October, anyway – were it not for the fact that, idiotic or not, I’ve always been this way. I’m a bit like a Labrador Retriever – like Kea, our black Lab of ten years we had to put down last week – who, when nothing much was happening at home, would most often be found lazily snoozing away the day, but when on the lead, became alert, animated, even a bit manic. Stop pulling, Kea! There’s no need! We’ll get there at my pace, not yours! You don’t even know where we’re going!
Even before I had a day job which relegates my personal creative time to the portion of the day outside of 9 am – 5 pm, there would be periods of time when I would wake early like this. They nearly all happened to coincide with time-based creative projects.
I think even further back, back to the time when Tom Sanny was building sets for his side gig – his main one was teaching film at the Colorado College – when he’d do something similar. He would leave his home well before the sun or we, his part time employees, arrived on the scene, and sit down at his gum drop iMac, or at his drafting table, to work out the day’s tasks for us. By the time we showed up, he had a neatly written, easily understood sheet typed and printed out to explain the step by step instructions for the work day. I was always amazed at his discipline. Little did I know that, assuming he was wired anything like me, it took little discipline to leave the comforts of a warm bed well before dawn.
These days, I’m in the driver’s seat (editor’s note: hardly) but I’m convinced that even during my sleeping hours, times like these (and whether or not I can recall any of my dreams), the gears in my head are turning – working on the next step or two or ten of the project like the ever-organized, always ten steps ahead Tom Sanny. Who knows? Maybe while I assume it’s my sketches done in the studio or my prototypes built in the shop that are driving the project forward, deep down the final form of the project is already fully sketched out, deep within the folds of my brain, or folded perhaps more like a scroll, with just enough of each day’s “tasks” slowly unfolded and spread out on the drafting table of my conscious mind that can be comprehended, if clumsily.
Like it or not, I’m wired this way: project-dependent. I’m convinced that there’s a little switch inside my brain somewhere that flips on as soon as a project is presented. Only this time, the switch kinda sorta birthed the project – a finger on the switch did, anyway. It started the flow of just enough adrenaline to wake me much earlier than I’d typically rise, and no doubt will continue to do so, day after day, until the project has been completed. And then, just as mysteriously, it will switch off. Heaven help me if I ever take on an art project of a duration, say, like one of Christo’s – one that takes years, sometimes decades to see to its ultimate fruition. Christo must take a lot of power naps. I wonder if he drinks kombucha?
For me, it’s not the kombucha or the coffee, or starter fluid, as I sometimes call it; I drink the same amount of starter fluid whether or not I’m operating in this mode. When there’s no time-dependent project at hand, it wouldn’t matter if I drank a large mug full right at bed time. I’d still sleep like a baby. I’d still have difficulty getting up before 7 am.
I’m searching for a good way of describing the two very different modes of energy here… What if, to borrow some terminology, I call them open mode and closed mode? I’m borrowing from John Cleese of all people, who has talked about how to create the optimal conditions for creativity. Google it for the whole excellent talk, but here are a few excerpts:

“We all operate in two contrasting modes, which might be called open and closed.
The open mode is more relaxed, more receptive, more exploratory, more democratic, more playful, and more humorous.
The closed mode is the tighter, more rigid, more hierarchical, more tunnel-visioned.
Most people, unfortunately, spend most of their time in the closed mode. Not that the closed mode cannot be helpful.
If you are leaping a ravine, the moment of takeoff is a bad time for considering alternative strategies.
When you charge the enemy machine-gun post, don’t waste energy trying to see the funny side of it. Do it in the “closed” mode.
But the moment the action is over, try to return to the “open” mode – to open your mind again to all the feedback from our action that enables us to tell whether the action has been successful, or whether further action is needed to improve on what we have done.
In other words, we must return to the open mode, because in that mode we are at the most aware, most receptive, most creative, and therefore at our most intelligent.”
As I said, Cleese talks about how to create the optimal conditions in order to be creative; to “return to the open mode”, but for me, all his pointers, while useful, are frankly inferior to the natural excitement that occurs, time and again, when a creative project appears.
There’s simply nothing like entering into an interesting project to get the creative juices flowing.
The first time I took a class at the Anderson Ranch in Snowmass, Colorado, and each time I’ve been back, I experienced the same thing – I’d awaken well before my roommate, sneak quietly out of the room and down the hall to the communal computer, and write my wife, Nan, about all the exciting things that had happened the day before. Then I’d go for an early morning hike up one of the nearby ski slopes, snowless in summer and devoid of any other people, return to the “ranch” for a bit of breakfast, and then it was studio time, with breaks for lunch and dinner, usually well after class and most others had retired – 11 pm, midnight. Then, back awake at 3 or 4 am the next day… that’s another one of the reasons I’m calling my upcoming summer class there Open Mode. For me, and a lot of other people who attend the Anderson Ranch, that’s exactly what is experienced internally. It’s truly the Magic Kingdom for Artists (my unofficial title they’ve yet to adopt).
Speaking of Disneyland, just after high school, a few friends and I took a road trip to California for a week, and I recall starting out at David’s house at around midnight, piling into his dad’s pickup with the camper on the back, and heading west. Switching off driving through the night. Winding through the Colorado mountains. Narrowly avoiding hitting a giant bird of prey – pretty sure it was an eagle – that flapped off the road ahead of us, winging into the star-filled blackness. Stopping at the border of Utah at sunrise for an outdoor breakfast of cereal. Taking goofy photos – pretty sure it was my idea that we stand behind all those ridiculous photo opportunity signs that inform tourists that this would be a great place for a photo, so that no matter what was happening out of the frame, like the magnificent Grand Canyon, all the snapshots were of the five of us, grinning, pointing at the signs?
Right now all signs are pointing to the fact that I should start winding this down and resume my own enterprise. This morning when I awoke at around 3:30 my initial thought was to head to the studio, but then I remembered what was about to happen, and decided instead to come downstairs to write this, but more importantly to await a kind of turning of the guard: today we’ve switched roles and it’s a couple of my kids who are leaving home in the small hours before dear old dad, sitting at the dining table in his flannel pj’s. Sophie and Will, along with their friends Bethany, Lexi, Josh, and Kellan, are, as I write, shuttling backpacks and a cooler and bags of snacks out to the car to begin their road trip to California for Spring Break. Kellan and I just had a brief exchange bordering this topic and he said waking today at 4 am was totally different from waking the day before at 6 am for work. Way easier. It’s only natural.
He’s in open road mode. No doubt they all are.
Thank you, little switch.
Safe travels, kids. Don’t forget, it’s better to plow into the deer (or the eagle, endangered or not) rather than swerving violently when on the highway. 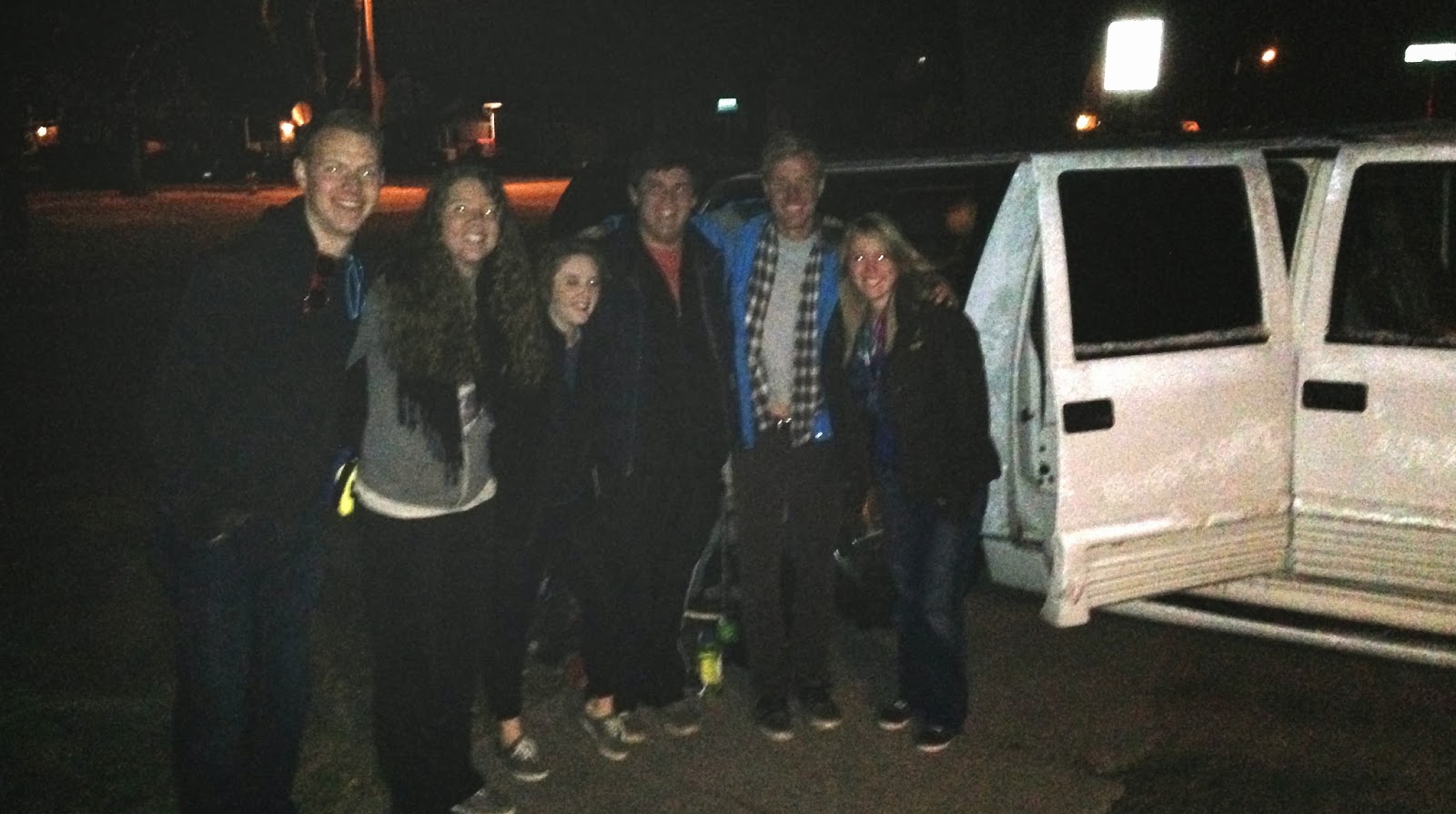