On Elevating a Grateful Intonation 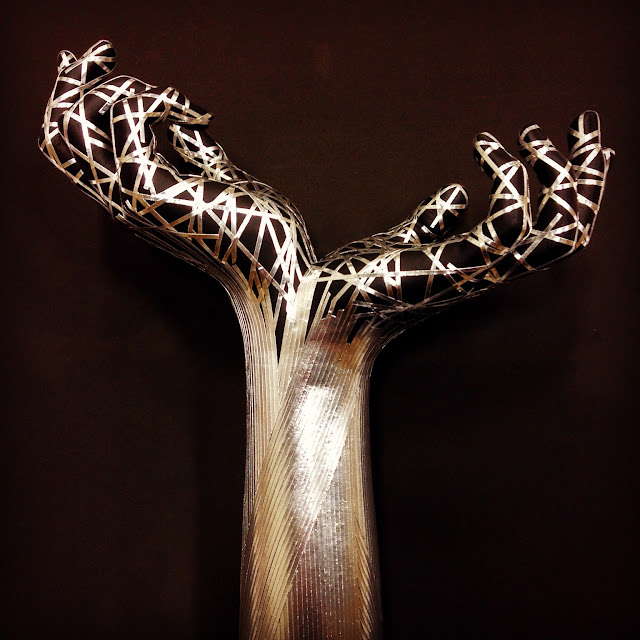 One afternoon a few days ago I called my wife from the studio, where I was creating art, and told her I love her. Unfortunately, it’s a very rare occurrence, my doing so. A scarcity I need to change.

I went on to thank her for making it easy for me to work on art. For me, if things were difficult at home, I’d have a hard time enjoying creating things in the studio. For me, peace at home creates the environment that allows me to create; disharmony stops the flow.

It’s rare that I feel unable to work on art.

The next day, again in the studio and again feeling grateful, I texted or emailed all my kids and told them the same thing. And again, that’s not like me. It’s untypical, but I’m hoping to disprove what they say about old dogs. And really, it doesn’t take much effort.
It takes a village, it’s been said, to raise a child. For my immediate family and our five children, it’s taken both my wife and me to keep all the plates spinning, with the assistance of some very good friends and family members. So many people, but a few key ones – it doesn’t take a large village.

I think I’m thinking about this because of the time of year. More than that, the time of century. You see, we’re approaching, my wife and I, our 25th anniversary; our marriage will pass that milestone on the 29th of this month.

Last month we finally bit the bullet and mailed off nearly forty Super 8 tapes containing nearly every moving picture reference to that history in three separate boxes to have them converted to DVD’s. Very scary to trust that gold mine to the vagaries of a postal service and a company whose employees surely haven’t 1/1000th of our regard for their value. We were very relieved to get the precious cargo back about a week ago, unharmed, along with their digitized copies, an exorbitant present which we opened on Christmas Eve and began to watch as a family.

It had been years since any of us had viewed them, and watching our family go from two to three on up to seven, not including our four legged, now deceased family members of Jasper, Pai, and Kea; as well as Steve, also gone, who lived with us for a few years; the extended family; friends; the toys the kids used to play with; the hairstyles and glasses thankfully gone (except for the amount of hair, in my case); the music; the vehicles we used to have; the skits we’d perform at holidays – watching that history on screen has evoked many emotions running the gamut. Just last night, Nan and her friend Kathy needed tissues as they watched younger versions of our thick-as-thieves kids – the Tiwortleys, is it, or the Worados? – with their higher pitched voices and smaller frames, goofing off for the camera, getting kissed by Papa.

Mainly, my emotion has been gratefulness. Gratefulness for the blessings of such a wife, for the kids, for the family and friends and animals and experiences. For twenty five years of watching infants grow to the point where our youngest, at 12 years of age currently, is just now surpassing his mom’s 5’7″ height, easily on his way to surpassing his dad’s 6’2″ and, we all think, even his brother Will’s 6’5″. High pitched wails to deep throated laughter in the blink, it seems, of a blurry eye.

This morning I awoke just before 2 am to hear our oldest two night owls, one of whom will soon be moving out, possibly for good, talking downstairs; the door at the foot of the stairs leading to the master bedroom must’ve been left open.

I couldn’t hear what they were saying, just the tones. But as in art where what one says needn’t be as overtly spelled out as in an Ed Rucha painting, much can be communicated via tones alone, and I enjoyed, not for the first time, the happy inflections punctuated often with laughter between our two eldest. They communicated peace. Love. Harmony. Goodwill. The sounds all parents love hearing between siblings.

I think about some of the digitized memories:

There was that tape of the Easter morning egg hunt in our living and dining rooms. How old would Will have been – four? Five? Sophie, four years older, had just mildly, offhandedly stated she’d not found any eggs yet. The camera caught Will – then Willy – as he found yet another egg on the mantle and then unselfishly, totally oblivious to the camera, gave it to her. “Here, Sophie, you can have this one” he said, putting the egg in her basket before turning to look for more.

Round headed, bright eyed Peter, delightedly clapping his hands in his high chair and the rest of the room responding with applause. When he stopped, we stopped. When he started back up again, so did the rest of us.

Sophie, as a two year old pre-reader, sitting on the couch pretending, in her cute voice, to be reading that children’s book aloud. Or just a year or two later, responding to her dad’s request to read out loud. She begins with a labored sounding out of each word, then after a sentence or so, laughs and says, “just kidding”, and begins to read the book easily and fluently, as effortlessly as the unrehearsed humor she displayed.

Too many good memories to recount.

My wife just read me something recently about the two brothers who founded and continue to run the company that makes the clothes and other paraphernalia that proclaims “Life is Good”.

From time to time, I’ve thought about buying a cap or a t-shirt with that credo emblazoned on it from our local outdoor equipment store or second hand clothing store, only to reject the notion. Despite agreeing with the simple statement, it felt boastful. With all the problems in the world, both in the macro view and in the world of our immediate friends and family, it felt like an emotion I best keep close to the vest, as devoid of braggadocio as it would’ve been.

But in the article, as conveyed by my wife, the brothers, along with their four other siblings growing up in a lower-middle class family in Boston, didn’t always experience a life of wine and roses. Their parents were in a near-death car accident that broke their mom’s bones and caused their father to permanently lose the use of one of his hands. His resulting flashes of temper caused their middle school years to be difficult, but in the midst of it all, their mother continued to believe life is good, and, at the dinner table each night, asked her six kids to talk about something good that happened that day. Focusing on the positive helped eliminate the negative, and the lesson the brothers learned was that being happy isn’t dependent on your circumstances; that, according to one of them, “optimism is a courageous choice you can make every day, especially in the face of adversity.”

They credit their mom for creating what is now a 100 million dollar company spreading their tagline that “Life is not perfect. Life is not easy. Life is good.”

One of the things they mention about their mom was how she’d sing in the kitchen.

That got me thinking about going ahead and buying one of their caps or bumper stickers, but also about the mom of our children, and how I can gauge her emotional state by the presence of absence of spontaneous singing as she goes about her work in the home.

There’s not much formal singing in the Tirado household, but a lot of happiness resounds within the walls of our 1920’s bungalow via extemporaneous viva-voce. And without: our older three kids, who all work for the same employer, are known by co-workers for their uncompelled, cheerful, near constant melodies, just like their grandfather on their dad’s side was known for whistling while he worked. One of our kids, now 22, recently said he knows from whom that mannerism was learned.

There are, even after 25 years, some things my wife and I have yet to learn about each other, it seems. It was only yesterday that I revealed to Nan that I’ll use her singing as a kind of yardstick. (That and her thumbs, which she’ll gnaw the skin off of when she’s stressed despite all my attempts to shame the habit from her like I am now, but she’s well aware of that emotional “thumbometer”). I love hearing her sing while she’s downstairs folding the clothes or what not – it tells me that despite a laundry list of pain in the world – pain she can feel at a depth and acuteness I can’t fathom – she’s well; that at her core, she’s at peace. Life is good.

At home, I don’t think I’m nearly as similarly vocal as she or the kids are. But in the studio, early in the morning when no one else is within earshot, I will often play my music loud enough that my hearty belting along with the lead singer from some 70’s band sounds halfway decent in my own ears.

Even there, I don’t sing out loud all that often. I’ll do it when I’m really feeling it – feeling something very much akin to what Eric Liddell felt when he ran.

So yeah, I’m feeling it, and running those DVD’s containing just a few of the memories of our first quarter century, I’d have to say life wasn’t always either perfect or easy, but life was good.

Looking forward, life, I know, won’t always be either “perfect” or easy, but, I hope to remind myself, life is good.