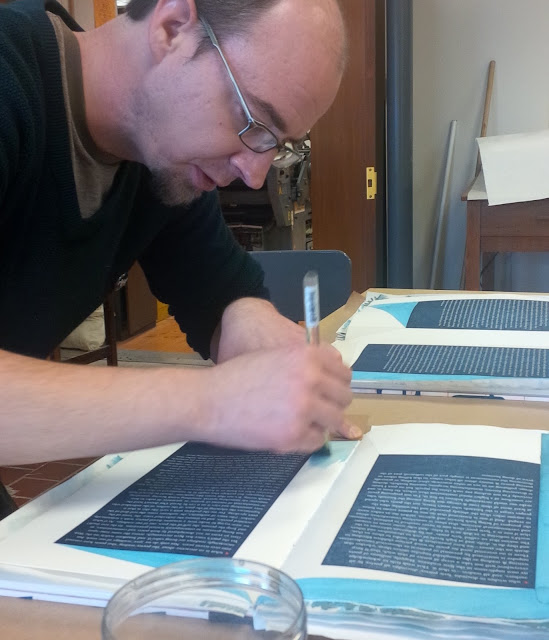 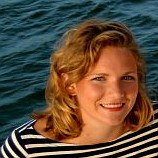 Even when one interacts with them every day, instructors at the Colorado College can remain, at times, inscrutable.

Yes, we students sometimes catch glimpses of what makes them tick through the material they teach, but it’s an absolute treat when one finds a teacher who pulls the veil back from their specialized field of interest. I think back to courses I took in Italy, and how adept my art history professors were in conveying their excitement in the things they taught us. Perhaps it had something to do with their ability to interact directly with the subject of their study. 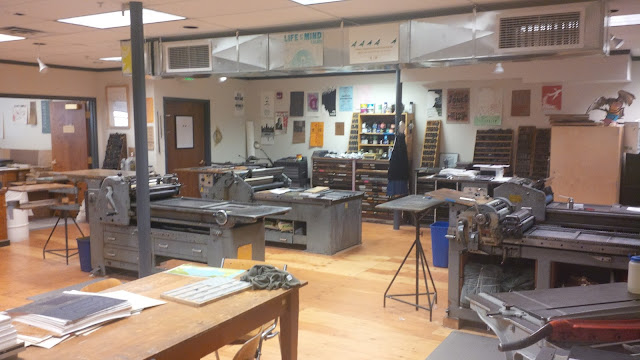 I’m currently taking a class from Printer of the Press Aaron Cohick, who similarly exhibits a strong dedication to and absorption in his craft. As an example of his preoccupation with the particulars of his vocation, on the first day of class, in between subtle entreaties for meticulous cleanliness, he confessed to being “way too ‘into’ fluorescent inks.” 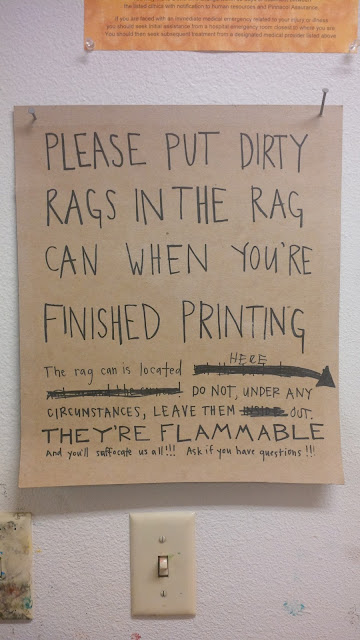 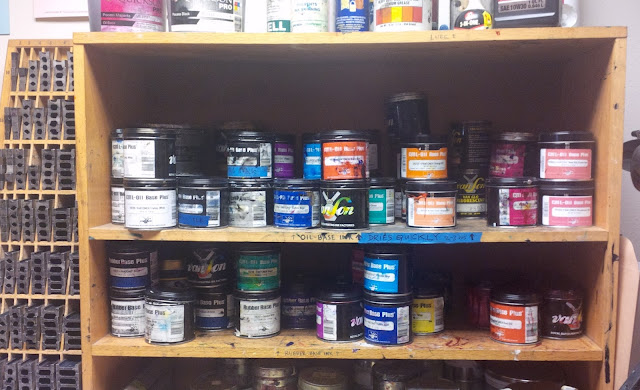 In such offhanded comments made to students, one catches glimpses of Cohick’s zeal for the work he does, but it wasn’t until I spoke with him about one book in particular that I truly began to grasp his enthusiasm and expertise for his profession. 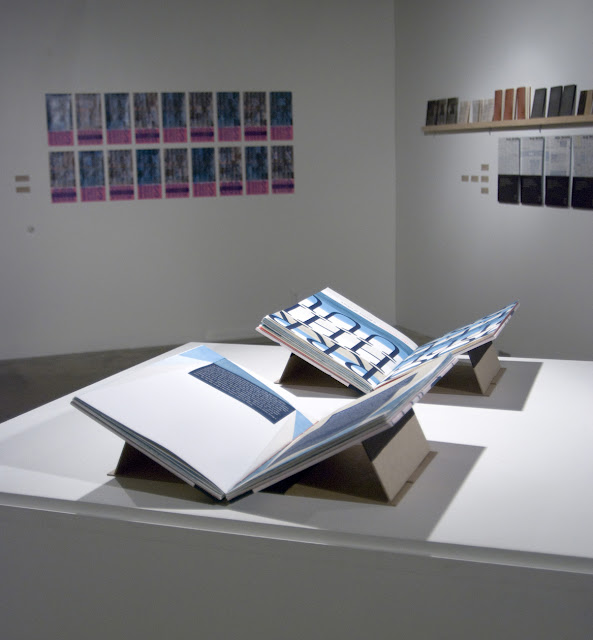 Photo credit: Heather Oelklaus
Orpheus the stutterer, by Alan Loney, designed and printed by Cohick, and assembled with the help of his undergraduate assistants, is the latest book The Press at Colorado College has produced, and the first in three years. Each book in the edition of 40 is decorated with geometrically patterned fluorescent oranges and shades of blues and tans. Hand painted and lacking a formal spine, each copy reveals a delicately-laced string that binds the pages together. 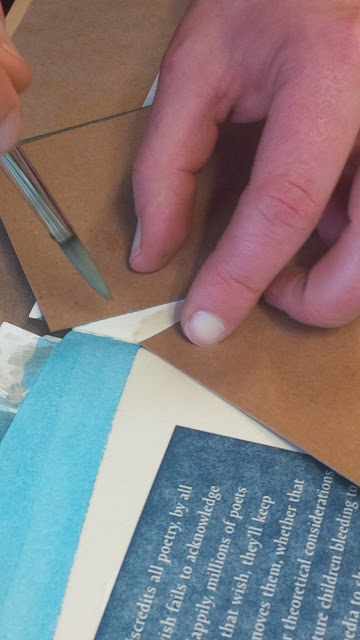 I was interested in finding out what influences Aaron had for the book’s design. He provided much insight into his artistic choices. 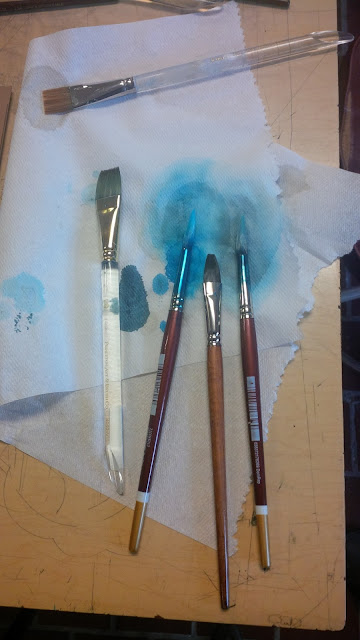 “I have always seen that tradition of page design as being directly related to another major interest of mine – modernist and minimal-conceptual painting. Piet Mondrian is also one of Alan Loney’s “big” painters, and the text of Orpheus references Mondrian directly.” 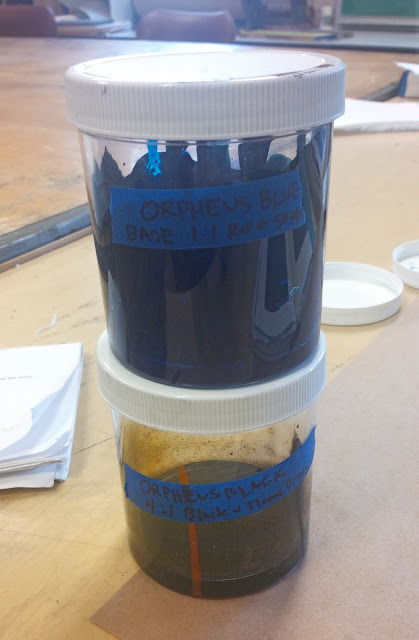 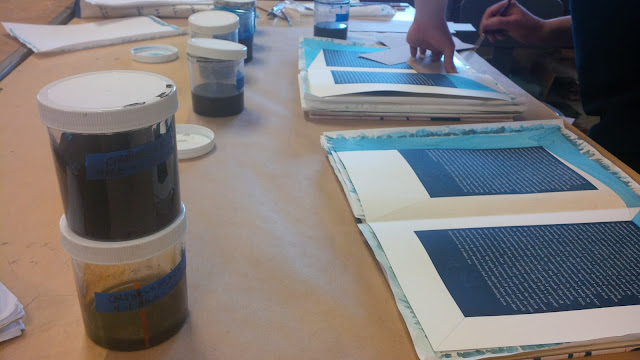 “One aspect of non-objective, modernist painting that I find continually intriguing is the insistence on the two-dimensionality of the surface of the canvas and the suppression of illusionistic space.”

Photo Credit: Heather Oelklaus
“The painting becomes a real 2D/3D object in space. I tried to get the pages of Orpheus to do something similar.” 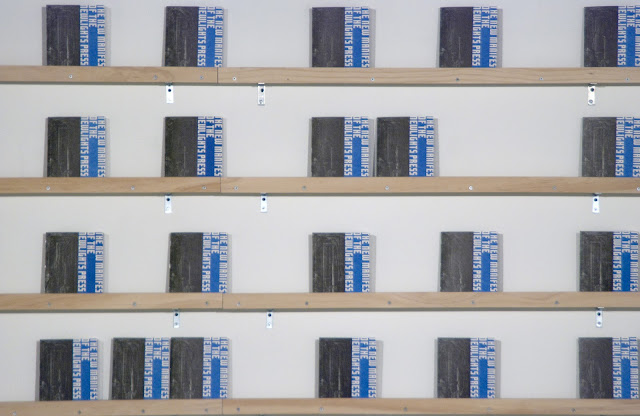 Photo Credit: Heather Oelklaus
When asked how he chooses which texts to work with, Aaron responded,
“I choose work that I can interact with in some way. I am not interested in simply making a good-looking book or broadside. I want to be able to get a hold of the text, test it out, see what it’s made of, and put it into a new form that seems inseparable from the ‘original’ text.” 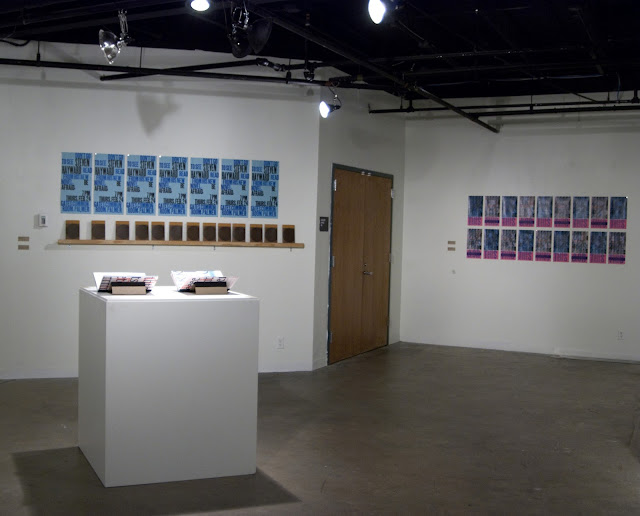 With the first few of the time-consuming copies completed, Aaron and his assistants recently took Orpheus the stutterer to the CODEX International Book Fair 2013 in Berkeley, California, one of the largest book fairs in the world, and sold two of them. Now, that may not sound like much to the common book consumer, but the impressive part of The Press at Colorado College sale are the buyers – Mills College and the British Library now have Orpheus the stutterer in their collections. 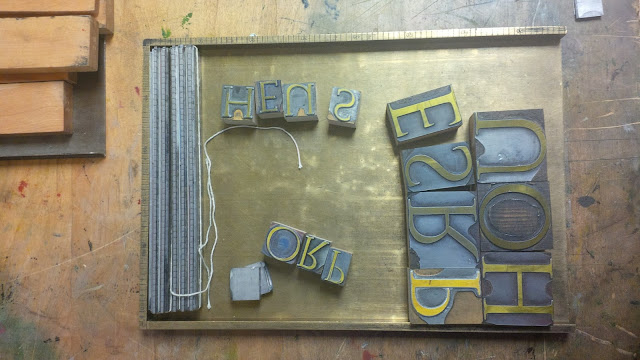 Aaron’s infectious excitement for his profession, as he took the time to explain his work, his influences and inspirations, has been my first delightful introduction to the world of Book Arts. When, as a student, one finds a teacher so engaged in their work, it is an unexpected, and frankly rare, pleasure. Orpheus the stutterer and a good deal more of Cohick’s work is being displayed, free and open to the public, in I.D.E.A. at Colorado College’s exhibition Any thing that Is strang (pronounced strange) in the Coburn Gallery in Worner Center at the Colorado College until April 16th. Despite the mutually strang title of my post, I hope I’ve been able to provide a glimpse into why it’s not so strange, really, that I’ve been so taken with the realm of the press. If you have an opportunity to check out the show, I highly encourage you to take a further peek into Aaron’s creative world. 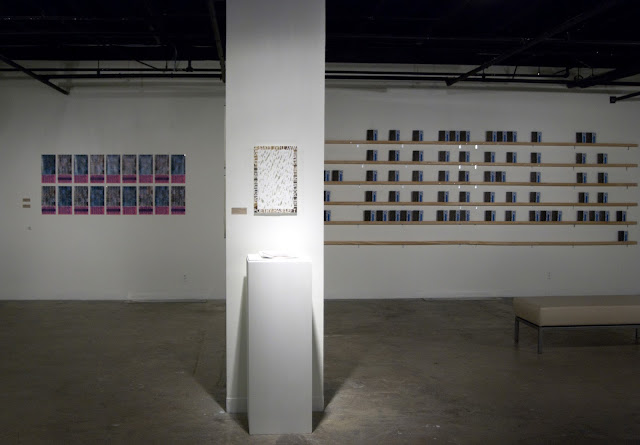