Over the past few posts, starting with Consider Yourself Kicked, I’ve been training my Art Regard thoughts on the subject of effort. Persistent, at times painful effort is often required to accomplish something substantial in life.

However, especially after titling yesterday’s post, Be Indefatigable, closing the laptop lid, and heading off to face the rest of my day – there was still plenty left at 4:30 am – I felt like I ought to address some caveats. Because everyone, even Mohammed Ali, pictured pummeling another boxer in yesterday’s post, eventually fatigues. Everyone has a breaking point. None of us can compete with the coming wave of AI machines that, able to work 24/7 without rest, will supplant many of our jobs in the coming decade.

Even James Alfred Wight, better known by his pseudonym James Herriot, Yorkshire country vet and bestselling author, whose attempts to get his writing published went nowhere for a good, long time, eventually threw in the towel. He gave up.

The overarching reason I find his story of the purgatorial struggle he faced during the three years he tried to get his work published is because it puts the lie to the thought that genius or talent alone are enough. Or even that talent and hard work are enough. Or that talent, hard work, and persistence are enough.

Here’s a phrase that just popped into my mind – one that I wish we could eradicate from the language: self-made man. (I was about to add “or woman”, but truly, I can’t think of a time I’ve heard a woman use the troubling-to-me term.)

Did any of you out there birth yourself, cut off and tie your own umbilical cord, change your own diapers, etc., etc.?

When you think about how beholden we are to those who have come before and provided us with every modern convenience we now take for granted (as I sit here, forming sentences on a MacBook Pro, wearing clean clothes, sitting on a functional chair on a stable floor, and on and on, as well as our neighbors who help provide the power that keeps the ceiling light on, and the streets safe, etc., etc. – no, how foolish to use the term “self made”.

The part of James Herriot’s story where, after enduring rejection letter after rejection letter for many months on end, he concluded, “Well that proves it. I can’t write.” – that’s the part that’s particularly poignant to me. In the interview, the next words out of his mouth are that his wife convinces him to give it another go. To send his manuscript in to yet another publisher.

But in real time, I imagine his manuscript was stuck in a drawer for weeks, if not months. It’s times like that when one’s doubts have the upper hand, times we have thrown in the towel, that I felt needed addressing today. “Be indefatigable” is, perhaps, too simplistic. It echoes “self made”, “I did it my way”, “master of my ship”. It doesn’t allow for the times we fail, or the times when we aren’t seeing any progress.

In fact, things may have to get worse to get better.

Question: Is it ever possible to reach your goal if you’re visibly, literally moving away from it?

On the last full (non-travel) day of a recent vacation I took with my wife, Nan, our son Nate, daughter Sophie, and her husband, Erik, after Nan and I had taken our typical early morning, easy tandem kayak paddle to the end of the Mayne Island, BC, bay and back to our Airbnb, we were all sitting on the deck and enjoying what would surely be yet another relaxing day when I got an eleventh hour, harebrained notion that, with yet another beautiful, sunny day ahead of us, Erik and I ought to circumnavigate the island, in a counter-clockwise direction, in the tandem kayak.

Sophie replied that Erik had proposed that the two of them give that a try the day prior, but they decided against it.

I looked at a map of the island and did a very rough calculation that it would take around four hours of continuous paddling to circle it once. Erik thought it would take two hours.

We started at the lower righthand corner of Mayne, in Dinner Bay (below Village Bay), and circled Mayne Island counter-clockwise. Note Active Pass, between Galiano and Mayne Islands, which is well named. Active water, and lots of ferries.

Turns out, we were both wrong – it took five, thanks to headwinds and fighting a nasty counter-current from start to finish.

We were perhaps three hours into our excursion by the time we rounded the Georgina Point Heritage Park and Lighthouse and began to aim our craft up the fairly thin channel of Swartz Bay, a.k.a. Active Pass, between Mayne and Galiano, the island to Mayne’s northwest. We could see clouds building to the west, directly ahead of us, and, as we had been, we kept close to shore to minimize the wind, waves, but especially the current which, to our regret, was (still) moving against us, only now, it seemed like a swiftly flowing river, one increasingly intent on expelling us out, past Georgina Point, into the Strait of Georgia. Coming in sight of Miner’s Bay, I checked the map again and realized that if we were to cut across the open water of Active Pass, hug Galiano’s shoreline, then back across the bay to Mayne, in effect making a beeline to the end of Mayne’s western-most tip, we would avoid Miner’s Bay’s long shoreline and, at least on paper, reduce the distance we’d need to travel by half or more.

I knew we’d be fighting the visibly more angry current in the middle of the bay, but, as I was seated in back, I kept our little craft (which, provided by our Airbnb host, was outfitted with a rudder but a broken foot pedal on the starboard side, rendering the rudder inoperable) aimed at a small, unmanned lighthouse on Galiano at an angle that kept us, relative to the Galiano shoreline, neither gaining ground nor losing it, though its tree-lined shore loomed increasingly, yet achingly slowly, as we vigorously yet sluggishly paddled, closer.

At last we made it, and after an all-too short break from the heaviest current while hugging Galiano’s shoreline and rounding Matthew’s Point, I gritted my teeth and again aimed the kayak back across Active Pass to Mayne Island.

Only, this time, the bay was so narrow and the current so consequently swift that even as I pointed the kayak at an angle that allowed us to cross the bay while hopefully at least not losing ground relative to the shore, to our dismay, as we made our way across the windy, choppy water, I noted with consternation that the point on the far shore I was aiming at was, in fact, getting further from us. Yes, we were crossing the bay, but the “river” was pushing us back, back, if it were allowed to, past Miner’s Bay, past Georgina Point, and out into the open waters of the Strait of Georgia. It was pushing us back faster than we could counter it.

Now, the person sitting in the back of a tandem kayak is the one who steers, and consequently ought to have the most experience. I’ve put a decent number of hours into kayaking with my wife, as well as in the wood strip canoe I built, back in the day, but I’m no means an expert. The person in front is the pace-setter, and as he had from the start, Erik kept up an unflagging pace, dipping his double-bladed paddle into the water in a strong, continuous rhythm. At that point, we both were: had either of us taken a break, I’ve no doubt I’d be writing this today from Vancouver or some such, but finally, as we approached Mayne’s shore line, our “regress” slowed, stopped, and, despite still contending with a counter-current, if a slightly relaxed one, we once again began to inch forward – and not a moment too soon, as a ferry rounded the corner of Active Pass, announcing itself with a long, low horn.

So yeah, as counterintuitive as it seems, I was given a very visceral and literal lesson that day while circling Mayne Island – today’s Mayne lesson: that we would only be able to reach our objective after losing ground. In a very literal sense, if we were to get around the island, there was no getting around it – we had to lose ground to the powerful current in order to eventually gain it.

Here’s another recent example more relevant to achieving one’s artistic goals: Earlier this summer, I was selected as one of three semi-finalists for a public art commission. Unfortunately, no remuneration was provided, and so I had to shell out income (draining the bank, when the goal is quite the opposite) with no guarantee that my proposal would be selected. At one point, my wife and I had a conversation as to whether or not I should spend a decent amount of money to employ a 3D animator. My argument, which eventually won the day (and consequently, the commission) was the following:

If I don’t cross every t and dot every i, and my proposal isn’t selected, I’ll always wonder if it was because I didn’t hire the animator. And that would be worse, to me, than paying for his services and losing the commission.

Sometimes, in life, something that looks like – no, is – a setback can be the threshold for the answer you’ve been yearning to hear; the goal you’ve desired to achieve.

I’ll end today by alluding to what I’d like to focus on next – the fact that James Herriot needed someone like his wife to partner with him; to encourage him, even to lovingly goad him (knowing, as she did after two decades of marriage just how to push the right combination of levers to spur him into action rather than load him down with shame and regret), not unlike Erik needed my ability to steer and I needed his pace-setting.

None of us are truly ever self-made. And our own talent, hard work, and persistence, critical as those qualities are, are often yet not enough.

Sometimes, yes, it takes a village. Or perhaps, just perhaps, one well-timed word of encouragement.

Like, “Hey, Andy, I encourage you to learn something about ocean currents before you try anything like that again.”

I’ll end today’s post with a few bonus pics provided by Sophie and Erik, who, along with their friend Ricky, are currently trekking across the Dolomites of northern Italy. Some people! 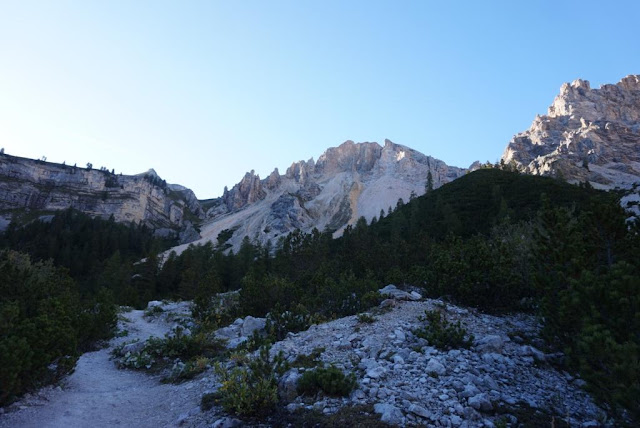 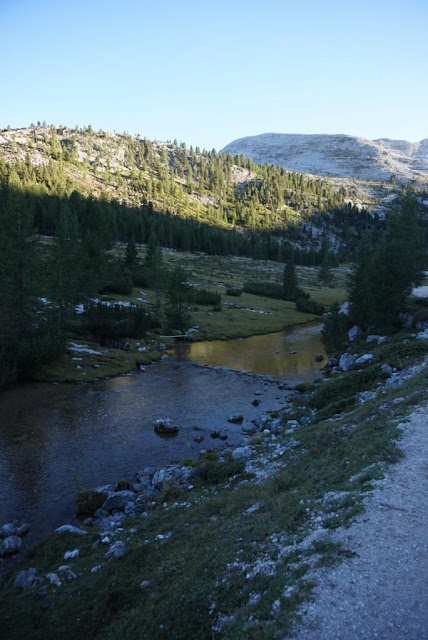 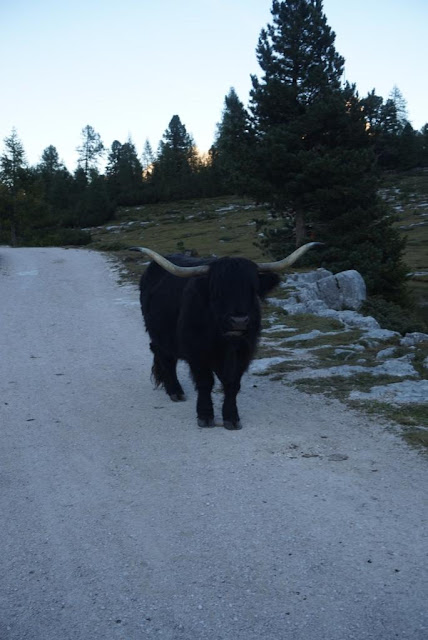 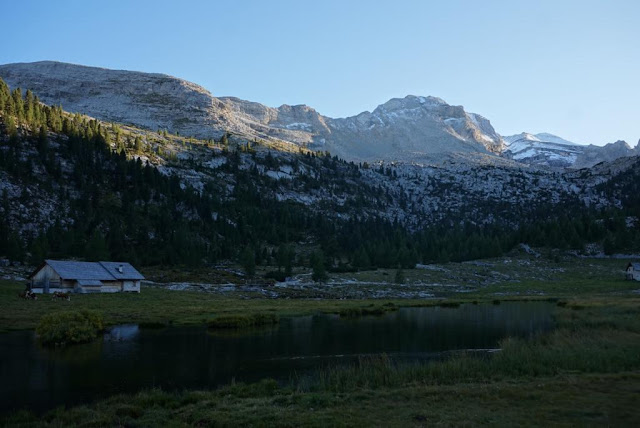 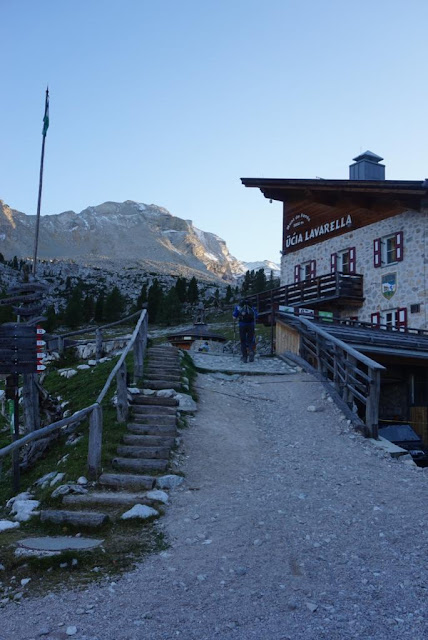 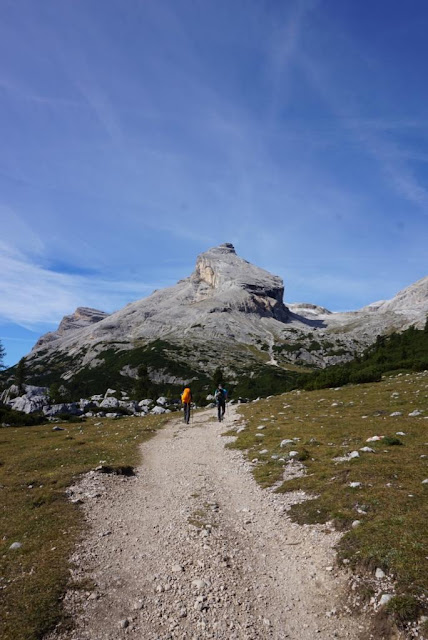 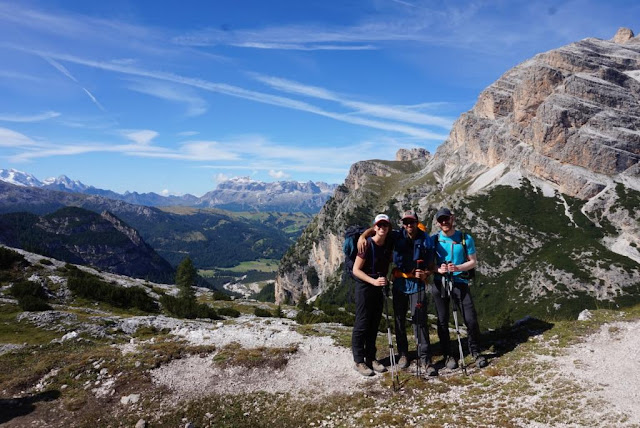 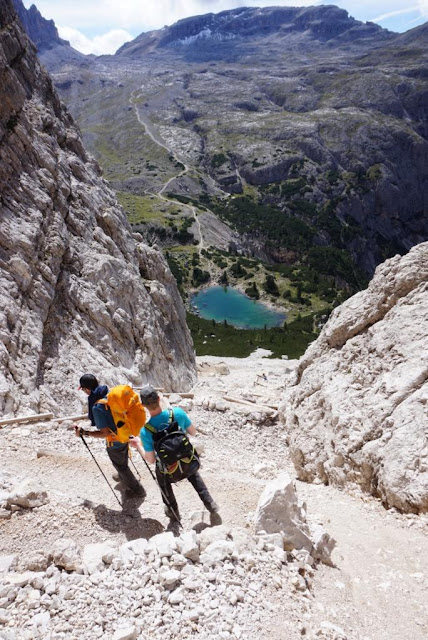 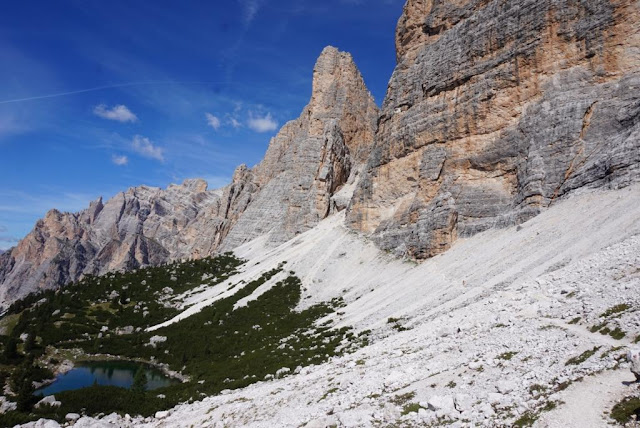 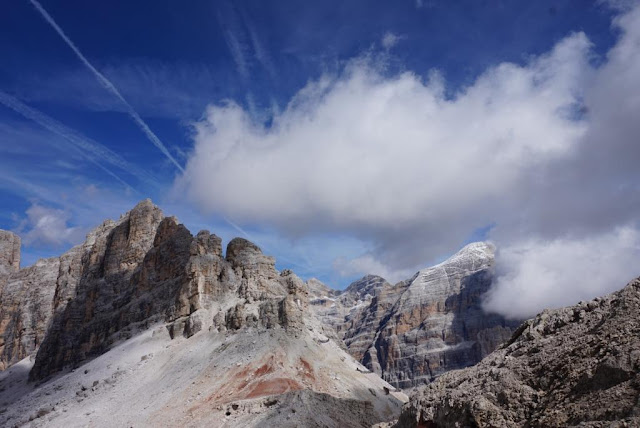 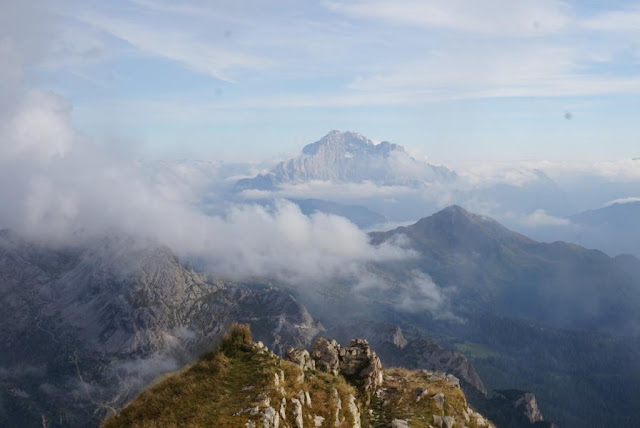 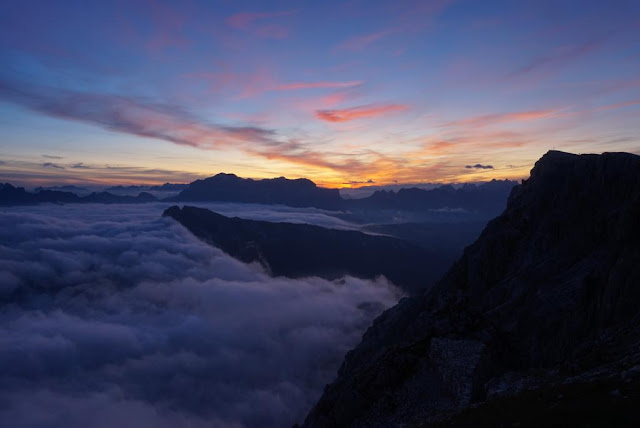 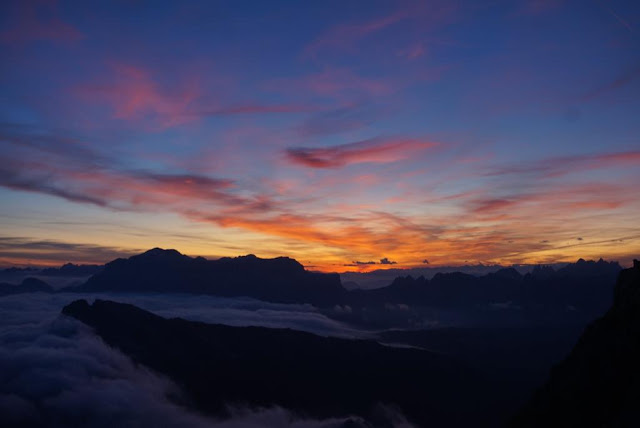 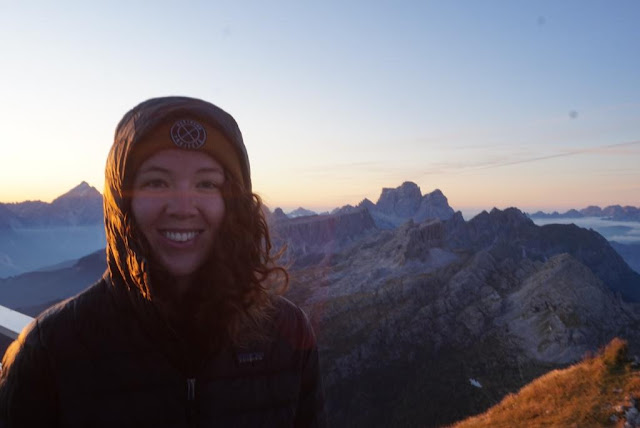