Looking Back, Looking Down, Going Back and Forth

In yesterday’s studio build-centric post, I said that later that day, framer Joe Soulka and his crew would be flying in the trusses for the new workspace. Here are some of the photos I took of the day, which went super smooth – no mishaps, and near-perfect weather. It was an auspicious day long before the man, the legend himself, Floyd Tunson, along with my wife, showed up later in the afternoon; icing on the cake. 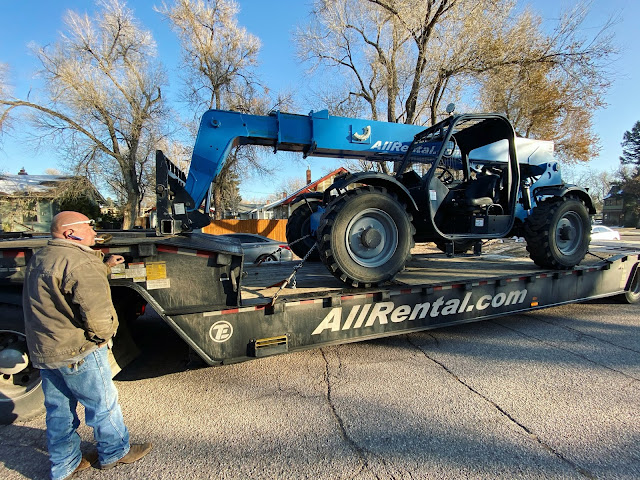 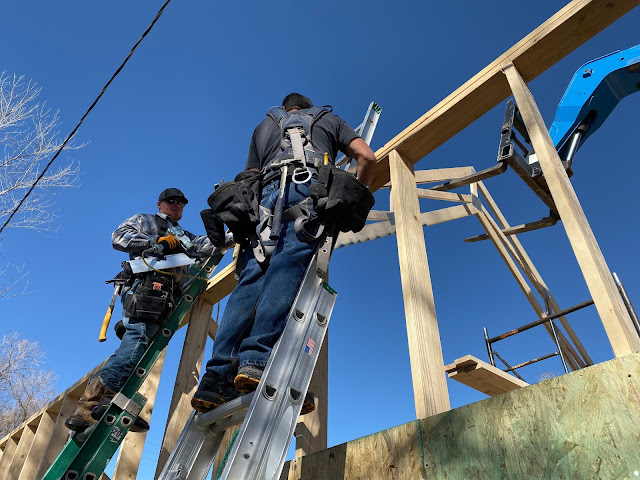 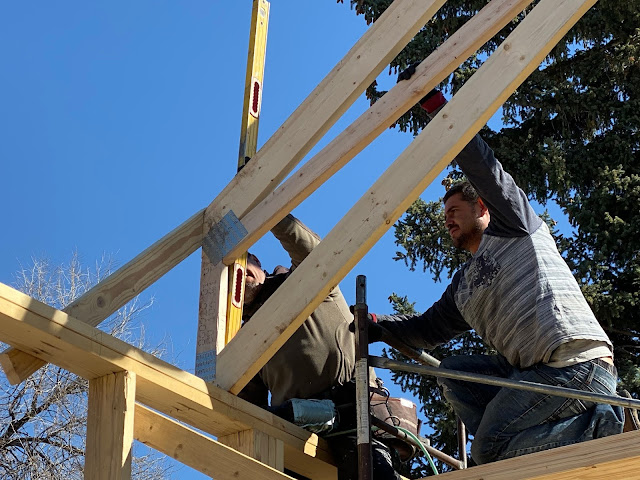 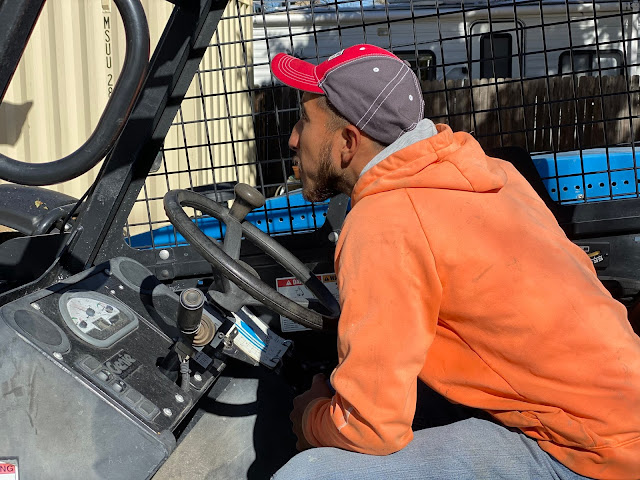 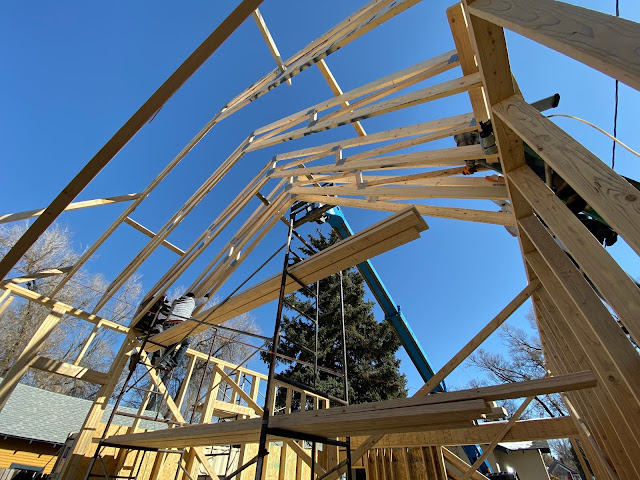 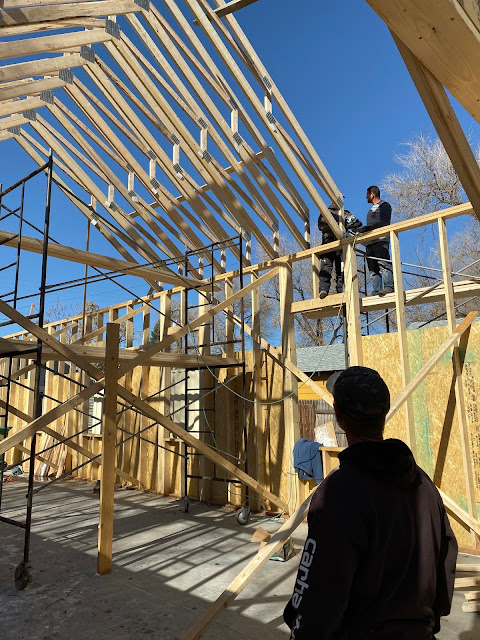 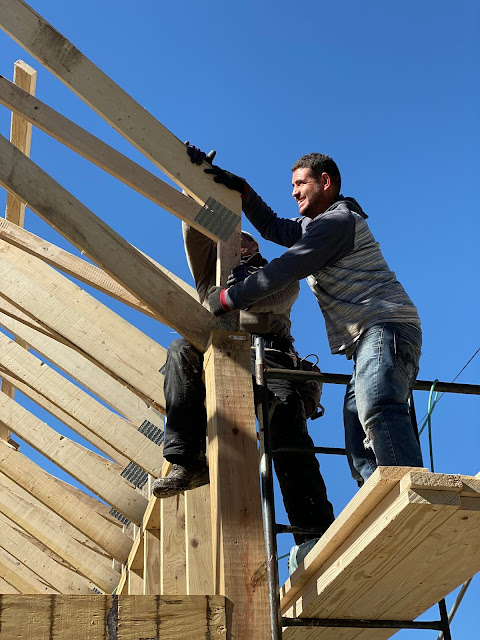 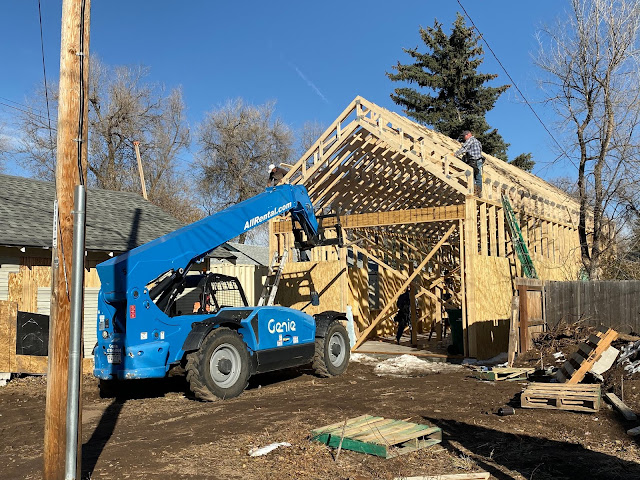 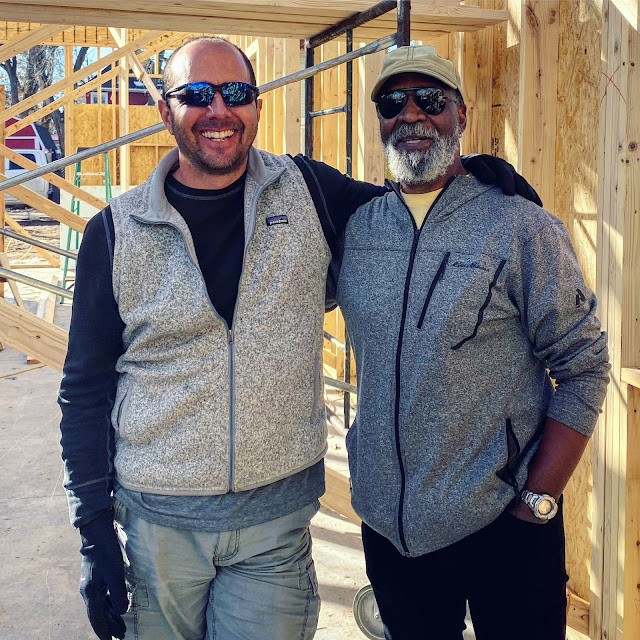 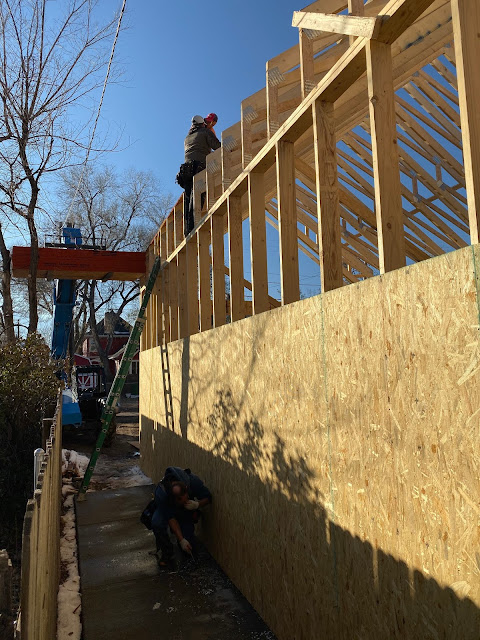 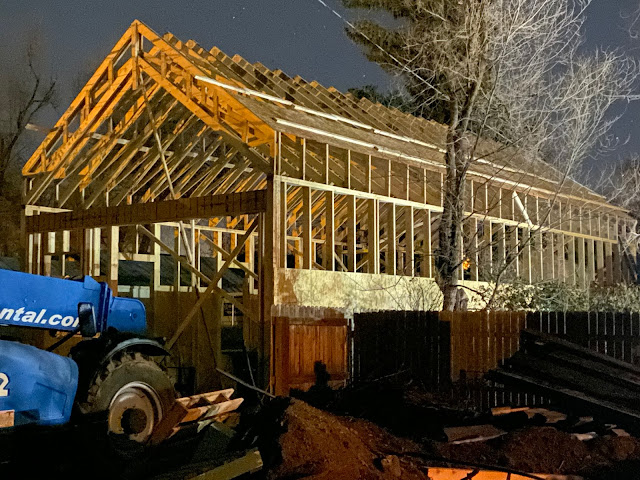 Yes, as I said, auspicious. Smooth sailing. No mishaps. But speaking of mishaps, I closed yesterday’s post by saying that I’d share one anecdote from my past that very well could have been my “exit, stage left” from this life, at the much-too-young age of 20. While, surface level, the story doesn’t have anything to do with the studio build, it does make me glad that Joe and his team are as safety-conscious and deliberate as they are, especially this weekend, working, later today, to frame out the rest of the building (gable ends, primarily) and sheathe it all, including the (gulp) steep, 9/12 pitch roof, with OSB and a waterproofing fabric.

And I’m very glad that, although my penchant at the time was to cut corners for the sake of expediency, my reflexes, at least, were just fast enough to avoid near certain death. 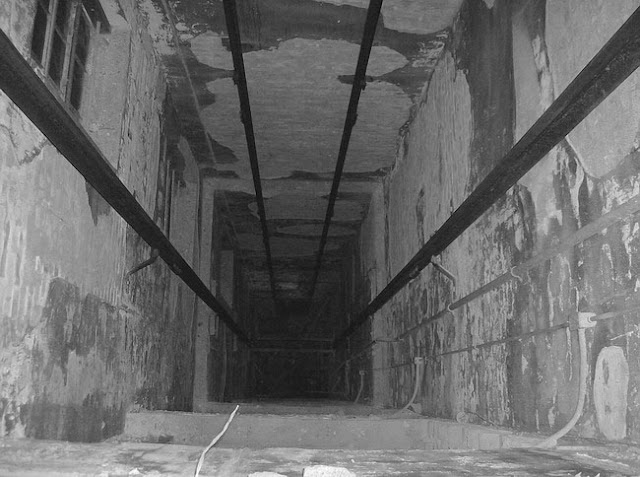 In August of 1989, after approximately three hop-scotching years of college in San Diego, Colorado Springs, Chicago, and back to Colorado Springs, I was handed the amazing opportunity of working as an artist’s assistant to Chuck Close, in New York. During my time there, I contributed in a behind the scenes capacity with work that was exhibited at Pace Gallery, Pace MacGill, and the Museum of Modern Art – even contributing some work of my own that was exhibited in the latter venue.

Brief as it was, the year and a half I lived in the city was filled to the brim with other noteworthy highlights, and yet there was one moment in particular, early on, when it all might’ve ended rather suddenly and tragically.

During the first few months of living in Manhattan, I resided in another well-known artist’s loft on Prince Street in SoHo, just a couple blocks from the studio where I worked.

101 Prince Street, then and now, has seven floors, and I lived way up on the seventh, in the loft still owned by Janet Fish and Charles Parness, who used to spend their summers/falls in Vermont and winters/springs in New York. They were allowing me to couch surf there the first few months I was in New York until I found another living arrangement.

I usually accessed the 7th floor via the stairwell.

Because while the building had an elevator, it wasn’t the kind that responds automatically to the electronic summons of a depressed button. It had a lever that had to be operated manually from within the elevator to move it between floors.

Sorry for the upcoming lengthy setup, but I need to set the stage for a while longer.

The unwritten rules of the elevator’s use were as follows: if you lived on, say, the fourth floor, and the elevator was on your floor, and someone on the first floor pressed the buzzer to use the elevator, it was your responsibility to take the elevator down to the first floor, pick up the person, who would then drop you back off on your floor and then continue on to use it for their purposes. Then, they’d be similarly “on call” to pick up the next person in need of the elevator, or else return it to the first floor when they were finished with it. In other words, though it could be a life-saver, especially when something heavy needed to be transported to the upper floors.

More often than not, the elevator was somewhere other than the first floor, and it was a hassle to wait for the person who had it to bring it down to you. Even if it was already on the first floor, it was a minor nuisance to use. It certainly wasn’t ideal, and so, most of the time, I would simply take the stairs.

Say you had a heavy load and needed to use the elevator. You’d enter the building, pulling the heavy outer door closed behind you. You’d walk past the rows of mailboxes on the right, then down the long, narrow hall to the far end, where, just to the right of the stairs stood the single, hinged, steel elevator door painted battleship gray, with its single, circular window about the size of a softball. If you brought your face right up to the dingy window and cupped your hands to block the hall lights, you could just discern, through its Coke-bottle thick glass, whether the elevator’s dim ceiling bulb was visible within or not. If you could just detect light within, you were in luck: the elevator was there. You’d head back to the mailboxes, unlock the box with the elevator door key, return to the elevator, unlock the door, leaving it ajar while you replaced the key, walk back yet again to the elevator, open the door, enter the elevator, close the door behind you, then do the same with an inner sissor gate, and finally, engage the lever to access your desired floor.

One fateful day I thought the elevator was on the first floor. I don’t remember if I checked the window. More likely, I short-cutted the process by grabbing the key when I first arrived, rather than check to see if the elevator was there first.

Only, the elevator wasn’t there.

The moment is relived in slow motion. The door is open and I’m passing through the threshold, one foot already beginning to be swallowed into darkness. At what must have been just about the last possible split second, I realize my mistake and pivot my torso to the left, which allows my left hand to just grab hold of the door and arrest my forward, and soon to be downward, movement.

Had I fallen into the elevator shaft, I would’ve only gone one floor into the basement, so it’s unlikely I would’ve died, but you never know. Perhaps I would’ve been unconscious, broken, and bleeding; helpless while rats the size of small cats converged upon me from all directions out of Gotham’s underbelly: easy pickin’s.

Could very well have been bloody well all she wrote.

Later on during my time in the city I had an occasion to go down into the basement and I made a point of viewing the spot where I would’ve landed. To say the least, it wasn’t a clean and thickly cushioned featherbed.

I just read this to my wife, who as per usual is sitting in her sofa chair across the room from the couch where I sit, laptop on lap, coffee within reach, on this pre-dawn hour. She asked me why I chose to write about the moment and I told her I think it’s because I watched an interview of a former New York-based mafia boss yesterday which had a lot to do with risk (there’s just about no riskier life than that of a made man) and, at one point, he mentioned his association with the Gambino family head John Gotti, which brought back another moment where I myself passed Gotti (walking with another man, with two bodyguards behind them) on a side street in Little Italy, late in 1990. It was about a month before the “Teflon Don” was arrested and put in prison, where he eventually contracted throat cancer and died.

In both of my personal non-incidents, a sudden move might’ve either caused or, as I’ve already related, definitely did avert something tragic.

The non-incident-by-a-hair’s-breadth serves me, now, as a kind of cautionary tale.

If I view the moment metaphorically, it reminds me of my propensity, at times, to want to cut corners, particularly for the sake of expediency. Not in the quality of my work, and I also don’t mean that taking the elevator as opposed to the stairs is necessarily cutting corners. In fact, I believe one secret to Floyd Tunson’s fountain of youth is his Manitou Springs building’s lack of an elevator, the fact that he’s lived on the third floor for decades, and the multiple times he’ll ascend and descend the passage, most days.

But if I did indeed grab the elevator key before checking to make sure the elevator was there, and definitely if I didn’t take the simple precaution of opening the door and peering in before committing my whole being to the “enterprise”… yeah, those were indications that I could be a bit hasty at times.

Without a doubt it’s something I ought to keep in mind.

Because in general, I’d say I’m more of a risk-taker than my wife. We balance each other out in that way, and I try not to twist her arm too much to get my way. Neither does she carte blanche veto all my ideas.

And yet, recently, we’ve both served as counter-points to each other regarding the current three-pronged build project, interestingly enough. It’s not an ultra-risky one. Not an all-or-nothing one. It’s definitely one that will have implications in a number of categories, both positive and negative, on our life together. But mainly, we believe, positive.

Nan’s the one who initially dangled the idea before me for months, if not years. For reasons probably having more to do with the knowledge that the idea, good as it was, would entail much time and effort, I held back.

Then, sometime in the summer of ’18, I jumped on board, and as I’ve already said, when I jump, I tend to jump. Not that I hadn’t reserved the possibility of backing out – of keeping one hand, as it were, firmly on the elevator door. Yet about a year ago, nearing the moment where we’d be financially committed, Nan began to vocalize her concerns, wondering if we were taking on too much.

Not a week later, however, we reversed polarity yet again, with me, in effect, arguing Nan’s position for her. Sure enough, immediately after beginning to vocalize my doubts, she responded that this seemed like the perfect time to be stepping out. It was a no-brainer, if we could swing it.

It didn’t take me long to come back around, and, for the past year or so, we’ve both back on board. It’s nice to know that we’re in this together, this dive into the great unknown of life in the macro and our months-long projects in the micro. We’ve been all over the board, weighed the pros and cons, checked and rechecked the math, prayed, and consulted with others.

Having entered into an agreement with John Hockman to begin the projects, late last year, things, ever since, have continued to go swimmingly and safely, if slowly, at times.

But slow and steady beats fast and fractured any day. Remember that today while you’re on the roof, boys.