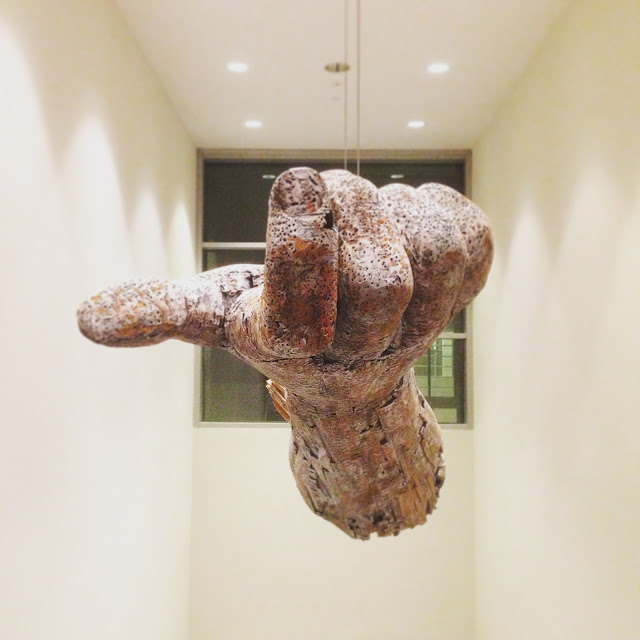 The following post was initially written and posted on February 7, 2016.
Installed again. Phew.

A week ago yesterday, five young men; Peter, Peter, Noah, Drew, and Will, and one middle aged one, completed a 45 minute door to door art installation.

No big deal if your art is, say, something you can set on the passenger seat of your vehicle. A different story altogether if it weighs more than you do, as that piece, entitled Root, does me. If you’re local, go check it out in person at SPQR, Fridays, this month, as a part of the Surreal group show. 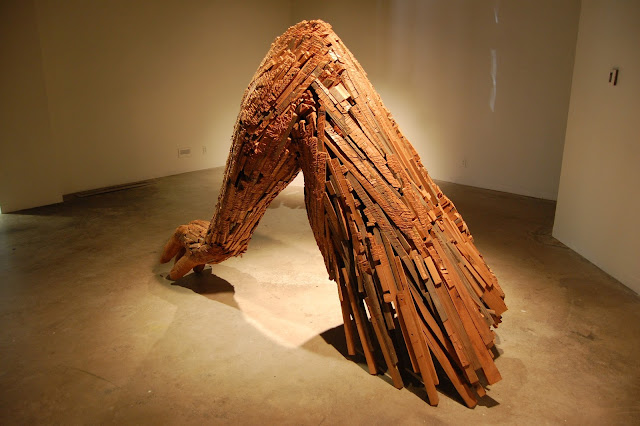 One week later found trusty aid Hank Weaver and me continuing our months’ long preparations for another installation – this time, to move my piece Lacuna from the Colorado Springs Fine Arts Center’s Hybl Screening Room to a stairwell elsewhere in the museum.

Takes me back to the year 2000, when my family and I moved one house to the south. Assumed it would be the easiest move ever. Turned out to be the hardest one we ever made. Never assume.

Only, prior to yesterday, Hank and I had made sufficient preparation for the latest move. We’d made multiple forays into the ceiling above the intended new home for the suspended piece.

Back one night in December, donning headlamp and tool-laden backpack, Hank made the first dusty, exploratory mission into the ceiling. From the gallery below I listened to the sometimes muffled, sometimes frighteningly loud banging sounds Hank made as he crawled, shimmied, hefted, and squeezed himself past a minefield of exposed screw points, unsafe drop ceilings, crumbling, dusty chunks of concrete, etc.

After what seemed like an impossibly long time to go perhaps forty feet, my cell phone vibrated and Hank said he’d made it to the edge of the drop ceiling above where the museum wanted us to put the piece. There were, unfortunately, no I-beams to secure to anywhere nearby, and the tile roof directly above the intended location wasn’t weight bearing.

However, on either side of the 10-ft wide drop ceiling were the tops of the two vertical side walls – each, a sheet of 3/4″ plywood laminated to a sheet of 3/4″ drywall. Hank stood on one. Super secure.

So, after a dusty Hank exited the access hatch with his measurements, I set about to make two long steel beams to span the drop ceiling. They had to be made in halves, which would bolt together after Hank and I had them nearly in place, as to get anything 10′ long through the labyrinthine netherworld’s obstacles would have been impossible.

Here’s what I made: 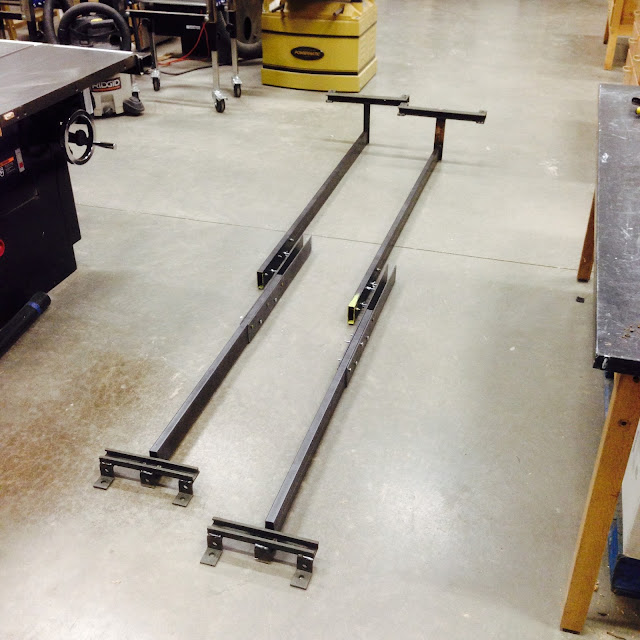 In January, Hank and I returned to the museum one night after hours and installed the two beams. We brought three planks of wood, using them to span the beams we were placing approximately 45 inches apart in parallel, as a kind of deck for Hank to work on.

Yesterday, I made a run to Lowe’s around 8 am to pick up some stout rope, hardware, etc.

At 9 am, Hank met me at the shop and we grabbed a ladder, tools, furniture pads, etc., and headed to the museum.

By 1 pm, Hank had drilled two holes in the ceiling and secured the two cables I had fished up to him from the top of the ladder. We were ready for a tasty lunch in the museum’s upscale cafe, only neither of us were dressed for it. Hank, in particular, in ratty t-shirt, slacks, and sneakers, and fairly covered in a fine, white dust, looked like the sole survivor from an explosion in a flour factory.

Additional help arrived at 3 pm. Blake, Jeremiah, Floyd, Ian, Lee, and Luke met Hank and me in the Hybl Screening Room, where we detached Lacuna from its hanging cables and onto a rolling cart. 10 minutes later, the large rolling elevator door swung open on the museum’s second floor, and the piece was carted to the top of the stairs.

I’ll let the following photo essay, courtesy Floyd’s wife Flo, do the rest of the talking.

Except to add that, unlike my family’s short move which ended up being the most difficult one we’ve ever experienced, yesterday’s, like the week prior’s, was smooth sailing.

Some Jimmy Fallonesque, yet heartfelt, thank you’s are in order.

Thank you Blake for your belief in me.

Thank you, Tunson, for the same.

Thank you both, as well as Jeremiah, Gregory, Ian, Lee, and Luke, for your stellar assistance yesterday.

Thank you, stretch wrap, for binding said extension ladders together at their tops, forming an A frame, in order to access the ceiling above the piece, to attach one set of cables and detach another.

Thank you, Fitbit, for recording the day’s mileage: 9.01.

Thank you, custodial staff, for sweeping up Hank’s dusty tracks.

Thank you, security guards, for opening the doors.

Thank you, Diebenkorn, for your inspiration, whenever we walked by your work in the galleries. As well as you, Sargent, Marisol…

Thank you, Hank’s pickup truck, for not exploding. You are a wonder.

Thank you, Colorado Springs Fine Arts Center at Colorado College, for allowing me to display my work in your venerable institution.

Thank you Nan, for leaving the lights on and the home fire burning.

Last but not least, thank you, God, for all these “hands”, especially my own. 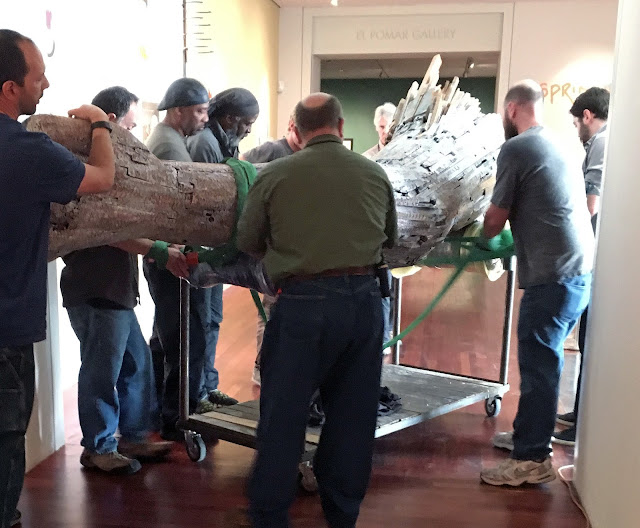 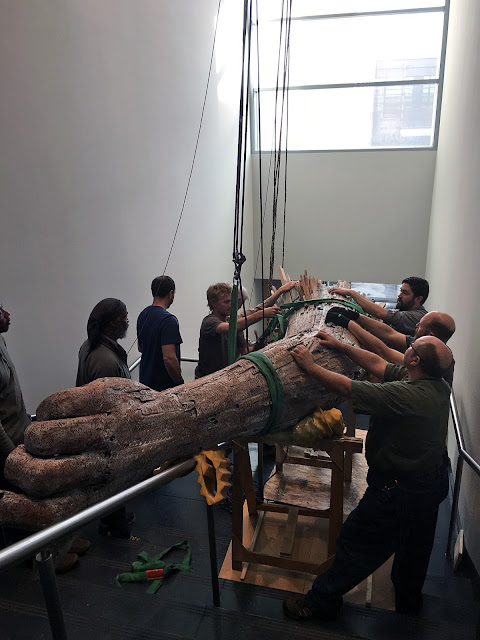 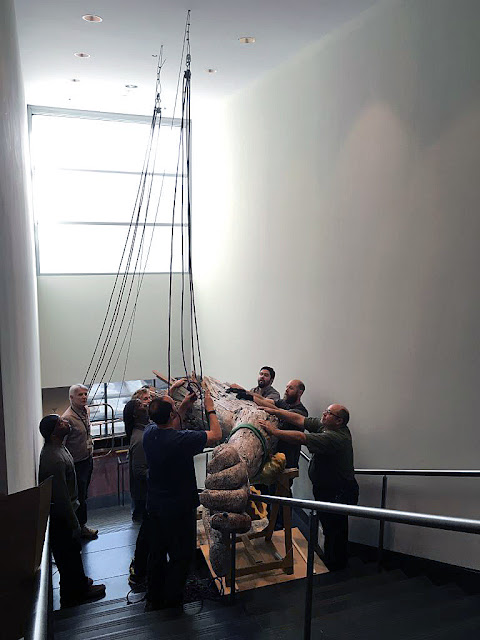 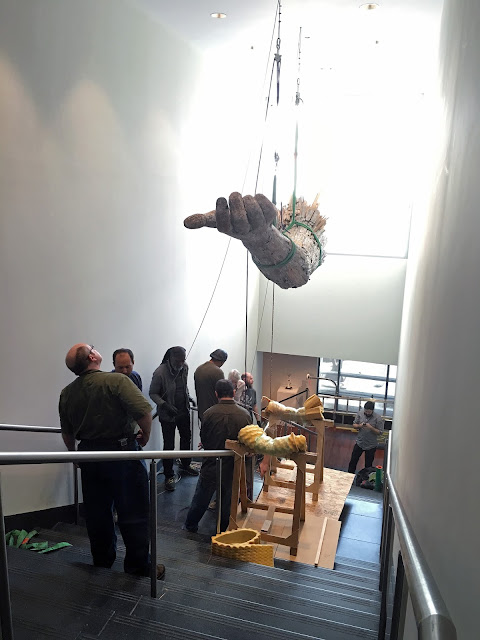 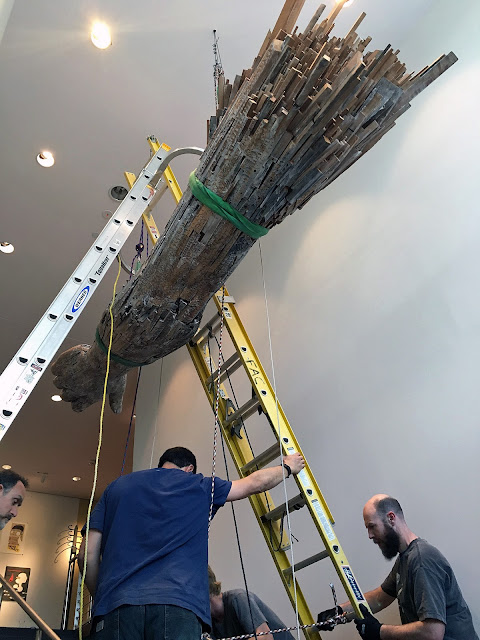 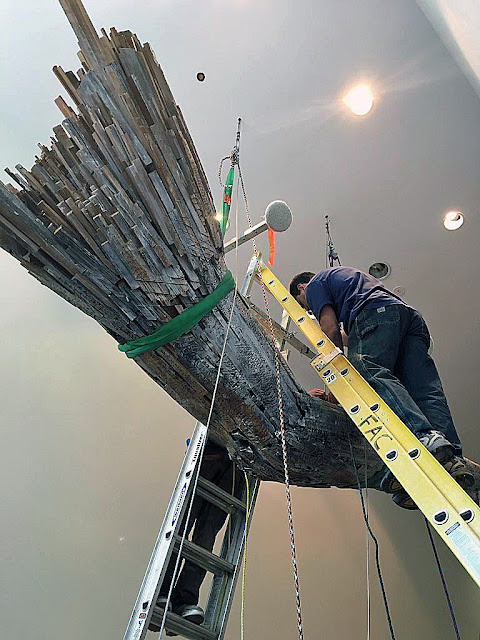 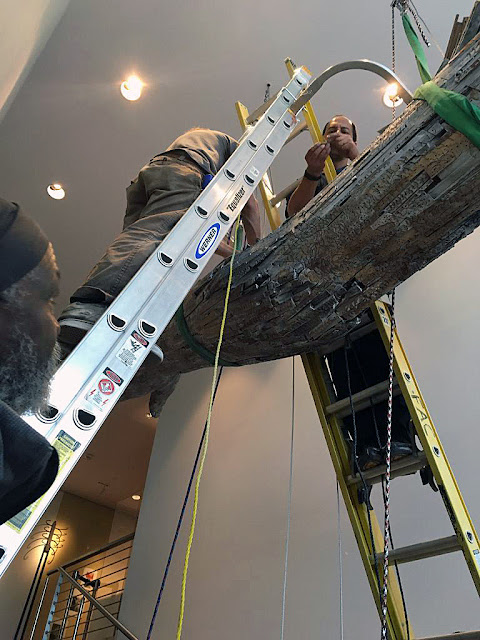 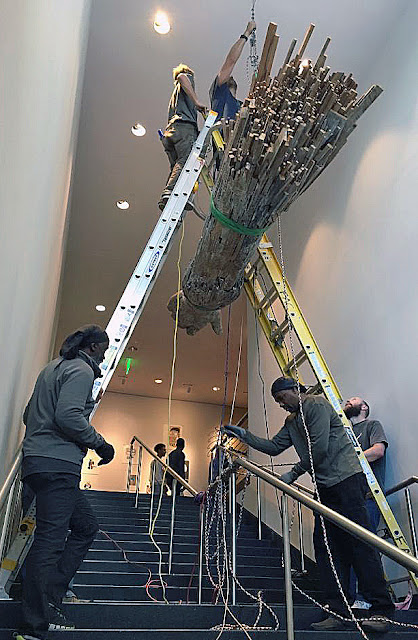 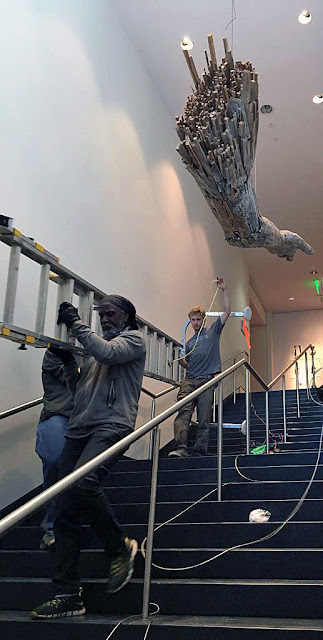 Below, a few Instagrammatized (follow me!) photos of my own last night, while waiting for Hank to complete his final mission to wrap things up somewhere above. 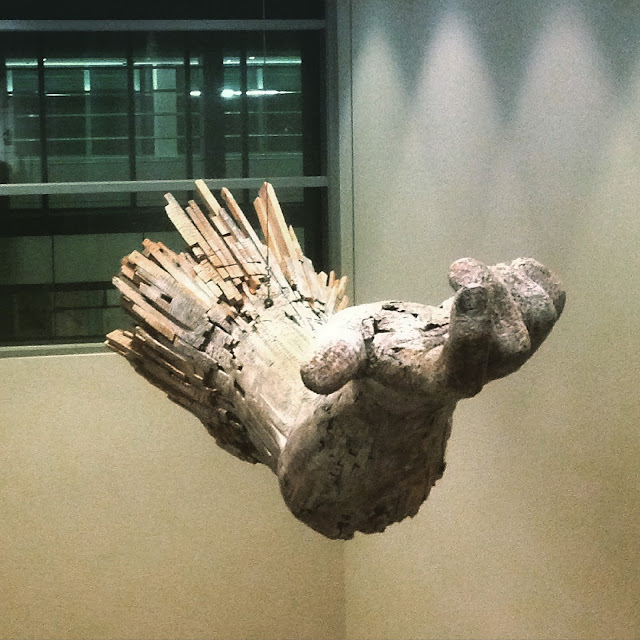 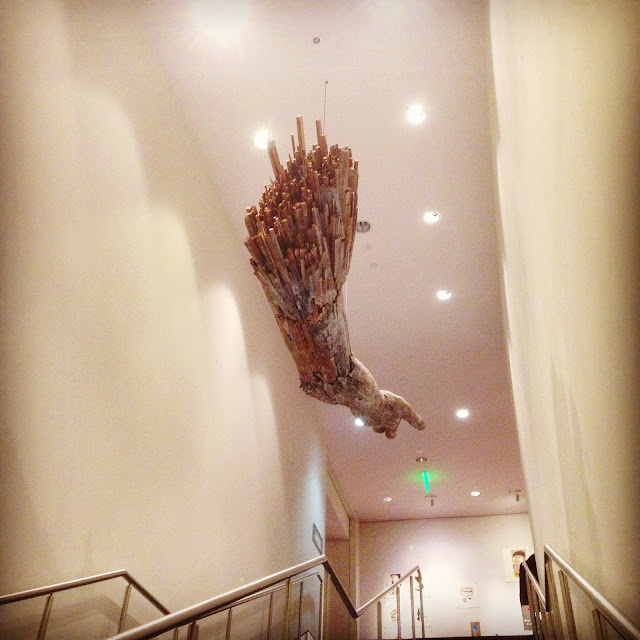 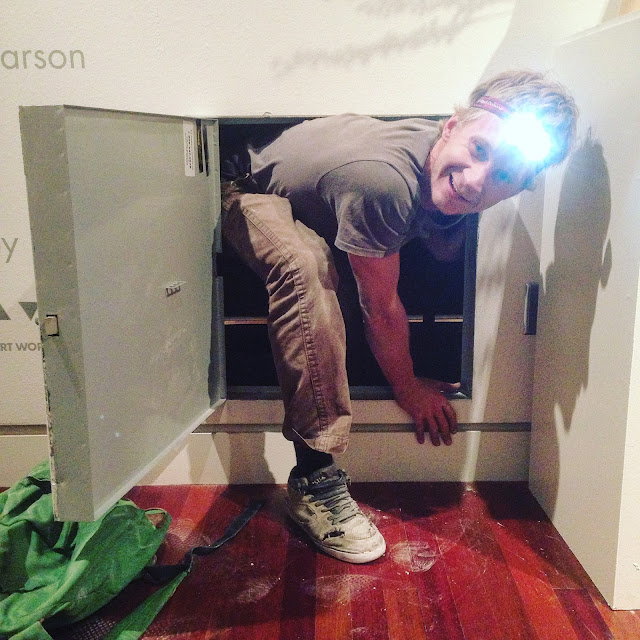