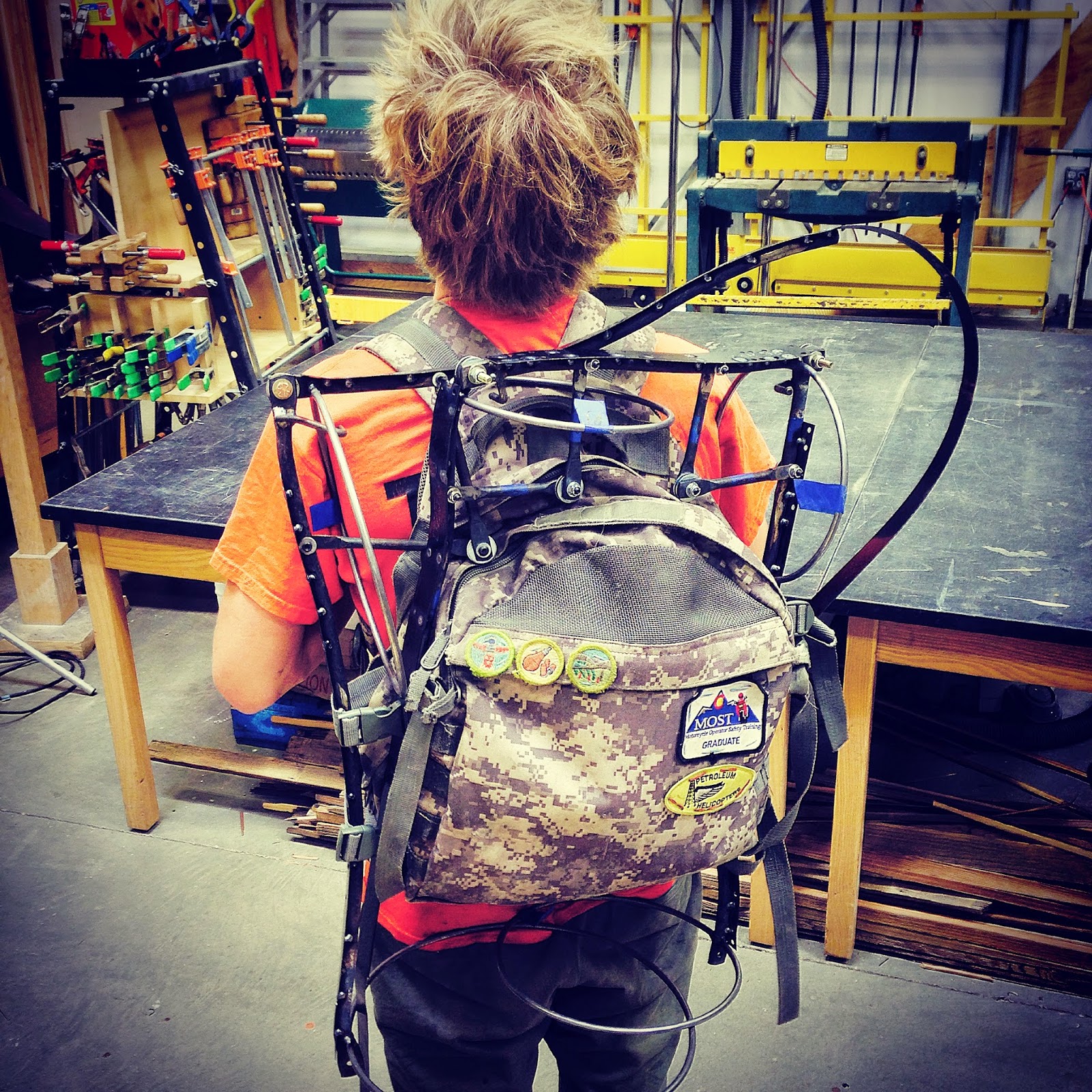 The other day, Hank Weaver called. He’s been living in the beautiful Roaring Fork Valley of Colorado for a few years, first, working in Snowmass for the Anderson Ranch Arts Center in the Sculpture Studio, and, for the past year and a half, in Carbondale, as one of the artist James Surls‘ studio assistants, along with Tai Pomera.  He’s learning from the best.
I first got to know the tow headed, wiry, perpetually grinning Colorado College Studio Art major while walking to the school’s health center, back when I ran the Art Department’s sculpture shop. One of his fingernails was split longitudinally from sloppy technique on the foot shear (thankfully he had the tip just under the hold down, not far enough to get cut off, however, from then on, I gave the machine, visible at the top right corner of the photo above, the misnomer Hank Shear). Anyhow, in the half an hour or so that I had the good fortune of one on one time with Hank, I just knew it: with the exception of his fingernail, he was a keeper. Don’t ask me how I knew – it had nothing to do with his considerable artistic skill or abilities as a builder. Until that first “smashingly successful” date, I can’t recall anything Hank worked on in class. To me, he was just one of the many nondescript faces that took art classes at the college (prior to their senior year, when I got to know the art majors much better).

For sure, if you supervise a wood and metals shop and make note of someone who has just had a run in with a shop machine, it typically isn’t to hire them, quite the opposite. Perhaps some other time I’ll try to reach back and ponder just what it was that caused me to think Hank had the right stuff, as an artist and a maker and a colleague, but not today.
Today, I need to spend some time on YouTube, listening to tutorials on laying out a building, as I’ll be doing that today in advance of digging a foundation trench tomorrow. Finally breaking ground on a new studio. In the mean time, I thought it might be nice for you to hear Hank’s point of view from a few months after his fortunate/unfortunate run in with the Hank Shear, when, just weeks before the end of his freshman year in May of 2014, he walked into the shop, and, as I often did at that time of year, I asked him what he was planning on doing over the summer.
He said he was hoping to get a grant from the Dean’s Office to spend the summer painting a mural in downtown Colorado Springs. That sounded alright to me, but I didn’t let it show, as I had something self-serving in mind. I decided to employ my Jedi mind powers.

Once I’d explained the concept behind my then upcoming show at the Colorado Springs Fine Arts Center, Hank excitedly said he’d love to be a part of it. He did indeed receive a grant from CC to assist me, for which he and I are extremely grateful; despite the way Hank portrays things at the end of his essay below, the truth is his talent, smarts, work ethic, and easy-going, can-do disposition were invaluable to the success of the sculptural piece he, Niels (my other excellent summer assistant mentioned the other day), pinch hitter AG Werschky and I created together.  Truthfully, at times, it felt more like I was Hank, Niels, and AG’s assistant more than they were mine.

As one of the requirements for the grant, Hank had to write an essay about the experience for the school’s student newspaper, the Catalyst, which I copied and pasted into the body of this post below.
After our call, one of three recent calls from CC alums, including another I’ve worked alongside of who also lives in the Roaring Fork Valley (hi, Kat!), I thought it again: man, I wish Hank were back. And Kat. And Niels. And…

Hank may or may not know it, but it’s my sincere hope that we get to work together some day, and my Jedi skills have only gotten more sharp in the intervening years. I could use his augmented tig welding and other sculpture fabrication skills, learned at the feet of two masters, his sunny disposition and spirit. Plus, none of my machines have been named after anyone, save the Andy (band) Saw…
Months of sweat and gallons of coffee: Colorado College students and Andy Tirado unveil steel sculpture
October 7, 2014 by The Catalyst  Guest Writer Hank Weaver
Last night I was sitting under an eight-foot tall hand. This hulking mass of metal, attached to an 11-foot forearm of crisscrossing steel, has never looked more beautiful. I gently push a pinky finger the size of my leg and watch the monster precariously swing over me. I am not scared of being crushed. Maybe because I know the sculpture is chained to two hefty I-beams in the museum’s ceiling. I trust the rigging of alpinist extraordinaire Niels Davis, and moreover the rigging’s approval by Andy Tirado, the Dr. Frankenstein of this metal monster. More likely though, I do not fear death by gravity from this sculpture, because it has already killed us. Sorry for the melodrama, but completing this sculpture became one of the most humbling experiences of my life. It all started last February when Andy Tirado, supervisor and guru of the 3-D Arts Shop, developed the concept for a show offered to him by the Colorado Springs Fine Arts Center. Andy wanted to lift art’s curtain of mystery concealing the underlying process, and display this process to the public. To achieve this, Andy spent his nights from the end of February through mid-May completing a series of large-scale drawings, all while maintaining his fulltime job with the College during the day. This was a massive undertaking, as he completed 23 individual drawings, averaging a size of 8×8 feet. Andy, Niels, and I installed these pieces in the Fine Arts Center mid-June, setting the stage for a spectacle of process and all of it’s pitfalls. The stage was a 20×20 foot work surface that we assembled in the middle of Andy’s exhibit. On this surface, we spread out four worktables, a drafting table, and a metal break. Museum-goers were free to walk around the exhibit appreciating Andy’s drawings, while also observing us building the sculpture in the center of the exhibit. Despite our best efforts to organize, the work area quickly became cluttered with tools, a coffee maker, metal strapping, and a graveyard of comically phallic finger prototypes. 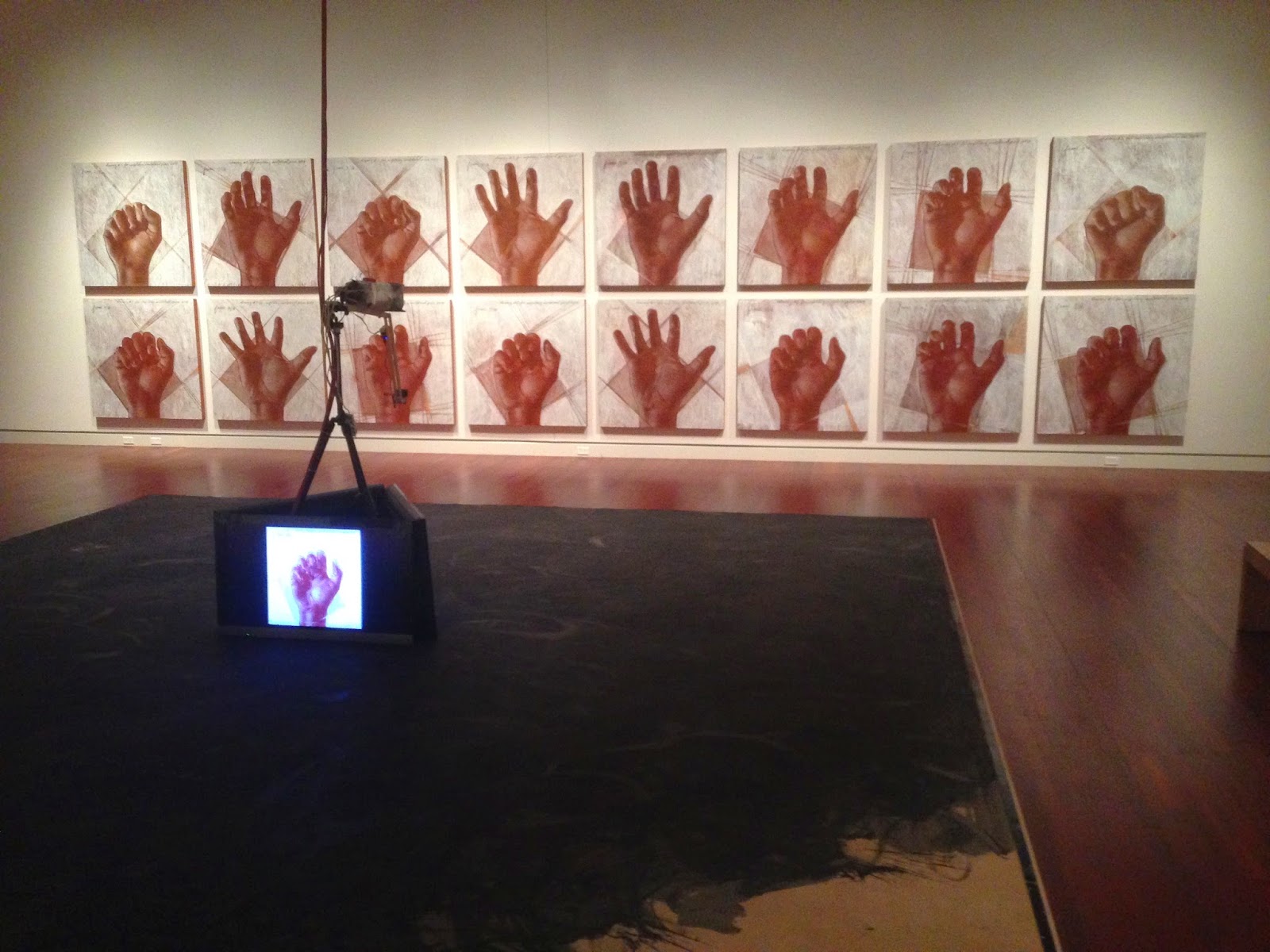 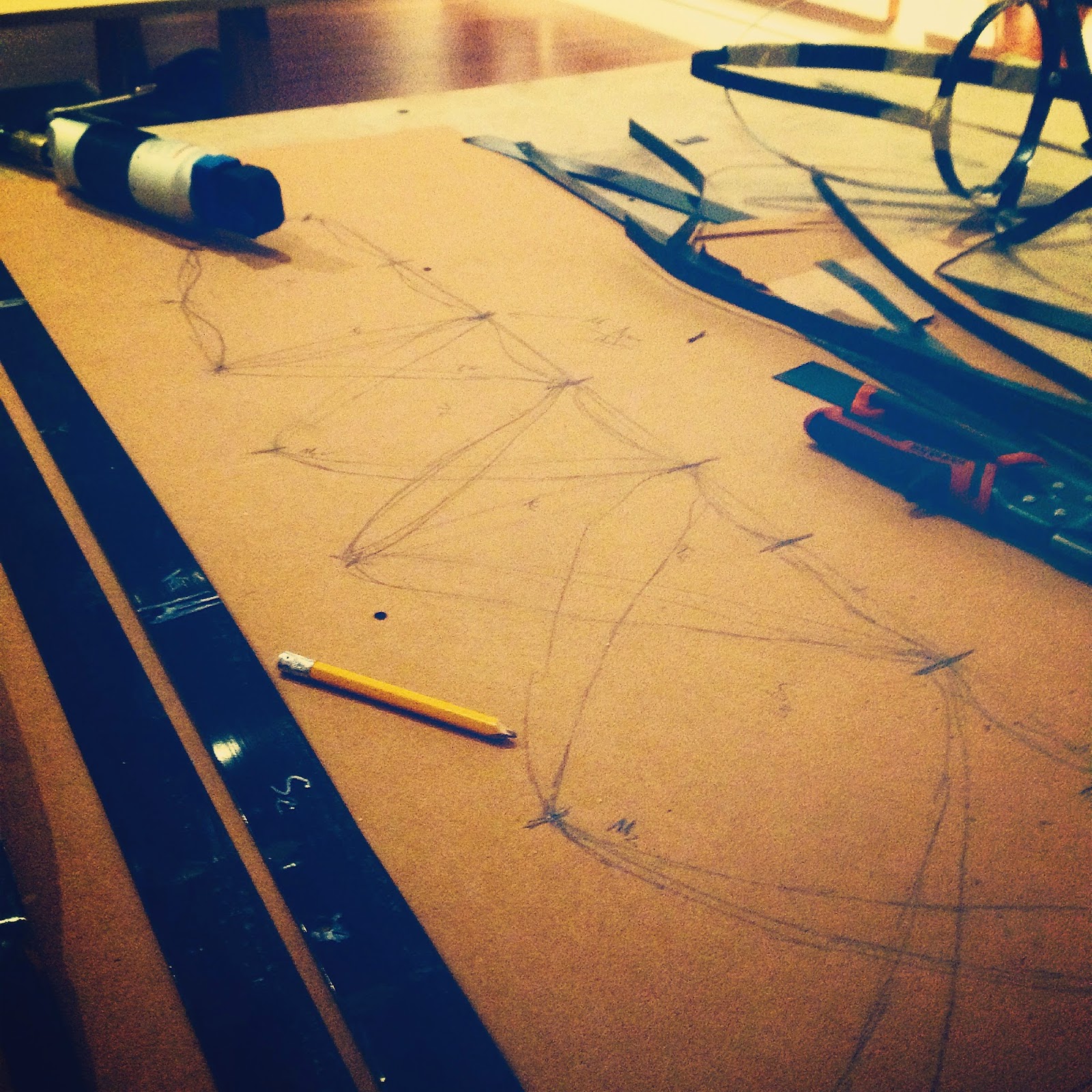 Over the course of July and August, we developed the working prototype of a finger that would achieve a naturalistic range of motion, controlled by six cables each. Andy maintained his nocturnal work schedule to fabricate the underlying steel structure, while I would assemble the parts in the museum during the day. I often felt like a performance art piece myself under the gaze of the exhibit’s visitors. 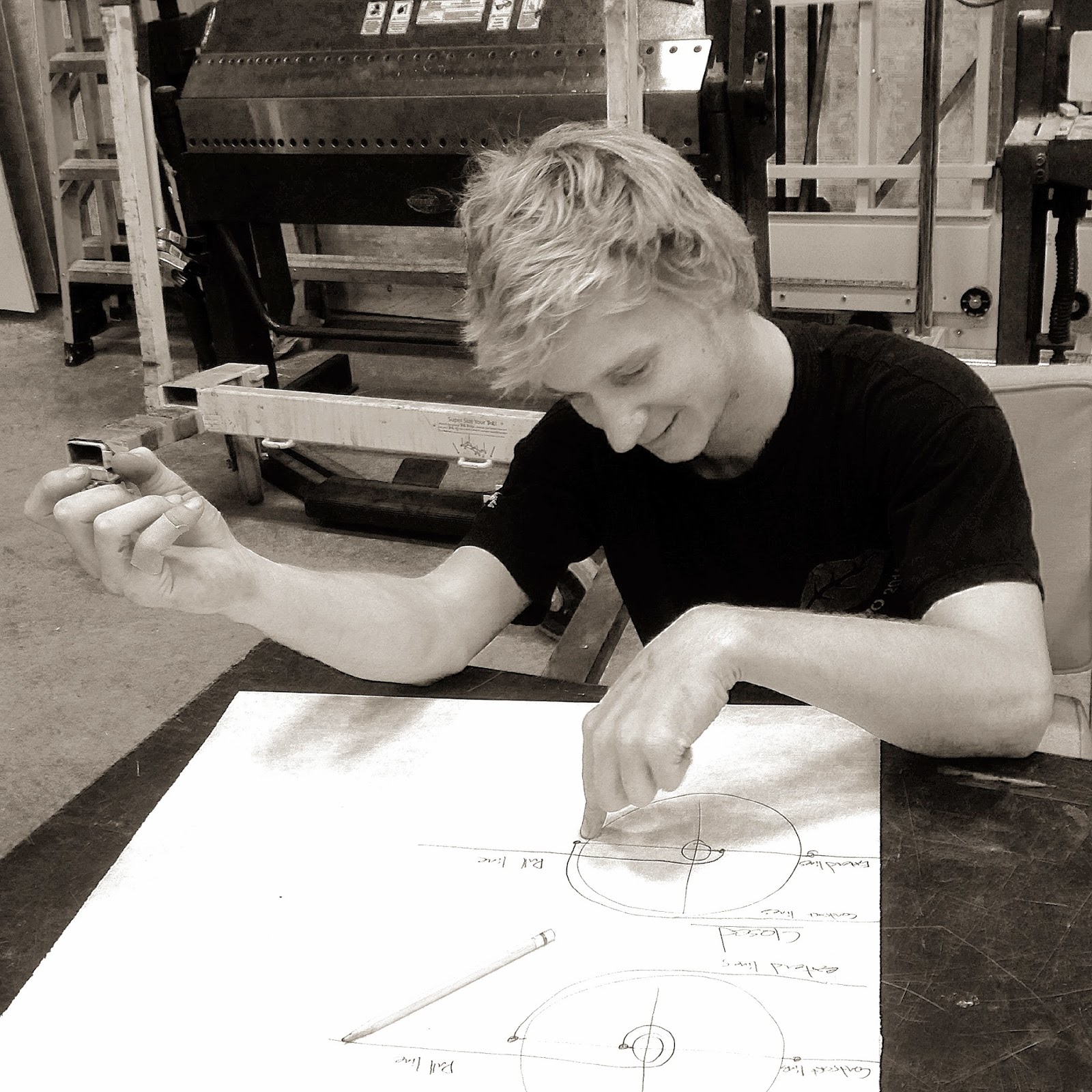 At the start of school in September, we had two weeks until the sculpture’s unveiling and little more than a collection of fingers and framework. With Andy’s full time job and my return to block one frenzy, it was clear that we needed to start managing our expectations and compromise in order to fulfill the commitment. Andy adapted his plan of a 50-foot-long horizontal arrangement of two hands reaching out, to a single hand hanging from the ceiling. While the drop in scale was disappointing, the kinetic motion of the sculpture was a priority and deserving of our full attention. 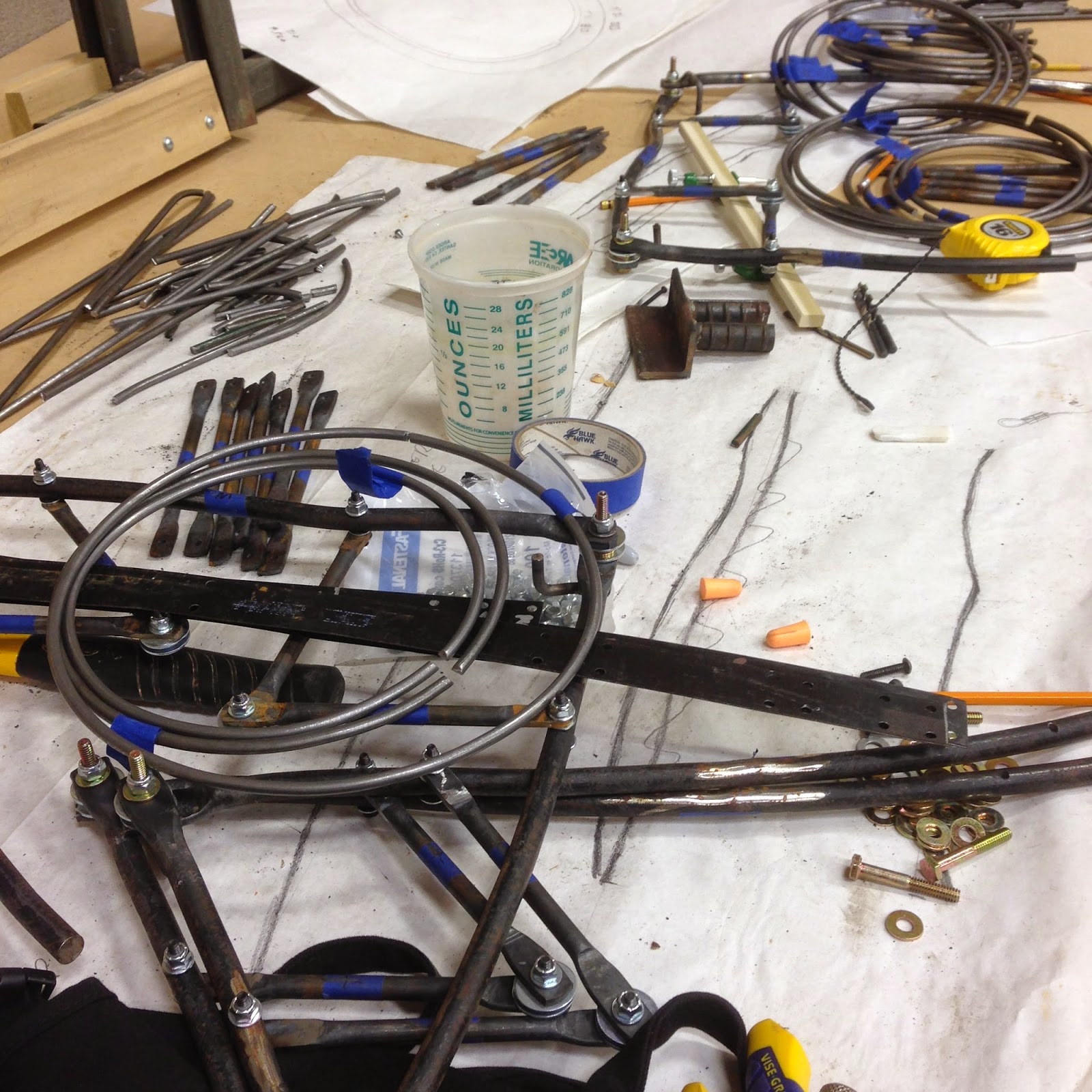 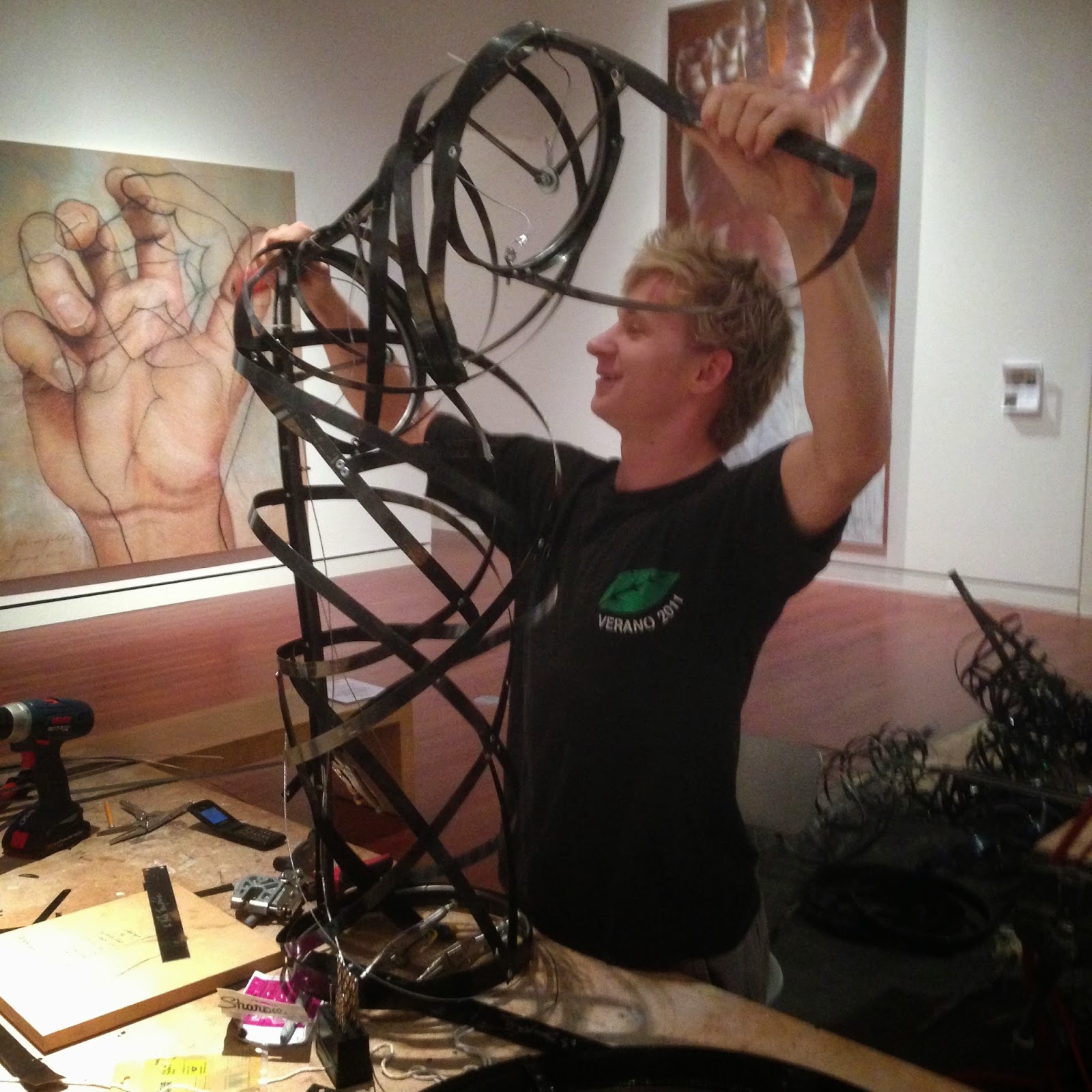 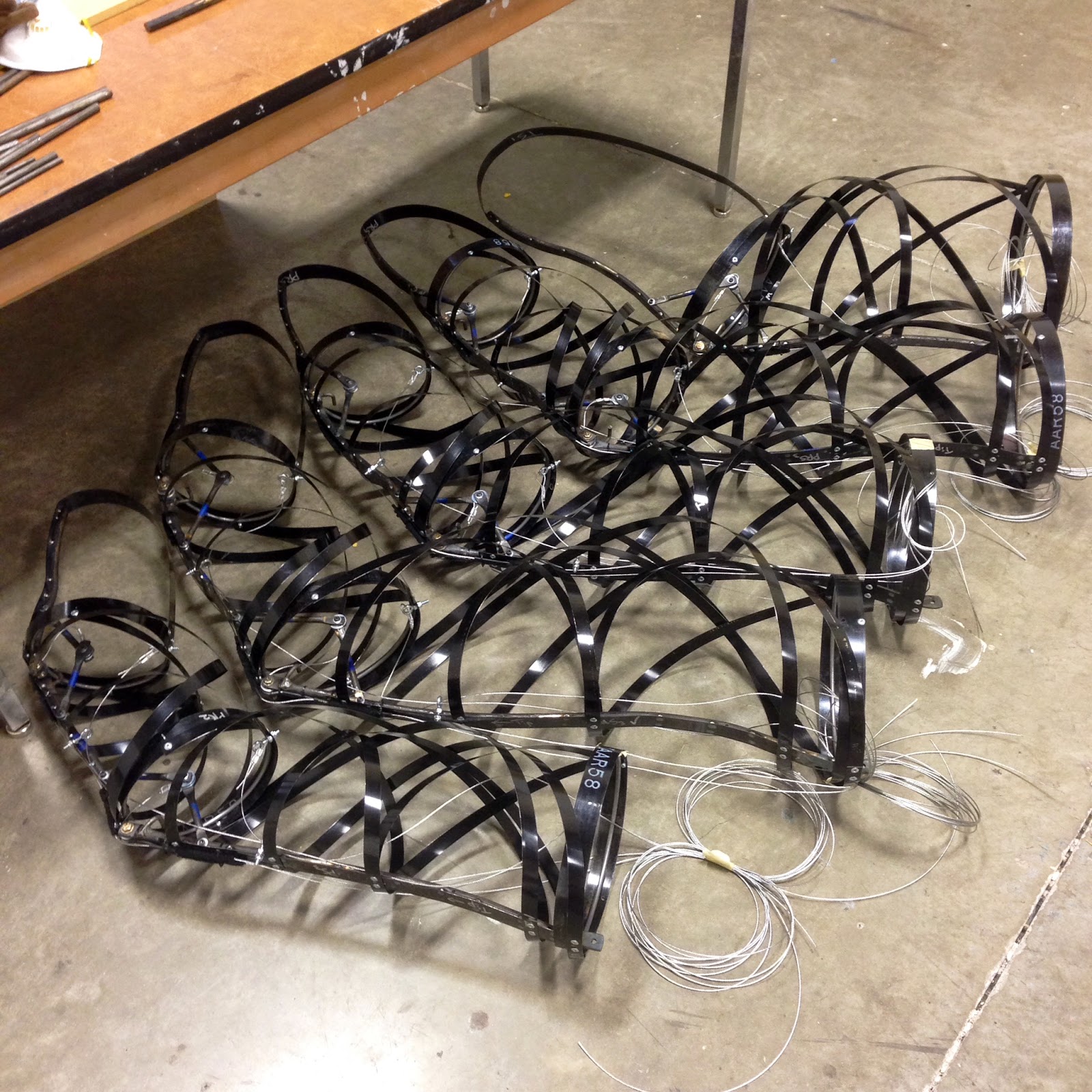 I had been fleshing out a mechanical design that would simultaneously control all 28 cables of the hand, but it soon became clear that my design only worked in a theoretical physics playground where things don’t break and attachments are seamless. So with a week left, Andy called in a fixer of sorts, A.G. Werschky, a mechanical engineer who was kind enough to devote his free time from launching satellites to bailing us out. My design was quickly boiled down to its core concept, which Andy adapted and fabricated out of metal, while A.G. threw together some circuit boards and an electric actuator motor that would control it all.

Niels Davis (left), AG Werschky (right top) and Hank Weaver (below) putting some of the final touches on “Open Hand” prior to installing it in the museum, September 12, 2014. Photo courtesy the Colorado Springs Fine Arts Center.

Come the unveiling on Sept. 12, we had finished. The sculpture looked like a hand, and was kinetic, albeit slowly. Seeing the sculpture hanging by itself without the sprawling work area I was confronted with contradicting emotions. Superficially I felt an immense relief, as my last few weekends had been dominated by 12-hour workdays, and for now, the hand was working. Strangely though, I felt a tinge of dread about moving on. Over the past three months I had become seriously invested in this hunk of metal, and the thought of no longer having a project to define my free time away from class scared me. I was proud of this monumental feat of design that we figured out step by step in full view of the public. However, I was also disappointed that the original design over was twice the size and many times faster moving.

These fleeting emotions have given way to something all the more powerful in the past few weeks. The knowledge that I have gained from this experience has changed my understanding of art. There is a stereotype of an artist as an inherently skilled person that is easily able to conceive work on command and magically produce this work without breaking a sweat. I have learned that this inherent skill is, for the most part, irrelevant to success. Art cannot be produced without simple hard work. All of the far-reaching talents that Andy has are useless without the incredible amount of hours he employs those skills. This sculpture wasn’t built out of a strong concept, but out of millions of small cuts on our hands and gallons of coffee consumed after midnight. Moreover, you can work until you expire, but in the end, compromises are necessary to truly realize a concept. It is ironic that compromises are key to meeting commitments, but that is the reality I have discovered. Compromising does not equate failure, but rather enables success. Every time I have revisited the sculpture, up until last night as we began taking the show down, has been more beautiful, and I have been more thankful for taking part in this adventure. I am incredibly grateful for the funding provided to me by the Venture Grant Committee and Dean’s Office. Most of all, thank you to Andy Tirado for allowing me to constantly mess up, show up late, explore, and learn. 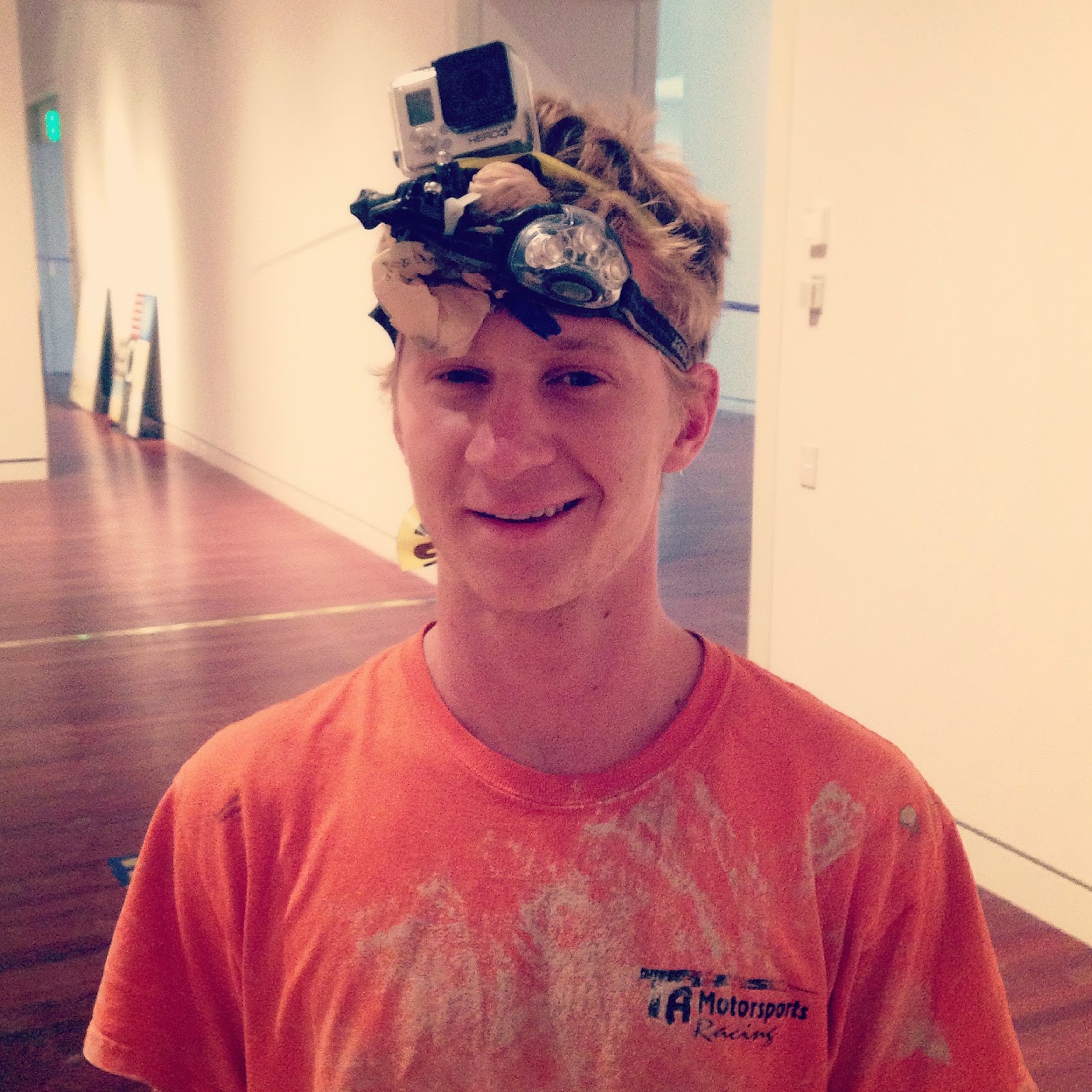 Hank in June after the first of many forays into the dusty ceiling and hollow walls of the museum.