Yesterday, I mentioned that my cousin, Sarah, recently texted me that her 10 year old son, Beau, has been drawing a lot, and probably wants to know if he’s on the right track to becoming an artist, as he keeps asking how long it takes.

When I received that, I quickly responded, “…do you want me to lie to him or tell the truth?”
It was a knee-jerk response, similar to the one an artist friend of mine with public art experience and resultant PTSD gave me when I called and asked him if he had any advice for me, as I was contemplating applying for a public art project back in April.
“Don’t!” was his succinct, impassioned advice.
Having thrown caution to the wind, a few months later, I texted, “Whelp, it appears that I received the public art commission…”
Again, he responded, “Oh no! Did something bad in a previous life? Haha, CONGRATULATIONS! I joke. You may work very hard to complete the commission, but it will be worth it.”
From his lips to God’s ears.

From years of experience, Beau, I would say the same thing about being an artist: it involves very hard work at times. I had to spend years learning how to use the tools I had at my disposal, such as a really good, compact rock hammer, but it’s been worth it. In fact, I’m told it’s likely I’ll get parole the next go ’round, if I keep working hard, keep my head down, don’t get into any more fights. (Ok, so my wife and I necessarily have to rob banks from time to time to augment my income as an artist. This last time, we were caught after I ran our car into a tree. Usually Nan drives, but she’d lost her license from the last time we were caught. I admit, I had zoned out, fascinated by the negative space in between the tree and a nearby building. Hazards of the profession. But you should’ve seen that negative space.)

A good set of compact steel files is always nice to have on hand. Or, say, in one’s shoe.
Of course, I could add caveats galore. For one, I don’t necessarily believe one should simply follow their bliss in life, any more than I should have stopped watching the road.
That is, you shouldn’t assume that simply following your passion, even if you work really hard at it, will guarantee success, which itself is a word that means wildly different things to different people. For some, it means having a nice house, living in a nice part of town. For me these days, it means digging a 50 yard tunnel every night without getting caught.
I could add statistics; show just how rare it is for someone to break out of – I mean – to make a living as an artist.  Back when I worked at the Colorado College, I heard that the studio art major was second only to the theater arts in terms of the smallest percentage of graduates able to find a job in their respective field. (The smallest graduates, incidentally, are those studying horse jockeying.)
According to Straighterline Blog, if you graduate from college with a degree in the arts, here are the percentages you’ll face: Recent college grad unemployment 10%, experienced grad 6.7%. On the surface, that doesn’t sound so terrible to me, but they rank the category third among the seven majors with the highest unemployment rates. 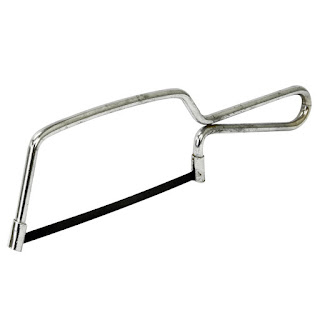 Junior hacksaws make nice, compact gifts for needy artists
Not only that, but in terms of income, according to Business Insider, art teacher education ranks 17th among the 21 lowest paying college majors, with a starting median pay of $35,300 and a mid-career median pay of $51,300. That may sound like a lot to you, Beau. And, if you’ve chosen to, say, become a fine artist, even mid-career you’ll probably look at those numbers with much the same filter that you do now, or, say, someone currently incarcerated, might: Man! Wouldn’t that be swell! I’d be rich!! But let me tell you, the article is correct: it ranks. (The article lists “art teacher, graphic designer, and administrative assistant” as three common “art teacher education” jobs, by the way. I think the reason “fine artist” isn’t listed is because it doesn’t fit the typical job mold. Not that I’ve looked, but I don’t think you’ll find “fine artist” on Monster.com, either. Along with horse jockeying, it’s an outlier).
Speaking of outliers, Beau, you might read Malcolm Gladwell’s book by that title when you’re a bit older. I read it in my early 40’s and, as I have with all of Gladwell’s other books, found it engrossing. It lists a number of factors that contribute to high levels of success, some of which, unfortunately, you will have no control over. Others, such as the 10,000 rule, you will. (10,000 hour rule nay sayers, the last link’s for you).
So yeah, even if you’re employed as an artist, there’s a good possibility, as with the acting field, that you’ll need to find some other way of keeping food on the table for a good, long while, if not for your entire career. If you decide to marry, choose a spouse carefully, as I did, with my simple, three question survey:
1) Do you have any moral issues with robbing banks?
2) Are you experienced as a getaway driver?
3) Do you have a set of wheels (as I can’t afford one)?
If they answer no, yes, and yes, they’re in. 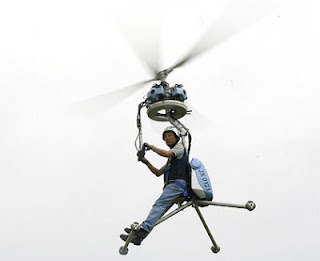 Neither here nor there, but especially not here: this helicopter might be able to be controlled remotely, and looks simple enough to operate
Beau, it’s 3:57 am and I really should get back to my chiseling. I’m not sure your mom will read this post to you, and with good reason: Re-evaluating your mom’s text, it sounds like you’re simply wanting to know if you’re on the right track to becoming an artist. You aren’t asking if you should become an artist, and you’re definitely not asking me to put mental roadblocks in your path – any more than I asked that Elm tree to block mine.

Or, maybe she’ll allow you to read it, whereupon you’ll respond the way you did when she showed you the trailer for @darkwatersmovie, which, as you know, you’ll be in, playing the son of actors Anne Hathaway and Mark Ruffalo. Your mom said you replied, “Cool. I’m going to play outside now.”

Ditto, my brother.
So yeah, if all you want to know is if you’re on the right track to becoming an artist, and you’re doing a lot of drawing, I’d simply, and sincerely, respond “You bet!”
And again I say, come and visit sometime. Bring a cake.