The actor Rutger Hauer passed away recently. On that day, I pulled up a YouTube video of his monologue, as the dying replicant Roy Batty in Ridley Scott’s original Blade Runner movie (not an epic but, probably because of Vangelis’ evocative score, a perennial favorite of mine). Known as the “Tears In Rain” soliloquy, in a heavy downpour of rain, Batty delivers the following lines, with dramatic pauses, to Rick Deckard (Harrison Ford), whose life Batty has just saved, despite the fact that Deckard was trying to “retire” him:

“I’ve seen things you people wouldn’t believe. Attacked ships on fire off the shoulder of Orion. I watched C-beams glitter in the dark near the Tannhäuser Gate. All those moments will be lost in time, like tears in rain.

I showed the video clip to my wife, Nan. Overlaid with Vangelis’ evocative score, (and especially on the day of Rutger Hauer’s death), it’s a powerful, moving scene, and it brings to mind the time Haley, one of my student shop minions back when I was the sculpture shop tech at the Colorado College, asked if I had a favorite movie. My response to her dovetails with my favorite works of art, which in turn dovetails with my desire – I think, deep down, a desire shared by one and all, to live an epic life.

Now, I enjoy different kinds of movies for different reasons. I appreciate some comedies, some dramas, some science fiction movies, some oldies, some WW2 flicks, etc. I’m anything but one-genremensional. As with Blade Runner, they don’t all need to reach the height of the yardstick I’ll describe today for me to slap a blue ribbon on their jackets. It’s like my taste in, well, food. Sometimes a big salad with all the fixin’s is what I desire. At other times – heck, just about any time – it’s pasta. On occasion it’s jalapeño flavored Cheetos. But if I had to choose one food to eat for the rest of my life, it wouldn’t be the latter.
The length of an average feature film is 110 minutes. The original Blade Runner is 117 minutes long. Return To Me, mentioned in yesterday’s embarrassing post, clocks in at 115 minutes.
My all-time favorite film, and incidentally, my brother Gijo’s as well, the epic Lawrence of Arabia, clocks in at 228 minutes.

All that extra time results in increased depth, heightened beauty. Scenes and conversations are developed in a deeper, more lingering way, consequently transporting me further into the narrative. The camera lingers on sweeping, desert vistas.
For a film to really move me, however, it has to involve an ethically or mentally ‘strong’, though possibly flawed, protagonist – someone faced with a tough situation who does what few others would to overcome it, often involving personal loss.
Add excellent writing, stunning visuals, incredible acting, and a superb, often evocative musical score, and you’ve hooked me.
Earlier I said that my answer, the one I gave Haley, relates to my love of art. It also ties in with my love of climbing. In part, it also relates to my artistic journey thus far. Definitely to my inability to edit my writing. And all of that relates to life.
Last night, my friend Rick, who I’ve known since middle school, and who lives in Ohio with his wife and family, texted that he’s on the way to Colorado Springs and hopes we might get together for a climb. I hope so.
Sometimes the path I’ve taken, in relation to art, resembles a good, long mountain climbing trip.
Despite growing up in Colorado, I didn’t start climbing until sometime in my high school years, when my friends were able to drive.
As mentioned the other day, I’m a middle of the road climber – nowhere near the level of many students I rub shoulders with at the Colorado College (arguably the school producing the most preeminent climbers in the US, as noted in an Outside Magazine article, School of Rock).
Most of the climbing I’ve done has been limited to Colorado. While some of my climbing friends are rather fixated with ‘bagging’ all of Colorado’s fourteeners, of which the official count is fifty-four, I am content simply getting into the high country and enjoying the beauty and the effort involved in reaching the summit and returning safely home – the draw of the enterprise is equal parts aesthetic and rigorous, camaraderie-laden adventuring. As a result, rather than “one and done”, I’ve climbed some mountains over and over.
Sunny, warm days with only scattered high clouds and no more than a light breeze are highly desired on climb days, especially on technical climbs, ones that involve bringing climbing gear due to the difficulty of the route. While all of Colorado’s fourteeners can be climbed without technical gear, my friends and I began to gravitate to alternative routes that necessitated learning how to use ropes, harnesses, and ‘trad’ gear: climbing hardware that protects the climber on routes that don’t have permanently-affixed protection like pitons or bolts in the rock. But the level of difficulty brings right along with it an increase in the potential for experiencing an epic.
In climbing nomenclature, an epic is a slang word that means a grand adventure – one that usually entails more time, effort, and inclement weather than anticipated or, again, desired. I can think of at least a dozen climbs for which such parameters were reached. They’re burned into my memory. And although I hope I’ve outgrown this trait on the mountain – I’ve certainly not outgrown it on this blog – I used to be pretty adept at making what the guide book said ought to be a six hour summit into a twelve hour one.

While I don’t wish for inclement weather on a climb, the ones that are etched deepest into my mind are those in which we cautiously down-climbed through thick billows of cloud and stinging rain under dripping wet ponchos or trudged through deep snow in an ‘always winter, never Christmas’, Narnian landscape. Those which my late professor and climbing partner Louis Cicotello would say involved just a bit of ‘the sublime’. 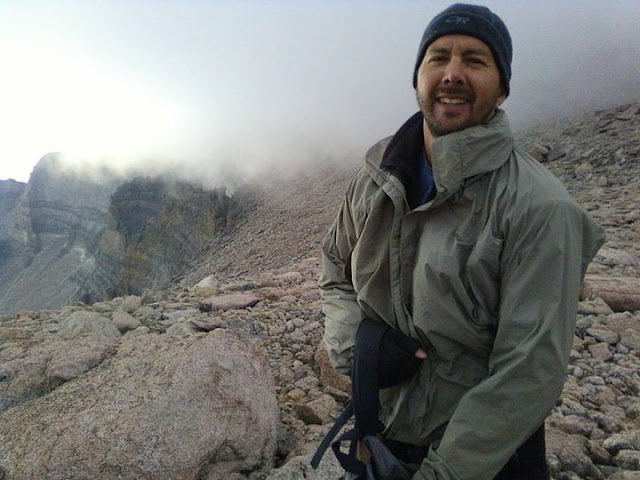 To date, my personal art journey has resembled one particular climb Louis and I did in which, as the lead climber, I nearly immediately lost the proscribed route and we went on a rather extended detour, roped together, high on the technical, Ellingwood Arete side of the Crestone Needle, one of Colorado’s more difficult fourteeners, on a blustery day. (So windy that, as we were climbing, we could see our tent, far below, blow free of its moorings in the stout wind and tumble about in the bushes.) 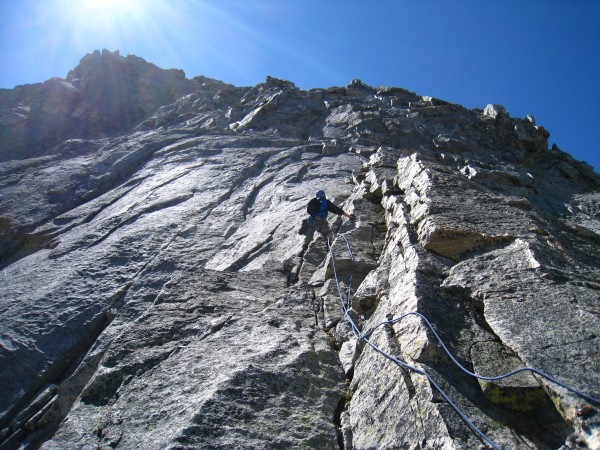 Looking back at some epic climbs like the one Louis and I had on the Ellingwood Arete,

And I think that’s what you and I deeply desire for our lives. To be able to look back, like Roy Beatty, and recall a life full of specific memories of contending, of grappling with something epic. Something beautiful. A worthy cause. One requiring our all. A “lifestyle of risk“. A life not simply sailed through, like on a recent vacation when our ferry slowly sailed through a thick, pea soup fog. Nothing particularly distinguishable. We don’t want to come to the end of our life and say, as Marlin Brando yearningly did as Terry Malloy, in On the Waterfront, “I coulda been a contenda…“

We want memories of having entered the arena, not of having sat in the audience, however much we might desire, when in the middle of an epic climb, to be instantaneously de-materialized and re-materialized onto the couch, eating a large cheeseburger and fries, while  watching Frodo as he has his epic adventure in The Fellowship of the Ring. Make that two large hamburgers. And a chocolate shake.

No, we want to be able to echo Roy Batty’s monologue. Want to have seen things people wouldn’t believe.

Only, I don’t believe that any of those moments will be lost in time or eternity.