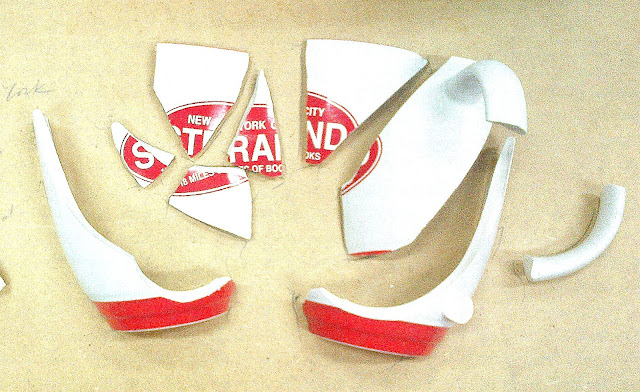 In my last post, The Wind Speaks Greek, I make passing reference to an event five years, three months, and nine days ago that both occurred and occurred to me. That is, being both unheralded and just about as inconsequential as events come, the moment nearly passed me by and perhaps would have, had it not occurred to me in short order that there was a connection between a conversation I’d had with a student the day prior and the broken shards I’d just swept into the trash can – a conversation involving the same book store in New York whose logo was on the mug I’d just knocked over.
The shattering of an earthenware mug has never, in my recollection, risen to the level of an earth shattering event in the history of the world. On the other hand, isn’t that just how big things typically start or end? The tossed cigarette that destroys hundreds of homes, et cetera?
Besides, I’m not talking about world history today in the macro, all caps sense, but about my history. Mine and perhaps yours as well. All of which, of course, must in some way, noted or not, affect World History.
To borrow a phrase from James Taylor, today’s post begins to regard one of those signs that might be omens. Or, to borrow another from James Surls yet again, an indication that perhaps, just perhaps, the wind speaks Greek.
Before diving in over the next few posts, here, in advance, is one of my takeaways, and the one I’d ask you to consider as well. How many such moments might be passing you and me by, perhaps because we’re too preoccupied with other, larger, louder, yet perhaps ultimately inconsequential things? How many events which don’t rise to the level of earth-shattering are passed like the pages of a book we’re only half interested in reading? Let’s get on with it! Let’s get to the good stuff! The important stuff. Why did the writer put all this filler in here?

I don’t know. Maybe, like Victor Hugo, he was being paid by the word.