“Balloon Man Running”, 2008, polychrome wood. Artist: Sean O’Meallie. Photo courtesy the artist
Today, a reprise of a post originally written in 2013 which, along with the memory of the first set build project I was handed back in 1998 (mentioned in yesterday’s post), recounts a business meeting I had soon thereafter with effects that continue to ripple out and out to this day.

In 1999, I got a call from a local agency that created welcome center and museum environments and the like. They’d somehow found out about me word-of-mouth just weeks into my fledgling fabrication shop business, and asked if I’d meet with them about possibly working together. I was all to happy to meet, though I had some concerns.

They asked me to bring examples of my prior work, and therein lay the rub: I was only three projects into my new venture, and had perhaps six or so rather poor photos to show. Green in business as I was, the prospect of such a make-or-break encounter made me just a bit nervous, and oddly, when I get nervous, I get goofy. If I’m smart, which is often the exception rather than the rule, I’ll first try my poor comedic routine out on my wife in the privacy of our own home. I recall my feelings of inadequacy the night prior to the meeting, and asked her what she thought of me delivering the following tongue-in-cheek line the next day: “What I lack in experience, you’ll gain in inexperience!” Thankfully, she talked me off that ledge, and I didn’t try to augment my insubstantial portfolio with an odd comedic act. Next day, in the meeting, after viewing the photos of my work and describing the scale of the projects they usually worked on, one of the execs said they had something they’d like me to take a look at. My restraint worked! A project!

In comparison with the scale of the work they had just shown me, my three prior projects were drops in the bucket, and immediately, a cash register began cha-ching in my head, however, I knew I wasn’t about to be handed anything way out of my league, like fabricating an entire museum interior. No, I thought they’d probably start me out with something in the $5,000 – $10,000 range – for them, a small component of one of their projects but for me and my hungry and growing brood, a feast, at least until the next unscheduled famine.

As I wisely sat on my hands to keep from doing a drum roll on the large conference table, the exec then leaned over and grabbed something from the floor at his feet, and then handed it to me: a 5″ dia. hard shelled soccer ball, completely white. There was a coiled phone cord coming out of one end and some little holes on the other. I was told that one of their vendors had embedded a speaker in the ball, and that it was part of a multimedia sporting display said sub was fabricating. Was I interested in taking the ball back to my shop and painting various of its pentagonal faces black and red?

Internally, there was the sound of a record needle scratching while the flag of enthusiasm which had been wildly snapping in a stout wind of anticipation immediately flopped down, lifeless. However disappointed I felt, I fought the urge to betray any sign of disappointment, and replied as cheerily as I could muster that I would love to.

I was then asked what I’d charge. Again, something told me to be careful; this was only a test. A test?

I looked at the ball. Ok, so, quick – what to charge? I calculated the time it would take me to meticulously paint the ball – a few hours at a minimum – but realized that there was no way I could let the corresponding amount of money escape my lips. Yet if I said I’d do it for significantly less than my time was worth, I’d project that I’d do anything short of selling my children for work. And that would be inaccurate – for the right price, I would sell them. We could always make more, and did.

Times like that, I find it helps to have cultivated an internal conversation with a voice of wisdom – the one that argues against all the foolish or unhealthy things we entertain – like whether we should sell one’s progeny. And not just a conversation, either, but a history of aligning our actions with it. Without the determined cultivation of said history, it can be hard recognize the voice or follow its bidding.

Thankfully, although I hadn’t calculated my day rate or the corresponding hourly rate at the time, in the span of perhaps five seconds, I settled on an amount that, while not eliciting any internal spasms of rapture, I felt would be palatable to the other party – $50. It was, and we shook hands, parted, and I spent the rest of the day with a filbert brush in hand, carefully painting the small sphere at my dining room table while listening to a book on tape entitled Get Top Dollar for Your Progeny.

Returning with the newly embellished ball the following day, and after a cursory examination, glance at each other, and a nod, one of the execs turned to me and said, “So, we have another project we’d like you to take a look at,” proceeding to describe a project that involved working on a comparatively much larger spherical shape: a four-foot diameter rotating globe display for a welcome center they were designing. Was I interested?

Let’s just say I was able to fatten up my children for a few more months, critical for getting top dollar.

More to the point of today’s post. Just as the soccer ball trial project had been, the much larger globe display project itself was a kind of trial balloon that led to larger projects for the ad agency. It also led to other clients and larger projects, ones that eventually led to the position I held for a decade at the Colorado College (another opportunity delivered via word-of-mouth, this time, Sean O’Meallie’s, the renowned artist whose work bookends this post), which led to my making a return, after around 23 years of shelving the practice, to art, eight years ago, which has led to so many other opportunities both in my life and others’. Why, it’s a veritable example of the butterfly effect.

Am I saying that every opportunity that has appeared at my door since the fateful moment I was “floated a trial balloon”, not to mention didn’t deliver any unhelpful comedic lines (though it would have been hilarious to me at least), hinged on that one brief moment? No. Man, how scary would that be? Thankfully, one is typically given plenty of chances to make wise decisions in life. Course corrections. Opportunities to chart another course. What I will say is that I agree with Rodgers, Hammerstein, and Parmenides:

Nothing comes from nothing; nothing ever could.

And as we all know, it’s not simply those pivotal times in one’s youth or childhood, critical as they can be, that we encounter trial balloons in life. They float across our path at every age, and much more often than one might think – in school, in our careers, in our relationships at work and personally. In seemingly chance encounters.

Look around you – do you see any trial balloons? Don’t expect them to be very obvious. Did you check under the table? In my experience, they’re pretty nondescript, usually no more than, oh, about 5″ in dia. if they’re visible at all. And usually they aren’t. Usually all you get is a quiet, calm, yet, if we’re keyed into it, an insistent voice of wisdom.

The latter component is key. Without cultivating an ongoing relationship with the voice of wisdom, my automatic ‘bent’ is to blow it – to “blow the balloon” – to fail the test, whether pass-fail or grading on a curve. So I suppose I’m writing this down less for you than for me – thanks for obliging. You know, I ought to tattoo it, in reverse, on my forehead.

Mmm… something tells me that wouldn’t be wise.

Don’t blow the balloons and realize that they’re more way common (and hard to see) than you think. Remember, the ones that they might lead to could be orders-of-magnitude larger. 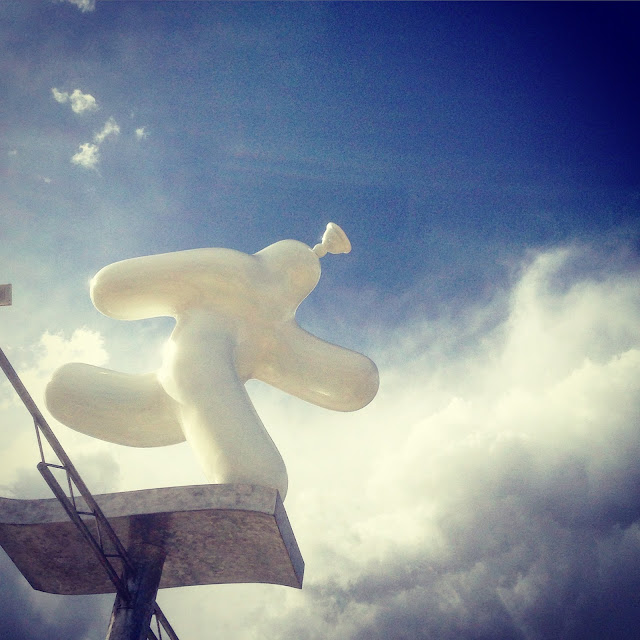