Dog and Cat Days of Summer 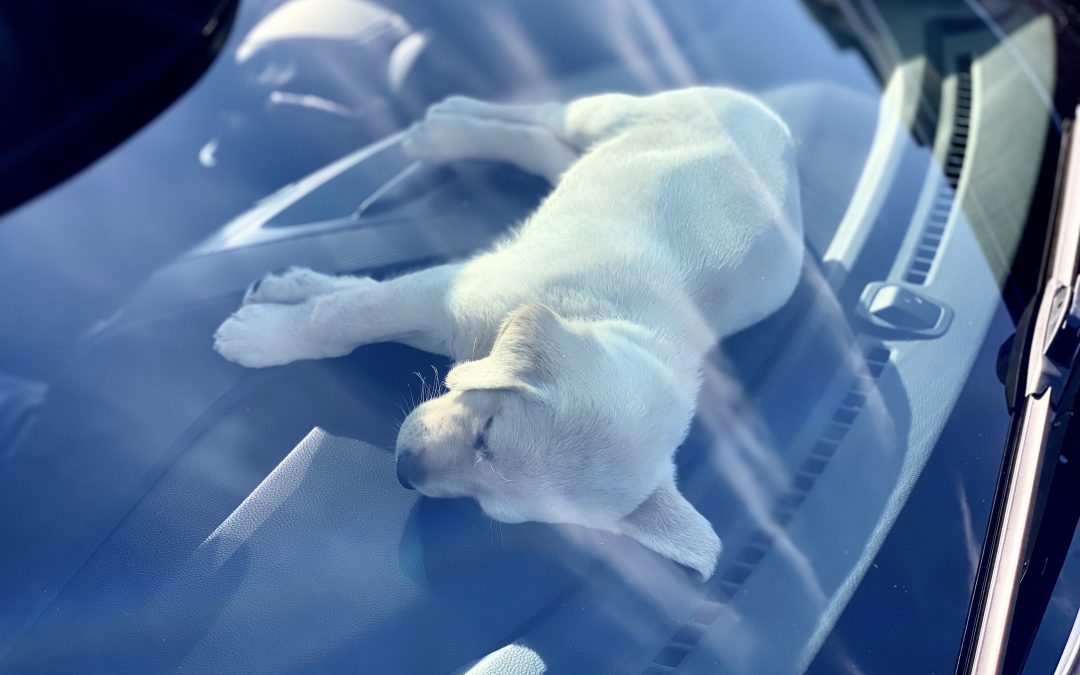 The dog days of summer have arrived. Hot, generally dry days in our neck of the woods, yes, but also, we’ve a new yellow lab puppy, a pretty female we’ve named Harper. For my wife, Nan, and me, and nearly everyone who has come in contact with Harper, it’s been love at first sight.

Not so much for our seven year old Golden/Newfie female, Ruby, who is finally just beginning to tolerate the tiny intruder. Harper’s around nine weeks old and weighs around ten lbs, hence, she currently enjoys lap dog status. That could be one reason why 75 lb Ruby isn’t fond of puppies; jealous. If Ruby’s behavior toward our kids’ two chocolate labs last year – initially similarly intolerant, then tolerant, but eventually excited whenever she hears their names and seemingly bored and disinterested in life when they are away – it won’t be long before Ruby and Harper will be fast friends. That’s the hope, anyway. Already, Ruby doesn’t mind when Harper comes and lies down up against her, which, when the same was attempted a few weeks ago, elicited a vicious and sharp rebuke from the “elder statesdog”, though thankfully not skin-breakingly so. 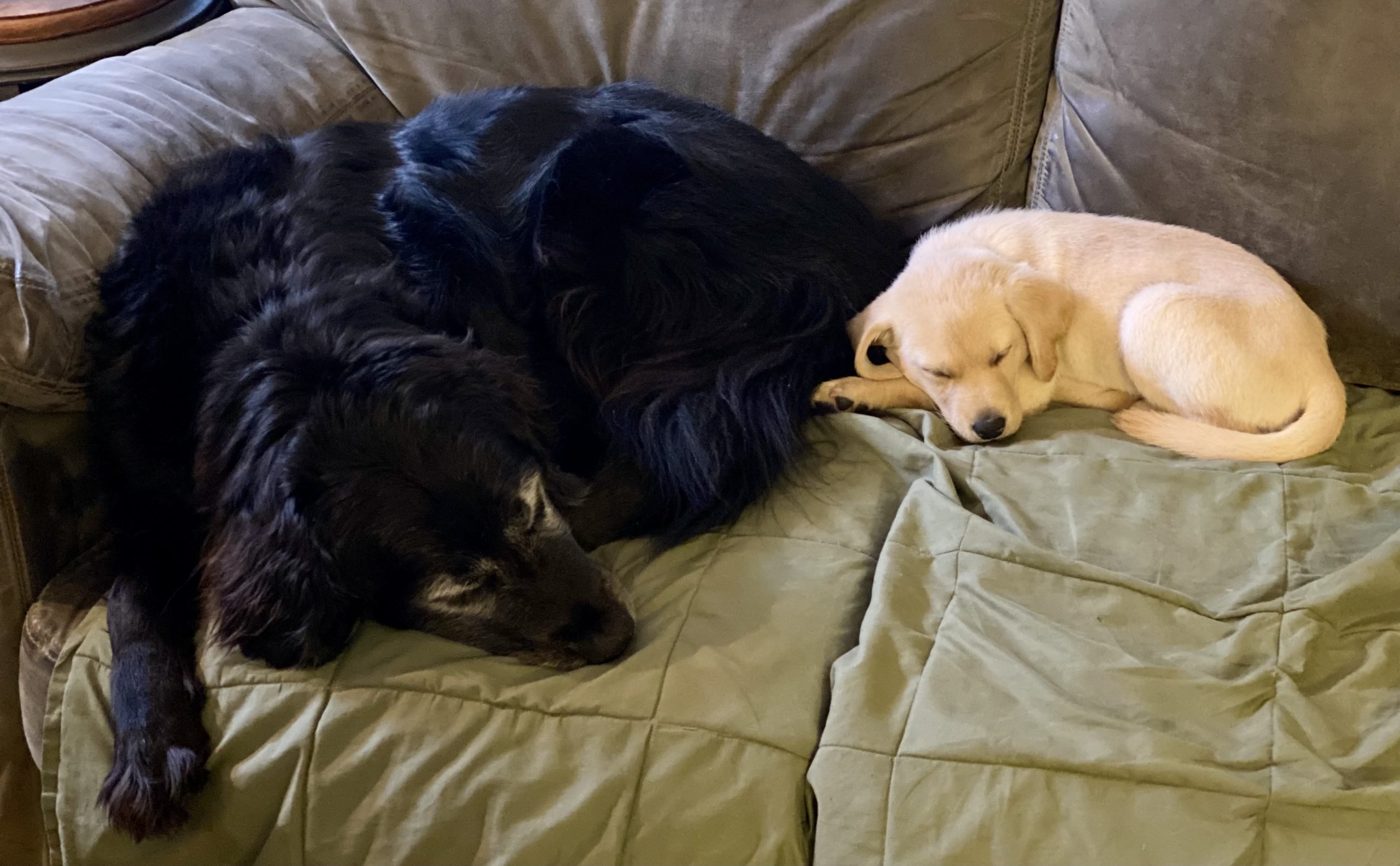 Harper’s also learning she can’t employ her sharp little puppy teeth on flesh and furniture the same way she’s allowed to with her toys.

It’s one of the dog “pros” in the canine vs cat debate. At least with this breed, the boundaries are learned and conformed to remarkably quickly. I never grew up with or have owned a cat, but from what I’ve been told, in general, they do what they want, and if they desire to turn your home into Scratch Post Disneyland, and they have the means, they will. At least, that’s what my former professor, Dawn Wilde, found with hers. I asked her, a few years ago, why she didn’t have them declawed, and she said that the practice can cause trauma and unintended negative side effects (like turning clawers into biters) and is one generally looked down on by veterinarians these days. Makes sense. I’d probably be surly and want to lash out and bite people if my fingernails were removed as well.

Recently, Nan and I brought Harper up to Steamboat Springs, Colorado, to visit Dawn, one of my favorite college art professors. The drive there from Colorado Springs takes around four hours, but even having made the round trip at least ten times by now, I don’t mind the extended time behind the wheel, as it entails winding through some of the most gorgeous high country Colorado has to offer. And, of course, primarily to see Dawn. This last visit, I was also able to introduce Nan to Dawn’s good friends Pat Walsh and her husband, Tom. Pat and Susan Schiesser, both, like Dawn, artists, ran the Red West Contemporary Gallery in the center of Steamboat, and I was grateful to show some of my work there. Sadly, Susan passed away much too soon on October 20, 2020. She was a vibrant, energetic, talented, and irrepressible woman, and is missed by all who knew her.

It’s been a while since I’ve mentioned Dawn on my blog, but she’s the kind of wonderful, intelligent, beautiful, graceful person who makes one want to stand up straighter, as it were; to be a better version of oneself. Not because she demands that of you in any overtly discernible way. I’ve never felt like she’s been disappointed in me, though I’m sure I’ve given her plenty of reasons to be. No, more because you sense that her natural refinement and keen perception of all things societal, political, and personal cuts deeper than most people’s. Kind of like her cats’ claws – seemingly no “surface” is missed. 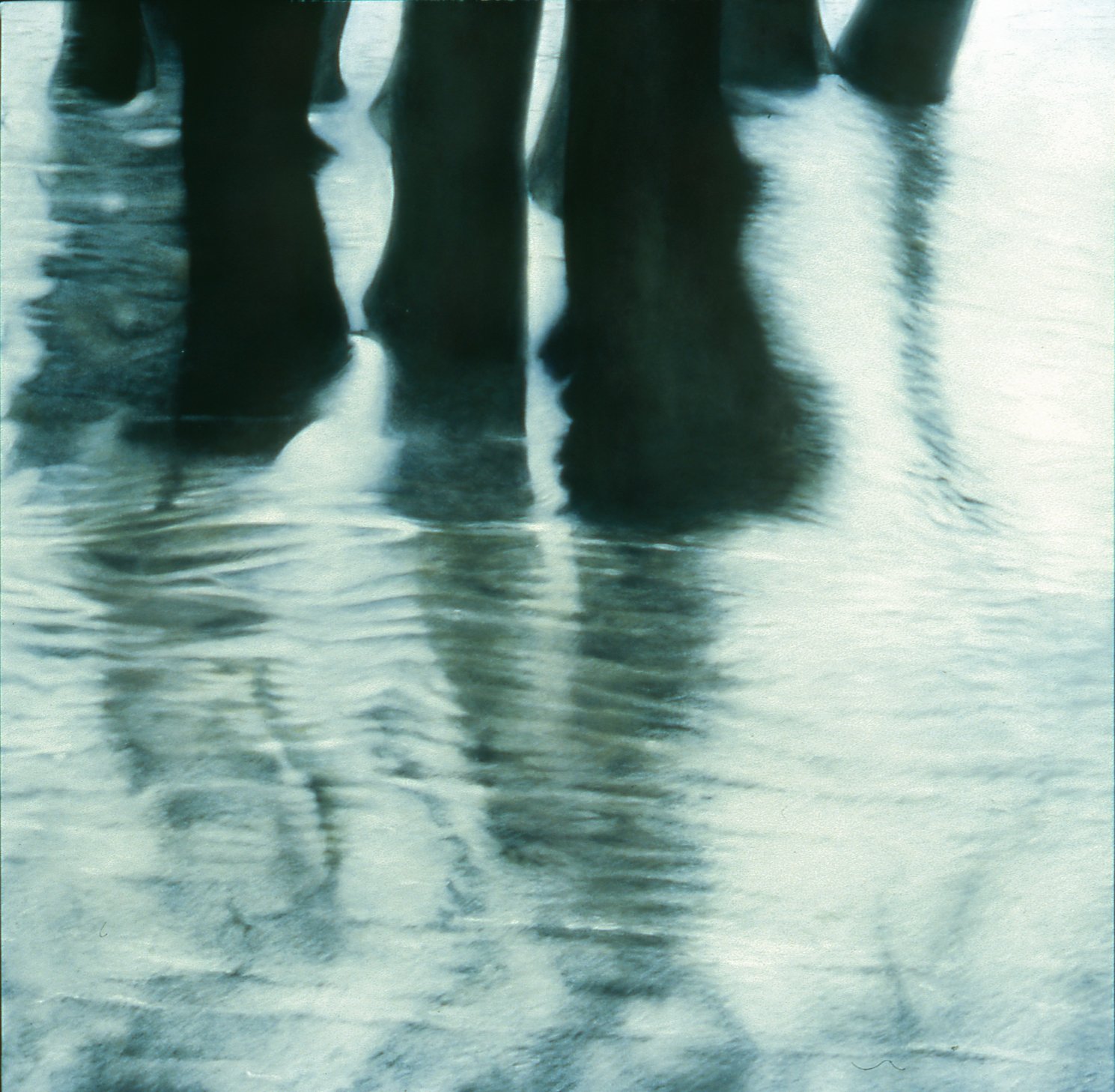 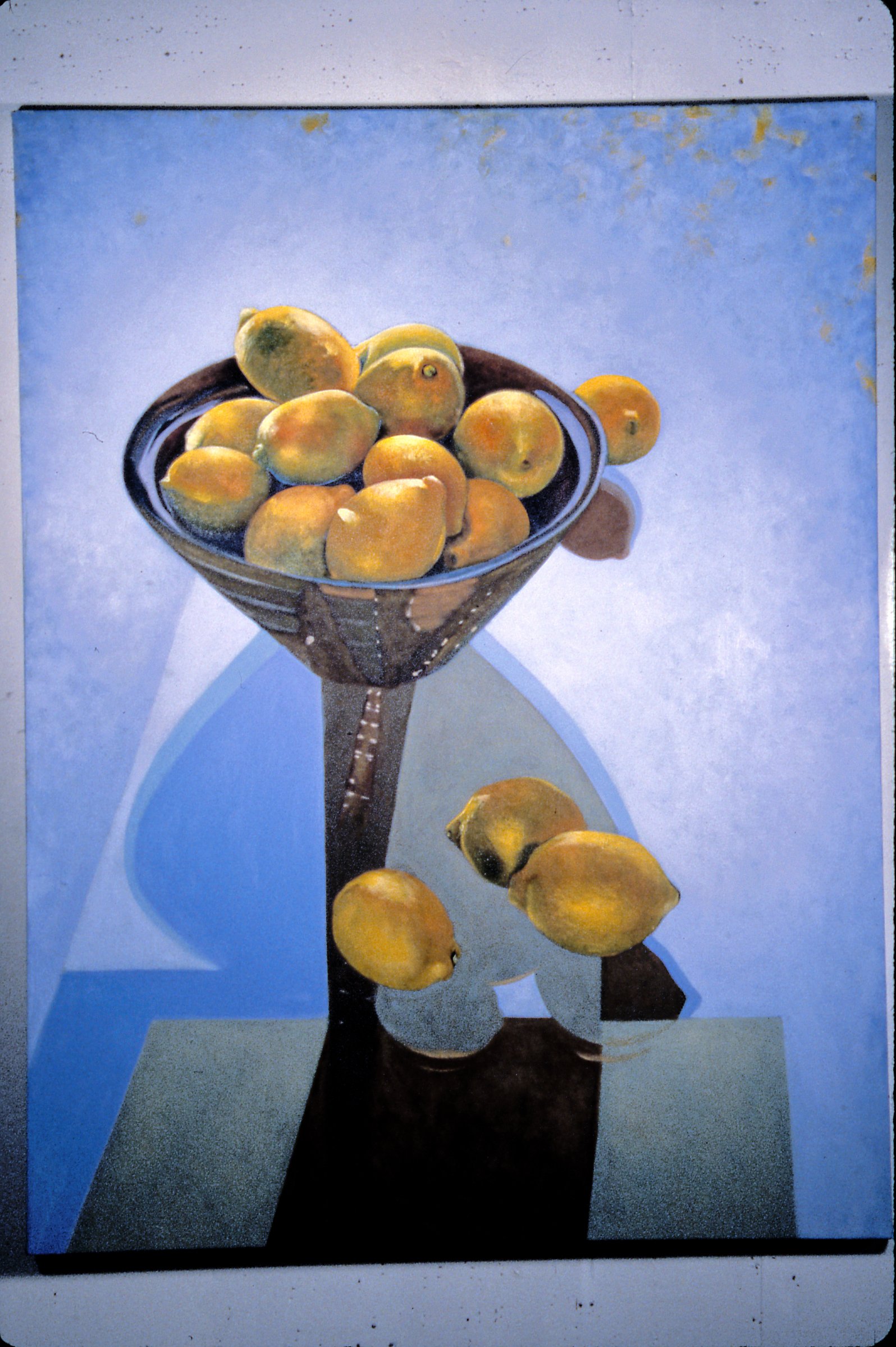 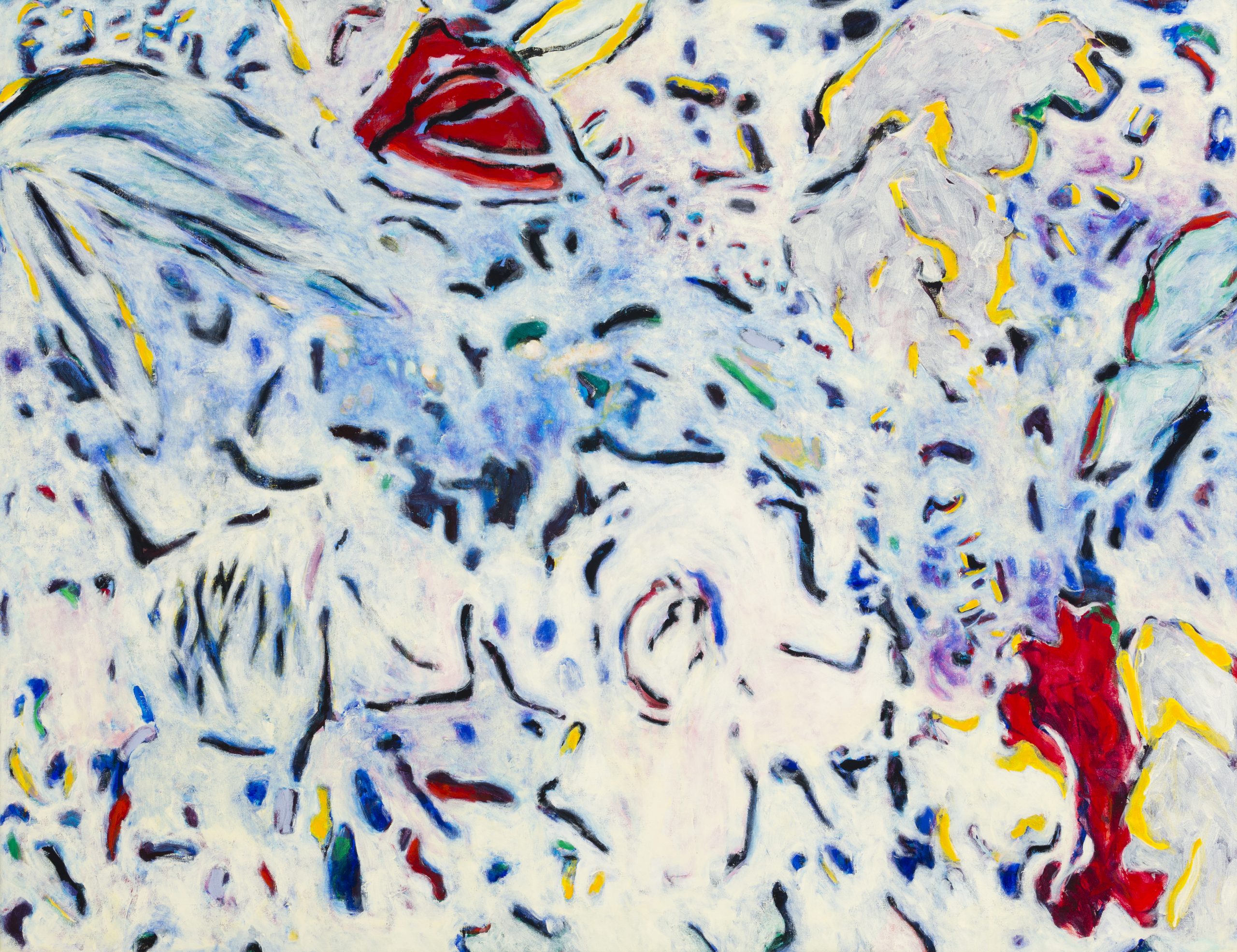 This keenness of Dawn’s infuses her artwork. She is comfortable working quite large as well as intimately small, primarily in oils, but in a variety of other media as well. Stylistically, she has worked from more expressionistic, loose mark-making that, along with Floyd Tunson’s and Julia Lathrop’s (and Louis Cicotello’s, Chuck Close’s, Susan Rothenberg’s, Jim Dine’s, etc., etc.), heavily influenced the love of the same in my own, to, at times, nearly photo-realistically-tight brush and pencil work. Those times, her intent seems to be to closely capture the essential physical nature of of the subject matter, often made somewhat abstract due to closely cropping the view. Other times, she takes just enough of the subject’s color and form to allow the viewer to comprehend what it is they’re looking at while jazzing the surface and color up in a kind of poetic un-realism that pushes and pulls the boundary between what’s “real” and what’s “abstract” (an inexhaustible subject that would, and has, filled volumes of books and goes well beyond the purview of this post) as well as, at times, overlaying the subject with a sort of metaphoric lens or mirror. She works from life but hasn’t avoided working from photos, be they of a patch of rippling pond water – in part, surface, in part, the pond bed, and in part, reflection of the sky above – a family photo from yesteryear, or reference photos from some of the trips she’s taken to foreign lands. Her work ranges from flat-footedly “about” pattern to having an almost fearfully dark and mysterious presence (the shadowy, perhaps figurative China paintings).

Even beyond the marksmanship, it’s Dawn’s expert use of color that “drives” her work, and again, I think, as I hope we all can of this person or that, of how the “colors” in my life would be just a bit flatter had Dawn never been a part of it. Had she chosen to live in any of the major art centers, I have no doubt she would be as much of a household name in the art world as any. Instead, she and her late husband, Brad, made their home for many years in and near Colorado Springs, and I’m so glad they did, for selfish reasons. Her influence in my life and my work mirrors that of hers in relation to so many others: she’s heightened the color of our lives.

I can see Dawn frown and shake her head at my directing my gaze her direction like this. She’s never been one to self-promote, at least not the way I feel I do, at times; too much. All I’ll say in response is that I “hid” all this Dawn talk in a post purportedly about puppies and cats. And that you can’t always get what you want.

For instance, Nan and I yearned to stay with Dawn and Pat and Tom longer, but alas, it was after six pm and the four hour drive home was calling. Just before we left her, Dawn showed us something she’s called a “Pandemic Box”, a legal sized, lidded storage box containing dozens of watercolors matched with her thoughts. Work she did from home during the long, solitary Covid months, primarily. Yet, she wouldn’t let us look at much, dismissing the work as pedestrian. Denigrating her own work in a way she wouldn’t have allowed her students to, with theirs, back in the day! Tisk tisk. But what she did show showed the same qualities her larger work does, her home does, her life does.

Something else, too. Like anyone who has lived a full life, she has, as we all do over time, experienced loss. Loss of loved ones, loss of physical vitality. And as I said, Dawn also thinks deeply about the state of the country and the world, of the seemingly endless array of unresolved issues great and small. So her work is, to me, often similarly infused with a yearning for beauty to overwhelm sadness, loss, pain, ugliness. Perhaps that’s the reason for the pattern, the color, the attention to surface detail as well as the depth. She doesn’t shy away from a focus on beauty, and I can hear her laughingly dismiss as ridiculous the contemporary art world’s aversion (though it’s getting better), to all things beautiful, rational, orderly, good.

Qualities anyone who knows Dawn would concur she has added to their lives. Qualities she imbues everything she touches, though at least one former student wishes more had rubbed off on him. 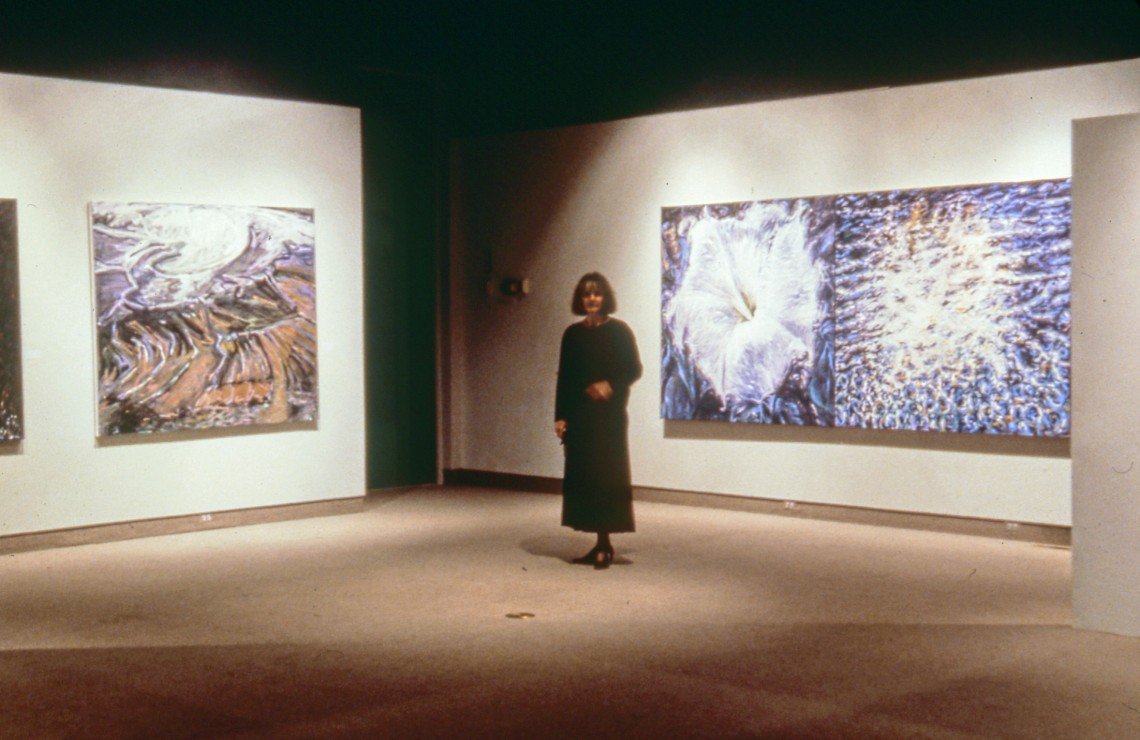 Qualities I bet she wishes her cats, as well, though beautiful, also had.