Notably absent from artist David Kimball Anderson’s custom shaped Donald Takayama surfboard is a leash plug. He learned the sport sans leash, which, if he ever chose to employ one, would keep the board close at hand after a spill. In his late 60’s, however, Anderson has no plans to alter his long held free-riding purist’s stance, which is part and parcel with his life’s philosophy.

When I met David, he had a healthy tan, hair seemingly saltwater-bleached white, and wore a different t-shirt emblazoned with various surfing logos just about each day of the two week bronze casting course he co-taught with Tai Pomera in June, 2008, at the Anderson Ranch Arts Center in Snowmass, Colorado. Prior to the class, the first I’d taken at the ranch, I wondered if my Santa Cruz, California-based instructor with a surname matching the center’s was perhaps connected to it in some way. However, despite being a frequent contributor to the sculpture department’s summer workshop fare at the ranch – his next lost wax casting class is scheduled for August – Anderson isn’t any more linked to the center than he is, well, with his surfboard.

For today’s post, Anderson sent me photos of his two studios; one, an office/drawing cottage on his property, and the other, a few blocks away, where he makes sculpture; fabricating metals, fiberglass and wood. I’ve augmented what he obligingly provided with a few photos of my own from the ’08 bronze casting class.

But first, some images of his lovely work.

Anderson and his wife, the writer Lis Bensley, grow vegetables and fruits outside their Santa Cruz home, and the photo below shows David’s office/drawing cottage on their property behind a budding apple tree, on a rainy spring day. 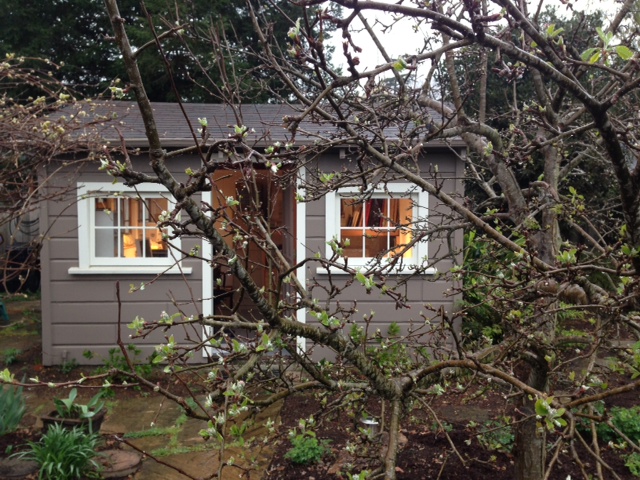 The next two show the cottage’s interior. 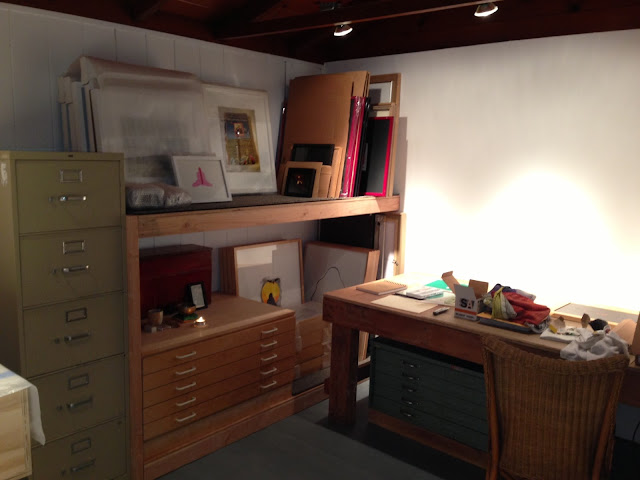 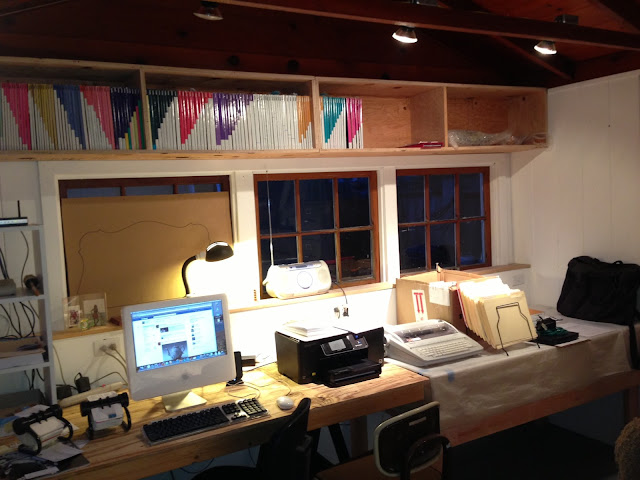 Hmm… awfully tidy. The photos got me wondering where Anderson would rank himself on my peculiar, esoteric organizational “Knoll/Bacon scale” (see this link for an explanation). He says it depends – if he has work ready to go to an exhibition, his studio looks like a storage unit. But normally, though he’s on the more organized side of the spectrum, he says he’s no Knoller. He adds, “My wife would call me an obsessive Knoller, however.” 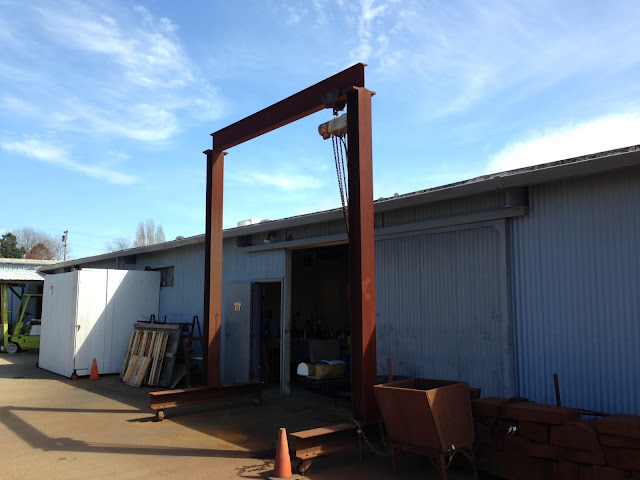 The photo above shows Anderson’s massive hoist for lifting heavy steel and other materials on and off of supply vehicles, but also, at times, an overkill of a bird perch, literally: He writes, “Several weeks ago a Red Shouldered Hawk was eating a snake while sitting atop my hoist outside the studio door as I drove up in my truck.”
The next two photos are long shots taken from either end of the fabrication studio’s interior. 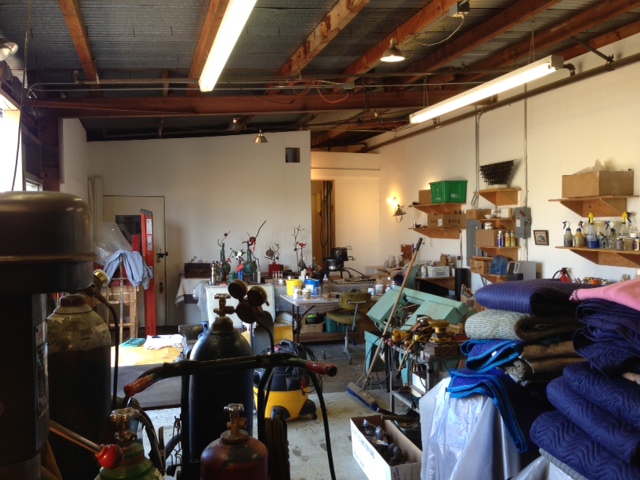 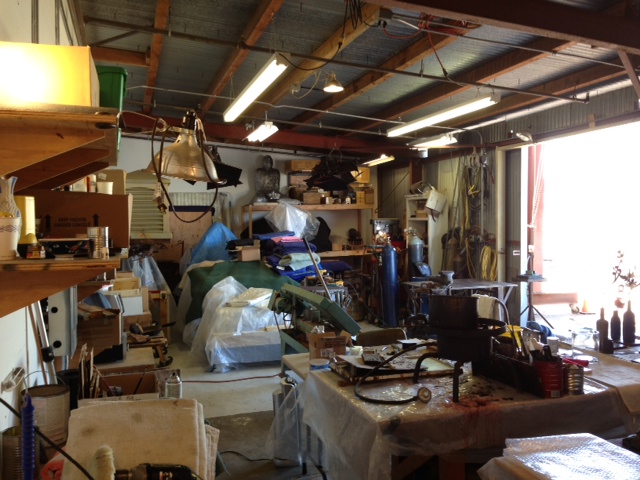 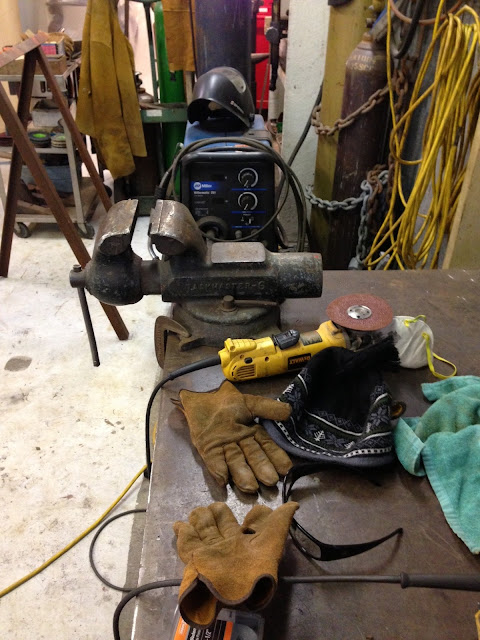 The photo above is of Anderson’s work table, outfitted with a vintage Taskmaster 6 swivel bench vise.
Below is a view of a wall shelf with a model railroad trestle he uses as an antenna for his shop radio, and a close up of a framed Box Tops handbill. 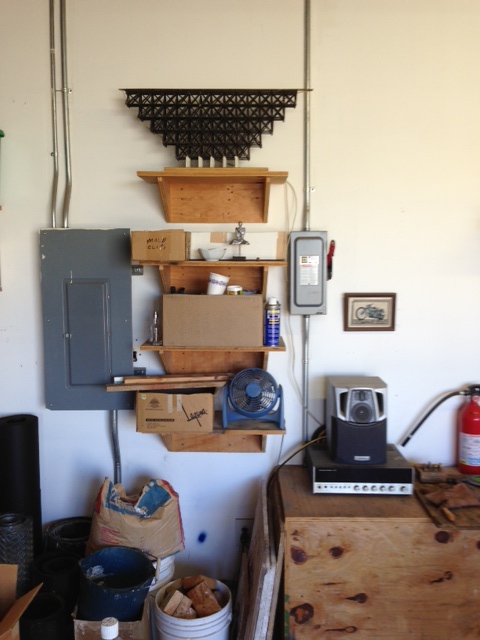 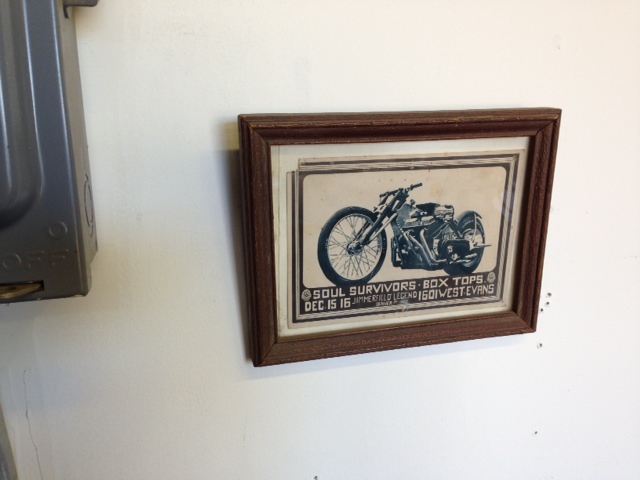 Finally, the following few photos were taken during the June, 2008 Anderson Ranch bronze casting class mentioned at the start of this post. 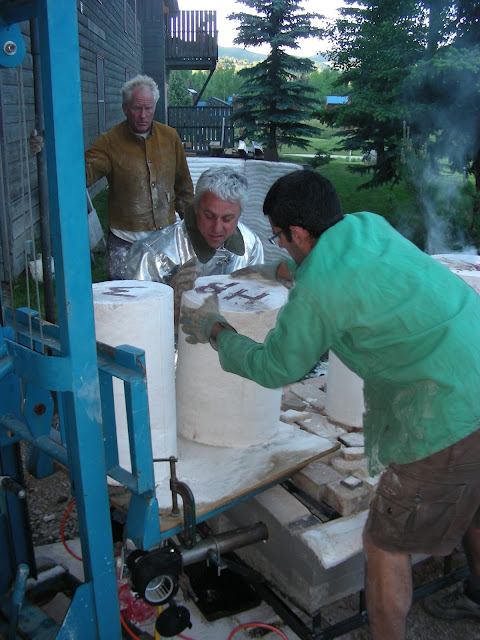 Above, co-instructor Tai Pomara (center) and Sculpture Studio Coordinator Jason Speich (right) load a rolling lift with the students’ heavy investment molds from the shop-built kiln once they’re cool enough to handle with gloves, while David oversees. (The kiln’s roof and four walls are removable, allowing an easier load/unload). 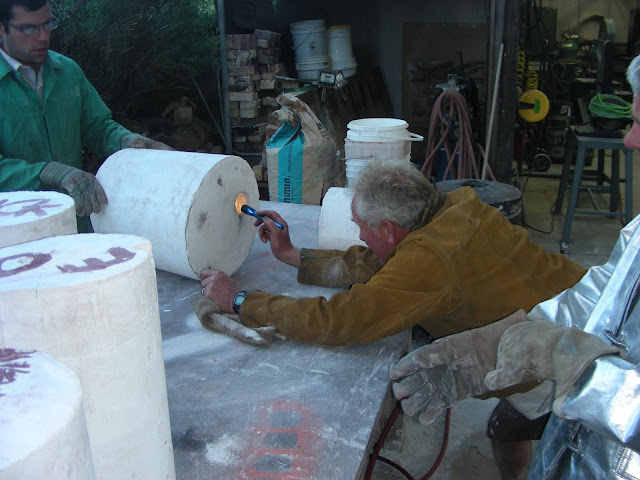 After burning off the wax inside the investment molds and allowing the molds to cool further, David checks one for any remaining material which might cause issues when the molten bronze is introduced, while Jason and Tai assist. If he finds any, he’ll carefully blast compressed air into the pour cup and often the material – charred wood, say, will shoot out the vent hole. 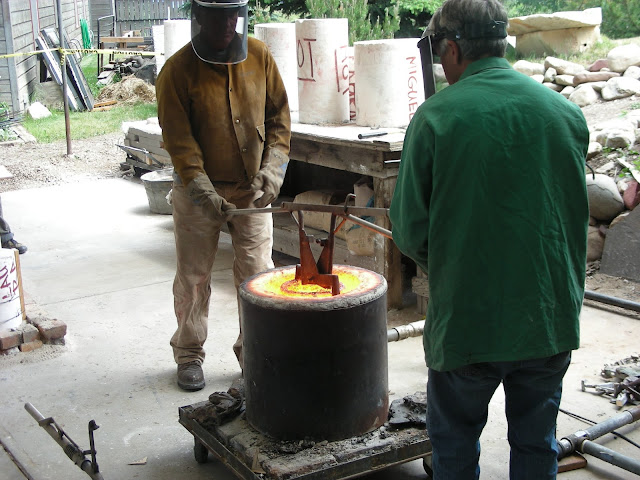 David and Tai prepare for the bronze pour, pulling a small lift-out crucible from a portable furnace, where it has reached a temperature of 2,020 degrees fahrenheit, and then been allowed to cool to a ‘mere’ 1,950 for pouring. 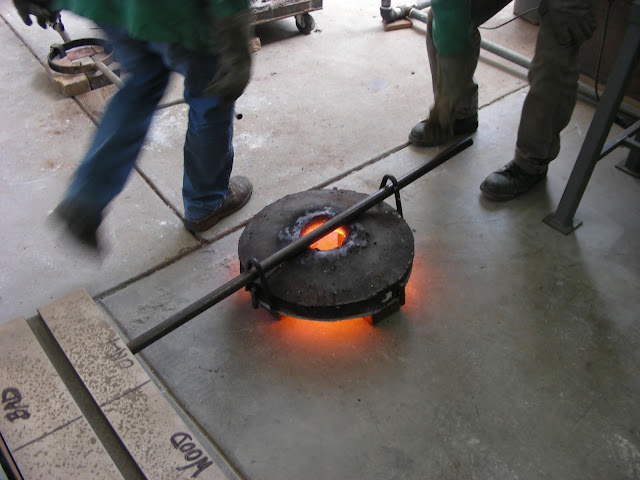 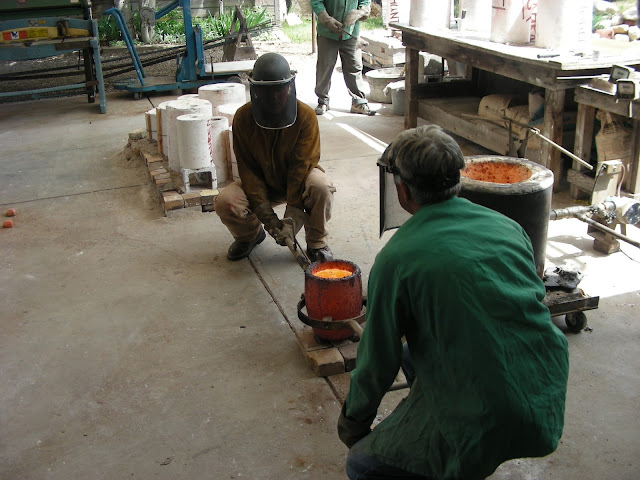 David and Tai carefully lifting the crucible after skimming off the slag. 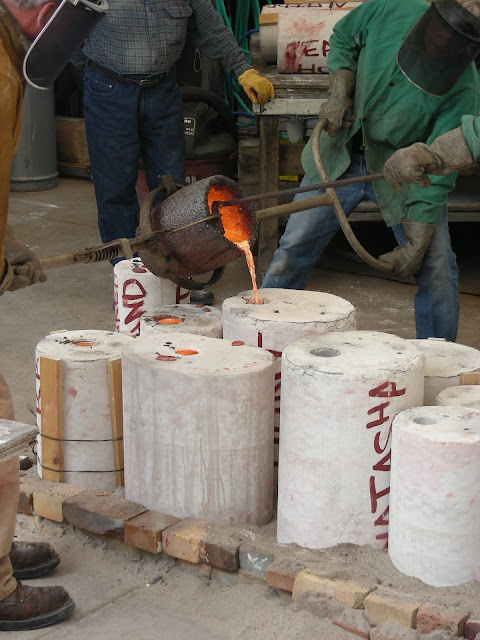 The liquid bronze is carefully poured into each mold, filling the complex system of gates and vents and pushing out all of the air until it begins to exit a vent at the top. 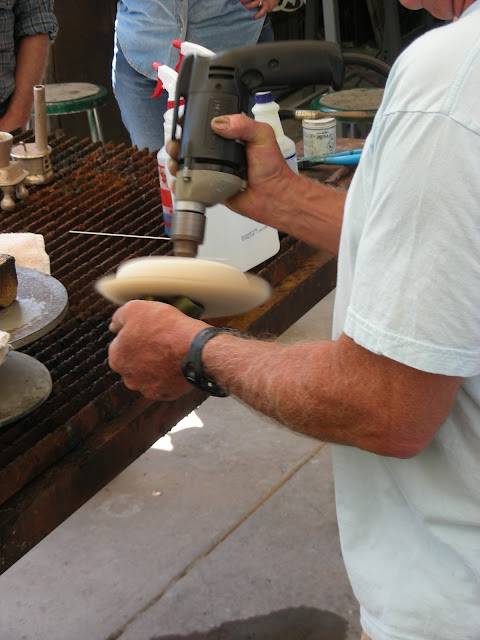 After the pour and a day or two of “chasing”, or removing the extraneous parts from the fully cooled bronze sculptures, David demo’s, above and below, how to finish and apply patinas to one’s work. 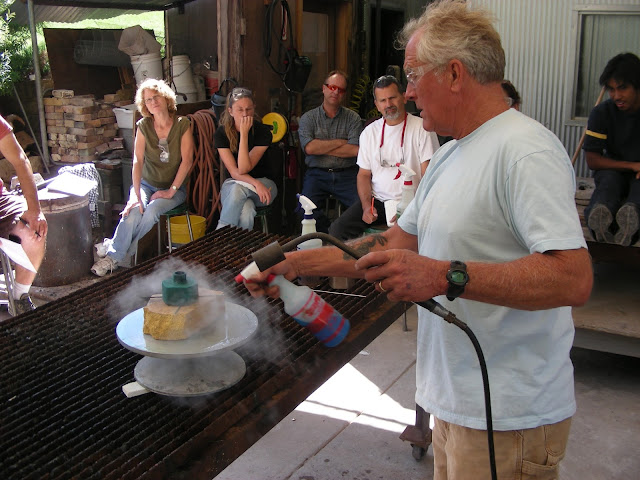 I’m stoked (surfing lingo) that DKA allowed us to poke around his studios and talk a bit about what he’s up to. More of Anderson’s work may be viewed on his website, which, shall I say, I have ‘ankle leashed’ to this post here: