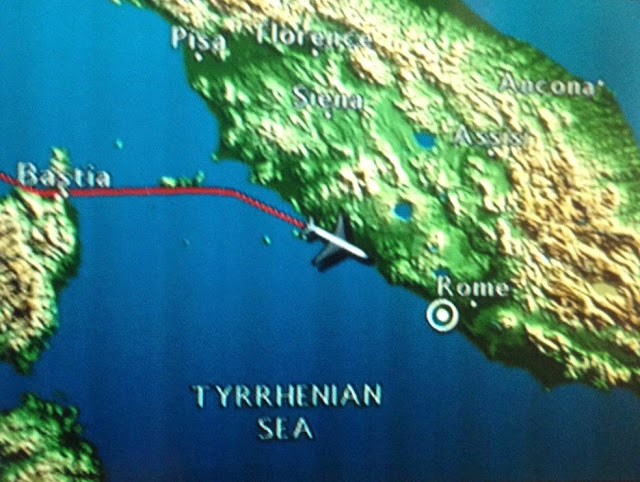 Recently, I watched a film about our planet’s two polar regions with some amazing footage.

In one scene, two heavy male muskox went head to head, colliding over and over again at thirty miles an hour with each other in a battle of dominance that often leads to death for one and mating rights for the other. The sight and sound of the violent collisions which would total a car continue to echo in my mind.

In life, there are bad collisions – planes, trains, and automobiles – and good ones, such as at the intersection of your life and a good message.

As mentioned in my last post, the researcher, author, and speaker Brené Brown gave a talk to a conference of creatives entitled Why Your Critics Aren’t The Ones Who Count over three years ago. I’ve watched it at least a half dozen times. My most recent viewing proceeded my resignation from a great (safe) job in order to be a (much riskier) full-time artist, and involved just such an internal collision. It’s clear to me now that during the entire period of radical change, the words Brené spoke in the talk were echoing around in my mind. I’d heard the message before, and agreed with it. But this time it felt like she was talking directly to me. Telling me that it was now or never. And yet, one of the key reasons for my “taking the leap” hadn’t appeared on my doorstep at the time of the viewing.

Speaking of taking leaps, permit a digression. In the documentary on the polar regions, there was also footage of arctic puffins learning to fly. It was both humorous and heart wrenching to view the youngsters who would sail down and away from their nests on the cliff face, aiming their glide for the nearby ocean, but misjudging their angle by a degree or two and smacking down onto the beach, bouncing like rubber balls before coming to a stop, seemingly unharmed – phew! Just yards from safety, one such bird then tries to make a run for it only to be easily scooped up by an arctic fox. Manna from heaven for the fox, as David Attenborough, the narrator, says. It can be a risky business, living on this planet.

In a blog post I wrote recently (entitled, wouldn’t you know it, Risky Business), I mentioned the Theodore Roosevelt “Man in the Arena” quote that Brown, in her talk to creatives, says made a huge, life-changing internal shift in her life and career. You’ll have to watch the video or read my post for the quote, but here’s a quote of my own from that post:

… But hey, shouldn’t taking risks be part and parcel of one’s life? Shouldn’t getting one’s work out there where the art world can pronounce judgment on it, like a Roman Emperor deciding the fate of a wounded gladiator by either displaying a thumb’s up (ironically, that meant death was desired) or a raised fist with thumb tucked in (like a sheathed sword, connoting mercy) – shouldn’t such potential jeopardy be viewed – weighed carefully and wisely – as a kind of magnetic north for one’s life compass?

I just recalled that on the very day I left my job and was seated on a jetliner pointing towards Italy, where I’d be volunteering with an NGO for a few weeks, one of my sculptures, Compass, was also in the air, flying to the home of its new owner in Texas. In fact, just as my plane was touching down outside of Rome, I got a text saying the piece had arrived. Timing. 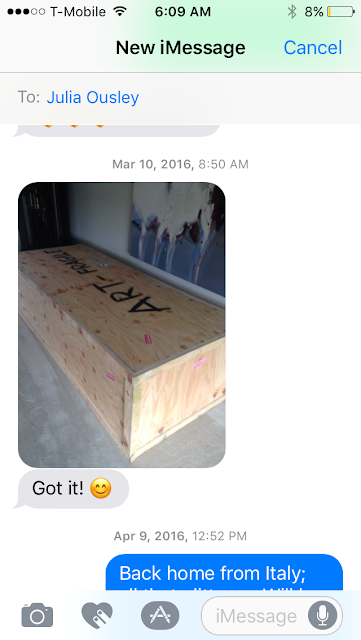 One thing Brené says in the talk is that one of the seats we should reserve for the critics that often hinder us from creating needs to be one we reserve for ourselves, because we’re really our biggest critics.

She doesn’t spend a lot of time unpacking this, but I know I’ve reserved a large amount of headspace for self criticism. For me it’s not so much “I think I can’t I think I can’t…” but thoughts I attribute to others. Things I assume others are saying about me or my work behind my back.

I like to think I’ve a finely developed sixth sense for such things. Like a seal that can sniff out a dead whale from miles and miles away, I have the ability to detect the thoughts of critics of my creative undertakings made from the privacy of their homes. I can see them roll their eyes whenever another one of my blog postings hits their Facebook or Instagram feeds, etc.

I’ve two things to say to myself in response to such thoughts. A) I should know by now that my so called “finely developed sixth sense” is often defective. It gives false readings. They say one definition for insanity is doing the same thing over and over and expecting different results. Same thing goes for the times I give carte blanche headspace over to such thoughts.

But more importantly is a truth Brené Brown underlines so well in her talk. B) says that yes, you will and do have critics. It comes with the territory.

After Brown read Roosevelt’s words, she said three things shifted within her. They’re all noteworthy, but the second one deserves to be quoted verbatim this morning. It could be my manifesto:

“I want to create. I want to make things that didn’t exist before I touched them. I want to show up and be seen in my work and in my life. And if you’re going to show up and be seen, there is only one guarantee, and that is: You will get your ass kicked. That is a guarantee. That is the only certainty you have. If you’re going to go in the arena and spend any time in there, especially if you’re committed to creating in your life, you’re going to get your ass kicked. So you have to decide, at that moment, I think for all of us, if courage is a value that we hold, this is a consequence. You can’t avoid it.”

For me, those words don’t instill fear. They expose it. Undress it, revealing that very often, the image doesn’t match the reality.

But even if it does – even if someone writes a scathing essay about your work, say – the question then becomes what are we going to do with the information? Is there something in it that we need to honestly evaluate?

Or is it simply a shot from the cheap seats? Is it more revealing of the critic’s own fear of entering the arena themselves? Many times, the most scathing verbal or written assaults are evidences of just such a reality.

But once again, as I begin wrap things up this morning, I want to underline that I’m my own best (read: worst) critic. In the studio, an artist’s or craftsperson’s ability to parse out the dross is what makes the quality of their work shine like gold. But that same ability to really evaluate your work is the one that can, if you let it, stop you from picking up the paintbrush in the first place. Or submit your work to that call for entries. Or pick up the phone to invite that person you really want to see your work for a studio visit. There’s no juncture in the journey where that chatty critic won’t willingly keep you company while secretly transferring the baggage he or she’s carrying to your own pack.

Lately, I’ve been looking squarely at this troubling tendency to allow my own thoughts to stop me in my tracks, creatively. These wolves nipping at my heels.

Last digression. In one scene of the arctic film, two wolves track a group of bison and eventually take one down – actually, it’s one particularly hungry female wolf, bloody and panting from her long, drawn out battle with the huge beast, that does most of the work. Really incredible.

Defeating all one’s detractors, real and imagined, will leave you and me similarly bruised and bloody. I hope to stop trying to find a way to create that defeats all my detractors, real or, in most cases, imagined, and begin to take a good look at where I want to go, evaluating it almost as if I were setting up a business plan. If I’m serious about reaching higher ground, it’s going to take concrete steps. It’s going to take a plan – a battle plan, if you will. And that plan knows the enemy’s tactics but doesn’t make a place for self criticism (or actual criticism of the potshot variety). Doesn’t say, “What? The enemy’s lining up for battle against us? Maybe we should just stay home.”

Will you and I be in a battle if we “enter the arena”? Absolutely. That’s why, other than staying light on my feet, I hope to be as thick skulled as a muskox. 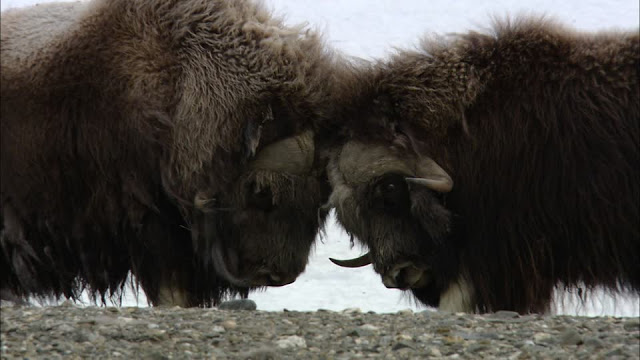