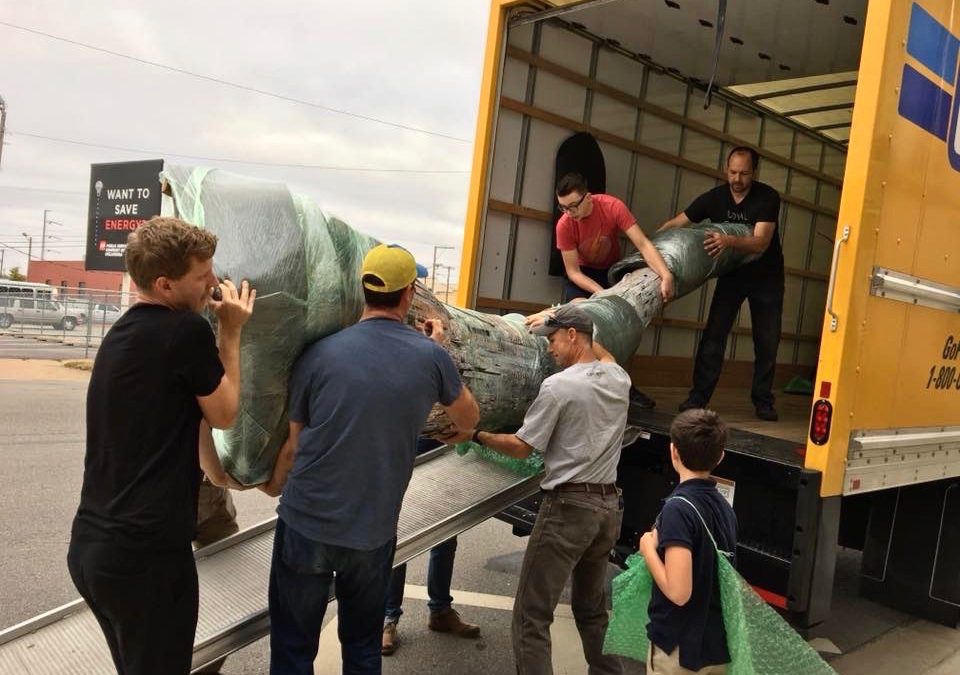 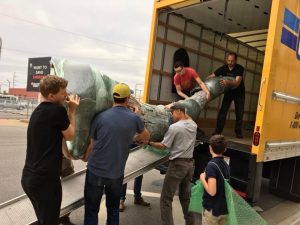 Scale is a topic that tends to come to the fore when people who’ve seen progress pics (@artstudiobuild on Instagram) online come to view my w.i.p. art studio in person, like artist and friend Dan Romano did yesterday, assisting me in installing some heavy I-beams. 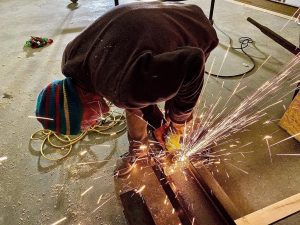 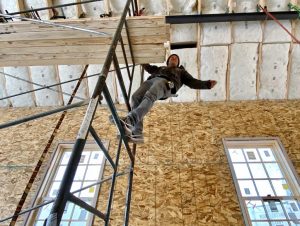 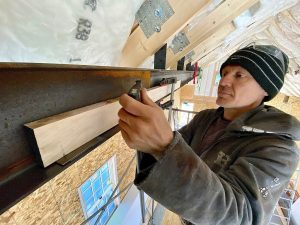 As well as the art I hope the increased height and square footage allows me to be able to create within the new space.

When I resumed making art in 2012 after a 23-year sabbatical of sorts, it was nearly universal: if not the first question, the second one I would be asked by those who viewed my sculptures in progress in person was, “Um… so where are these going to go?”
It was evidently assumed that I must have an intended home in mind for them, and I’m sure the work’s large scale was the basis for that.
For a number of months, when asked where the work was expected to go, I answered with a shrug of the shoulders and an “I’m not sure.”
It felt a bit like informing people that Nan and I have five kids. As with when you move beyond the cultural American norm of 1.86 children per families with children (.90 kids per US family, on average, if you count all families), when the scale of your art exists outside of the typical average, whether larger or smaller, people take note. They want the skinny.

Why?
There’s a good reason why, these days, I try not to talk too much about my personally notable stint as an assistant for the painter Chuck Close, despite its being a very high point in my incipient artistic journey, the wealth of lessons learned during my year and a half in Manhattan, and the importance of the relatively short episode in relation to where and who I am today, to say nothing of where I hope to go. It can come across as name dropping.
(When your past involves, say, schooling at Harvard or working in the White House or playing in the NFL – salient, generative experiences all, no doubt – you either need to travel in circles with others who’ve followed similar paths, and for whom your banter about the good old days isn’t out of place, or prepare to come across, to some, as egotistical and pretentious.)
Be that as it may,
today’s revisiting of the topic of scale involves things I heard Chuck say often enough, usually when he was giving a slide lecture about his work, that he’d plead with me to please not be in the room when he did so. (Having begun to have to do the same sort of thing with more regularity lately, I understand where he was coming from – it helps tremendously if you think your audience consists, in relation to your spiel, solely of virgin ears.) But I’d typically attend anyway, slipping as unobtrusively as possible once the lights were dimmed into the back row, because Chuck is an illuminating, informative, and entertaining speaker.
When one gives a talk about their journey and work often enough, certain lines become ingrained; memorized, even.
There were a few things I heard Chuck talk about often that had to do with the topic of scale.
He’d say that back when he was in school (Chuck attended the Yale University School of Art as one member of an extraordinary class including, among others, Jennifer Bartlett, Vija Celmins, Janet Fish, Nancy Graves, Robert Mangold, Sylvia Plimack Mangold, Brice Marden, and Richard Serra), often people made what was generally termed ‘station wagon art’ – that is, they made work on a scale that was just able to fit horizontally in the back of their station wagon; work they could relatively easily transport.
What you ended up with, therefore, were a lot of shows in which such mid-range sized paintings were so ubiquitous that they tended to cancel each other out.
In the same vein but using my phraseology, Chuck would say that
you can make an exquisitely lovely average-scale painting and people might pass it by. But make a terrible painting at an uncommonly large scale and viewers will interrupt their bee-line to the wine bar and take a gander.
Close has said that he tends to find both extremes of scale, large and small, engrossing. Close’s own work, from the 1960’s until today, tends to be both phenomenal and exceptionally large-scale, often on the order of 7′ x 9′.
However, a lot more consideration went into the considerable size of his work than simply an adherence to a philosophy of “go big or go home” than he typically pitches to an audience, and to reduce Close’s decision-making process, vis a vis scale, to simply a matter of capability would be a mistake.

Same goes for me and the considerations I make regarding scale with my work. It’s not simply a matter bigger being better.

Furthermore, if you’d ask him which paintings are his favorites, say, at the Metropolitan Museum of Art in New York, he’d tell you he passes right on by the shocking large scale stuff such as The Physical Impossibility of Death in the Mind of Someone Living. It’s work such as Johannes Vermeer’s average to small scale yet exquisitely beautiful, provincial paintings that arrests his progress, bringing tears, at times, to his eyes.

But the capability to do larger things, especially for sculptors like me, is something I’m looking forward to.