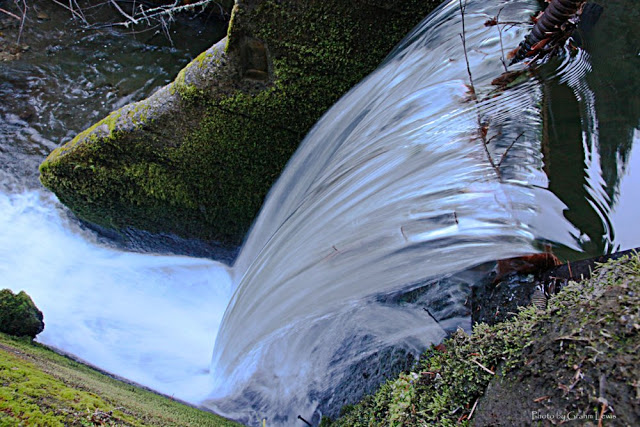 This year, in Colorado, the state in the US where I live, the overabundance of snowfall last winter and spring means that our water reservoirs are in decent shape for the first time in a while, as evidenced by my wife and I when we kayak on them every week or two – the current water line is only a couple of feet below the high water line at Upper Catamount, our new-to-us favorite on the side of Pike’s Peak, the prominent 14,115 ft. mountain to the west of Colorado Springs.

Less fortunately, but on the same general topic, last evening I hit the water line as I was excavating in a rented mini-ex as a part of the lead up to my new studio build, so this morning I’ll be shoveling mud out of the trench in preparation for the plumber, who arrives in just over an hour. So I thought I’d repost this water-flow centric post originally written in 2013, about a year into my resumption, after 23 years, of art creation, which also came to mind today due to receiving a nice letter from a reader yesterday.
I’ll bow out. Dig in, and I’ll be doing the same.
_________________________
In the years prior to my recent return to creating art I likened my creative life to a water reservoir, high up in the mountains. When asked when or if I planned on creating art again I would shrug. I didn’t know. But, I would also reply, if I did, it would be different than it was before. Not necessarily different in any overt, physical, stylistic way, though I wasn’t at all sure what form it would take – more about that later. Internally, however, it would be different.
When I boxed up my brushes in my early twenties it was in large part the natural result of being fairly dried up, internally. Like a reservoir whose inflow of water is perpetually lower than its outflow, I knew that however fluid the paint looked on my canvases, I was more like one of those hardened tubes from which you try to eke just a bit more usable paint.
Since that time, much had changed in my life, and so, when asked if I planned to ever make art again, my response usually included something like the following:
When I set art aside, it was in large measure because I realized the futility of expecting it to make my life meaningful. It’s impossible for the water flowing out of a reservoir to refill it, but that’s what I was hoping from my art back then.
While this is a bit of an oversimplification, I wanted my art, and everything that flowed out of it, to provide my life with meaning. If I ever make art again, I hope it will be more like the water that flows over a full reservoir’s spillway; it’s excess water. The reservoir doesn’t need it other than needing it to be a kind of release valve for what it can’t contain within itself. There won’t be any of that pressure I felt before. I won’t be grabbing my work by the lapels and demanding that it mean something it simply can’t. If I ever do make art again, it won’t need to mean anything other than what it actually is, if that makes any sense. Like excess water, it can simply go wherever it needs to go.
(Flashback to my high school years, and a camping trip I took with friends to Stanley Reservoir above the Air Force Academy. We’re walking along the edge of the water and John decides to hop over the wall and stand on the spillway, the sloping concrete ramp that allows the reservoir’s excess water to exit the lake and flow downstream. He says, “Huh. Last year this was really slipper…whoa! (as he begins to slide down the algae-covered ramp) Well, here I go!” Thankfully, after basically skiing off the spillway and out of sight for a moment, he pops back into view, unharmed. Kids those days.)
I have a rather ample playful side, and I recall thinking, a few years ago, that should I ever unpack my brushes, my work, unencumbered, would reflect it. I enjoy a lot of different kinds of work, but I assumed mine would be more on the lines of an H.C. Westermann, Mark Tansey, William Wegman, or Ed Ruscha. At least on a surface level, much of their work has the appearance of whimsy.
I like to think that one of the lessons I learned from creating diverse kinds of work for clients in recent years is that I’ve the ability to ‘speak different languages’. Going from making 7′ tall foam gnomes to miniature models to cabinetry to arena sets required different mindsets and made me wonder if I had a ‘native tongue’ anymore. Even now I could see myself working concurrently on two or more completely different bodies of work that would bear little or no resemblance to the others – perhaps one of them would lean toward camp. However, although it’s much too soon to pass judgement, what has transpired so far in my artwork has been anything but adolescent, surprising me most of all. It’s odd, but these days when I step through the studio door and don my work apron, I first shed the ersatz. For now, the path the stream is taking isn’t at all what I assumed it would be.
How about you? Are you “in the flow”, or is your reservoir tapped out? Are the margins in your life – the margins of time, energy, resources, etc., sufficient, or do you need to carefully step back off of the spillway and be refilled?