An Open Letter for Nan 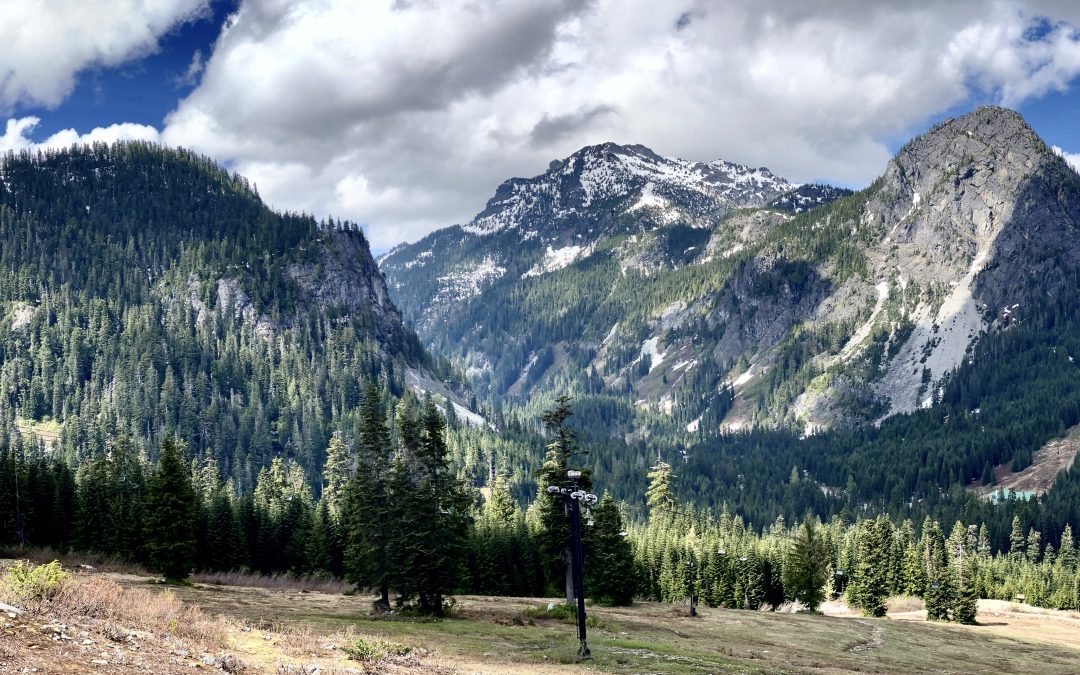 I can’t think of another time like the one we’re experiencing these days, so chock full of high highs contrasted by low lows. Of births – our first granddaughter, Evie, and our latest dog, Harper – and yes, of deaths. Of the successful completion of years-long projects – for you, decades-long, while for us both, looking forward to a number of meaningful and exciting projects to come. We’re dreaming. We’re perceiving. We’re proposing, and waiting on the One who disposes. But we’re not sitting on our hands.

It’s a bit like we’re where we were just two days ago, partway up a ski slope at the top of Snoqualmie Pass, only it’s summertime, and what little snow remains at the altitude we’re at currently is relegated to the stands of trees that border the wide open slope we’ve ascended with Harper.

It’s a sunny day, and the gentle breeze, in combination with a bit of sweat from the mild exertion, feels refreshing on one’s face, like it did recently, as I mowed the grass for the first time in many years (our four boys did most of the yard work when they were under our roof. I forgot how much I like mowing – especially the sitting on the porch, afterwards, with a small cup of ice cream, and viewing the freshly cut lawn. But I digress). From our high perch, one can see the last few miles of road and path that got us here.

We’ve never climbed beyond this point on the mountain before, but as you can see, there’s so much more altitude above us – why, we’re still in the trees, well below timberline. How I love the alpine landscape, yet higher. Further up, further in. In some ways, no one has climbed this mountain before. No one has experienced this trail, with these exact conditions, with exactly our fitness level, etc., before. We’ve followed behind others who’ve set examples for us, who’ve invested in us, who’ve created and maintained the trail, and we’ve used others’ paths dialectically, as cautionary tales; best to avoid that route; too risky.

As we’ve talked about, we know there will be new challenges to come. We see it in others, how the body, sooner or later, fails. How the mind does, in some cases, as well.

I still intend to go out like Moses; Deuteronomy 34:7: “Moses was one hundred and twenty years old when he died. His eyes were not dim nor his natural vigor diminished.” Fine figure of a man, yes? Yes? May it be so. May I be like the artist Wayne Thiebaud, who, at 100 years of age, still plays tennis three days a week! From my fingertips to God’s ears to my pickleball paddle to the open spot between my opponents. And the finish line in Napa, next March. But despite working out regularly and eating better, I know I can make no assertions of that eventuality. Maybe it’ll be like I’ve joked of late, while we’re in the car together, holding hands, feeling for all the world like we’re in some sort of blessed bubble – not the Covid bubble we’ve managed to largely extricate ourselves from – suddenly, I pantomime that the car goes out of control, flips a half dozen times, and that’s all she wrote: we have no guarantees that that’s not in the cards. (Sounds morbid, I know, but it’s done in a lighthearted way, and Nan laughs along with). But I don’t think so. Not as I sit here at 3:24 am, with Harper finally winding down and laying down beside me. No, but eras do die. And new eras are born.

We’ve closed the chapter on who we were, back before we were recently blessed with the designation “grandparents” – Nana and Papa. That era has “died”. It’s ended. It’s over. Will and Hannah have similarly passed through states. Now they’re parents. Evie’s passed through states. She was in utero, in a floating, liminal state not unlike how the current one feels to and in me. Now she’s been ushered into a new state of being. The invisible made visible. The intangible made flesh. Now we see her face to face. Soon, she’ll realize that’s what she’ll be doing for the rest of her life. Facing life’s challenges. Looking squarely into the eyes of possibilities, of challenges. Things to discover, lessons to learn.

What will possibly be born into our lives in the next few days, weeks, months? I can’t make any predictions, but as you know, I perceive He is at work:

Isaiah 43:19 – “See, I am doing a new thing! Now it springs up; do you not perceive it? I am making a way in the wilderness and streams in the wasteland.”

That’s been our prayer. That we would perceive it, that He would do it. That we would walk into it, beyond this threshold we’re in at the moment. That we would grab life, like a bull, by the horns and go for a ride. Contend with it. Live it. View new vistas. Take more risks. Drill deeper into our callings. Push out against that amorphous boundary of extant culture and co-create something unique and new. Something that uses all the skills and abilities we’ve been given. Something that creates a greater margin for those who follow. More of a range to freely graze in.

Or, as I view our property from the median, where Harper’s been relieving herself of late, stay right here. That wouldn’t be half bad, either. Why, it’s been our home for thirty years now. Things are greening up, and as I said, the lawn’s been freshly cut. The porch has been rinsed off. The car’s been washed and vacuumed. Ready to head to the Pacific Northwest here in a bit. Ready to wind its way up a mountain pass in the San Juans, to a cabin at 11,000 feet. Ready for new adventures.

But hey, what if we keep climbing as long as we’re given the strength? What if I end up on top of some unknown mountain, like Moses, literally and figuratively? It’s so much more exciting once you get above timberline. Electrifyingly so, at times.

I’ll come down off the mountain with just a bit of whimsy. I remember what I wrote to you, back in Colorado, from the studio in New York, back in the day. I know how I filled your head with visions of grandeur. How we’d have a place in the high country. We’d this. we’d that.

In particular, I’m sorry about the pig farm, but it turns out that while an occasional piece of bacon’s just fine, I’m not all that interested in raising porkers. Hope you don’t feel like that’s bait and switch.