A Place Where No Cat Is Safe 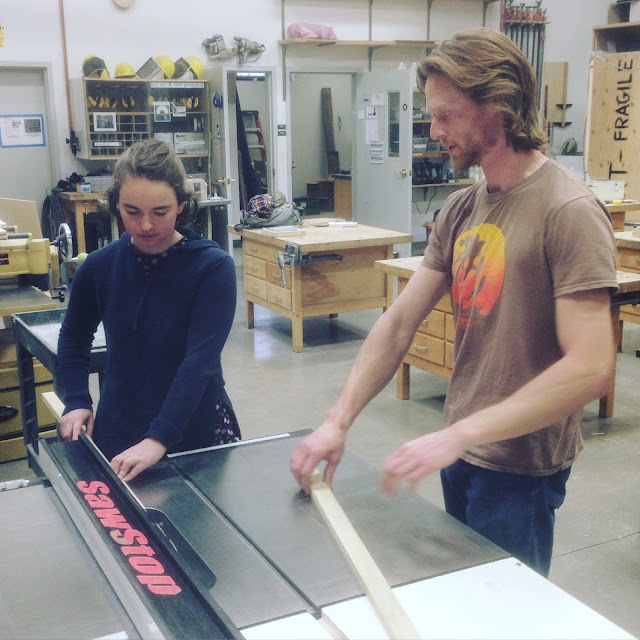 Handing off the baton, as we’ve all heard, is the moment most fraught with peril in a relay race. I was probably thinking along those lines when I wrote the following ones just prior to leaving my shop supervisory position at the Colorado College last March. However, I can happily report from my periodic check-in’s with Niels, my predecessor, all’s well that starts well.

Well, if yesterday was any indication, the shop at the college will be just fine without me.

For the uninformed, I am leaving the Colorado College in one week’s time, and a recent CC alum, Niels Davis, will be taking on my shop supervisory mantle. Yesterday was the first day where he “shadowed” me. Five more to go. Still lots to learn, grasshopper.

I hope to leave Niels with a much fuller grasp of the job, both from a technical point of view as well as a philosophical one, than I was. Of course, he’ll be free to overlay any of the position’s stated duties with his own philosophies; his own m.o., if he wishes, and I hope he does.

As I told him, while the shop won’t belong to him per se, I feel like he should know that he’s more than simply a placeholder until he leaves. Of course, considering the space one’s own in a kind of territorial, me first way can cause plenty of problems, but that’s not what I’m talking about this morning.

I want him to realize that, for however long he’s installed, the college and the Art Department have in effect said “you the man”. That he’s been given the authority to make the myriad moment-by-moment decisions which will convey, both singly and when added to all the rest, the flavor of the shop. Its atmosphere. Its character.

So yeah, Niels, in a very direct way, your personal character as the primary caretaker of 3D Arts Land – of course, to the degree that it’s allowed within the rules you’ve been asked to uphold – will become the character of the shop. Your demeanor. Your abilities. Just like Disneyland reflects the character of Walt.

If you’re similarly a “can do” person, the shop’s character will reflect it. If you’re not a “people person”, people will know. The very walls of the shop will exude unfriendliness and, as one consequence, less people will darken the doors.

It should go without saying that that’s not what the Art Department wants. It’s ultimately not what you want, either, even though, being human, there will be times you’d really rather not talk to anyone.

But, such times, if you let your emotions dictate things, while you may enjoy more peace and quiet in the short term, in the long run, well, you might not have such a long run. That’s not what we want now, is it?

3D Arts. Scott and I renamed our building that years ago. I like it, in part, because it reminds me, in many ways, not to think one-dimensionally. Let me try to explain. Here’s something I find quite interesting:

Without knowing it, students will tell you what they’re all about underneath the surface via surface means. For instance:

In the way back files, one particular student would often come to me wanting to know how to join two or more things that simply wouldn’t join. Now as you probably already know from Bogdan’s project yesterday, as well as from your climbing, there are plenty of creative ways to skin a cat. (As an aside, here’s the question you’ll hear more than any other: What’s the best way to…??? Students always want to know the best way to do something when there are, as I said, multiple good solutions. But often, one solution will, given the parameters of time, availability of resources, limitations of skill, etc., percolate to the surface. It’ll be your job to suggest such solutions at times. Other times, you’ll need to wisely allow the student to stew in their own as of yet perhaps undiscovered creative juices. Sometimes – often – the student will be able to figure something out without your help. Especially the closer they get to their senior year thesis shows, you will need to kick them out of the nest and let them try their own wings on for size, as it were. It’s a balancing act. Again, like climbing.)

Anyway, despite knowing that perhaps 99.9% of the time, every problem has a solution, this particular student, time after time, brought me things that simply couldn’t be solved. It was frustrating for me, with my sincere desire to assist, to continually respond, after careful thought, “I’m sorry, but that’s simply impossible.”

Eventually, I delved deeper into this student’s personality. One day they divulged how out of place they felt at the college. They didn’t fit in with the culture. They were a fish out of water. Irreconcilably so.

Had I known what I’m imparting to you today, it would have helped. Very often, you’ll gain access to the student’s personality through the way they approach materials. Through the kinds of projects they want to tackle.

And perhaps, just perhaps, you’ll find a way to divulge this to the student, and be a trusted voice they’ll really be able to hear – a key that helps them discover who they are. How cool is that?

Take the other third of the dream team for another example – Mr. Weaver himself.

Look at the scale of the work he’s doing. Scale’s not the only indicator of such things, but it’s a huge clue as to Hank’s internal makeup. 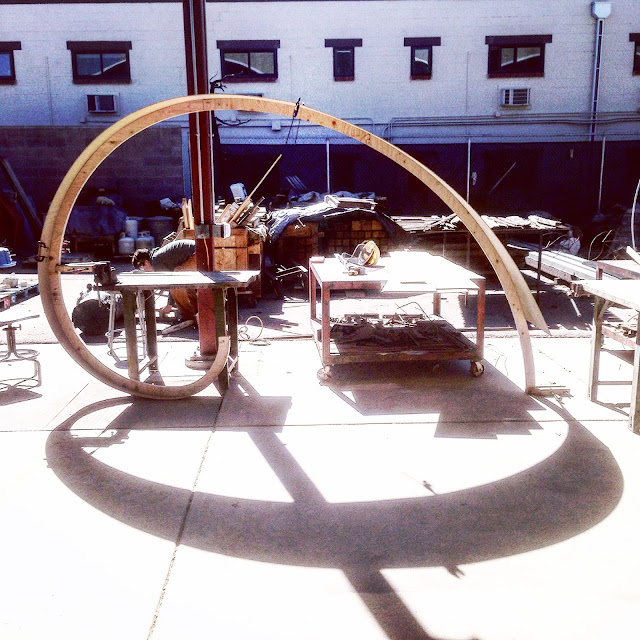 He’s bold. He’s ready for a challenge, and not just in theory. He follows through with the daily realities of such theoretical desires. He works hard. (He also, by all accounts, plays hard.) At times, when such brashness comes in contact with “the inherent obstinacy of raw materials”, “the law wins” – things snap. Not everything works.

But with such students, if they sense that you think they’re fools for trying to do hard things – say, because you yourself are jealous of their incredible abilities or how close they’re willing to push the envelope, you’ll be doing them a major disservice. If you don’t let them go there because you can’t go there, you’ll be sending the wrong message.

It’ll be your job, to a degree, to wisely determine the viability of students’ sometimes ill-conceived wishes. The Block Plan also determines much, of course, and faculty ultimately give their blessing, or don’t, to the directions in which students want to go. But you have an important role to play as well, and although you may want to disallow ambitious projects because you know that to a certain degree you’ll be a co-parent of that baby; if you categorically deny things to simplify your life, that’ll be the shop’s character. It’ll be the place where some safe, easy, risk-less things are possible.

Not a place that conveys that all things (with the exception of the .01% that aren’t) are possible. A place where no cat is safe.

On the other hand, you’ll always need to keep an eye on students’ eyes, ears, fingers, etc. You’ll be expected to have the wise judgments of an engineer with respect to, say, how much weight those steel rods will support. Will they support a body? On rockers? 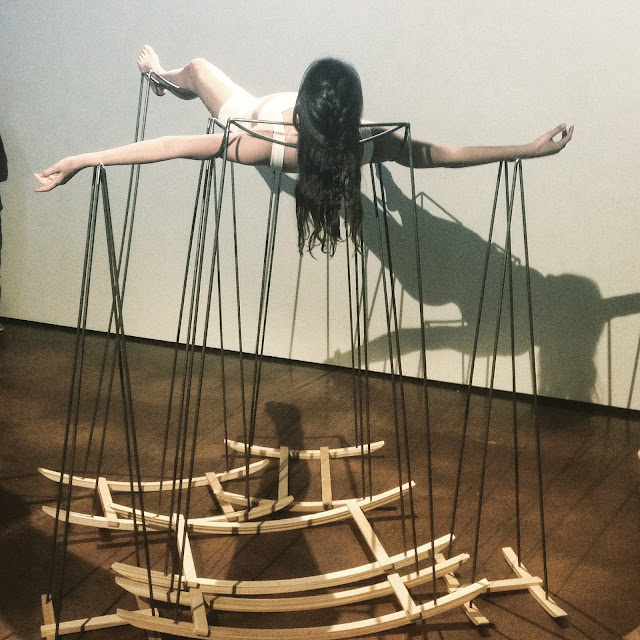 I could go on and on, but just a couple more lessons this morning:
Be direct, when directness is called for.
Years ago, I recall a student who, when I was explaining each next step in the systematic operation of building a canvas strainer, would nod while looking away. Odd, I thought, but perhaps just an idiosyncratic thing. (I hoped – I didn’t really enjoy calling such things out directly).
Then they’d put the poplar pieces together incorrectly and have to start over.
These days, if it looks like a student isn’t listening, I simply stop and, once I have eye contact, ask them to. “Excuse me,” I’ll say, “I really need you to pay attention.”
That was the problem I was having myself, especially last year. Like James Taylor having to sing “Fire and Rain” for the one millionth time whenever he’s in concert, you’ll have to engage your mind and find something new and interesting in the often frustratingly rudimentary problems you’ll be asked to solve. That’s when I first started really wondering how much longer I could stay at CC. I would look around and wonder if my time was well spent. I’d think of all the art I could be making. I was finding less and less fulfillment in the “art of teaching”, and was ready for a bigger challenge. Maybe ultimately a failure to see what was right in front of me, but maybe not.
Finally, and perhaps most importantly, I want to impart a lesson that will be more valuable to you, and students, than any other I can think of. One that could transform your own life in ways inconceivable to you right now.
Be (wisely) vulnerable. Especially, it seems, with males, if your words and actions convey that you’re the boss; the Alpha Male; the unquestionable highest authority, the walls will go up and no real communication will be able to occur. Believe me.
If, however, you admit, say, during a demo, that, being new to all this, having to articulate the process while doing it is a bit nerve wracking and may come out somewhat disjointed (yet while you continue to display the authority of the position), all around the room the walls will go down a bit. Masks will come off.
If Niels can admit he doesn’t know everything, I don’t have to pretend I do, either, they’ll say, perhaps so deep within that they don’t even realize it. I can be just a bit more real. Maybe. Don’t know yet. I’ve been burned before when I’ve trusted others with such information.
But this Niels fellow… I might just be able to trust him…
I’ll leave you with a few concluding thoughts.
I’ve said that this job is about so much more than the skills you’re imparting, skills that the students will hopefully retain. It’s about something deeper. Here’s the thing – who you are will, to whatever degree, not only be reflected in the space, but in the students themselves. To one degree or another, the students themselves will reflect who you are.
It’s a crazy thought, but bears repeating a third time (something you’ll have to do often):
While they’re creating all sorts of crazy things, you’ll be recreating yourself in the students themselves, to a degree. And that’s just fine with me.
Once again, the ever gracious students at CC will reciprocate. They’ll remain with you. In fact, they’ll never leave you alone.