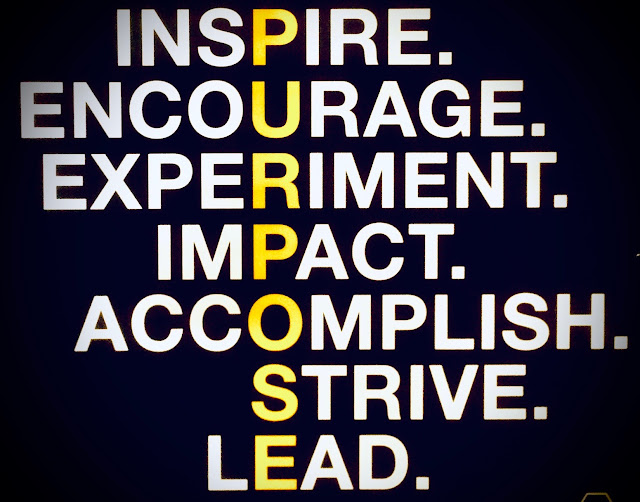 I’m not creative. If I’ve any gifting at all, it’s my hand-eye coordination, and that’s different than creativity. If you know how to make things look “correct”; if you can reproduce something, you can fool people into thinking you’re creative, when really, you’re closer to a human copy machine.

I’m a halfway decent copy machine, is all.

If I delivered that line once, I delivered a thousand times. It was standard fare for decades. And I didn’t just say it – I believed it.
Now, I know differently.
Now I know creativity isn’t like the ability to keep a full head of hair – bestowed or not. (For me, lo siento, not.)
No, it’s something cultivated. Something gathered up. Something asked for, something sought.
Something like a flower that, given the right combination of nurturing conditions, slowly, ever so slowly opens. 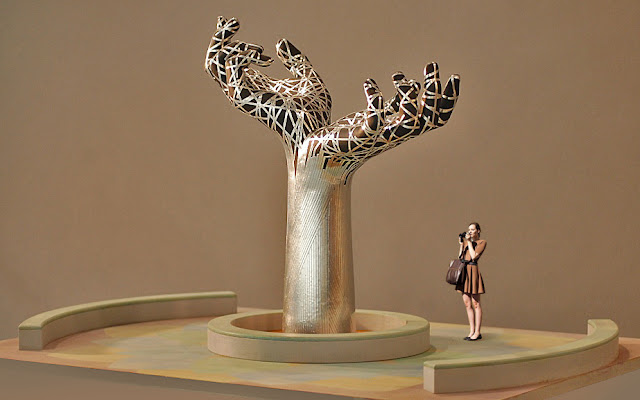 Or like losing weight, for most of us. (Evidently not an issue for the female model in my scale model from an unrealized public art piece.)
It’s illusive.
Insubstantial as flash paper.
It is, to quote Winston Churchill,
a riddle,
wrapped in a mystery,
inside an enigma.
But, as with losing weight and thereby achieving greater physical health, with persistence, a greater flowering of creativity can be gained.
I won’t spend any time today talking about how to cultivate creativity in your life. If you’re interested in the nuts and bolts of that, read my post “How To Create.”
No, today I just wanted to share one nugget of truth that jumped out at me yesterday while listening to Reid Hoffman’s interview with Brian Chesky, Co-founder and CEO of Airbnb, in Episode 1 of Masters of Scale, a podcast I recently discovered that already, only after having listened to three episodes, feels like I’ve uncovered a gold mine.
I encourage you to subscribe to the podcast, and to listen to this particular episode, but before you do, here’s a portion of the interview, joined in progress, where Brian Chesky explains the period of time early on when he and his then small team were focusing on boiling an optimal trip experience down to its most basic elements, in order to take the knowledge gained, hopefully scale it, and create Airbnb experiences that would blow traditional travel journeys, whether to another city or another country altogether, out of the water:

HOFFMAN: Notice here how quickly Brian switches back to the analytical mindset. He can extrapolate from a single journey to a list of essential ingredients. Here is his systematic breakdown of the perfect trip.
CHESKY: When you first go to a city, you need a welcome event within the first 24 or 48 hours where you’re around people. When you land, you need to get acclimated to the neighborhood. By day two or three you need to have a challenge out of your comfort zone. If you do not leave your comfort zone, you do not remember the trip. If you can belong out of your comfort zone and something new happens to you, then there’s going to be a moment of transformation where the person you were in a small way dies and a new better version of yourself is reborn.
Now this is the narrative of every movie you’ve ever seen. A main character starts in an ordinary world. They leave their ordinary world. They cross the threshold to a new, magical world where all these obstacles happen and they overcome something. They call it the hero’s journey…
Now, I don’t want to get bogged down into the hero myth pattern studies as popularized by Joseph Campbell, influenced by Carl Jung.
What I want to do now is to use what Chesky just said about the perfect trip to undergird what I talked about yesterday, if you recall. What? You don’t?
Here’s a refresher:
“Workmanship of risk” is a well-known concept advanced by David Pye, Professor of Furniture Design at the Royal College of Art from 1964 – ’74, and perhaps the most popular craft theorist of the twentieth century.
It regards the risk involved in work that’s done where the quality of the finished product depends on the judgment, dexterity, and care of the maker – where the quality of the result is continually at risk during the work’s creation – as opposed to work of a more, shall I say, automated, or predetermined, kind, a.k.a. “workmanship of certainty”.
Now, I’m no craft theorist, which is why I can unapologetically put my own diacritic spin Pye’s concept:
There’s a similar idea involved in living the life of the self-employed craftsman or artist, where day to day decisions effect the resulting quality, and perhaps also the continuing possibility, of one’s lifestyle.
There’s an inclination within many creative people, and for sure within me, that involves such a “lifestyle of risk”. A predisposition toward living the type of life where one’s existence, health, continuance, and advancement hinges directly and primarily on one’s own personal talents, abilities, craftsmanship, and decision making, both in the macro and micro sense, day in and day out.
Ok, so I want to overlay what Chesky said about the perfect trip on my concept, shamelessly borrowed from David Pye, of a “lifestyle of risk.”

In life, sooner or later you need to have a challenge – you need to leave your comfort zone.

If you do not leave your comfort zone, your life, both in the macro sense and in the day to day,

If you leave your comfort zone, then there’s going to be a moment of transformation where the person you were in a small way dies and a new better version of yourself is reborn.

A couple of days ago, over breakfast with an artistic friend in Wooglin’s Deli, which will, later this week, temporarily close (in order to be “reborn” in not one but two locations), I was asked a number of questions about the artistic journey that’s continuing to transform my life since that creative side of me was similarly “reborn” in 2012.

At one point, as I scrolled through some of my more recent @artirado1 Instagram pics to show him my work, he saw my piece “Lacuna”, which was, at the time, hanging in the Colorado Springs Fine Arts Center. He then asked me what the first piece of art was that I created after the 23 year period when all my prior artistic hopes and dreams had been shelved. 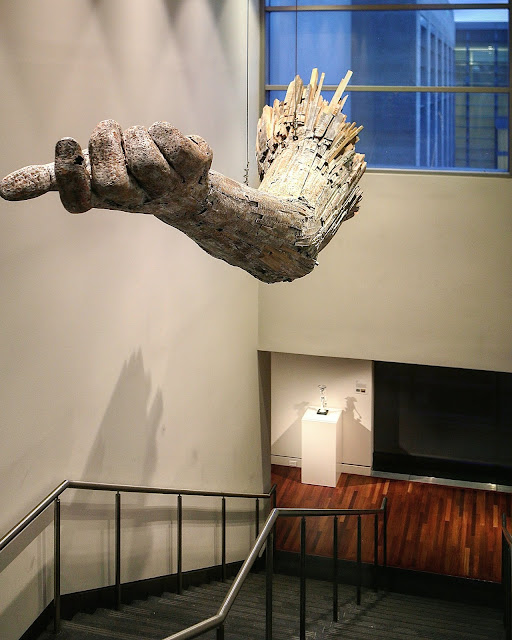 I told him that was the piece. The first piece I completed after my return to art.
He seemed as puzzled as nearly everyone who witnessed the piece’s creation had been.

The question I got over and over throughout 2012, whenever anyone visited my studio and looked at the piece in progress, was, “So… where is this going?”

The assumption seemed to be that, no doubt due to the piece’s scale – which, being built in my tiny “one butt studio” at the time, seemed even more outsized than it was – I must have had an intended location in mind. Someone – some venue – some exhibit must have requested me to make it. 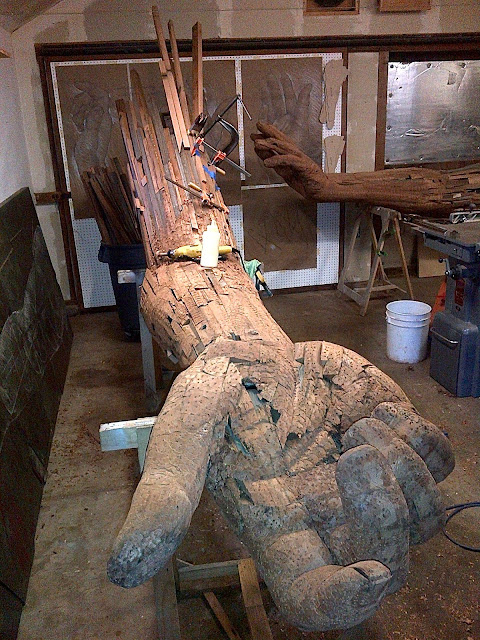 My response, delivered with a slight smile?

It’s going to the Metropolitan Museum of Art.

If they don’t want it, it’s going to MoMA.

If they don’t want it, then the Guggenheim.

I’d end my short, tongue-in-cheek spiel with, “…and if my wife doesn’t want it in the house, it’ll go in the landfill, which is where the reclaimed wood I made it from was headed anyway.”

And I’ll end my not so short spiel today with the following:

While no one from the Met has yet come a calling, my intentions for my work and my life are increasingly, well, increasing.

Increasingly, I want to explore the limitless land of creative possibility. I want to think epic, far-out, reach-for-the-stars thoughts
like will.i.am talks about in what is possibly the most personally impactful interview I have heard in years.

As boiled down by Reid Hoffman, will.i.am epitomizes the idea that you should never settle for a big opportunity when you can leverage it into something epic.

Check it out and catch the vision. Because creativity isn’t a zero-sum game. It’s everyone’s birthright.